Candidates were evaluated by several criteria, including extensive technical experience as a player and manager, an understanding of the American system, complemented by experience in international soccer and a deep appreciation of the what it means to represent the United States.

After successful careers as a player and an executive, Stewart fits the bill on all fronts. The midfielder spent 18 seasons in the Netherlands and the U.S. as a player, and 12 years in technical leadership across the two nations. One of just 17 players to earn 100 caps with the MNT, Stewart took great pride in representing his nation and he will now help guide the USA’s next generation.

REPRESENTING THE RED, WHITE AND BLUE
The son of a U.S. serviceman and Dutch mother, Stewart represented the USA a total of 101 times from 1990-2004. He recorded 17 goals and 10 assists during his 14-year international career, and stands as one of only 11 MNT players to play in three different FIFA World Cups. For his outstanding achievements, he was inducted into the National Soccer Hall of Fame in 2011. 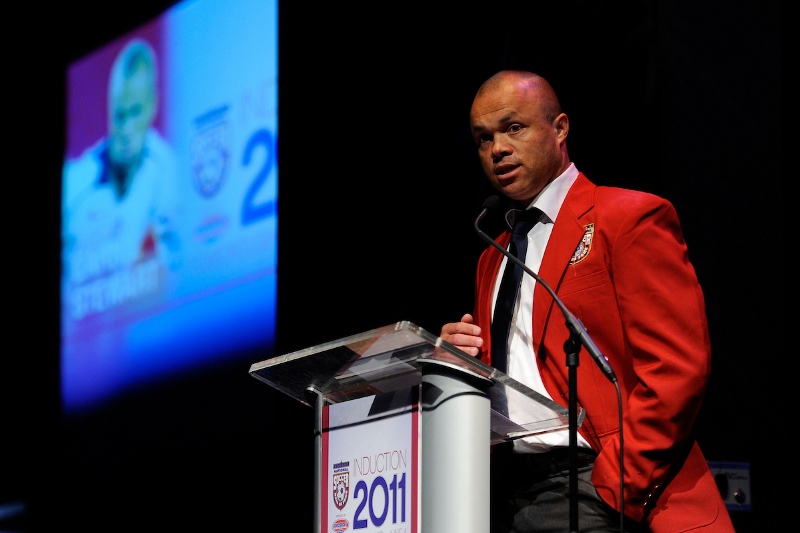 At the 1994 World Cup, Stewart scored the game-winning goal in the USA’s first victory at the tournament in 44 years, a 2-1 triumph against Colombia at the Rose Bowl in Pasadena, Calif. He appeared in every game for the MNT at France ‘98. The following cycle, Stewart’s eight World Cup qualifying goals earned him recognition as the 2001 U.S. Soccer Male Player of the Year. At the 2002 FIFA World Cup, Stewart captained the USA in its 3-2 upset of Portugal, launching the MNT’s historic run to the quarterfinals.

INTERNATIONAL CLUB CAREER
Born in Veghel, Netherlands Stewart kicked off his professional career in Holland with second division club VVV. Success in three seasons in Venlo propelled a move to the Eredivise with Willem II in 1990. In his first season with the club, Stewart scored a career-high 17 goals. He spent six seasons in Tilburg, becoming a MNT regular in the process.

The midfielder continued his consistent goal scoring at NAC Breda, and after 15 seasons in the Netherlands, headed overseas to M.L.S. He spent two seasons at D.C. United, helping lead the team to the 2004 MLS Cup before finishing his professional career back where he began at VVV. Stewart’s 115 goals in the Dutch leagues make him one of the most prolific U.S. goal scorers abroad of all time.

FROM FIELD TO FRONT OFFICE
Stewart went immediately from the pitch to being a soccer executive. When injury hastened his retirement from VVV, he was offered the club’s Technical Director position and promptly led his first and final professional playing home to its best finish in more than 10 years during the 2005-06 season. The success saw him move to another former home, NAC Breda, in the Dutch Eredivisie. In Breda, Stewart took a club on the brink of relegation in 2006 and guided it to mid-table a year later before lifting it to its best finish since 1956 in 2007-08.

From there, Stewart made a move to AZ Alkmaar, one of Holland’s most well-known clubs. In five seasons, the team qualified for European competition four times and won the KNVB Beker in 2013. After a successful spell in the Netherlands, Stewart returned to the USA as Sporting Director for Philadelphia Union in 2015. The club made its second-ever playoff appearance in Stewart’s first season, and he has built the team’s academy into one of the league’s most productive set-ups.

GENERAL MANAGER ROLE
After his approval by U.S. Soccer’s Board of Directors, Stewart becomes the MNT’S first General Manager. He will assume the role on Aug. 1, 2018, and his first order of business will be to oversee the search to hire a new head coach. The process will end with a recommendation to the Board of Directors for final contract approval.

The MNT coaching staff will report to Stewart, who will in turn report directly to U.S. Soccer CEO Dan Flynn. The General Manager will instill and supervise the long-term vision for the program, including the overall player pool, style of play, National Team environment and culture, scouting and more. While focusing primarily on the MNT, Stewart will also work with the Youth National Team program to foster integration.