First and foremost, to provide educational, competitive, fun and nurturing environments that will accelerate the development of talented players to their maximum potential, while setting them on a path to one day potentially represent the U.S. Women’s National Team.

Watching players grow through the YNT programs to represent the USA in World Cups and Olympic games – a path that almost every current U.S. WNT player has followed – is extremely satisfying for all the coaches and staff members who are involved in the process.

Along the way, winning games and tournaments is also a ton of fun.

And even though the USA’s Youth National Teams have been wildly successful during their long history, the past two years have been especially fruitful. Of course, the youth club teams of all the players in the YNT pools play a critical and invaluable role in developing players away from the National Team environment, which leads to another responsibility of the YNTs: liaising with the clubs to make sure they have a concrete understanding of what it takes for players to play internationally.

Over the past two years, when those players assemble and put on the U.S. Soccer crest, the results have been especially stellar.

From the start of 2017 to date, the USA’s six youngest Women’s and Girls’ Youth National Teams – the U-15s, U-16s, U-17s, U-18s, U-19s and U-20s – have played 84 international matches and have a lot to show for it. The entire program has gone 59-11-14 during that period while winning eight different tournaments. That’s a 78 percent win percentage and eight trophy lifts. Some of these competitions have come while “playing up” against older competition, especially for the U-18s and U-19s.

“Our coaches are extremely focused on coaching age-appropriately, teaching our style of play in attacking and defending, and playing older opponents as often as possible,” U.S. Women’s Youth National Team Director April Heinrichs said. “Quite honestly, we’re less focused on results than in the past and more focused on selecting good soccer players and how to teach how we want to play.”

The U-17 WNT, whose only loss of this cycle came in a wild 5-4 contest away to China in July of 2017, beat Japan three times this year, and recently downed Mexico to win the 2018 Concacaf Women’s U-17 Championship. The U-20 WNT has yet to lose in 2018, and even picked up wins against the U-23 sides of Sweden and Italy. Although the U-20s were edged by Mexico in penalty kicks in its Concacaf championship game, they’ve beaten the U-20s from France, England and Germany over the past four months which shows that both the U-17s and the U-20s are rounding into fine form ahead of their respective World Cups later this year.

A sign of the health of the USA’s Youth WNT programs, which is even more important than wins and losses, is the number of Under-20 aged players who have already seen time with the full National Team.

“By design, we have a large number of players ‘playing up’ with an older Youth National Team, and we are trying to schedule games against older national teams as often as possible,” Heinrichs said. “We think playing up against players born a year or two older will challenge our players during their formative development years and accelerate their individual development.”

To that end, the YNT programming has often seen players born in ‘04 playing with 03s, and 03s playing up with 02s. The U-17s, whose age cut-off for the upcoming World Cup is players born in ‘01, started four players born in ‘02 in the final of the 2018 CONCACAF Championship. The U-20s have featured four players born in 2000 during its entire cycle, despite it being a 1998 birth year team. Those four players played a major part in helping the U-20s beat Germany, France and Haiti at the recent tournament in France, and one of them, forward Sophia Smith, is the team’s leading scorer. 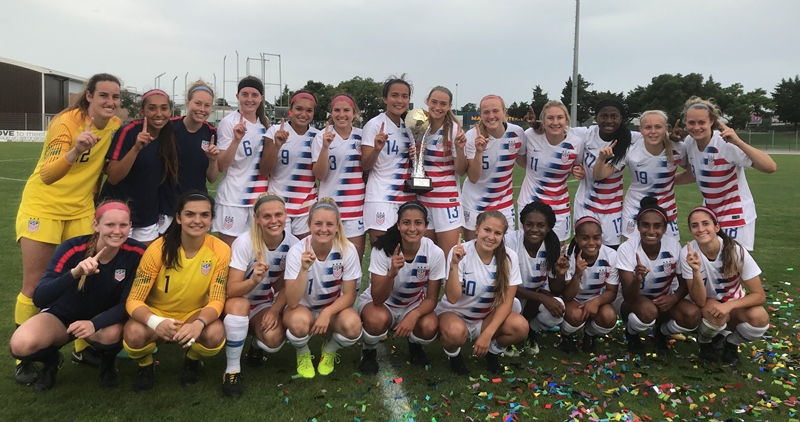 The senior WNT has two regulars who are age-eligible for the 2018 FIFA U-20 Women’s World Cup. Forward Mallory Pugh, who played in the 2014 and 2016 U-20 Women’s World Cups, turned professional last year and has become a consistent starter for the USA as well as one of the team’s most dangerous attackers. She recently turned 20. Defender Tierna Davidson, 19, has started her first seven WNT matches in 2018 and is well positioned to earn a spot on the USA’s roster for the upcoming Women’s World Cup qualifying tournament in October.

In addition, although none have yet been capped at the senior level, current U-20 regulars, forward Ashley Sanchez and Smith, and midfielders Jaelin Howell and Brianna Pinto, have all seen training time with Jill Ellis’ team in the past two years.

That’s no small feat considering the depth of the player pool, which is fed by the NWSL, the college ranks and the U-23 WNT, as well as the fact that the USA is currently ranked #1 in the world.

It should also be noted that a critical factor in the ability to play so many international matches – matches that are vital in the development of young players – is a major investment made by U.S. Soccer in its Women’s and Girls’ Youth National Teams. That kind of support is matched by only a few countries around the world. Since the start of 2017, U.S. Soccer has programmed almost 80 training camps and events for its youth female players.

“We are a nation dependent on our resources, and without international games we would not be accelerating player’s development or winning games,” Heinrichs added.

Also playing an important factor in the success has surely been the synergy between the “teams of coaches” working closely together at the U-14, U-15, U-16 and U-17 age groups, and in the U-18, U-19 and U-20 age groups. They are serving as assistant coaches, attending each other’s events, sharing information and discussing player movement against the backdrop of what is best for each athlete. They are approaching the development of each player and team in a totally holistic manner.

“We have two teams of coaches working together to accelerate player development and to layer in our style of play, starting with our U-14s and moving up to our U-20s, and hopefully one day to the WNT,” said Heinrichs. “We’re starting to see the benefits of years of pursuing international games for all our teams and years of integration across all our teams.” 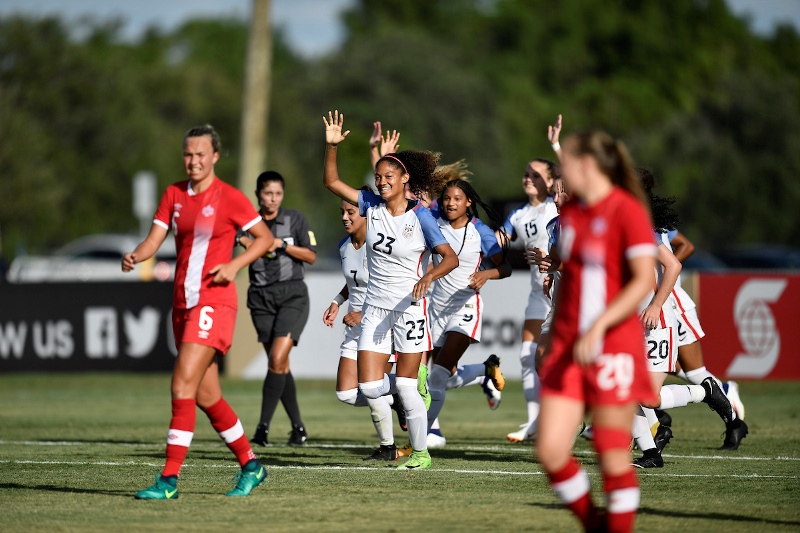 Reilyn Turner celebrates after scoring the winning goal vs. Canada in just her second cap for the U-17 WNT.

A good example of this is forward Reilyn Turner. She is a player who had seen most of her training time with the U.S. U-16 GNT and was a last-minute replacement for an injured player before the 2018 Concacaf Women’s U-17 Championship resumed in Bradenton, Fla., in early June. Turner scored in her first U-17 cap against Bermuda (plus notched two assists), and then scored the game-winner in her second game, a 1-0 victory against Canada that helped the USA finish atop its group.

“Reilyn jumped right into a team she had never played for and understood our defending and attacking expectations and contributed to the successful qualifying run,” said Heinrichs. “A player’s transition from one team to another can be nearly seamless. It’s a huge team effort by our coaches to commit to our beliefs and work together on a regular basis as all our players and teams deserve the best support U.S. Soccer can offer.”