The FIFA World Cup is headed back to North America! Here are five things you should know about the 2026 FIFA World Cup, to be hosted jointly by Canada, Mexico and the United States:

What Happened in Moscow

The United Bid of Canada, Mexico and the United States, was awarded hosting rights for the 2026 FIFA World Cup during the 68th FIFA Congress on June 13, 2018 in Moscow.

Together, the United Bid garnered 134 of a possible 203 votes from FIFA Member Associations to win the hosting rights ahead of Morocco.

When and Where It’s Happening

Though specific dates are still to be determined, the 2026 FIFA World Cup will take place in cities across Canada, Mexico and the United States during the summer of 2026.

It will mark the first time the tournament has been hosted across three nations and just the second occasion that countries have co-hosted the competition, following Korea Republic and Japan in 2002.

The United Bid included 23 candidate host cities, each of which has pre-built, world-class facilities to offer FIFA maximum flexibility and leverage when making the best choice for where and how to stage the competition.

A total of 16 cities are expected to be chosen to host matches during the tournament. FIFA will decide the final list in 2020 or 2021. Many other cities and venues will also be involved, making this a truly North American event from coast to coast.

See a map of the 23 candidate host cities below: 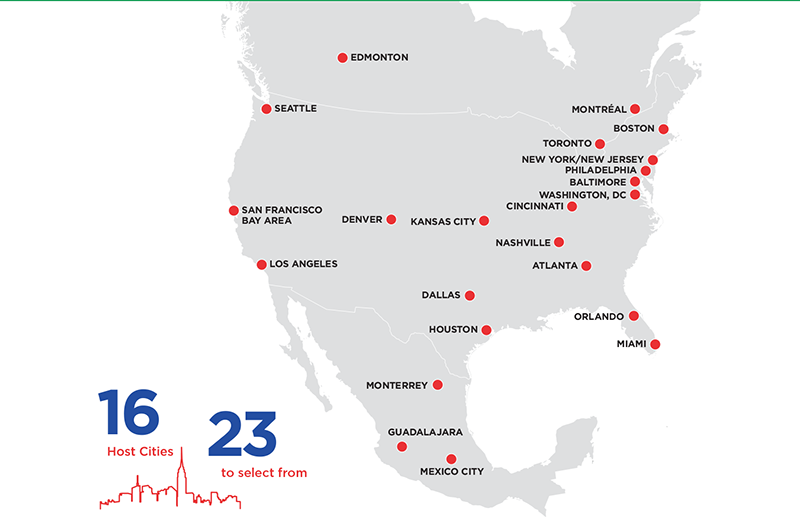 The 2026 FIFA World Cup will be the first to host an expanded field of 48 teams. Just as there are more teams, the competition format will also expand from a total of 64 to 80 matches.

Under the current plan, the United States will host 60 of those matches, while Canada and Mexico will hold 10 each.

Now that we have successfully won the right to host the 2026 FIFA World Cup, the three federations can begin working with FIFA on delivering the best World Cup in history. There are eight years to build excitement, energy and awareness about the first Men’s World Cup to be hosted in North America in 32 years.