DAVIES: "With pride and bragging rights on the line, you will have the chance to become a part of history."
Charlie DaviesSeptember 10 2018

Tomorrow you will take the field to play in one of the biggest rivalries in all of sports: USA-Mexico. This is it! This is the game that we all dream of playing in, a chance to make a statement to Mexico and everyone else that we are the best. For most of you this will be the first of many battles with El Tri, and it’s important that you set the tone for years to come. Putting on the jersey to represent your country is a special honor and a privilege that few players get a chance to experience and it should never be taken for granted. With pride and bragging rights on the line, you will have the chance to become a part of history.

It’s a history that runs deep. Generations and generations of players have sacrificed blood, sweat and tears during these matches. Whether it was in 1997 when the U.S. got their first result in Mexico, the 2001 squad who coined the “Dos a Cero” phrase, or the biggest win to date in the 2002 World Cup Round of 16, the desire, commitment and intensity must continue. The groundwork has been laid and now it’s your time to add to the legacy.

I was just 10 years old when I went to see the U.S. Men’s National Team for the very first time. It just so happened to be a World Cup Qualifier against Mexico. The combination of love, support and passion for our country and for the team was contagious and had a lasting impact on me. It was my dream to play in this game, and I would spend the next 13 years chasing it. What I saw and felt that day inspired and motivated me throughout my entire journey to becoming a professional. See the power that you guys have? You have that ability to do the same to millions of kids around the country who will be watching your game tomorrow. I promised myself that I would score one day against our rivals and I would work hard and tirelessly until it happened. 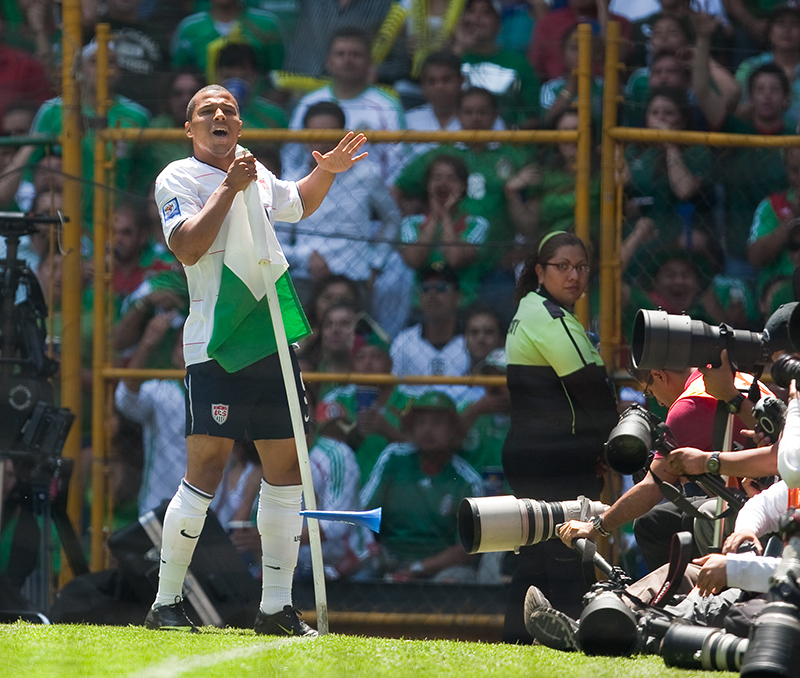 That day came in 2009, when we battled Mexico in a World Cup Qualifier in their legendary fortress that is Estadio Azteca. In the ninth minute, that dream I had as a little boy became reality. I raced in behind and scored a curler to take the lead. As I ran to celebrate, the 100,000 El Tri supporters fell silent. It was the only instance in the entire 90 minutes that I could hear the American fans who had braved the environment to show their loyalty. As I dodged batteries, coins, and bottles being hailed from the stands, the feeling was euphoric. This was undoubtedly the best moment of my career.

You have a unique opportunity as a young team to grow together and form bonds that will last a lifetime. The U.S. MNT is a family, a brotherhood. You are on your way to becoming that cohesive unit, playing for the country and everything it stands for and doing it together. Be confident, play your game, never back down, take your chances, and be proud. The American spirit is strong and I know you guys will go on to do great things. Your country is behind you. Get fired up and fight for your lives out there! And most importantly, enjoy every second of it.