With the Kickoff Series meant to provide a rising group of MNT players with tough tests right off the bat in the new World Cup cycle, perhaps there is no greater opponent to begin the fall schedule than five-time World Cup champions Brazil.

Ahead of USA-Brazil, here are three tidbits of history relating to the teams' all-time series.

Let’s start with some context. During its 102-year history, the U.S. MNT has met Brazil on 18 occasions. It has lost 17 times. This isn’t meant as a discouragement to U.S. fans for the upcoming friendly, it’s just the reality most teams in world football have to face when preparing to take on Brazil. They’ve won the World Cup more times than anyone for a reason.

That said, they were defending World Cup champions when the USA earned its lone victory in the series, a 1-0 win in the Concacaf Gold Cup Semifinals on Feb. 10, 1998 at Los Angeles Memorial Coliseum.

As far as career-defining moments go, if Kasey Keller could name one this would be it. The goalkeeper wrote a large part of his legacy with the MNT that night, making 10 saves – many of the incredible variety. One stellar stop on a header from Romario caused the legendary Brazil attacker to walk up and shake Keller’s hand after the play. After the match, Romario remarked, “that is the best performance by a goalkeeper I have ever seen.”

Goalkeeping was only part of the equation. In order to win, a goal needed to be scored and the came in the form of a rocket, long-range effort from Preki in the 62nd minute. The goal was the MNT’s first against O Canarinho in 68 years, and combined with Keller’s remarkable play stood up as the lone goal in the 1-0 win.

The result improved the MNT’s record at the time to 1-7-0. Yes, that means there have been 10 more defeats since, but the USA has come close to more on a few occasions.

The two teams met in the same stage of the tournament five years later, this time in Miami’s Orange Bowl. Much like their 1998 semifinal tussle, Brazil ended up with a large advantage in shots, but once again Keller was superb in net, turning away every effort in the first half before getting a little help from the post in the 23rd minute when Kaka’s strike from 22 yards hit the woodwork.

Taking their chances when they could, the U.S. capitalized in the 62nd minute off the head of Carlos Bocanegra. In a breakout year for the U.S. Men’s National Team defender, Bocanegra scored his third international goal off a 45-yard service from Claudio Reyna. Sneaking into the box unmarked, the ball fell perfectly to Bocanegra who headed it down and into the net from six yards out.

Sensing a fading U.S. team in humid conditions, Brazil quickened their attack. The South Americans kept possession deep in the attacking end, looking for holes in the U.S. backline. Just when it looked like the U.S. might hold on for the win, Kaka pounced. Substitute Ewerthon dribbled into the box, cutting against Cory Gibbs and firing on frame in the 89th minute. Keller dove but couldn’t hold onto the shot, and the rebound fell to a waiting Kaka who slotted it into the open goal to force extra time.

Full of momentum and with the humidity bearing down, the young Brazil side continued to press the attack. It only took 10 minutes to end the match, completing a come-from-behind win in overtime. Slicing through the defense once again, Kaka ripped a shot that Keller had come out to block. The blast ricocheted off his chest back to the striker, who chose to pass to his left to an open Diego. With only Gibbs on the line in front of him, Diego placed it on goal, but the U.S. defender stuck out his right arm to deny the effort in the 98th minute. Given a red card for preventing a certain goal, Gibbs was sent off to leave the U.S. with 10 men for the remainder of the match. Diego converted his penalty kick with a smashing shot right down the middle that fooled Keller, who dove left.

AND THEN A FIFA FINAL…

How about one more moment to underline the challenge of facing Brazil? It came at the 2009 FIFA Confederations Cup in South Africa, when a U.S. team featuring Landon Donovan, Clint Dempsey, Carlos Bocanegra and Tim Howard among others ended a 35-match unbeaten run of reigning European champions Spain, riding the 2-0 Semifinal upset to the championship match against Brazil.

The sides had faced off during the group stage just 10 days prior, with the South Americans laying a heavy 3-0 thumping on Bob Bradley’s side. Things would be different, or at least start differently in the Final, with the USA efficiently taking its early chances to run out to a 2-0 lead by the half-hour mark. 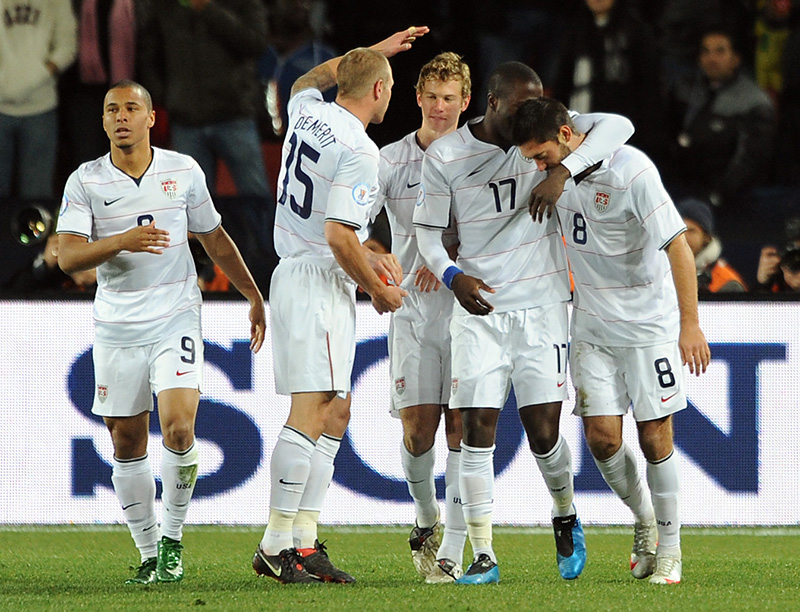 In the 10th minute, Jonathan Spector’s perfectly served ball from the right found Dempsey, whose glancing touch tucked past goalkeeper Júlio César. Seventeen minutes on, a well-worked counter attack concluded with Charlie Davies setting up Landon Donovan to push the U.S. into the break with a 2-0 lead.

Both goals were milestones in their own regard. Dempsey’s strike broke Brazil’s 315-minute shutout streak, while Donovan’s handed the USA its first and only two-goal lead in 19 all-time matches against the South Americans.

Milestones don’t win matches, unfortunately. Despite the score line, Brazil had largely dominated the first half and it took striker Luis Fabiano less than 60 seconds to get them on the board in the second. He followed that up by putting away the equalizer in the 74th minute, heading home from close range after a rebound off the cross bar. Full of momentum, the South Americans completed an incredible comeback as Lucio rose in the box to head home an 84th minute corner kick.

While the loss was difficult to swallow, the USA would walk away from the defeat with its heads held high, with the side’s runner-up finish standing as its best at a FIFA tournament.