Tiffeny Milbrett: "In My Heart and in My Blood"

Growing up in Portland, Oregon, an eight-year-old Tiffeny Milbrett sat in front of the family TV and marveled at the amazing athletes – track and field stars and volleyball greats – who competed in the Summer Olympic Games.

In fact, she was so mesmerized by those Olympian feats that Milbrett not only fantasized about performing at the highest level possible, she made it a goal to compete at what she called “the pinnacle" of sports. "Oh gosh, that's where I wanted to be, in that competition," she told ussoccer.com on the verge of being inducted into the National Soccer Hall of Fame as part of the Class of 2018. "I wanted to be an Olympian."

And it was after watching the local Portland Timbers of the old North American Soccer League (NASL) that Milbrett fell in love with the game of soccer. “I just feel fortunate I was able to play soccer at the upper echelon for so many years,” she added, looking back on a legendary career with the U.S. Women’s National Team. “It was really, really my goal, in my heart and in my blood.”

Among the Greats
She accomplished that and then some, becoming one of the greatest international soccer players of her own, or any other, generation. Milbrett became the first woman to score a goal in two Olympic gold medal matches and was a member of the legendary U.S. team that hoisted the 1999 Women's World Cup, among myriad other honors. 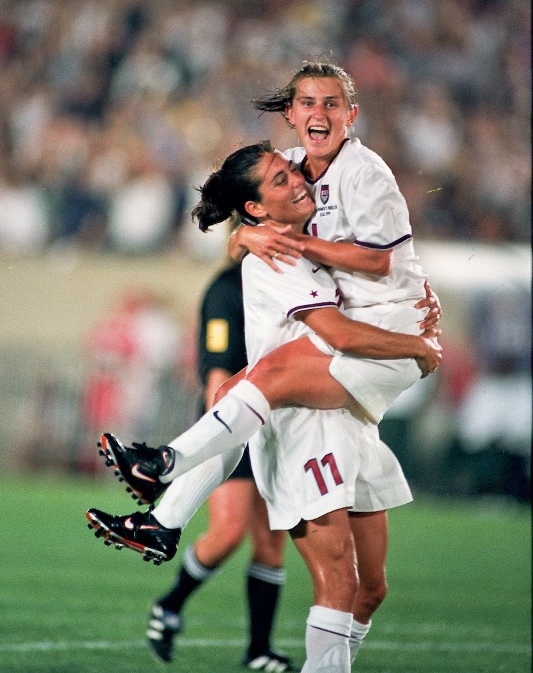 Tiffeny Milbrett celebrates scoring in a 7-1 win vs. Nigeria at the 1999 Women's World Cup with Julie Foudy.

For her outstanding accomplishments, Milbrett was elected to the National Soccer Hall of Fame. She will be enshrined in the new Hall, joining other U.S. soccer greats on Saturday Oct. 20 at the grand opening at Toyota Stadium in Frisco, Texas.

"I just feel most humbled to be considered alongside all that talent," Milbrett said. "I think it’s just the influence of the powerful people that helped shape the sport to where it is today. Just being able to live out my dream and being a part of being excited about the sport of soccer. We're still doing that to this day. And also, just being alongside all those influential people, whether it’s the ones being inducted for what they did on the playing field or off. I'm proud to be a part of these people that helped shape and mold the direction and advancement of soccer in this country. I take that very seriously. It's pretty cool to be a part of the group of people that have helped [grow the game]. It’s a reminder of the influence that you had with the sport and to continue to help it grow."

Milbrett was destined for greatness early on. She was a three-time Oregonian 3A player of the year, graduating Hillsboro High School holding Oregon state records for goals (54) in a season and career (131). During a sterling four-year career at the University of Portland, Milbrett struck 103 goals and collected 246 points while earning All-America honors an astonishing three times.

She began to make her impact on the National Team by connecting for a team-high three goals at the 1995 Women's World Cup, in which the Americans finished third. 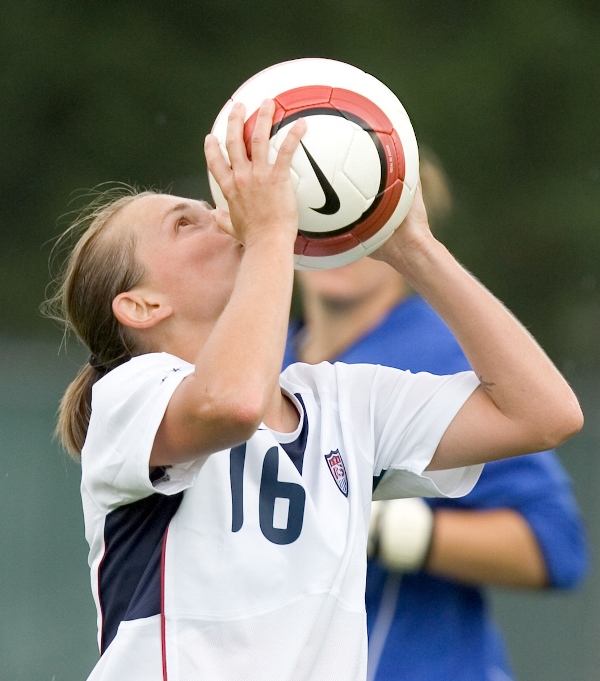 Milbrett celebrates scoring her 100th career WNT goal on July 11, 2005 at Merlo Field on the campus of University of Portland where she played collegiate soccer.

Milbrett the Match-Winner
In the very first Olympic women's soccer final a year later in Athens, Ga., she brought her game to yet another level by connecting with Mia Hamm for the game-winner to lift the U.S. to a 2-1 triumph over China in the Final. "Scoring goals is fickle," she said. "It's really interesting. There's something about performing in a pinnacle competition that speaks to what I always dreamed about in these pinnacle moments. It was extremely special to be able to have that reward after all the work you've done through the years and be rewarded with that kind of joy. Quite frankly, very few things you feel in your life are like that."

Four years later, Milbrett scored one of her most dramatic goals in the 2000 Olympics gold medal match against Norway in Sydney, Australia. Already with one goal under her belt in the match, the 5-foot 2-inch Milbrett managed to leap highest among some behemoth Norwegian defenders to head home a right-wing cross from Hamm two minutes into second-half stoppage time to knot proceedings at 2-2.

Milbrett admitted she did not remember too much of that 11th-hour scoring sequence.

"I don't even remember scoring to be honest,” she said. “I've seen it on video. It’s pretty amazing. I remember running to celebrate."

Regulation ended and stoppage time loomed. Teammate Michelle French was shaking out the Portland-born dynamo's legs. "She's just going: 'Do you know what you just did? Do you know what you just did?'" Milbrett said with a laugh. "And I'm like, 'Ok, let me just rest. I've got to get back.' I think that's what they refer to as just being in the zone. You're playing. You're focused on the task at hand."

The U.S. lost that confrontation in extra-time. But never one to rest on her laurels, Milbrett continued at the 1999 Women’s World Cup quarter-finals, weaving through the German defense to score a memorable goal in an epic 3-2 win, in what is still considered one of the greatest women's soccer matches of all-time.

A Century of Goals
She finished her 16-year international career with 100 goals in 206 appearances, nearly a goal every other game. And when she wasn't scoring for her country, Milbrett did it for her club – the New York Power. In the Women's United Soccer Association's (WUSA) inaugural 2001 season, Milbrett bagged a unique trifecta of honors. She recorded the first hat-trick in league history, won the scoring title (16 goals) and scooped MVP honors. 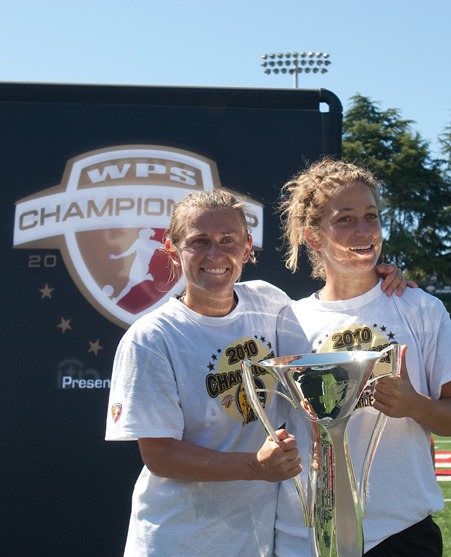 Tiffeny Milbrett ended her club career with one final championship as part of FC Gold Pride in 2010.

Milbrett, who celebrates her 46th birthday on Oct. 23, played three seasons for the Power, collecting 31 goals in 50 matches before completing her professional career in Women's Professional Soccer with FC Gold Pride, finding the net 10 times in 40 games.

These days, Milbrett is head girls coach with the Colorado Rapids. It’s not unreasonable to think, with her attitude, pedigree and work ethic molding young players, perhaps one of those youngsters will find her way to the pinnacle of the beautiful game the same way Tiffeny Milbrett did.