Five Things to Know About the England MNT

The U.S. Men’s National Team begins the final segment of the Kickoff Series when it faces England at historic Wembley Stadium in London on Thursday, Nov. 15 at 3 p.m. ET (ESPN2, UniMas). Before the USA takes on the world’s No. 5 ranked team, here are five things to know about the Three Lions.

England is recognized by many as the birthplace of the sport. Whether or not you believe that, the national team is the joint-oldest in the world along with Scotland, with the nations playing the world’s first international match – a 0-0 draw in Partick, Scotland on Nov. 30, 1872.

Though they did not participate in the first three FIFA World Cups, England has been a near constant in the tournament since, missing just three times since 1950. Their greatest achievement at the international level came when they hosted and won the 1966 FIFA World Cup, needing extra time to defeat West Germany 4-2 at old Wembley Stadium in London.

While long considered among the world’s elite, the national team’s performance at big competitions has at times disappointed the football-mad nation. With lowered expectations around the squad at last summer’s FIFA World Cup in Russia, England played an inspiring brand of soccer, reinvigorating the nation’s belief in the team with a run to the semifinals and ultimately a fourth-place finish.

Much of England’s success in Russia was credited to manager Gareth Southgate trusting and believing in the nation’s younger generation of players. As players like Frank Lampard and Steven Gerrard were ushered out of the mix, the next wave led by the likes of captain Harry Kane, Dele Ali, Raheem Sterling, John Stones, Marcus Rashford and Jordan Pickford have become the faces of a national team that is inspiring new faith throughout the country.

Joining the current senior team on the rise are the youth national teams, whose future seems very bright as the country’s U-20 and U-17 sides won their respective FIFA World Cups in 2017.

On Nov. 8, Gareth Southgate called up a strong 28-player roster for the matches against the USA and Croatia.

Sixteen players on the roster were part of England’s run to the semifinals of the 2018 FIFA World Cup. Additionally, the match against the USA will also serve as a “send-off” for current D.C. United striker and legendary England striker Wayne Rooney.

The MNT has faced England 10 times, and though the USA trails by a 2-7-1 mark in the all-time series the positive results have come in big matches.

The teams first met at the 1950 FIFA World Cup in Brazil, with a Joe Gatejens goal giving the USA a 1-0 win and one of the biggest upsets in tournament history. As the favorites going in, England was so highly regarded that when news of the result reached the UK, newspapers thought it was a mistake and instead printed that England had defeated the USA 10-0.

The USA earned its second win of the series 43 years later during U.S. Cup ’93 when Thomas Dooley and Alexi Lalas tallied to deliver a 2-0 victory against the Three Lions in Foxborough, Mass.

The most recent meeting came at the 2010 FIFA World Cup in South Africa. Steven Gerrard scored early, but Clint Dempsey answered with a little help from England goalkeeper Robert Green as the teams played to a 1-1 draw in Rustenberg.

There are lots of connections with this matchup, but the most meaningful is that U.S. defender Cameron Carter-Vickers will have the chance to play against the country of his birth. The American and English sides of the Carter-Vicker’s family were documented in his episode of RISING: Emerging Faces of the U.S. Men’s National Team. Fellow MNT defender Antonee Robinson had hoped to run out for the USA at Wembley, but suffered an ankle injury during training on Tuesday, ruling him out of this month's matches. 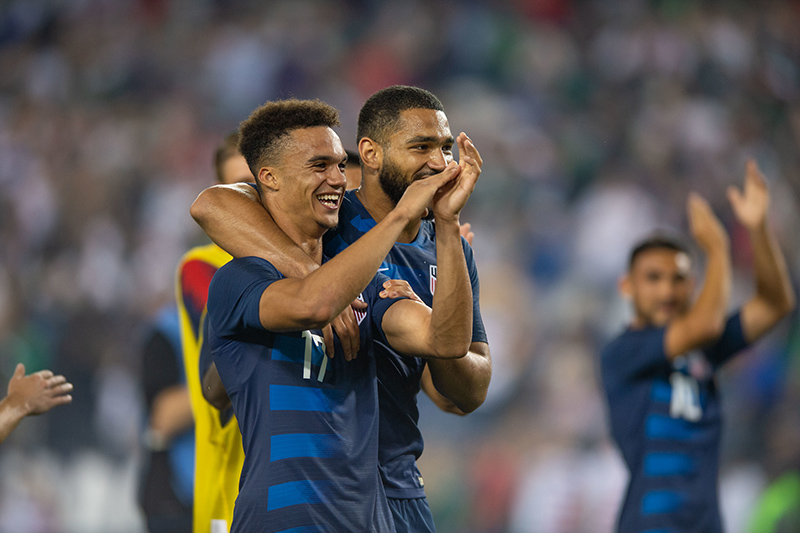 Carter-Vickers (Swansea City) joins DeAndre Yedlin (Newcastle United) and Luca de la Torre (Fulham) as the four players on the roster that play for clubs in the English league system. Matt Miazga is under contract with Chelsea, currently on loan to Nantes in Ligue 1 in France. Atlanta United goalkeeper Brad Guzan had a 10-year spell in England with stints at Aston Villa, Hull City and Middlesbrough. LA Galaxy midfielder Sebastian Lletget began his professional career in England, coming up through the West Ham United Academy.

Midfielder Christian Pulisic is currently club teammates with England youngster Jadon Sancho at Borussia Dortmund. That isn’t Pulisic’s only connection, however. The MNT attacker actually spent one year living in England when his mother received a Fulbright scholarship to do a teaching exchange near Oxford. Pulisic’s father Mark has said the year Christian spent playing with local club Brackley Town helped peak his interest in the sport.