Making the Case: Alex Morgan, 2018 Female Player of the Year

On Nov. 20, U.S. Soccer announced the five nominees for 2018 U.S. Soccer Female Player of the Year. This year's nominees are midfielders Julie Ertz and Lindsey Horan; and forwards Tobin Heath, Alex Morgan and Megan Rapinoe. In the fourth edition of our “Making the Case” series to highlight each of the candidates, we feature Alex Morgan.

After closing out 2017 on a goal scoring roll, Alex Morgan continued her stellar form in 2018 to finish the year with 18 goals in 19 games – while picking up three assists – for a total of 25 goals in her last 26 games dating back to Aug, 3, 2017. Her 18 goals this year were by far a team-leading mark and were also the second most she has scored in a calendar year in her WNT career. She finished the year with 98 career goals.

Morgan averaged almost a goal a game in 2018 while scoring against nine different countries. She tallied in the first game of the year against Denmark, and also scored against Mexico, China PR, Japan, Brazil, T&T, Jamaica, Canada and Scotland.

She won the Golden Boot as the top scorer in the Concacaf World Cup qualifying tournament, pounding in seven goals over the five matches. Her two goals in the semifinal win against Jamaica helped send the USA to the 2019 FIFA Women’s World Cup in France and she bagged a clinching goal in the championship game against Canada. 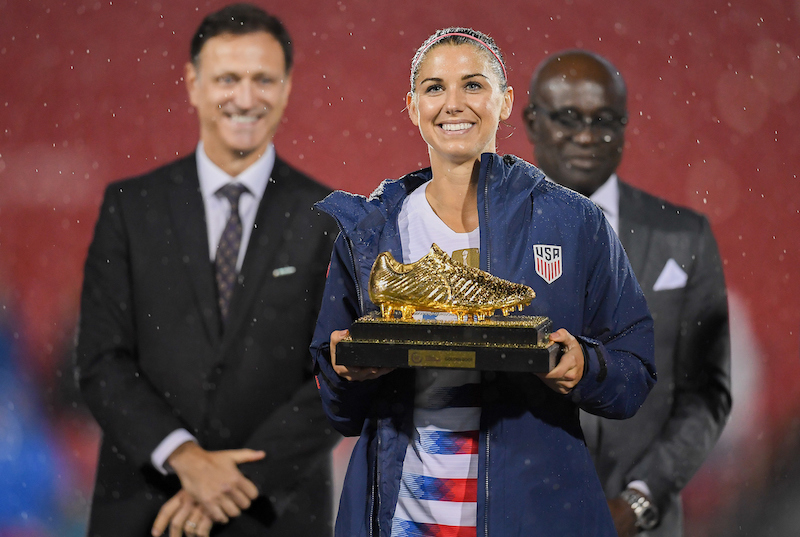 For the Orlando Pride in the NWSL, she played in 1,500 minutes over 19 games and had five goals and two assists.