The 25th different player to win the award, Steffen becomes just the second player in the award’s 35-year history to earn the honor in his debut year with the U.S. Men’s National Team, following Peter Vermes in 1988. Additionally, Steffen is the fourth goalkeeper to attain the honor after Kasey Keller (1997, 1999, 2005), Tim Howard (2008, 2014) and Brad Friedel (2002). At 23 years old, he is also the youngest goalkeeper to win U.S. Soccer’s Male Player of the Year.

“It’s an honor to be put with those names that have won before me and to have the respect and confidence from teammates, coaches and staff,” Steffen said. “I’m thankful for my support system. Without them I couldn’t have done any of this. It gives me motivation and confidence to keep going and do bigger and better things.”

The voting margins for the Male Athlete of the Year award were close, with Steffen receiving 44 percent of the tabulated votes, closely followed by Tyler Adams (38 percent). Weston McKennie rounded out the top three with 16 percent.

For Young Male Athlete of the Year, Mendez garnered 43 percent of the vote, followed by Mark McKenzie and Giovanni Reyna who each had 18 percent.

One of 20 MNT players to debut during the MNT’s transitional 2018 campaign, Steffen stood out among his fellow first-timers. The 23-year-old led all goalkeepers with six appearances, which tied him with Kasey Keller (1990) and Troy Perkins (2009) for most caps by an MNT backstop during his debut year. Steffen kept clean sheets in the MNT’s matching 1-0 victories against Paraguay on March 27 in Cary, N.C. and Mexico on Sept. 11 in Nashville, Tenn. His shining moment came against France on June 9 in Lyon, where the rising goalkeeper made eight saves to help the USA to a 1-1 draw in Les Bleus’ last match before their victorious title run at the 2018 FIFA World Cup in Russia.

Steffen continued to impress during his second full season with Columbus Crew SC, keeping 10 clean sheets in 29 matches while racking up a 12-10-7 record to earn MLS Goalkeeper of the Year honors and helping the club back to the MLS Cup Playoffs. Like he did in 2017, Steffen came up huge again in the postseason, saving two penalty kicks to push Columbus past D.C. United in their shootout victory during the Knockout Round on Nov. 1. Steffen will play the first half of the 2019 MLS season with Columbus Crew SC before completing a transfer to English Premier League giants Manchester City in July. 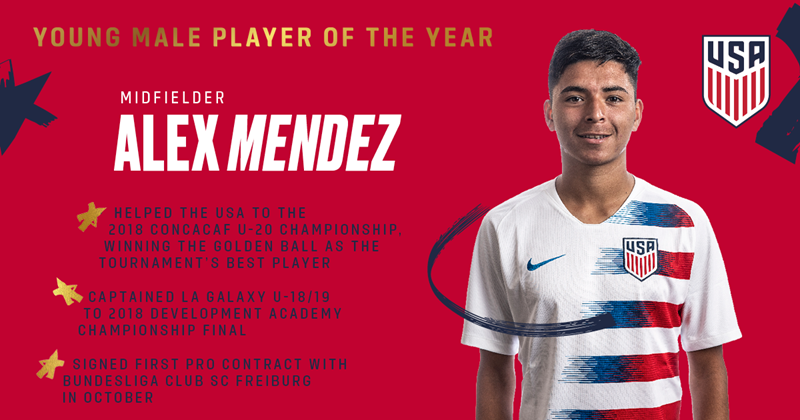 Mendez led the U.S. U-20 MNT to the Concacaf U-20 Championship title last month, taking home the Golden Ball as the tournament’s top player at just 18-years-old, as well as finishing second in the tournament’s Golden Boot race with eight goals to go along with six assists. While the U-20s had no trouble finding the back of the net in Florida, his scoring came at the team’s most crucial junctures. He scored both goals in the 2-0 Final victory against Mexico and netted the opening goal in the 4-0 win against Costa Rica to clinch a place at the 2019 FIFA U-20 World Cup. On the year, Mendez appeared in 13 of 14 international matches and will serve as a key figure for the team as it prepares for next summer’s 2019 U-20 World Cup in Poland.

At the club level, Mendez captained LA Galaxy to the U-18/19 U.S. Soccer Development Academy Championship Final and was named to the Western Conference Best XI. He scored five goals during the team’s six-game playoff run, including a free kick from outside the penalty area in a deadlocked semifinal against Vancouver Whitecaps FC to send the Galaxy to the final. Mendez also made his professional debut in 2018, appearing in six games for LA Galaxy II of the USL Championship, during which he netted his first professional goal on another free kick on July 1. In October, the midfielder signed with German club SC Freiburg, where he will be eligible to begin play in January 2019. Following Christian Pulisic (2016) and Josh Sargent (2017), the 18-year-old is the third straight Young Male Player of the Year winner to sign for a club in Germany as a teenager.

“It’s a very proud moment,” Mendez said. “First, I want to thank U.S. Soccer for the nomination. I also want to thank my family, my teammates and the U-20 squad that won the Concacaf Championship. Obviously, this is an individual award, but none of this would be possible without them pushing me to be a better player.”

A player can only win the Young Player of the Year award once in his career.