Former U.S. international and accomplished collegiate coach Jimmy Banks passed away in Milwaukee on April 26, 2019 after a battle with pancreatic cancer.
U.S. SoccerApril 26 2019

Banks dedicated his life to the game in a career which spanned more than 30 years, as a player, coach and mentor in the youth soccer community.

“The entire U.S. Soccer family is deeply saddened by the passing of Jimmy Banks,” U.S. Soccer Federation President Carlos Cordeiro said. “At a time when few African American players were reaching the elite level of the sport, Jimmy’s rise to play for the U.S. Men’s National Team at the 1990 World Cup inspired a new generation to reach the same level. His time as a player, coach and mentor will leave a lasting impact on the sport in this country, particularly his tireless efforts to grow the game through his inner city soccer programs. Our thoughts are with his family, friends, and teammates as we reflect on his pioneering legacy.”

Born in Milwaukee, Banks began playing soccer at age six through a Salvation Army program near the city’s Westlawn Housing Projects. He went on to play for Custer High School as well as the famed Milwaukee Bavarians, where he first became acquainted with future U.S. Men’s National Team head coach Bob Gansler. Beginning his collegiate career at UW-Parkside in 1983, Banks transferred to join Gansler at UW-Milwaukee. 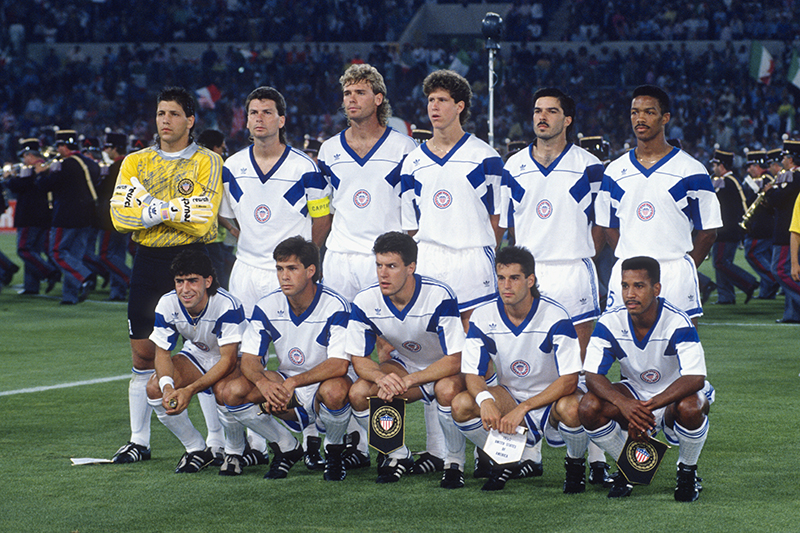 During the final year of his collegiate career, Banks earned his first of 36 caps for the U.S. Men’s National Team in a 0-0 draw with Canada on Feb. 5, 1986 in Miami. Reunited with his former collegiate coach when Gansler was named manager of the U.S. Men’s National Team in 1989, Banks played a pivotal role in the USA’s 1990 FIFA World Cup qualifying campaign, playing in four matches to help the MNT reach its first World Cup in 40 years.

Banks and teammate Desmond Armstrong became the first two African-American players named to a U.S. World Cup squad when they made the 22-man roster for Italia ’90. Able to play as a defender as well as a left winger, Banks made two appearances, playing in the narrow 1-0 defeat to the host Italians and a 2-1 loss to Austria to close the USA’s participation in the tournament.

Without a fully-fledged professional outdoor league at the time, Banks played the entirety of his pro career indoors. Selected No. 1 by the Major Indoor Soccer League’s Kansas City Comets and the American Indoor Soccer Association’s Milwaukee Wave in the leagues’ respective 1987 drafts, Banks chose to sign with his hometown team, where he played from 1987-1993. A league all-star in 1992, Banks was later inducted into the Milwaukee Wave Hall of Fame in 2013.

After retiring from the game, Banks became head coach of the men’s team at the Milwaukee School of Engineering in 1999. During his 20 years leading the program, Banks amassed 198 wins to go along with two NCAA Division III Tournament appearances and two NACC conference championships.

In addition to his work in the college game, Banks continued to give back to the soccer scene in Milwaukee by developing urban youth soccer programs in the area.

He is survived by his three sons Demetrius, J.C. and Jordan.