Richmond’s Bulow & the Power of a Chance

Coach David Bulow watched, arms crossed, as his young striker was helped from the field. He was concerned for Charles Boateng, who caught a stray elbow scoring his fourth goal of the day in the First Round of the 2019 Lamar Hunt U.S. Open Cup. There was a big embrace too. Bulow, now head coach in Richmond, was the last man to score four goals in an Open Cup game in Kickers’ red. Watching Boateng’s big day end, Bulow was looking into a kind of magic mirror.

“We always take the Cup seriously here,” Bulow, top-scorer in the 2011 edition of the tournament, told ussoccer.com. “When I was playing, we always got up for the Cup. Every year it was our goal to be the last USL team standing and to play an MLS team. That’s what makes the Cup great – you can be in the right place at the right time to do something special.” 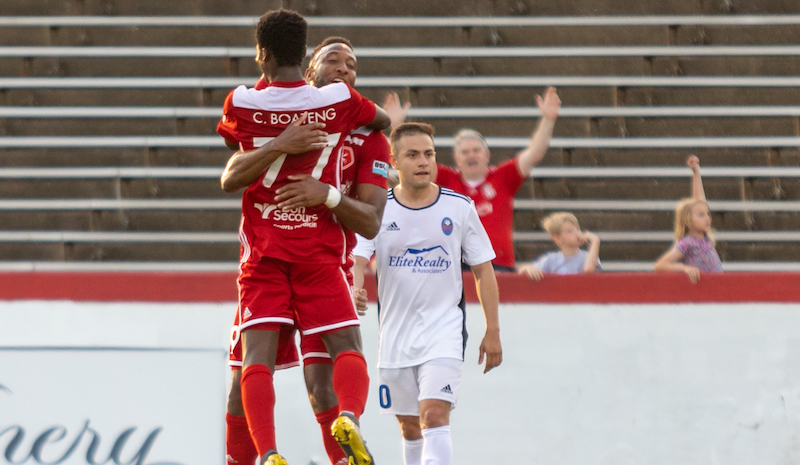 Being in the right place at the right time is a theme in Bulow’s life, like any good striker. He played Division III college ball in the woodsy environs of Maine with the Bowdoin Polar Bears. His opponents were the Connecticut College Camels and Tufts’ Jumbos. There’s talent there, in NESCAC, on those small New England school campuses, but it’s not an ideal place to launch your career in professional soccer.

Getting Serious
Two years in at Bowdoin, the school got serious and hired a dedicated coach. Prior to Brian Ainscough’s arrival from Providence, Bowdoin’s soccer coach was also its basketball coach. Bulow blossomed under the new man’s tutelage and coaching style. “These were the most successful years in the school’s history,” said Bulow, a third-team All-American who sits second on Bowdoin’s all-time top-scorer list. “I began to find my form as a player then.”

Born and raised in Colorado, Bulow began playing summers in the old Premier Development League (now USL League Two) with the Cape Cod Crusaders, putting his toe into the Open Cup for the first time and winning three straight national titles with the Crusaders. He scored an astonishing 21 goals in 18 games. “It was at this point, I started to think ‘maybe I have a chance to play beyond college’” 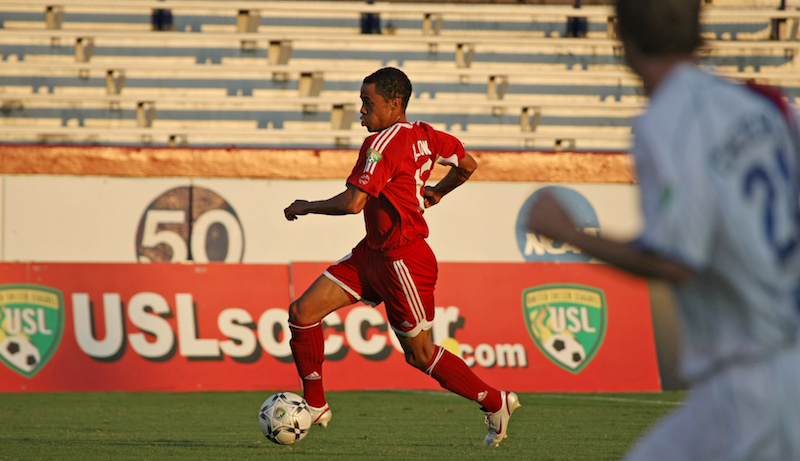 (Bulow in action in his playing days in Richmond)

An agent approached Bulow after his Man-of-the-Match day in the 2004 national championship game and a professional career was born – out of nothing. Just like that. Bulow wasn’t going to have to turn his African Studies major into a real-life job because there was more soccer to play, more goals to score for this rangy, clever striker.

Bulow trained with the Colorado Rapids, back living at home and trying to make it as a pro soccer player. But even with an agent, the game isn’t sentimental “I was one of the last guys cut that year,” Bulow said, the dust of regret still in his voice, wishing he was trying out now with all the MLS expansion teams and opportunities. “With all new teams – I might have made it.”

Bouncing Around
Set on his course of pursuing soccer, Bulow floated and bounced like a cork in a raging river. He washed up in Ireland. “It was a level below what you find in USL’s top division.” Bulow said of those days on the Emerald Isle where he played in the old UEFA Cup (now Europa League). He tended bar at night and lined up with Dublin City, Limavady United and Dungannon Swifts in the daylight hours. “The Irish love the game and were so smart about it,” Bulow said. “You’d play a 45-yard ball across the field just break the pressure and 2500 people applaud. Sometimes at a Kickers game the biggest cheer comes when the ball gets kicked highest in the air!”

An offer came from MLS side FC Dallas when he was still living and playing in Derry, in Northern Ireland. Bulow turned it down. “Maybe it was a mistake, but I wasn’t ready to move to Texas, live in a hotel and make like a thousand dollars a month.” 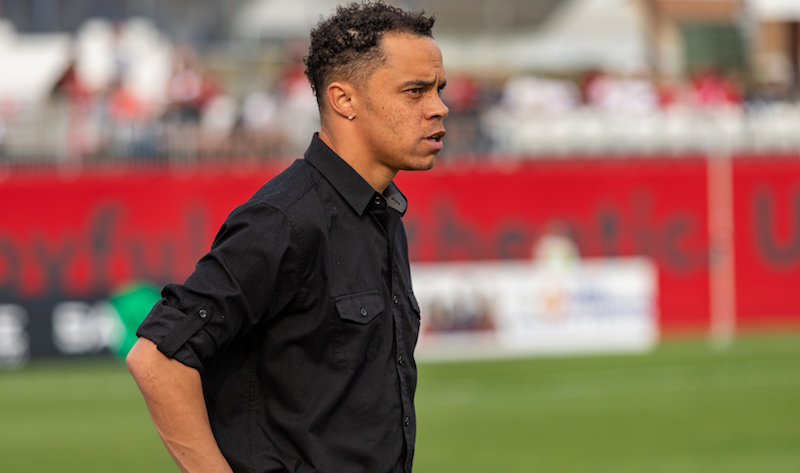 (Bulow brings a sharp mind to the Richmond Kickers bench)

But the river of soccer rushed Bulow back home. Back to the Cape Cod Crusaders. It was the Open Cup that delivered the free-scoring forward to Richmond, his home ever since. “We had an early round Open Cup game against the Kickers. We lost, but I played well,” he said, always humble, ever grateful. “They offered me a contract and I signed in 2006.”

Bulow appreciated the stability of the Kickers, settled into life in Virginia. “The club’s grounded in the community,” said Bulow about the club he now coaches, after they dropped from the top USL division to USL’s League One (the third pro tier) – to rebuild and focus on development. “At other clubs, you’d sometimes get chased off fields and checks would be two or three weeks late. The Kickers were a high standard. Well run, well supported and we won a title in my first year.”

What Bulow remembers best of his five seasons playing in Richmond is the Open Cup – those special nights. “When you’re a second or third-tier team in a Cup, you pretty much know you’re not going to win it,” said Bulow, hoping to push his youngsters as far as possible after their 6-2 start against local amateurs Virginia United. “But those runs where you go so close and take some top tier teams down are at the heart of the Cup. They matter.

“In 2011,” Bulow went on, remembering that magical year when he led the Kickers to the Cup Semifinal and finished with six goals as the competition’s top-scorer, “we weren’t the fourth best team in the country. “But we finished fourth and people remember it.”

Hot in the 2011 Cup
Bulow grabbed a pair of goals in each of the Kickers’ first two games, both 4-1 wins over the Dayton Dutch Lions and the Pittsburgh Riverhounds. “As a center forward sometimes you get on a hot patch,” said Bulow, who was starting to fall out of favor in the first team and was getting his chances more in the Cup. “As a veteran, I wanted to make sure I took advantage of all the opportunities that came my way.”

You feel like you’re consulting an oracle when Bulow talks about the Open Cup. His memories are sharp and his thinking is keen on the subject. “It’s not like the FA Cup where little teams want to get the big teams to come play at their place,” said Bulow, who remembers “the thrill”, still, of playing a high school game at an empty Mile High Stadium. “For us, for me, it’s awesome to draw an MLS team and then go out to get to play at their place. You’re not expected to win and you’re just loose and trying to enjoy the moment.” 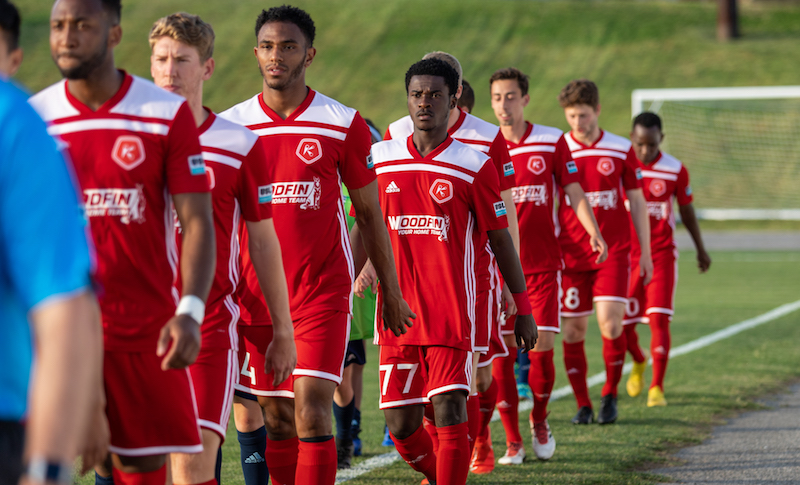 The Kickers played in the Third Round at Columbus Crew Stadium. “It was hard for them [Crew] to get up for it,” Bulow remembered of that game the Kickers won 2-1 after a Nozomi Hiroyama screamer and Matt Dellacate’s late winner. “For us, it was easy because nothing was expected. It was hard for me to get up for pre-season games against UVA, but when you’re in USL and you’re playing an MLS team, you get up easy.”

Up next was a visit to Sporting Kansas City. The Kickers, having beaten the Crew, began to believe. “You feel like you’ve done it before so why not do it again? Your confidence goes up,” said Bulow, who was up against SKC’s Roger Espinoza, who he coached in high school. “KC always give it a go in the Open Cup and they were strong, with a Semifinal place on the line. We handed them the first loss they had at their stadium – a run of something like 18 games.”

There was a massive thunderstorm during the game – an hour-and-ten minute delay. “It broke the game into two games and that helped us,” Bulow said. He came on as a sub, eager to take his chance. “I drew the penalty and I scored it.”

Forgot the Ball
It was the record-setting goal. “I was stupid,” Bulow said with a laugh. “I forgot to get the ball after the game. I was kicking myself. I ended up writing to Sporting Kansas City asking for it. They must have been like ‘forget this guy’ and I never heard back.” 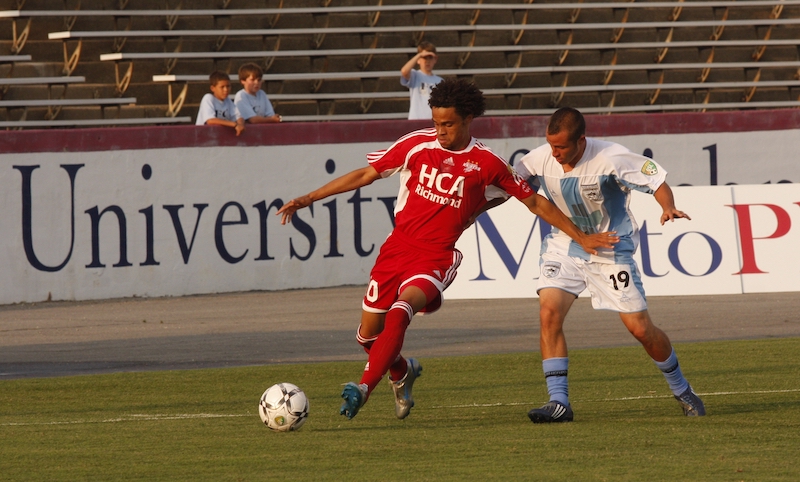 (First as a player and now as coach, Bulow found a home with the Kickers)

What Bulow did get was a yellow card, late in the game, while holding the ball up to waste time in the corner. “My finger got caught in the string of the KC player’s shorts and the ref thought I was pulling him,” Bulow said of the card that saw him suspended for the big Semifinal against the Fire, in Chicago. “I had some time with the Fire – my parents are from there. I would have had a lot of people there at the game.”

Instead, Bulow followed the game, which the Kickers lost 2-0, on the Internet. “That was my last chance to play in the Open Cup – it was my last Open Cup."

Bulow was a valued player. He scored 25 goals in 51 appearances. A wily head, he had a good sense of the game and its opportunities. He was made for coaching. When his knees began to go, he swapped the penalty area for the technical area. “I got a little success as a player. I was good at my level,” concluded the humble Bulow, who took over coaching the club’s youth teams in that historic 2011, before taking over the first team this year. “I just wanted to pay some of what I’ve had forward and give the opportunities and give guidance. I have a lot of love for the game and I want to share it.”