Michael LewisMay 26 2019
Open Cup
Patrick Schulte was two hours late for the start of classes at Francis Howell High School in St. Charles, Missouri on May 16, but he had a pretty decent excuse.
Only hours prior, the 18-year-old goalkeeper for Saint Louis FC was just about standing on his head – literally and figuratively – to ensure the USL Championship side's passage to the Third Round of the 2019 Lamar Hunt U.S. Open Cup in his professional debut in Des Moines, Iowa.
All Schulte did was stop not one, not two, but three penalty kicks in the shootout to help lift the visitors to a 3-1 tie-breaker win over the Des Moines Menace after the teams played out a 1-1 draw through 120 minutes of win-or-go-home soccer.
"He was excellent," Saint Louis FC head coach Anthony Pulis said. "His mentality was great. He went into it really composed. I thought he put on a mature [performance]."
"It was unbelievable," Schulte told ussoccer.com. "I can't describe the feeling of being able to play in it. I thank my coaches for giving me the opportunity and having the trust in me."

Now, many teams have used young players in Open Cup matches, but few, if any players have accomplished what Schulte did. After all, just how many players not only save their team in a shootout but make three big saves in the process?
"Nobody springs to mind for me," Pulis said. "I don't know if anybody especially in their professional debut, has saved three out of four penalty kicks. He's got to be one of only a few, I've got to imagine, if ever. It wouldn't surprise me if it was a record."
Prior to the opening kickoff, Schulte admitted it took a while for him to shake the nervous energy out of his 6-3, 174-pound frame and system. "Going into the game I was super nervous and all that, but I credit my teammates for calming me down and telling me: 'Oh we have trust in you and go be you.' After all that, it just started to be another game," he said. "For that type of game to be my pro debut was something that was super special."
And Coach Pulis? He never wavered in the confidence he had in his teen goalkeeper. Schulte's window of opportunity opened wide because another first-team goalkeeper, Tomas Gomez, was still recuperating from an injury. Pulis decided to give his Saint Louis FC Academy star a chance to show his stuff.
"I said to him before the game, we wouldn't have played him if we didn't think he was good enough," he said. "So, I think he can take a lot of confidence from that. We played a young player, Aedan Stanley, last year in the majority of our first team games in the first half of the season before he left for Duke because he was doing well and because he deserved the opportunity. I've said it before, and I'll say it again: If we've got young players that deserve the opportunity to play and they're earning that right by the work they're doing every day in training with us, then I have no hesitation in playing him." 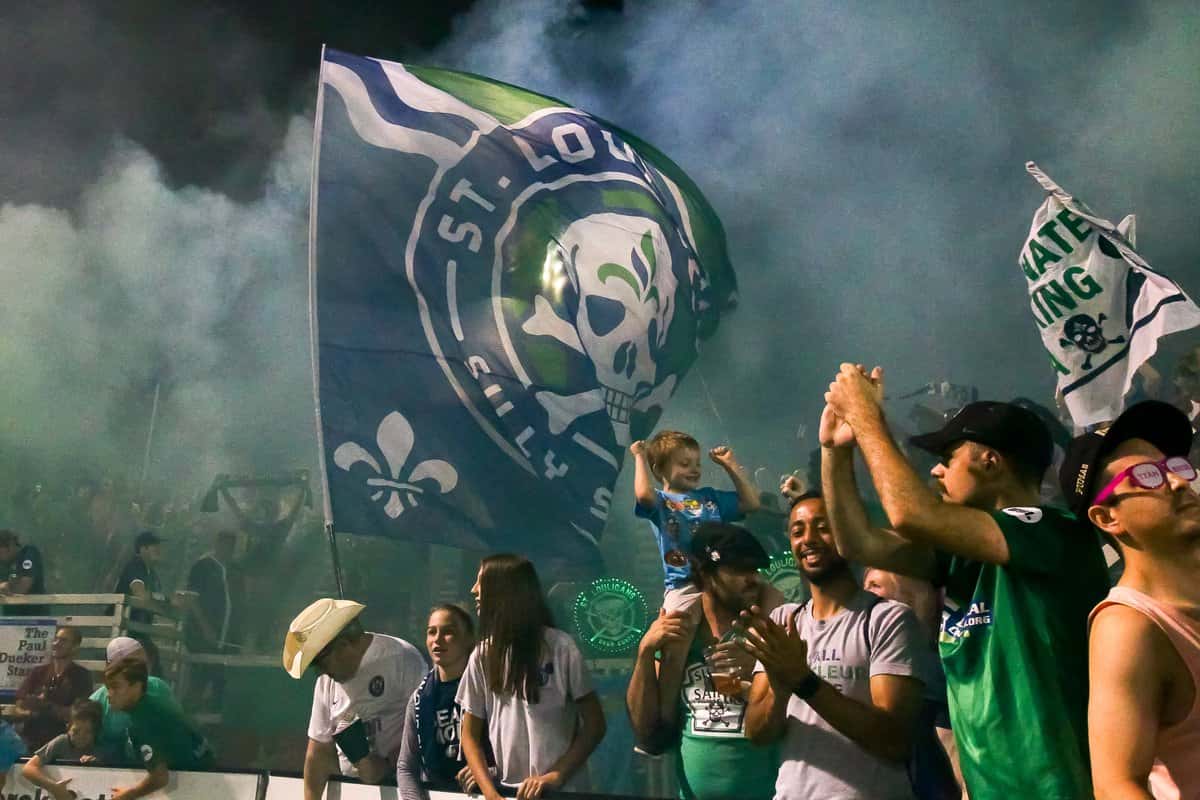 (Next up for St. Louis is a home game against Forward Madison)
Especially after what transpired in Iowa. Schulte looked more like a grizzled veteran than someone preparing to graduate from high school on Saturday, June 1.

During the shootout, a partisan Menace crowd cheered on their heroes behind the goal.
But that didn’t intimidate Schulte, who dove to his left to deny Joshua Coan on Des Moines' first attempt. After Andreas Volk converted his chance to the right side, Schulte rose to the occasion again, producing a two-handed save while moving to his left on Nick Perea and then sealing the victory by sprawling to his right to stop Gaoussou Bayakoyo
Russell Cericone converted the game-winning penalty for Saint Louis.
"Before the shootout, all the players were like, 'We've just got to make three because Patrick's going to save one.' That really helped me," Schulte said. "I'm going to save one and they're going to finish all theirs. Once I saved the first one, I felt really confident. After that, I saved my second – [Perea] took a penalty kick during a run of play and I had an idea of where he was going to go – and then the third. I just picked a way and that's the way I'm going to go. Got to make sure I cover the ground and make myself big on the way I'm going to go. It turns out they went the way I guessed."
What he accomplished took a while to sink in. "I didn't think of it until I sat down in the locker room and I was like, 'Wow! that was real cool,' " he said.
Schulte's secret on stopping penalties? Well, he doesn't have one, or at least not yet.
"No, honestly," he said. "Penalty kicks, you can't really master them. You just got to get lucky with it. Anyone can change up where they want to go. But I just think you get lucky in penalties. That was my luck."
Whether it was luck or skill, Schulte still was hailed a hero, getting big hugs from his mother Kathy and grandmother Coco afterwards. They made the 350-mile drive from St. Louis to Des Moines with his father Tim to root on their favorite goalkeeper. "They all drove up Wednesday morning when I told them I was starting," Schulte said. "Just having them there in the stands was really special."
As for being a bit tardy for homeroom and the first few classes, well, Schulte woke up at 4:40 a.m. to catch a sunrise flight to St. Louis. He went home, showered, put on some new clothes and bolted to school.

Schulte didn't get admonished, only congratulated from friends and teachers alike. Given what transpired some 12 hours prior, School officials had no problem with the senior keeper being a bit tardy.
"My school has real good support through all the sports," Schulte said. "They were all supportive of me, congratulating me. That was really special walking into school. They all knew about it from Twitter."

18 year old keeper Patrick Schulte is a 🧱 wall and saved 3 penalties in the shootout to help 10 man @SaintLouisFC escape with a win at 9 man @MenaceSoccer94 in the 2nd round of #USOC2019
STL will host @ForwardMSNFC May 29 at 7PM Central pic.twitter.com/BoPthDD1UJ

Schulte, who will attend St. Louis University this fall, said it was one surreal experience. "I didn't think they [teachers] knew about it, but they did," he said. "I was getting a lot of compliments, which was really cool."
He got through the day via adrenaline because of the lack of sleep. "I was surprised that I did not fall asleep," he said. "I think I got two hours of sleep, two and a half hours of sleep."
Schulte started playing soccer at the age of three. His father was against Patrick becoming a goalkeeper but gave him permission when the he turned 12. He’s also played basketball and baseball, but soccer is his first love. "I just grew a strong passion," he said. “I love competing. It's hard to describe. I just felt in my heart, this is it. I played two other sports, but it really never hit home in my heart like soccer did. As I was growing older, I started to stand out [in soccer]."
Saint Louis FC's next Open Cup challenge will come at World Wide Technology Soccer Park on Wednesday, May 29 at 8 p.m. ET, when the team takes on Forward Madison (USL League One) – a game broadcast live on ESPN+.
The teams tussled in the preseason with Saint Louis FC prevailing in a slim 1-0 decision in March.
"We know a decent amount about them. We played them in the preseason," Pulis said. "Thought they were a really good side. They caused us some problems in that game and gave us some really good tests. Nobody here will be taking them lightly. Our mentality is to treat every game the same, respect the opponent. We'll be making the players fully aware of what they're about, what their tendencies are, their strengths and weaknesses, and make sure our guys' mentalities are good. It won't be an easy game."
"Hopefully, we can come away with the win," Schulte added.

No Guarantees for Schulte

Despite his heroics, Schulte doesn’t know if he might start that match because both first-team goalkeepers -- Jake Fenlason is the other -- could be healthy. "I haven't heard anything," he said. "I'm just going to do what I can do and go from there."
When Pulis was interviewed for this story, it was a week prior to the Open Cup match. But the coach said it was a possibility that Schulte could dress or even start again. "That was one of the main reasons why Patrick got the opportunity," Pulis said. "Gomez now is working his way back to fitness. We may have a first-team goalkeeper available for that game." 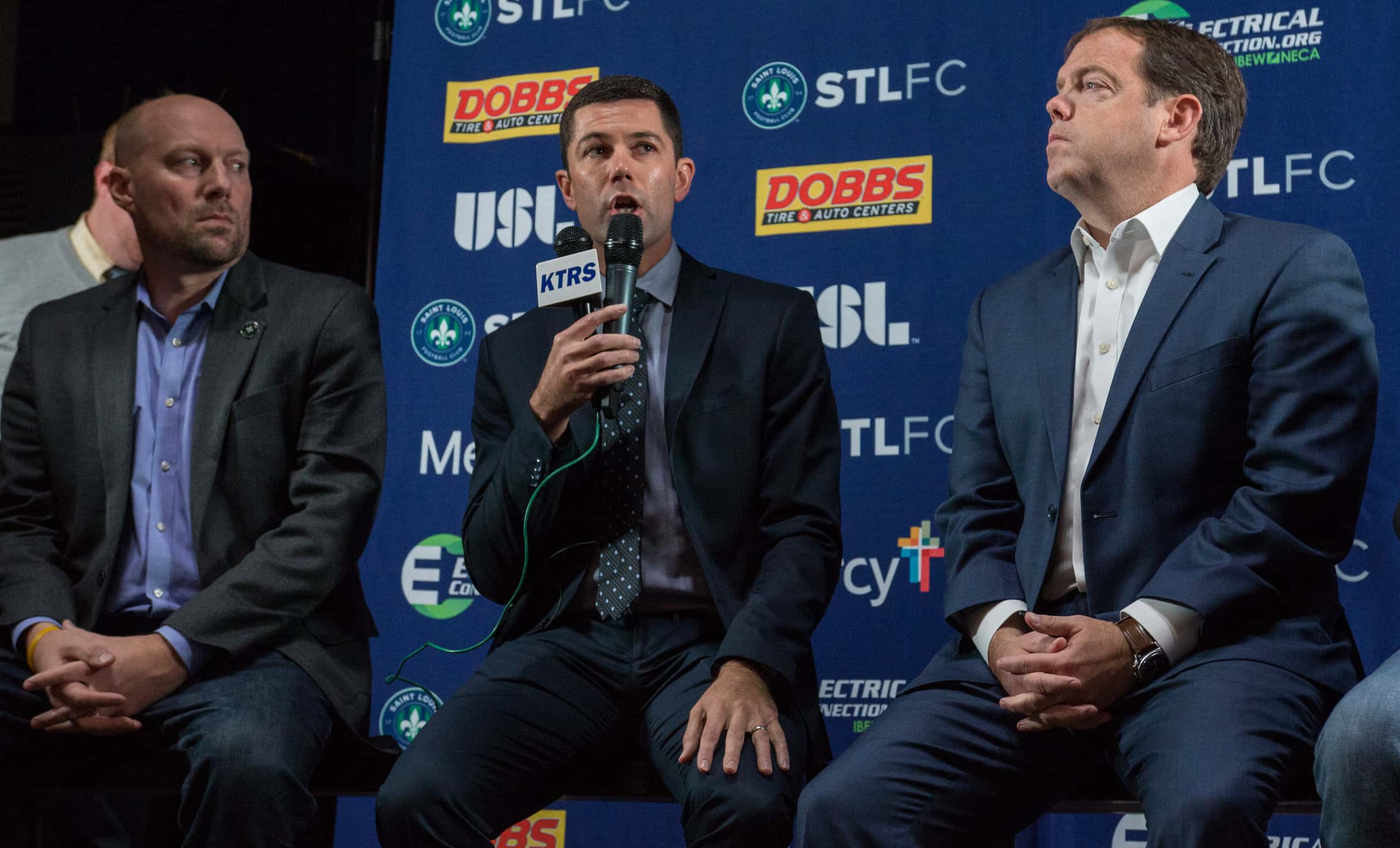 Regardless what transpires this Wednesday, his heroics in Des Moines, Iowa probably won't be the last we see of Schulte, who was called into the U.S. National Team Under-18 training camp in January.

Pulis has liked what he’s seen and feels that the teen ‘keeper will be around for a while.

"When you look at him, his size is the first thing that strikes you," Pulis said. "He has a really good frame. He's a tall boy. It's important for goalkeepers. He's really good with his feet. He's got a lovely left foot. I think the left foot always looks a little bit easier on the eyes sometimes. Playing out of the back comes naturally to him. He commands his box well. He's a good shot stopper. If you listed attributes from what you want from a goalkeeper, he's got a lot of those. He needs a little bit of filling out to do, I suppose. He's big, a little bit wiry. Once he fills out and gets a little bit stronger it obviously will help him as well. It's the experience of playing in these types of games that will help him grow into a better goalkeeper.

"He still has a lot of growing to do, but I think he has a really high ceiling,” Pulis concluded. “He's a good kid. He's got his head screwed on, got a lot of really good attributes that could hopefully allow him to have a really good career."

Patrick Schulte has certainly taken the first steps, getting off to one fabulous, memorable and historic start.