2019 US Open Cup Tournament Bracket Round of 16 schedule set

Draw Hands Saint Louis FC Home Tie vs. FC Cincinnati, Sends New Mexico United Away to FC Dallas;
Round of 16 to be Played June 18-20, All Matches on ESPN+

CHICAGO (June 13, 2019) – The official Round of 16/Quarterfinal Draw for the 2019 Lamar Hunt U.S. Open Cup, U.S. Soccer’s National Championship, was conducted this morning, setting regional groups in a bracket that will determine matchups through to the tournament Final. Fans can watch every game through the Final on ESPN+. 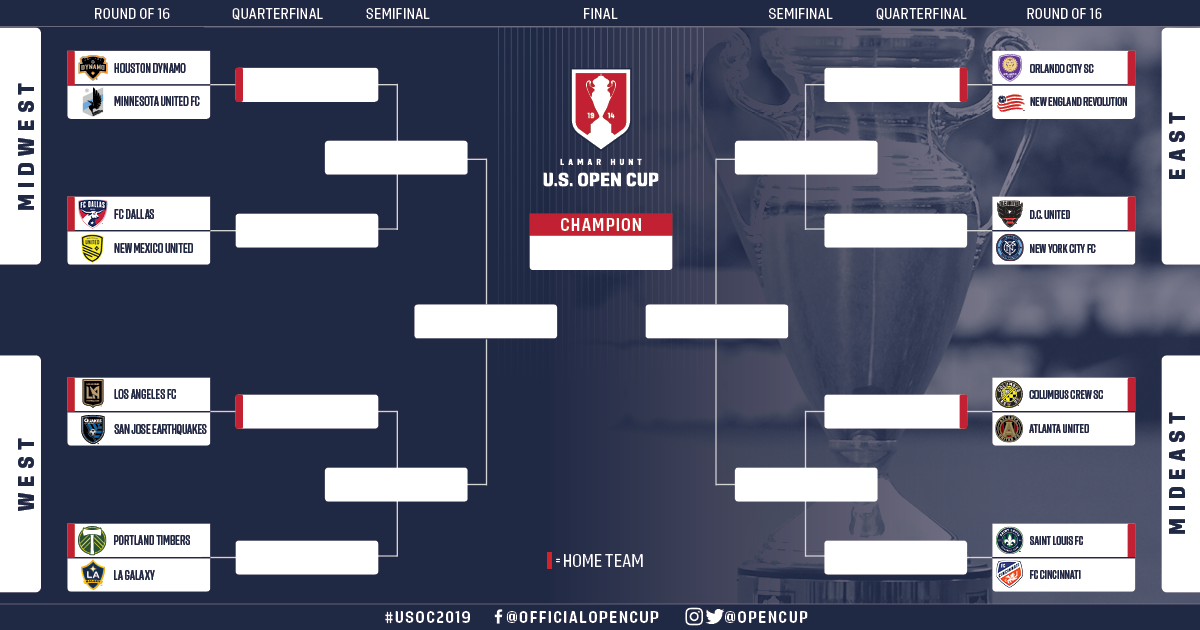 The Round of 16 will consist of eight games played June 18-20 and will be followed by the Quarterfinal Round set for July 10, the Semifinals on Aug. 7 and the Final on Aug. 27 or 28. A draw to determine the Semifinal hosts and the priority order for hosting the Final will take place on July 11.

The winners of the Round of 16 matches in each region will face each other in the Quarterfinal Round. During the Draw, U.S. Soccer announced that the Quarterfinal winners of the East and Mideast Regions will form the matchup for one Semifinal, while the last team standing from the Midwest will take on the West Region survivor for the remaining ticket to the Final. The result is a fixed bracket now in place through to the tournament’s championship game to be played on Aug. 27 or 28.

The 15 winners (13 from Division I Major League Soccer and two from Division II USL Championship) from the Fourth Round matches played to date plus the winner of tonight’s remaining Fourth Round game were divided geographically into groups of four in advance of the Draw.

In the Fourth Round match remaining to be played later tonight, Atlanta United FC (MLS) takes on the Charleston Battery (USL Championship). The game, originally scheduled for June 11, was postponed due to unplayable field conditions and will now be contested near Atlanta as a closed-door match at 7 p.m. ET this evening. Fans can watch the game on ESPN+.

About the Lamar Hunt U.S. Open Cup
In its 106th year, the Lamar Hunt U.S. Open Cup, U.S. Soccer’s National Championship, is the only high-profile competition in American team sports where amateur sides have the opportunity to face professionals in meaningful competition. The tournament is conducted on a single-game, knockout basis and open to all professional and amateur teams affiliated with U.S. Soccer and has crowned a champion annually since 1914. In 1999, the competition was renamed to honor United States soccer pioneer Lamar Hunt.