Sacha Kljestan was schooled in the folk wisdom and romance of the U.S. Open Cup early & he retains a deep affection for the 106-year-old tournament to this day.
Jonah FontelaJune 16 2019
Open Cup

“I love the Open Cup,” announced Sacha Kljestan, Orlando City SC creator and as big a homegrown star as you’ll find in Major League Soccer. His voice goes up a little when he says it, like he’s defending something. And he is, ahead of a Round of 16 clash with New England Revolution in the 2019 Lamar Hunt U.S. Open Cup. He sticks up for the 106-year old tournament that traces the peaks and valleys, grassroots zeal and passion, that helped soccer grow beyond a novelty in American sports. “You feel like you’re part of something bigger.”

It’s no surprise that Kljestan feels the romance of the Open Cup in his gut. He’s a sensitive player, among a rare breed of natural No. 10s. You get the sense he’s looking through a special kind of eyes when he peers out over the field, seeing the possibilities most miss and those opportunities that like to hide. 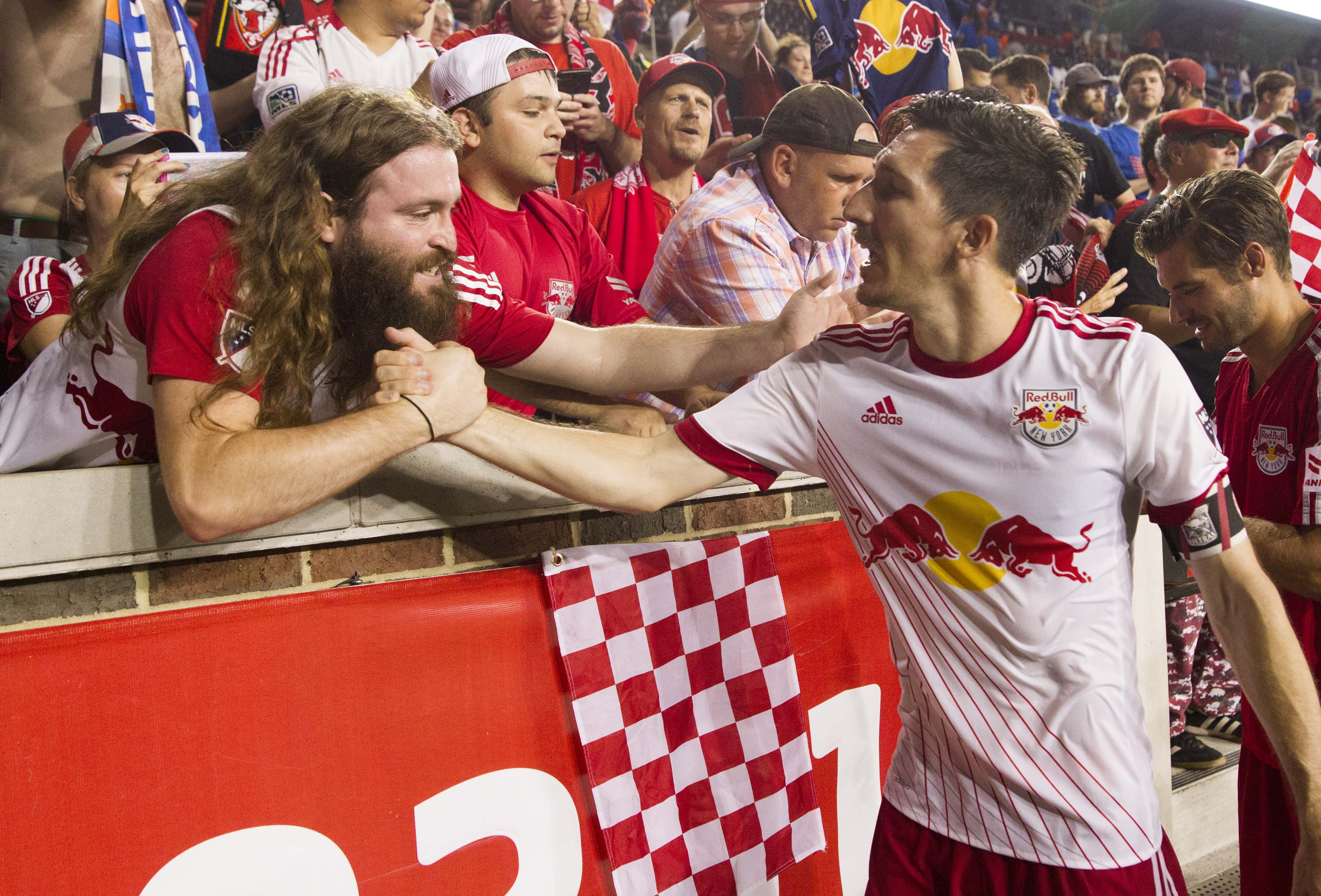 Kjlestan after winning a USOC2017 Semifinal with NYRB in Ohio

The Open Cup instilled itself early on in Kljestan. It was before he was a star and before the demands of professionalism made a job of a game. “I talked to my coach in college about the old days of the Open Cup,” said the 33-year-old schemer, 51 times capped by the U.S. Men’s National Team, drifting back to his three years at Seton Hall where he played and went to class, probably ate ramen noodles from a styrofoam cup. Back when he was just a kid with a special relationship with the ball. His coach was Manfred “Manny” Schellscheidt, once a midfielder for Elizabeth SC and twice a U.S. Open Cup champion in the early 1970s. “He was full of stories, and I loved to hear them,” added Kljestan, the son of a Bosnian-Serb immigrant and former professional. “He’d talk about going out to LA to play in the Open Cup and the old German American League in New York. He talked about the Finals and the trophy. There was something amazing about it.”

What it All Meant: First Taste of the Cup

Kljestan got his own first taste of the Cup in Southern California while back home on summer-breaks from college. “When I played in the PDL (the all-amateur Premier Development League now known as USL League Two), I remember how desperate we were to win the league because that got you into the Open Cup,” he said, chuckling a little, remembering rooting around the edges of the tournament he’d heard so much about, where if you were good enough and lucky enough you could play against a professional team. “In college, I remember one time we got to play against the MetroStars – just a scrimmage – but it made you feel huge, like a big deal. I still remember now what those games meant.”

Those memories, the ones that felt like dreams, were stirred when Kljestan dropped $500.00 in the GoFundMe can for 2017 U.S. Open Cup darlings Christos FC. “I don’t know why I did it,” he said of his donation to the team of amateurs from Baltimore who were low on travel cash but went on an epic Cup run two years ago. What’s more Open Cup than a team of old friends, with their headquarters in the back of a liquor store, good enough and gutsy enough to take on D.C. United in the Fourth Round? “Maybe I was just in a good mood that day, but their story got me thinking about my early days. Those Christos guys just playing on weekends and working day-jobs, and they went and earned a shot to play an MLS team.”

Kljestan slots it into the side netting 😎 to make it a brace @OrlandoCitySC 2-1 @Memphis901FC #USOC2019 pic.twitter.com/oyMIRD6v1S

That’s the romance. Right there. The word pops up a lot when talk turns to the Open Cup. The romance of part-timers piling in cars on Sunday mornings, playing through hangovers, and dreaming of a chance. The romance of a lower-league team getting hot and knocking off an MLS big shot. The romance of a time, captured in black-and-white, when the idea of making a living playing soccer was so far-fetched it would knock you off your bar stool. 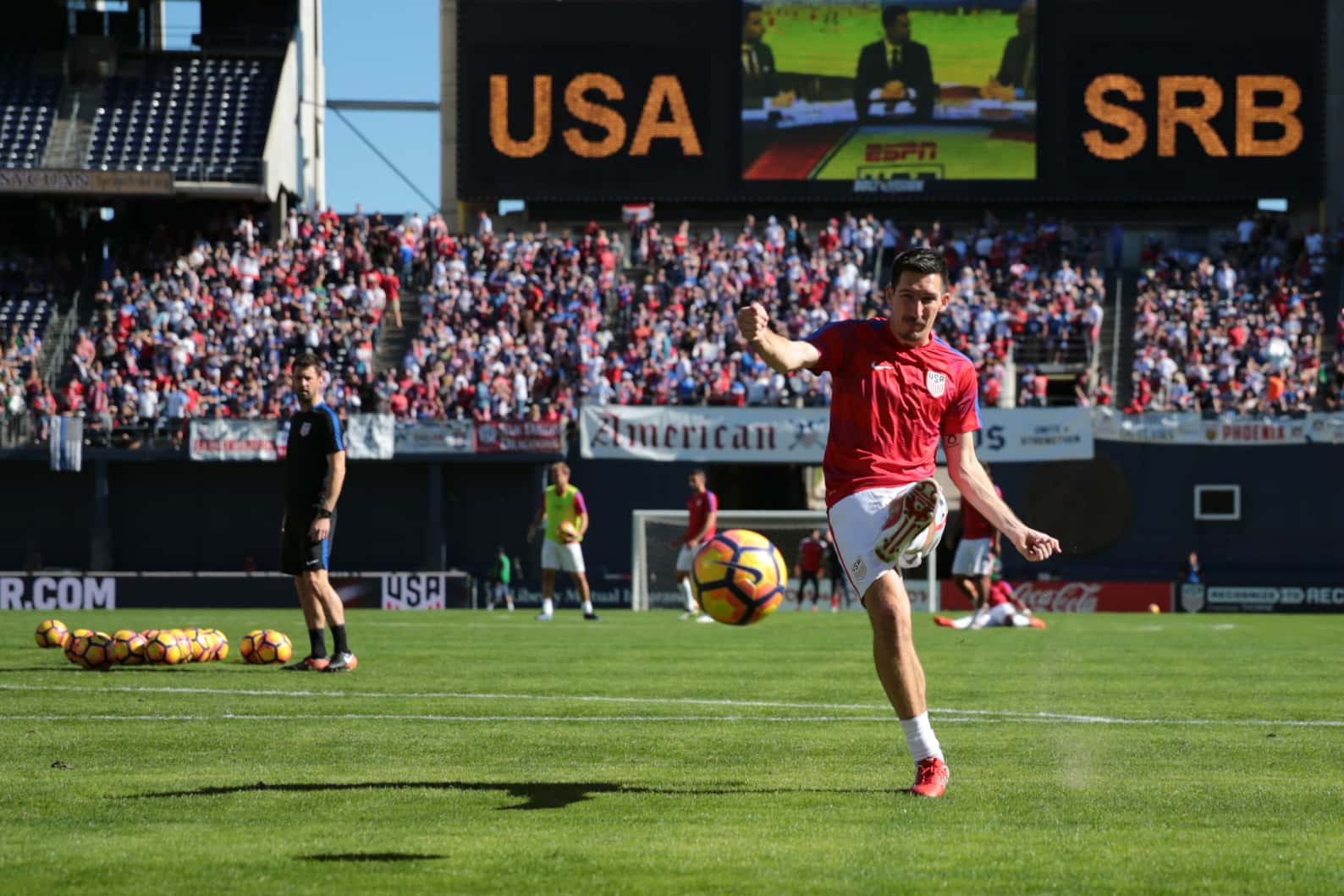 Kljestan in action for the U.S. National Team

There was nothing romantic about Kljestan’s time at Chivas USA, where he landed as a rookie pro after foregoing his senior year of college. The now-defunct MLS club is a cautionary tale. The Open Cup was ignored there. “We used to put out a reserve squad for every game,” said Kljestan, disgust still ringing in his voice. “We’d get bounced early every year. I never liked that and being in an Open Cup Final [a few years ago, with New York Red Bulls] – with a team that takes it seriously – is something I’m really proud of.”

Captain Kljestan is right back at ground zero of Open Cup action these days. He’s been smack in the heart of it. In 2017, with the Red Bulls, he was a runner-up after his side beat then-USL underdogs FC Cincinnati in the Semifinal. That Semifinal was played at Nippert Stadium in Ohio and sold out just shy of seven hours. Over 33,000 fans turned up to see their then second-division team challenge for a place in the Final. To move a step closer to their Open Cup dream, you get the feeling that the size of that day, and its place in the long lore and legend of the Open Cup, pleased Kljestan even if he was on the other side of the ball on the day. 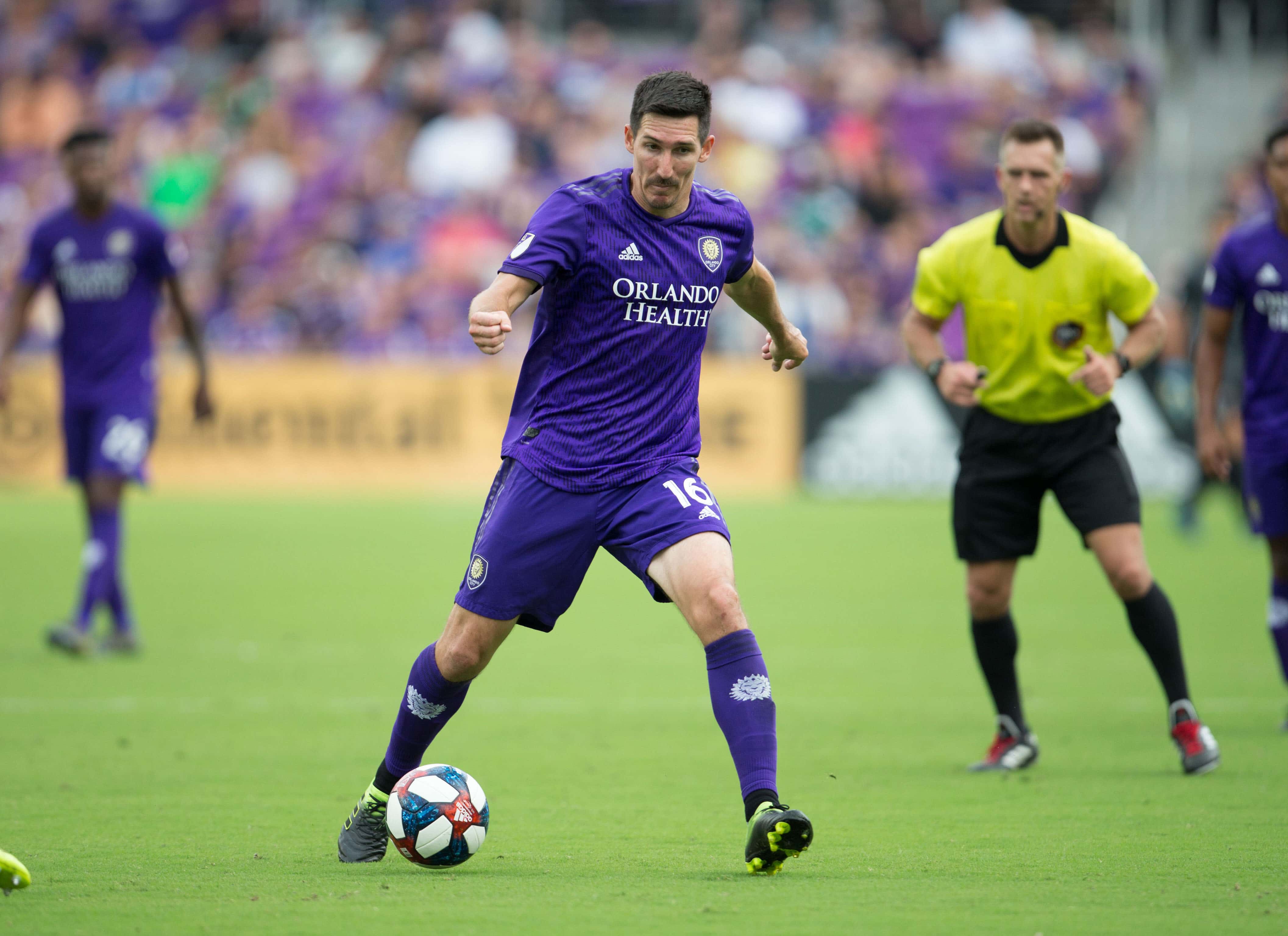 Kljestan is in his second season with Orlando City

He’s happy to slip between the pages of the competition’s history books. “It’s awesome. It’s big for soccer in our country, big for those and for the fans too,” said Kljestan who scored a pair of goals – one from the spot and a winner from the run of play – for Orlando City last week to set up a Round of 16 date with New England Revolution at home. “I think more needs to be done to promote the Open Cup because it’s a great tournament.

“When things go right for you in the Cup it can be something you can rally behind,” said Kljestan, who’s Orlando side is lagging behind in the league in eighth place in MLS’ Eastern Conference standings. “These games are intense and they all have a playoff feel to them. It’s only going to make you feel better when you come out the other side of games like that with wins to show for your efforts.”

The Cup Means Something

“This tournament has been around for over a hundred years,” added Kljestan, who’s hard to stop once he gets going talking about the Open Cup. “That’s a lot of history right here in our country. It goes back to all those little corners of the game back before there even were professional leagues. There were no pro teams back then, but someone always won the Open Cup. It means something to every player who ever won it and who ever played in it. It means something in this country.”

Mid-table in MLS, Orlando City have a chance for a deep Cup run in 2019

“Open Cup games can get nasty – everything’s on the line,” he said ahead of the Revs visit, the team he beat with the Red Bulls at Harvard in the 2017 Quarterfinal Round – as scrappy and ill-tempered a game in recent memory. “You have to be ready for that. That’s all part of it. It was like that in Belgium, I remember – with Anderlecht. We were the biggest team and whoever you played from lower down it was going to be the biggest day of their lives – their biggest game. You get their best. We’ll be going up against that in the next round. We’ll get their best. We have to expect it and we have to be ready.”

Kljestan spent four seasons in Belgium with giants Anderlecht. He won titles, went head-to-head with Zlatan Ibrahimovic in the Champions League and had some of those domestic Cup days when “you played a team from the lower divisions and you knew it was going to be the biggest game of their lives.” Now he wants to hold up that trophy, the same one his college coach did, and feel the joy only an Open Cup champion knows.