The Story So Far: USA’s Wild Run At The FIFA U-20 World Cup

June 6 2019
Featured
Following a thrilling comeback win over tournament favorite France, the USA is one of eight teams still standing at the 2019 FIFA Under-20 World Cup. Now set to face Ecuador in the quarterfinals on Saturday, June 8 (11:30 a.m. ET; FS2), a win would put the red, white and blue in prime position to match or exceed its best-ever finish at the tournament – fourth place in 1989.
With its win over France, the U.S. became the only nation in the world to reach the quarterfinals of the last three U-20 World Cup tournaments. On the books at some of the world’s biggest clubs, the deeply-talented USA roster is ready for more. Here’s what you need to know about the journey of the U.S. squad that’s making waves in Poland.

The USA punched its ticket to Poland at the 2018 Concacaf U-20 Championship last November in Florida. The competition serves as the World Cup qualifying tournament for North America, Central America and the Caribbean.
While the team’s journey started in Jan. 2018, the Concacaf Championship marked its first major competition, and the USA put on a dominant performance, rolling to eight straight victories and scoring 46 goals while allowing just two. The tournament’s crowning achievement came in the championship match vs. archrival Mexico. Midfielder Paxton Pomykal combined with U.S. Soccer Young Player of the Year Alex Mendez for two goals on either side of halftime to secure the USA’s second-straight Concacaf title.

In its World Cup opener, the USA faced a well-organized Ukraine side that made things difficult for the American attack. The U.S. dominated possession, but Ukraine capitalized on a long-ball, counter attack to take the lead midway through the first half. A beautiful team passing sequence saw forward Tim Weah set up midfielder Brandon Servania for an equalizer just six minutes later. Despite the USA’s control of the game’s tempo, Ukraine scored on a second half corner kick that proved to be the difference.

Needing a result after its opening loss, the USA responded in a big way with a shutout victory against Nigeria. Dictating the pace of play throughout, the red, white and blue broke through in the 18th minute when forward Sebastian Soto headed home a laser of a Mendez corner kick.

Sebastian Soto scores his first goal of the tournament and puts 🇺🇸 on 🔝 pic.twitter.com/m2V6ok1MaC

The USA doubled its lead shortly after the break, when left back Chris Gloster made a cutting run and teed up club teammate Soto for his second of the game. Soto became the 10th U.S. player to score two or more goals in a U-20 World Cup game while goalkeeper Brady Scott and the U.S. defense did well to keep the clean sheet.

Sebastian Soto scores his second of the game and doubles the USMNT's lead 🇺🇸 pic.twitter.com/uOsBAKvZwx

The USA didn’t play its best soccer against Qatar, but got the job done to finish second in its group and earn a spot in the Round of 16. While Qatar had dropped its first two World Cup games, the Middle Eastern side put out a dogged effort, causing goalkeeper David Ochoa to make some highlight-reel saves.
After a scoreless first half, forward Ulysses Llanez provided a spark off the bench and the USA found its winner in the 76th. Mednez jumped on a soft pass deep in Qatar territory and played it up to Weah, who took a touch and sent the ball into the back of the net. Weah became the 10th U.S. player to score in both the FIFA U-17 and U-20 World Cups.

Undefeated France awaited the U.S. in its first game of the knockout stage. Sporting a line-up of seasoned pros and thus considered the tournament favorites, Les Bleus presented the USA’s biggest challenge yet. To further complicate things on a hot and humid day, the U.S. was without Mendez and defensive midfield anchor Chris Durkin due to suspension from yellow card accumulation.
Despite the adverse conditions, the U.S. struck first against the European giants. Springing a counterattack in the 25th minute, midfielder Richard Ledezma galloped through the midfield before firing a pass that split the France defense to Soto, who finished to the far corner.

Richard Ledesma and Sebastian Soto combined for the USA's opening goal in their Round of 16 game against U-20 World Cup favorites France.

It's currently 1-1 at halftime. Don't miss the second half LIVE on FS2! pic.twitter.com/rykdFBpjfY

France drew even just before the half and took the lead in the 55th minute, but a pair of attacking subs in Llanez and forward Justin Rennicks buoyed the U.S. midway through the second half. After a cooling break around the 70th, Llanez sparked the American equalizer a few minutes later, dishing to Weah who slipped a pass through a swarm of defenders to Soto inside the box. The striker smashed it home for his second of the day and fourth of the World Cup, good for second in the tournament’s Golden Boot race.

Tim Weah this time with the lovely assist as the USA have tied it up against France, 2-2, in the 2nd half! pic.twitter.com/A0ZvR3uQsk

Off of a deflection after a long-range shot, defender Sergino Dest sent in another try from distance in the 83rd. While the French goalkeeper made a diving stop, the rebound fell to an onrushing Rennicks, who hammered it home to complete the comeback.

Justin Rennicks cleans up the rebound and gives the USA a 3-2 lead. The Baby Yanks are minutes away from the U-20 World Cup quarterfinals! pic.twitter.com/s0Ng4aQmLT 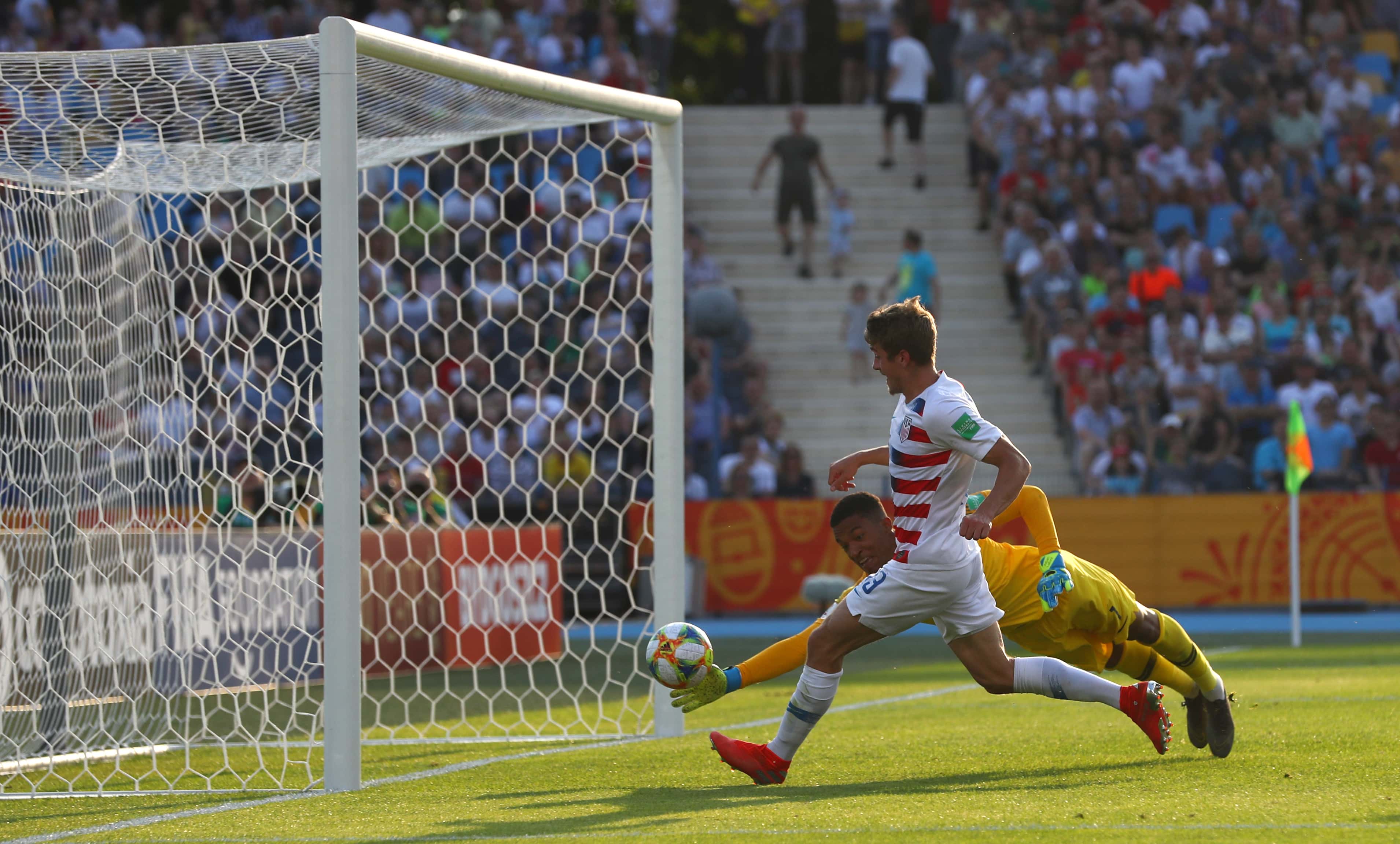 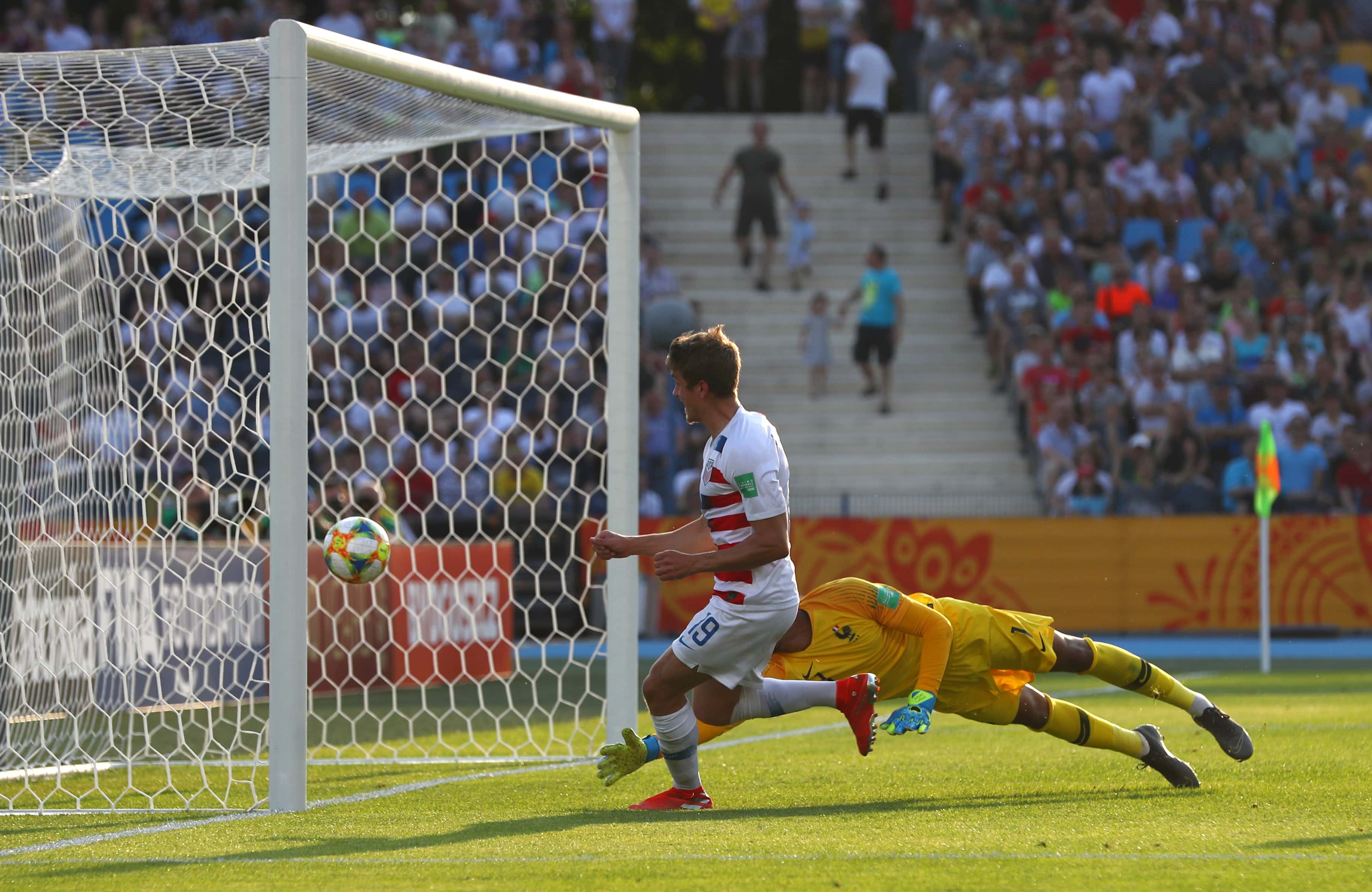 UP NEXT: QUARTERFINAL VS. ECUADOR

Another challenge awaits the USA in its elite eight match-up against South American champion Ecuador on Saturday, June 8. While La Tricolor got off to a slow start in the group stage, Ecuador rolled traditional South American power Uruguay 3-1 in the Round of 16.