Livewire Ghanaian Latif Blessing has a special love for the U.S. Open Cup – and he’s eager to win one with LAFC the way he did with Sporting KC.
Jonah FontelaJuly 1 2019
Open Cup

Tiny as he is, you can’t miss Latif Blessing. The man stands out. He zips about the pitch like a wind-up toy wearing a smile too big for his face and teeth too big for his smile. Blessing isn’t the finished article – he’s still young and he’s hungry – and he won’t bore you with one-game-at-a-time platitudes or freeze-dried sound-bytes. He’d rather tell you why he wants to dance with the Lamar Hunt U.S. Open Cup again, about how high he can jump and why he “just loves” America’s oldest soccer tournament.

“I’m a young guy, so it’s good for me to be going for a second trophy,” said the hybrid winger-striker, just 22, who scored three goals for Sporting Kansas City in 2017 en route to the club’s fourth Open Cup crown. “I have to work hard if I’m going to dance with that trophy again.” 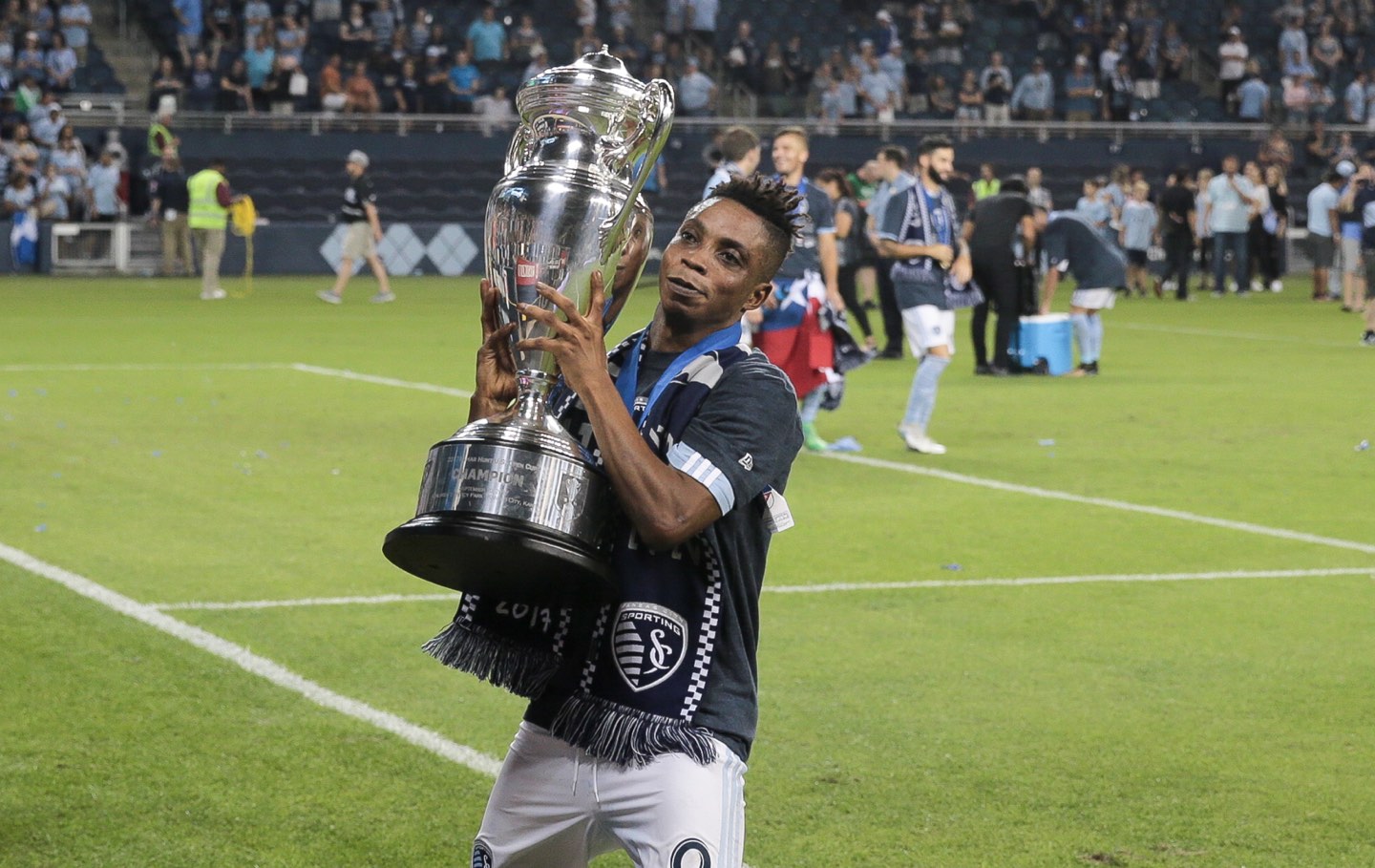 He’s not being figurative here. He really did dance with the trophy, almost as tall as the five-foot-five he’s generously listed at in league literature. Video of it flooded Twitter after 2017’s September Final. Blessing’s pride was unmistakable and his joy unconfined. And he was no passenger in the game, a tight 2-1 contest. KC’s little big man scored the opening goal with this head, in among a forest of tall and brawny Red Bull defenders. It might have been the sheer perfection of Graham Zusi’s cross, but the shortest player on the field, in the running for shortest MLS-wide, rose highest to nod home that day. “Everyone loves it when a little short guy like me gets a goal like that. But back in Ghana, it was my secret weapon. No defender really expected me to go for those high balls, so I just started going for them,” he explained to ussoccer.com, laughing at the memory of his unlikely aerial exploits. “I surprised them all the time with it.”

He grew up playing for fun, and welcome diversion, in the rural southeast of Ghana. His home village of Nankese is a small place with little to do, but passion for soccer runs deep there. “It was tough; the pitches were really rough and beat up and you had to deal with that,” he remembers of the days before he moved to the capital city, Accra, and Liberty Professional Club where he graduated from the youths to the first team at the tender age of 16. It wasn’t long before he was voted best player in Ghana’s Premier League in 2016. “Now here in MLS, the pitches are beautiful and I have no excuses! I have to play good!”

Blessing is a slippery customer. He’s full of surprises. He takes up unusual positions, wrong-footing defenders with his close control. He’s comfy running the channels, or in the small spaces, and he’s surprisingly durable. When the ball looks to have evaded his touch, he wriggles like elastic to recover it. He forces defenders into unnecessary fouls and has a sixth gear few can match. It’s no wonder he’s come to love the Open Cup – a competition where it’s all on the line every time out. It’s not about the long haul or the big picture. It’s about right now. Right here. There’s no collecting points. It’s the closest thing to playing the game the way you did when you were a kid. No league tables or conference six-pointers. Just a winner and a loser.

“Cup games are different; they feel different,” Blessing admitted, hoping to bring the Cup to LA after suffering the cruel heartbreak of missing the crucial penalty in a shootout loss to eventual champions Houston Dynamo in last year’s Semifinal. “There’s no draws. You can’t go away and get a point and then come home and win. It’s not like that – you lose and you’re out, so you better not lose. You have to put in all the effort to make sure you don’t. That’s what I do. I know it from when we won in Kansas City. I keep asking my teammates to help me. To help me make this happen here.”

You can almost imagine it: Little Latif, running up with advice for an old pro like Carlos Vela or the team’s schemer supreme Lee Nguyen. You can see him enlisting them all to help him in his bid to win another Open Cup. So he can dance with that big trophy again. You can safely assume there are a few good-natured rolled eyes around Blessing on the training ground – but there’s a lot of affection too, the kind of smiles and pats on the back saved for a little brother who wants it all and wants it now. 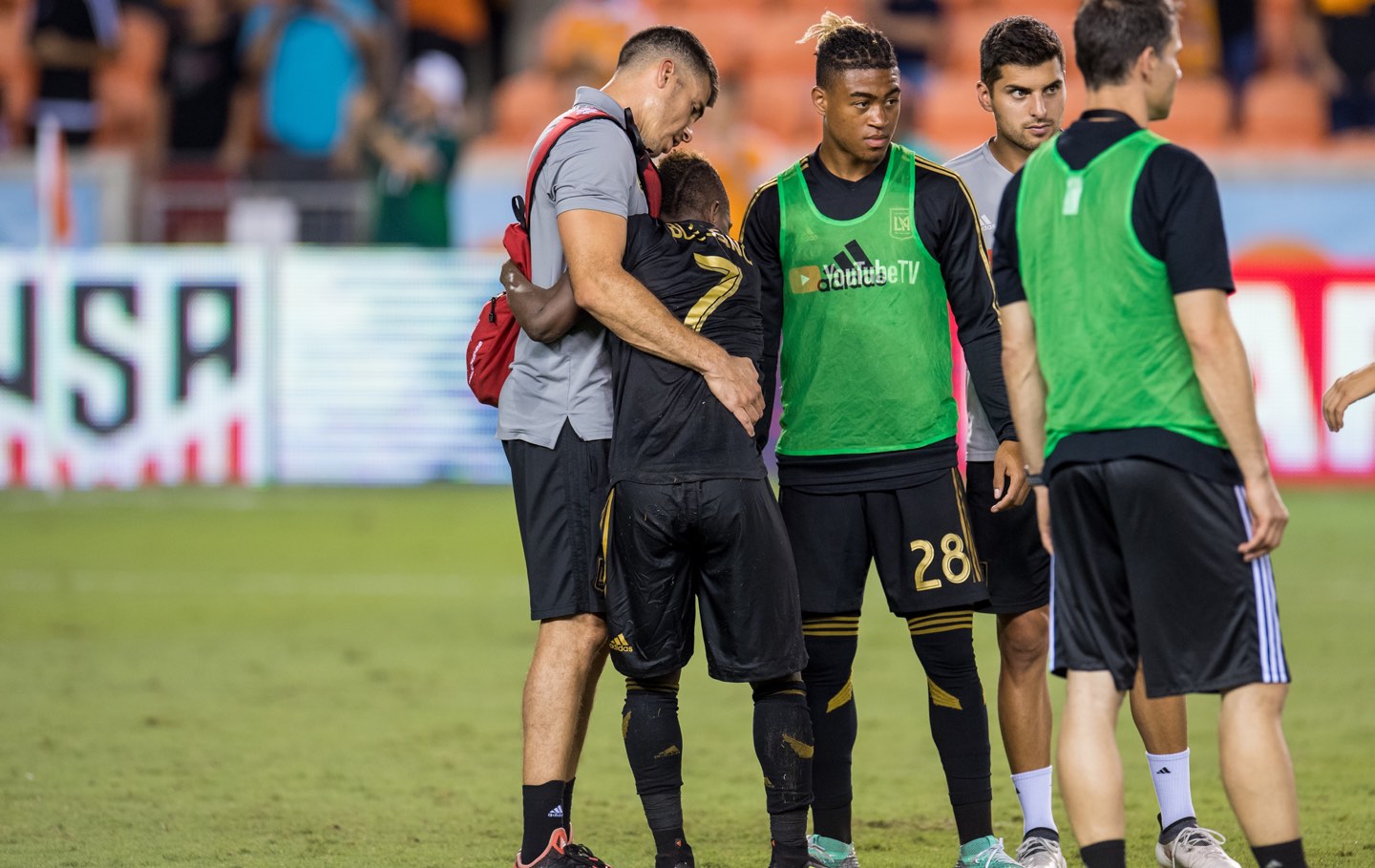 “You can ‘t believe how fun it is playing in a team like this one, with attacking guys like Lee [Nguyen] and [Carlos] Vela,” added Blessing, who was one of the best players on the field in LAFC’s tricky 3-1 Round of 16 Open Cup win over a motivated San Jose Earthquakes. He tracked back 80 yards to snuff our lightning counter-attacks and got well and truly knocked around in performance that showed both his grit and his skill.  “You want to get the ball and go forward all the time in a team like this.”

Blessing still has lessons to learn. And playing under Bob Bradley, the former U.S. National Team boss and avowed Open Cup advocate, he’s learning them. The manager’s faith was made clear a last month when Blessing’s contract was extended through 2020.“Latif’s improved tremendously since he’s been here,” said the coach, who takes long pauses before answering to make sure he says exactly what he means. There are still things he can improve. He can still get better. But he has confidence and he knows what it means to be in the Open Cup.” 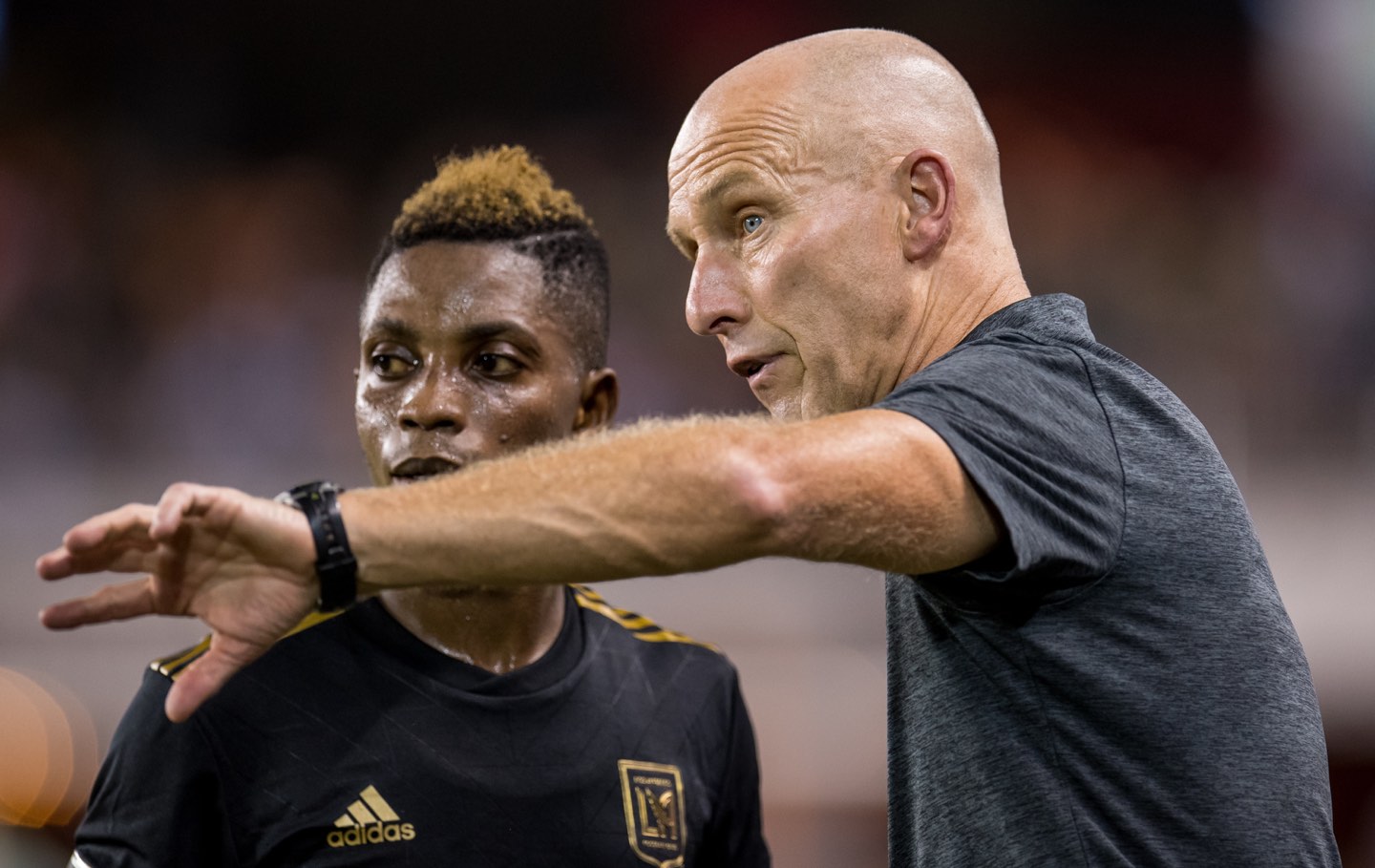 It’s hard to picture an odder couple than Bradley [bald, stern, serious] and Latif Blessing [a shock of dyed hair, gregarious, fun], but they both have that same hunger for the Open Cup trophy. Most likely, Bradley won’t dance with it if LAFC bring it home to SoCal after coming so close last year. But you can be sure he’d watch on with a grin while Blessing does. “[Bradley] came around to me and said, ‘Latif, Open Cup is important to us.’ And I knew what he meant because I love it too,” said Blessing. “Five matches and you can pick up a trophy. That’s amazing. I told him. I’ll put my ass on the line. I’d do anything to get it again.”

LAFC is a club with a roster of stars befitting its proximity to Hollywood’s dream factories – but little Latif Blessing, up-and-coming and full of what’s possible, is having another tour de force in among those household names. He wants the Cup because he wants the Cup. He’s hungry because that trophy is there to be won and why not put it all on the line to win it?  “It’s right there,” he said, now facing a Quarterfinal clash with Gio Savarese’s in-form Portland Timbers for a place in a second straight Semifinal. “I made a promise to the fans that we’d go for the trophy and I want to keep it.”