Brandon Vazquez learned lessons about passion and patience early at the Mexico/U.S. border – and he’s putting them to good use now as he dominates the 2019 U.S. Open Cup with MLS champs Atlanta United.
Jonah FontelaJuly 6 2019
Open Cup

“Some days I’d wait in line for five minutes and other days it was three hours,” young Atlanta United striker Brandon Vazquez said of his daily treks from California to Mexico and back to train with his first club side in Tijuana. “It was tough. It was tedious sometimes, but I learned a lot about myself.”

Those lessons were about commitment and passion, the burning desire Vazquez had to drag himself up at 5 am every day and hoof it over the line. Born in Chula Vista, California, the striker – who holds dual citizenship – had to make sure he gave himself plenty of buffer time to get to those 7 am training session with the Xolos. 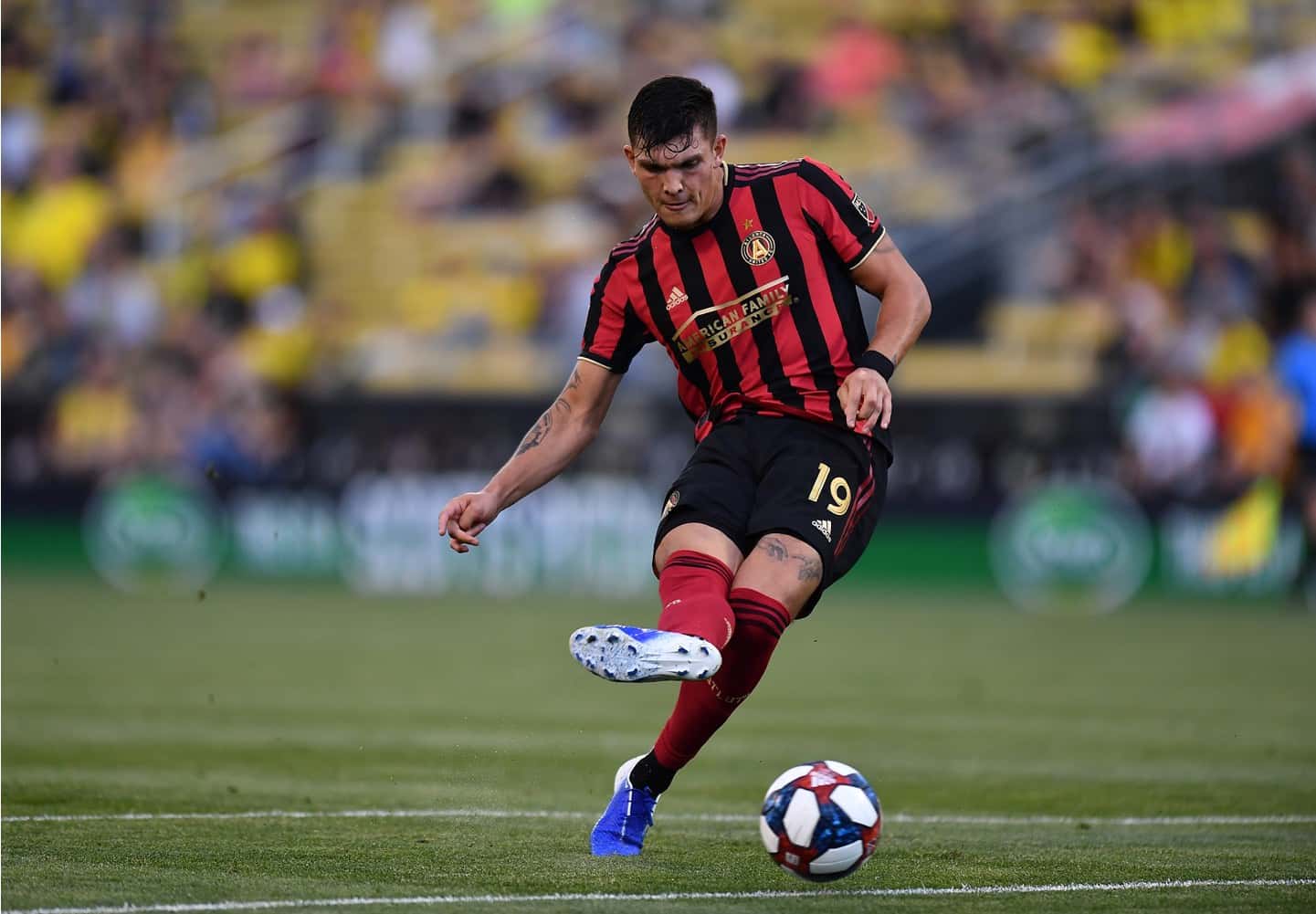 “You knew it the second you crossed over into Tijuana – there was never any confusion about whether you were in the U.S. or in Mexico,” said Vazquez, now in a breakout year in Major League Soccer and the 2019 Lamar Hunt U.S. Open Cup. “My parents drove me to the border every morning and dropped me off. Then I’d walk across. Once I was in Mexico, I took an Uber to practice.”

The longest waits were on the way back into the States. Vazquez laughs when describing the back-ups and long lines and how on some days, the sun would set and he’d still be in that limbo on his way back to his hometown near San Diego. “I learned about patience in those lines for sure,” he said. “But mostly what I took from it was the passion I had for the game. The passion to be at training on time and learn what was to be learned.”

He learned much during his time in and out of Tijuana. Vazquez turned from a thin kid into a 6-3, 175-pound goal-hunter who could hold off the most determined defender. In 2015, he made his first appearances for Tijuana in Mexico’s Copa MX (the country’s domestic cup) and he trained with he first team for the rest of that year. Still 16, it was an opportunity to learn even more from grown men and seasoned pros. It wasn’t long before then U.S. U-17 coach Richie Williams was calling.

“Training with the first team [Tijuana] helped me a lot with my confidence when the National Team calls started coming,” said Vazquez, now 20, who scored two goals for the U.S. at the 2015 U-17 World Cup in Chile, where he got his first taste of big passionate crowds like the ones he’s delighting now at Mercedes-Benz Stadium in Atlanta. “With the U-17s and U-20s, I’d just tell myself that I’m good enough to be training and playing with the first team at Tijuana, so I can handle this. I’m better than this – and I’d just go out and kill it.” 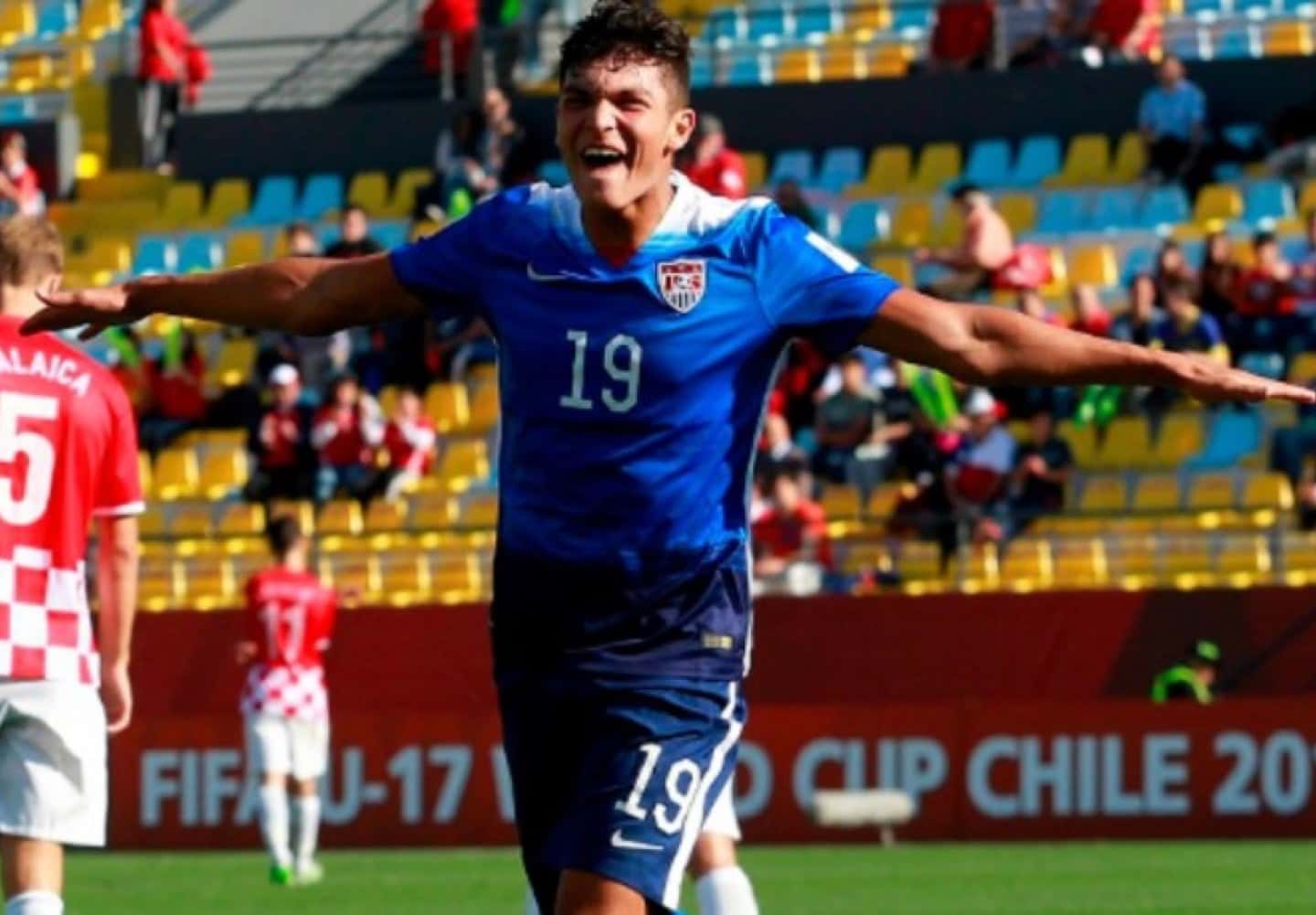 Vazquez’s debut in Mexico’s Liga MX came in August of 2016 when he was still just 17. Four months later, one-time Barcelona boss (and current Mexico coach) Tata Martino brought him to a new club just getting on its feet in Atlanta. Now he’s on fire. The forward, forged on both sides of the border, is now the undisputed deputy to star striker and 2018 MLS MVP Josef Martinez. He scored one minute into his MLS debut. Now he’s got five goals in his last three games with the defending MLS champions and he’s making a huge impact in the 2019 U.S. Open Cup.

“Anybody can see that he has what you need to be a serious striker,” said Frank De Boer, who Vazquez calls “a nice man with interesting ideas” about the game. “He’s [Vazquez] strong, he can hold the ball, he can be a rest point when we kick the ball long. Of course, his work rate is fantastic and he has the momentum right now.”

Those old lessons Vazquez learned on his daily border crossings are serving him well now. Hungry to make sure it wasn’t all just a succession of wasted hours, he’s taking his chances when they come. No matter how long he was to wait.

“It was pretty weird when we got to Charleston and went out for warm ups. The field was in really bad shape…there were holes everywhere and the ref said it wasn’t safe to play,” said Vazquez about Atlanta’s Fourth Round Open Cup contest against the Charleston Battery that was abandoned due to poor field conditions because of the numerous rain storms that had passed through the area. “So we bussed back home that night. It’s a six-hour drive and we got into Atlanta around 3 a.m.” 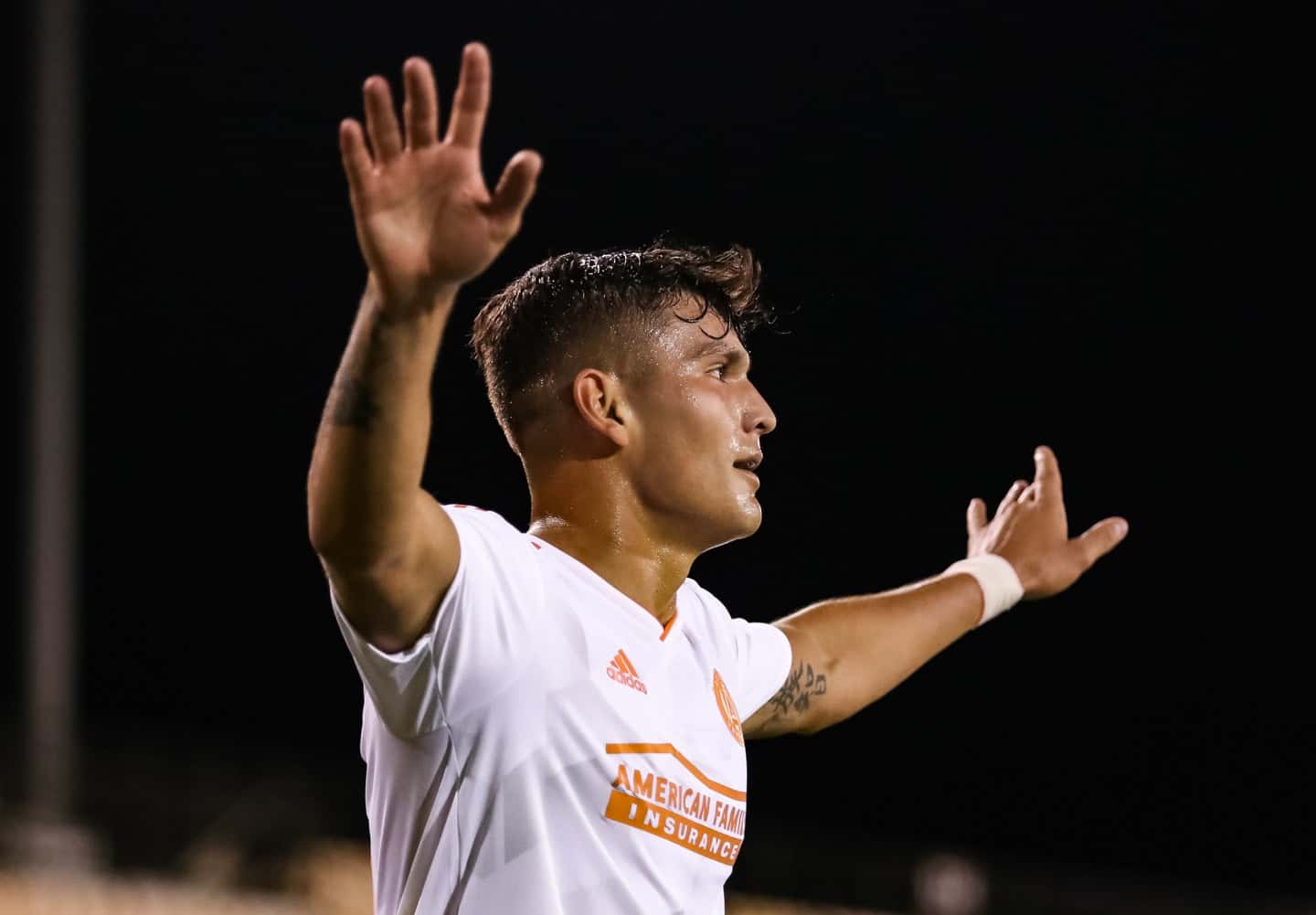 The game was rescheduled in haste and organizers decided the teams would play at Fifth Third Bank Stadium on the campus of Kennesaw State University behind closed doors the very next day. None of it rattled Vazquez – not the wait, the long drive, the change of venue or the weirdness of the whole scene. He was just back from two months out with an MCL tear and the tedium of rebuilding the muscles around the ligament. “It’s soccer and stuff like that will happen when you least expect it, so you have to be ready,” he said of the game, where he came off the bench, kept his cool and scored two late goals in a come-from-behind win. “You have to adapt and once you get on the pitch you have to be focused and have the mentality to win. You have to push through it.”

Vazquez is a young man ready for big things. He’s durable and up to all the challenges that emerge. He showed it again in the Round of 16 in Columbus against the Crew. “That was pretty bizarre too. I’m not sure I’ve ever seen rain like that,” said Vazquez of the game that was halted for nearly an hour due to torrential rains in Ohio. “It was so hot and humid in the first half and then when we came out after the break, it was pouring so hard. Luckily I scored right before we had to go back into the locker-room for the delay.” 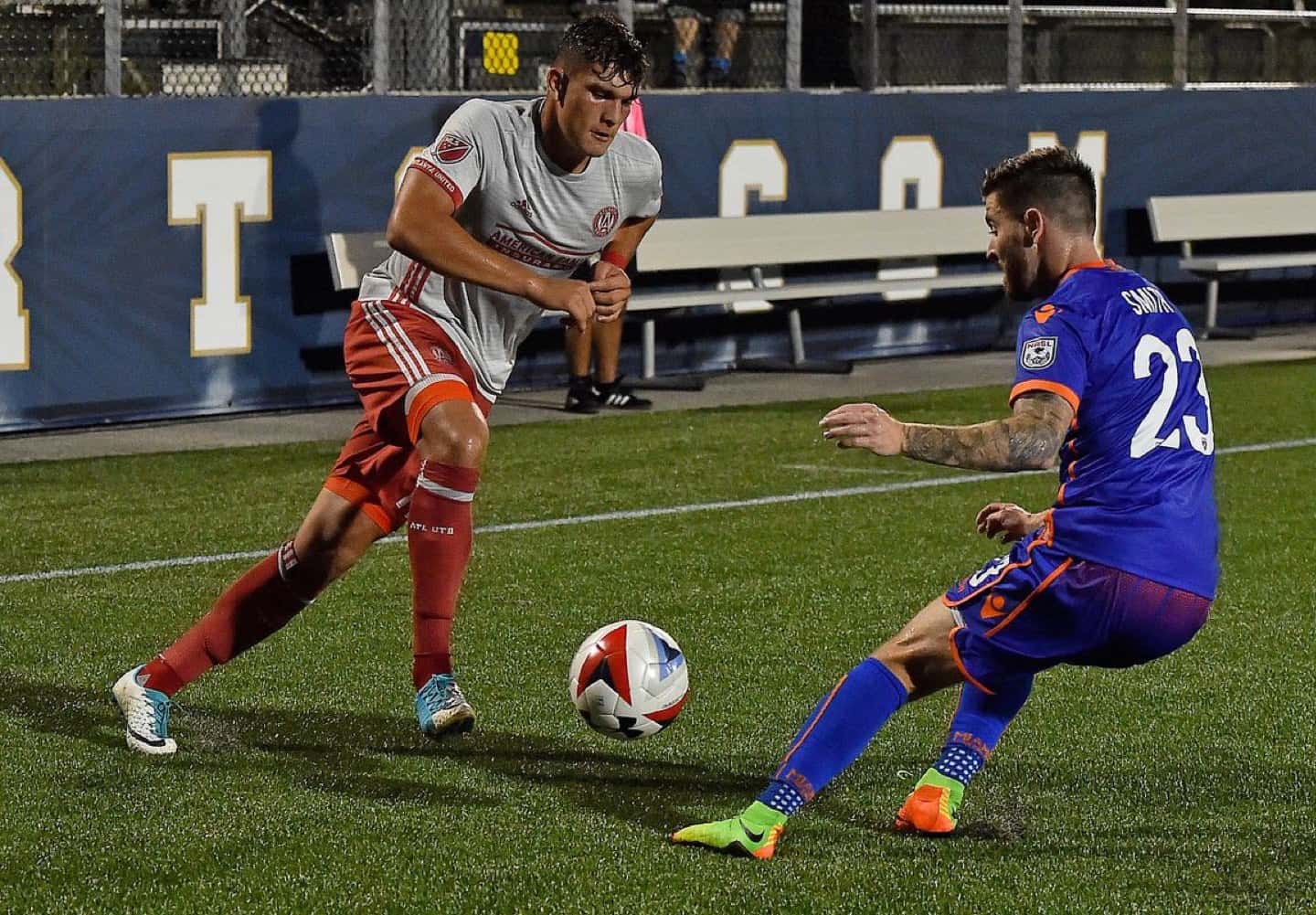 Built sturdy, Vazquez is a handful for any defender he comes up against

Vazquez was outstanding. He scored twice in the tense 3-2 win to set up a Quarterfinal date with underdog darlings Saint Louis FC back in Kennesaw, Georgia. Mature as you can be at 20 years of age, Vazquez won’t let the fact that he’ll be up against a second-division USL Championship underdog get him off his game with a place in the Semis on the line.

“No. No. You can’t let your guard down,” he said with the bearing of an old veteran, reaping the benefits of long hours spent dreaming of these very days. “Because when you least expect it, you’ll get bit. It happens when your head goes down and these games [against lower-level teams] are really dangerous. You need to be ready for what they bring you. You can’t slip up.”