Sacha Kljestan was schooled in the lore and legend of the Open Cup by his college coach Manny Schellscheidt – and now he’s hoping to gain ground on his former mentor’s two titles by winning this year’s USOC with Orlando City.
Jonah Fontela July 28 2019
Open Cup
“It was obvious from the second you saw him that this kid could really play,” Manfred Manny Schellscheidt remembered of the first time he spotted the teenage Sacha Kljestan on a soccer field. “The ball never slowed him down and he always knew how to find the game. With Sacha on the field, everyone else just got better.” 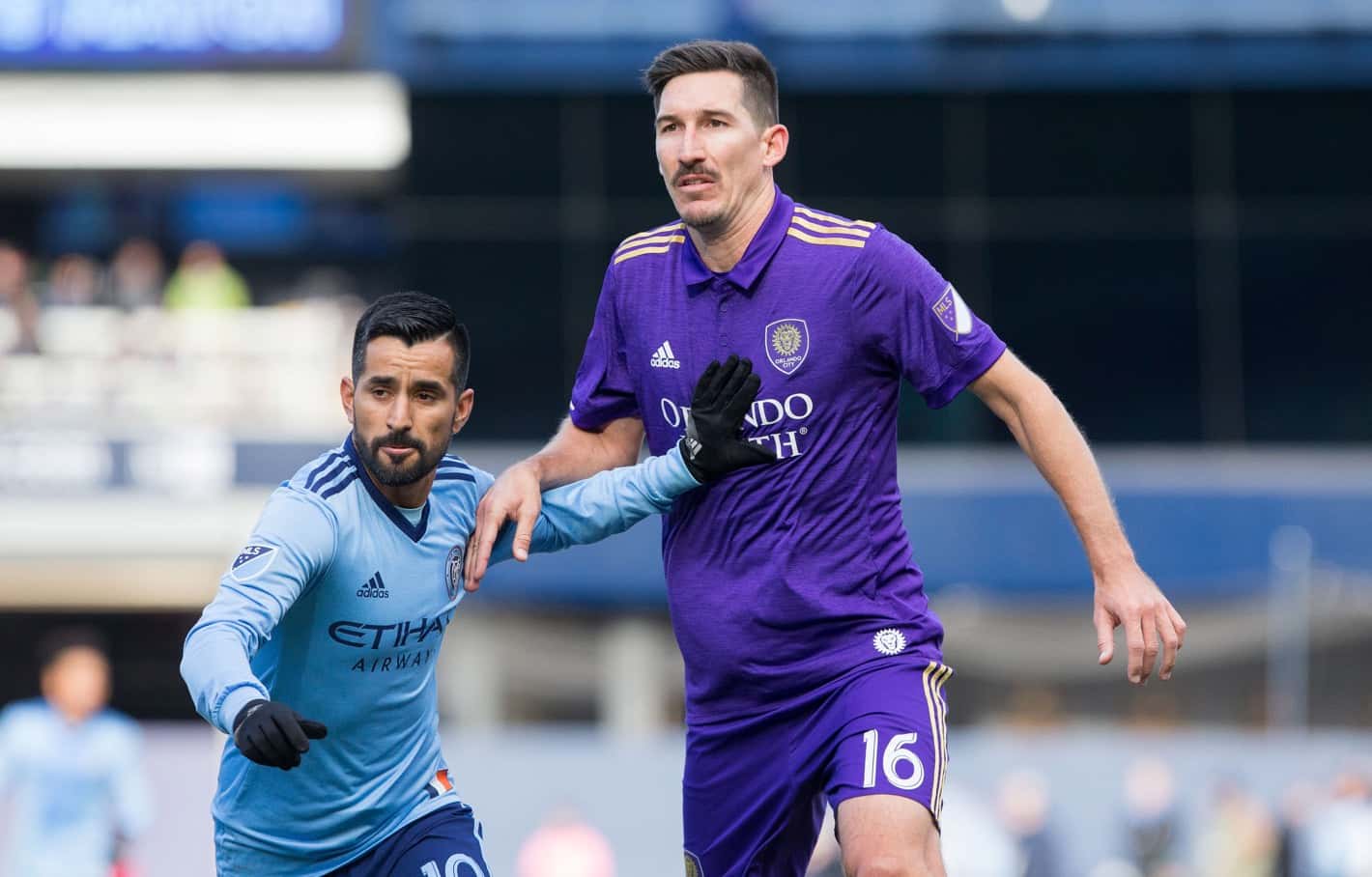 Sacha Kljestan is Orlando City’s playmaker
“I wanted to know what his deal was right away,” said the man who’d seen and done so much in the game – lifting two U.S. Open Cups and a North American Soccer League (NASL) title and briefly holding the reins of the U.S. National and Olympic teams.  Schellscheidt set up a visit to South Orange, New Jersey for young Kjlestan and made sure the skinny creator – one of the purest No. 10s he’d seen in years – came to suit up for him at Seton Hall. “I was really taken with him and I wanted him to come play for me. It was that simple.”

“I talked to Manny a lot in my college years about the old days of the Open Cup,” said Kljestan, now 33 and on the eve of playing in his own Lamar Hunt U.S. Open Cup Semifinal (his second in three years) with Orlando City. He drifted back in his mind to those three years at Seton Hall, where he played under Schellscheidt and went to class, probably ate ramen noodles from a styrofoam cup. Back when he was just a kid with a special relationship to the ball and before his talent took him to Anderlecht and the UEFA Champions League and 51 caps with the U.S. National Team. “He [Schellscheidt] made it exciting. It’s this exciting tournament [the Open Cup] and it makes you feel like you’re part of something bigger – the history of the game in this country. I mean it’s been around for over a 100 years and that’s a lot of history. It goes to all those little corners of the game back when there was no professional leagues.” 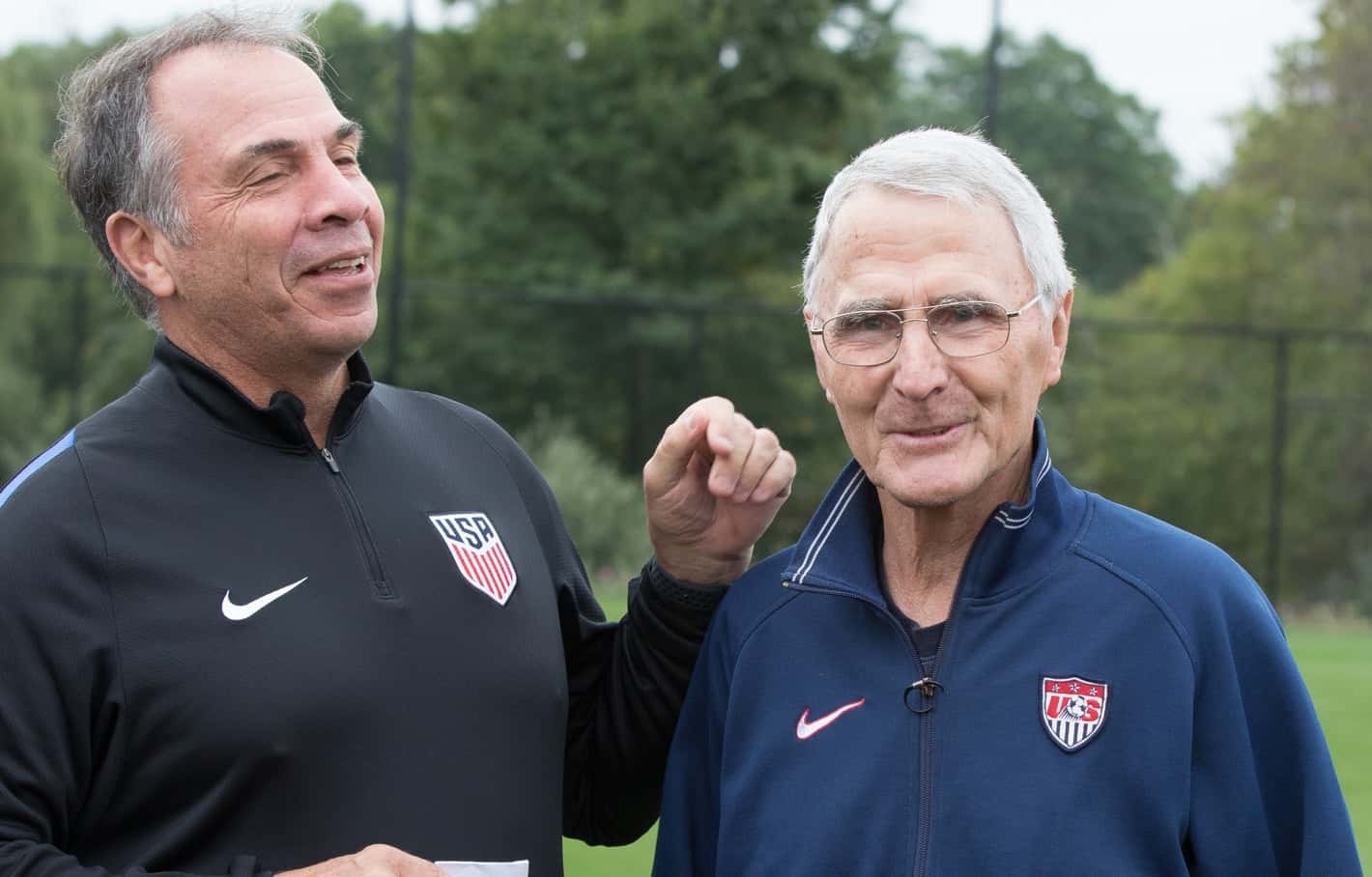 Manny Schellscheidt (right) with former U.S. National team boss Bruce Arena
Schellscheidt, now 78, occupied his own little corner of the game in the 1960s and 70s. He remembers those days vividly, playing the game he loved in a new country and winning a pair of Open Cup titles in 1970 and 1972 with Elizabeth SC of New Jersey. “The club [Elizabeth] took care of my flight over, an apartment and they got me a job,” said Schellscheidt, who arrived in the States from Sollingen, Germany in the middle Sixties. “The German-American League [now Metro NYs Cosmopolitan League] was incredibly strong with very good players – some of them internationals from the countries they came from. For us, in the ethnic leagues, the Open Cup was the only nationwide competition. If you won it you were national champions. So Cup days were big days.”

It’s no wonder young Kljestan was fascinated by his coach, a romantic spinning yarns of those old rough-and-tumble days. Schellscheidt’s a born storyteller and his recall is undiminished by time. He remembers walking the field at the Metropolitan Oval before games – the Manhattan skyline in the middle distance and an iron railing around the field – to dig out the largest stones. He’ll never forget the time Mexico’s Cruz Azul came to play in a Concacaf Champions Cup game and walked in confused circles on the field at Randall’s Island wondering where the stadium was, because it couldn’t be the dirt patch they were standing on. He remembers how it got “really rough sometimes on Sundays” and how “they’d come for your legs so you had to be quick and smart.”
Schellscheidt doesn’t remember any showing off. It just wasn’t the way on the Ovals back then. “No one did any of the weird celebrations like they do now after scoring a goal,” because it was their job and that was that. He worked in a machine shop and trained at night because that’s how the game was back then in America. He grew up on a farm in Germany and even after a day in the field he had enough energy to play. “When it’s something you love, you find the energy,” Schellscheidt said with a chuckle. 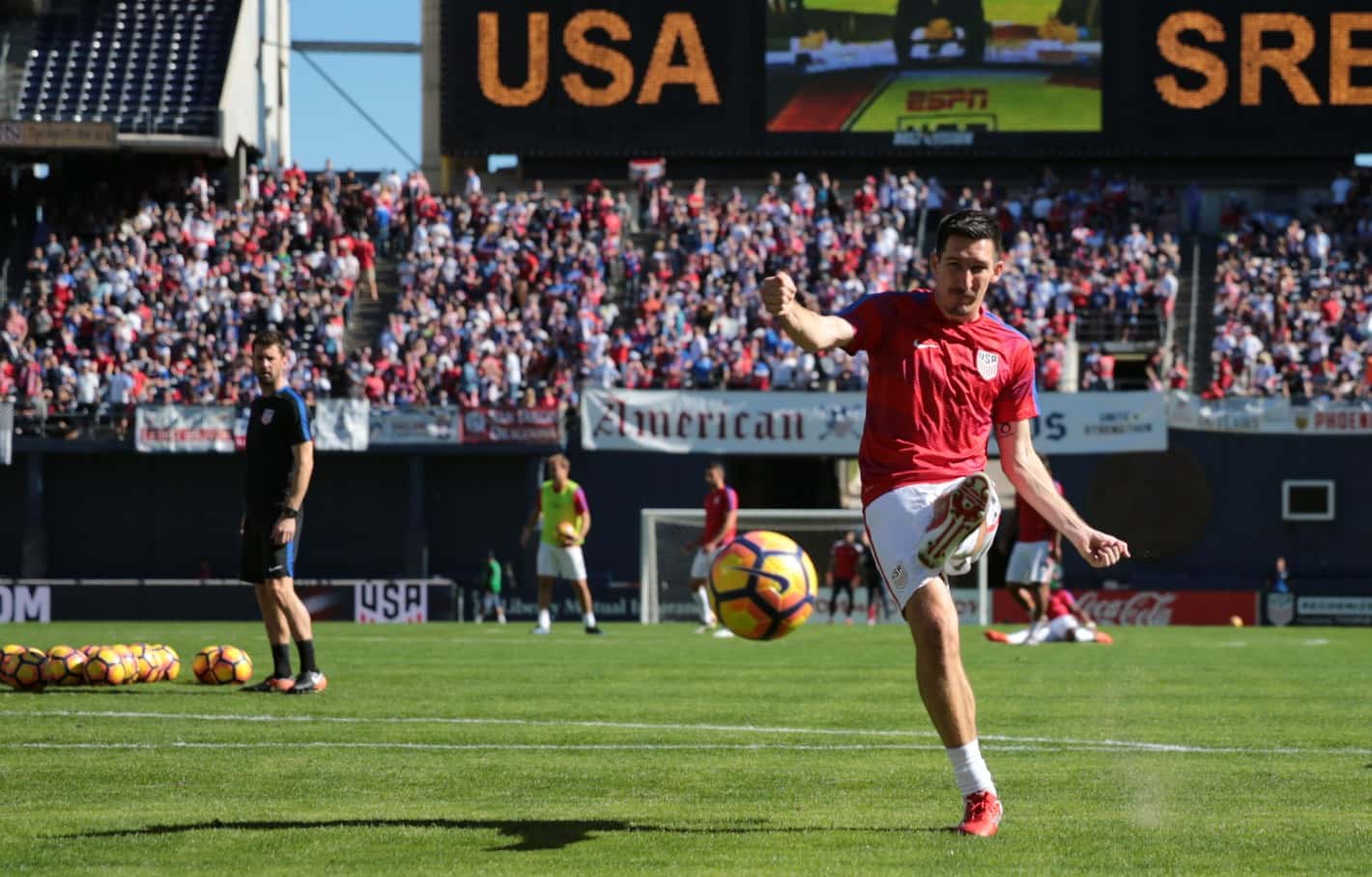 Kljestan has been capped 51 times for the U.S. National Team
What he remembers best are the games, his teammates and his two Open Cup trophies. He estimates the crowd at the 1970 Final in Manhattan was around 5,000-strong to see his Elizabeth SC come from behind to beat LA Croatia of the Greater Los Angeles Soccer League (GLASL). “There was no trouble with those fans rushing the field after the final whistle, and I still remember the chaos of it,” said Schellscheidt from his home in Union Township, New Jersey. “We all went to the clubhouse and had a few beers after. That was always the way, win or lose, and it’s special to remember even now.”

Two years later, in 1972, Elizabeth beat another California team – this time the San Pedro Yugoslavs 1-0 in Farcher’s Grove, New Jersey. “It was so much fun playing in that team,” Schellscheidt said, his feelings and memories still fresh. “There was no mystery with the way the ball would move because everyone could really play. We were a real team from back to front and what a fun thing that is to be a part of.”
All of Schellscheidt’s sepia-toned memories, the detailed vignettes of a long-gone era, got passed on to Kljestan, who now stands on the brink of matching one of his old coach’s achievements. A win in the Semifinal at home against defending MLS champions Atlanta United on Tuesday, August 6 [Live on ESPN+] would send Orlando City to a first-ever Open Cup Final.

“I love the Open Cup,” said Kljestan, his voice rising like he’s defending an unpopular position. “I love the history of it and reading about the history of the Cup. There are all these little dynasties from the 20s and 30s and 40s and 50s. I also like playing for a club that takes the Open Cup seriously. I remember when I was with Chivas USA, we used to put out a reserve squad and get bounced early. I never liked that. Being in the Open Cup Semifinals is something I’m really proud of.”

The Exploria Stadium in downtown Orlando is a long way from Randall’s Island and the Met Oval of the old days, but Schellscheidt can’t help but imagine one of his favorite protégées playing back on them back in the day. “Oh my, Sacha would have been great in those old Elizabeth teams. He would have been a great fit in the German-American League,” said Schellscheidt, a member of the National Soccer Hall of fame (inducted in 1990) and a champion in the North American Soccer League (NASL) as a player with the Philadelphia Atoms in 1973 before embarking on his coaching career. “A lot of pros today wouldn’t have been able to hack it out there back then – even guys who are on the National Team – but Sacha would have been perfect.” 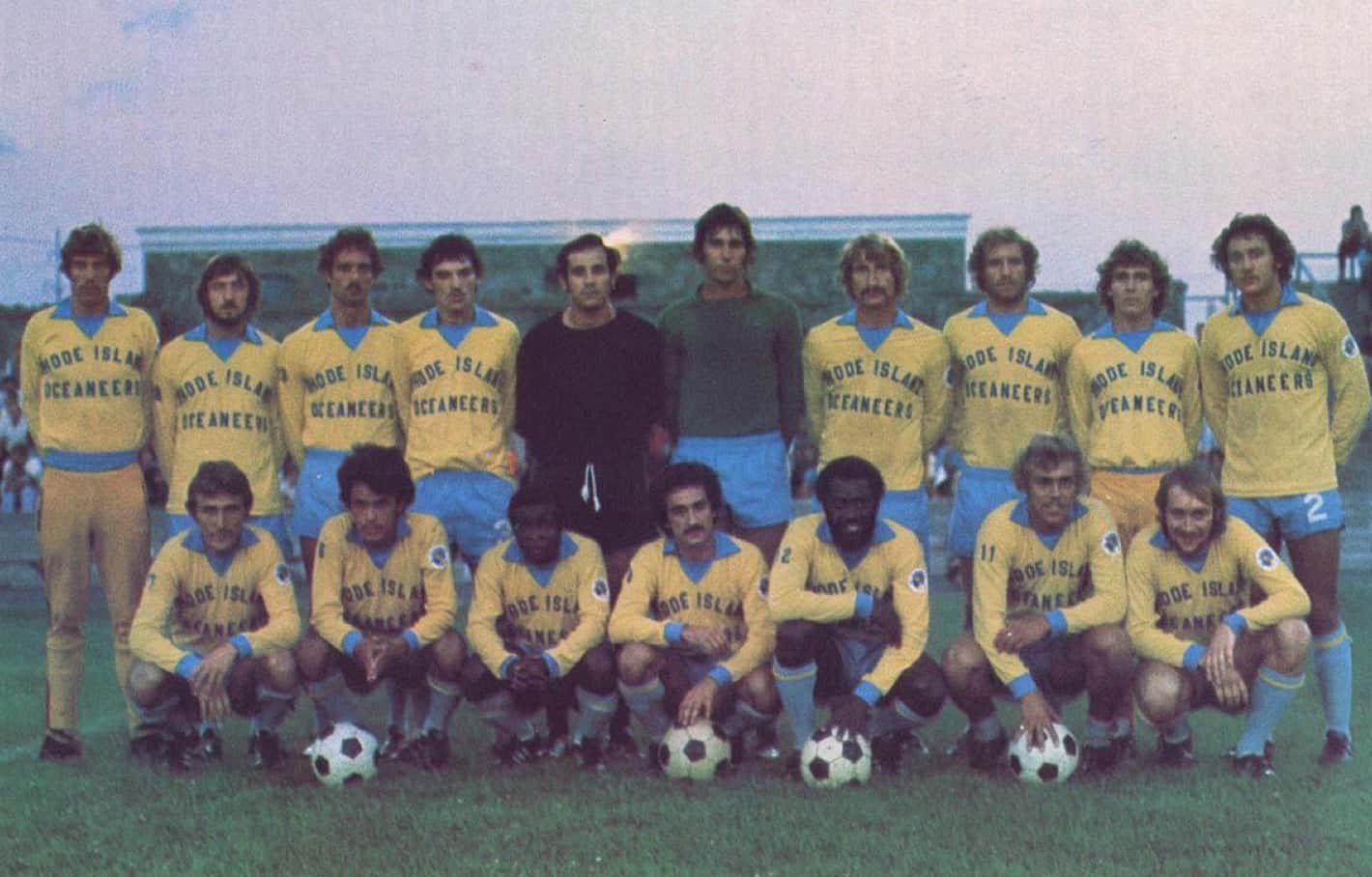 Schellscheidt (bottom left) as player-coach of the Rhode Island Oceaners
Schellscheidt speaks of Kljestan with a great pride, almost like a son. And the respect cuts both ways. The old coach follows his former player’s fortunes and the former player gives all due respect to his old boss. “I didn’t like it when the Red Bulls let him go,” said Schellscheidt. “I think they wanted to bring in a few more guys who would run around all day. To be honest, I was happy when Sacha came back up here [to NY] in his first game after joining Orlando and scored the winning goal. I was happy for him about that.”
The Open Cup has changed much since it began. Name something that doesn’t over 106 years. But the desire to lift that trophy is still strong today. “If I could see him lift the Cup – that Open Cup – it would be so much fun for me,” said Kljestan’s former mentor. “It would mean so, so much for me to see Sacha do what I once did.” Kljestan’s desire to stand in the footsteps of his old coach is no less fervent: “Even back when there were no pro teams, someone always won the Open Cup. It means something to every player in every team that ever won it. It means something in this country.”
Tags
Open Cup
2019 US Open Cup