In 1926, the year Mercedes-Benz formed in Germany, SC Hakoah Vienna took to the road to establish a second home in New York, where the club performed before enthusiastic crowds. The reception for the Austrian club was so welcoming, much of the team decided to emigrate over the course of 1926-28. Three years later, the team had built up its American incarnation and the NY-based outfit, which had come to be known as the Hakoah All-Stars, won the 1929 Lamar Hunt U.S. Open Cup (then the National Challenge Cup), setting an attendance mark that stood for 81 years.

The 21,583 spectators for Hakoa All-Stars’ 3-0 win over St. Louis Madison Kennels on April 7, 1929 might seem paltry compared to the possible record-breaking numbers for this year’s final at Mercedes-Benz Stadium in Atlanta. But that crowd still ranks fourth on the all-time U.S. Open Cup Finals list, and provides an indication of the tournament’s enduring popularity from its early years to the modern era.

Dexter Park – Just a Memory Now
There are, however, few reminders of that ’29 Final. Both teams faded away and the stadium, Dexter Park in Queens, on the Brooklyn border in New York City, has been replaced by a supermarket. 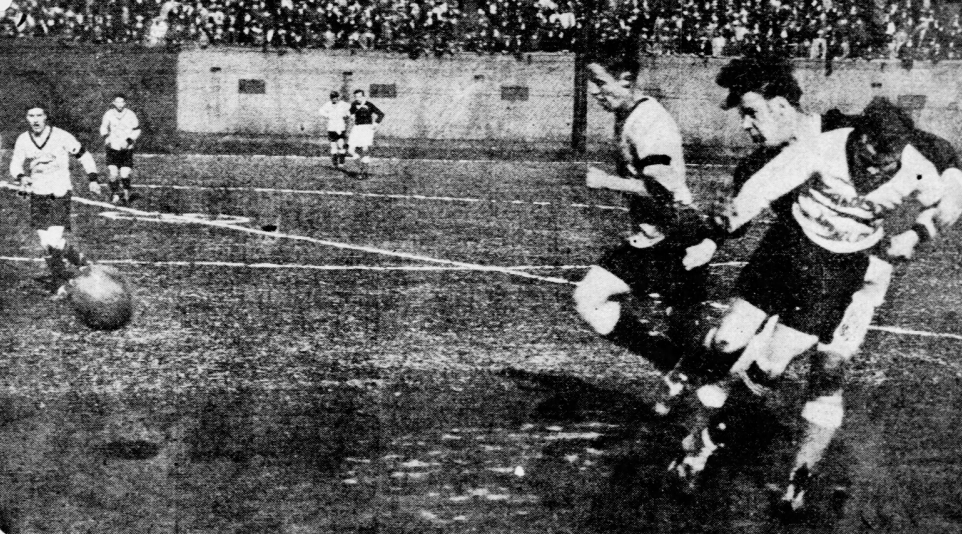 But the match marked a high point for the Open Cup, which had been steadily growing since its inception in 1914. The tournament – modeled on England’s FA Cup – was the showcase event for U.S. Soccer (then the U.S. Football Association), and interest had been building well ahead of the 16th edition.

U.S. Soccer planned to capitalize, expanding the one-game, neutral site Final to a best-of-three series. On March 1, 1929, USFA Executive Secretary Thomas W. Cahill announced, “The first of the grand finals being scheduled to be played at Dexter Park … March 31, and in the West a week later with a third game, if necessary, on a ground to be selected by the committee. The players of both semifinalists are undergoing special training to fit themselves for one of the greatest soccer battles on record.”

In the East semifinal, Hakoah All-Stars edged the New York Giants, 1-0, on a Josef Eisenhoffer goal before 12,000 at Dexter Park on March 24. Madison had defeated Sparta A & BA of Chicago, 7-4, in the West semifinal the previous week. And that set up a finale featuring a clash of styles, European versus American – Hakoah’s emphasis on skill and tactics against Madison’s reliance on blunt-force physicality.

“Hakoah depends upon its knowledge of the fine points of the game to win games. Playing against any St. Louis team, the Jewish lads will face a bunch of bashing-smashing-‘get that ball through the goal‘ set of players, altogether different from anything they have met before. Messrs Guttmann, Eisenhoffer, Gruenwald and company have been listed with the players who ‘cannot stand the gaff.’ If that be so, then they are in for a trimming in the Mound City next Sunday. The Madison boys will show them all the speed they want …” (The Boston Globe, 3/25/1929) 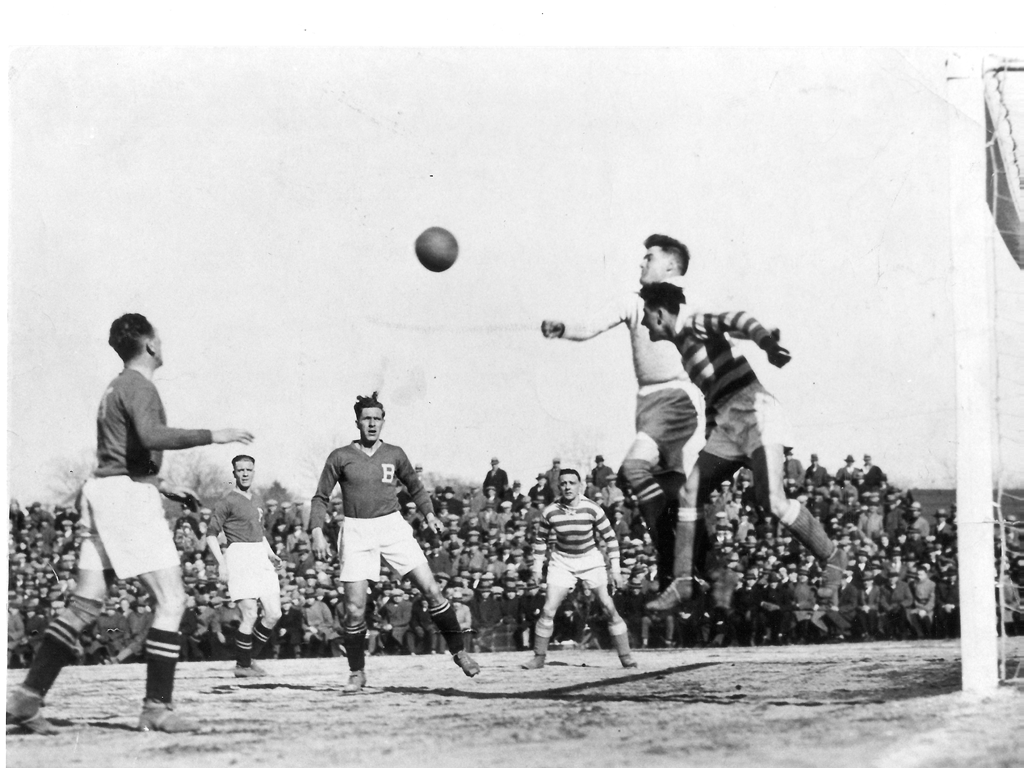 Fall River (stripes) against Bethlehem Steel in the 2930 Open Cup

But Cahill’s planning was disrupted, partly because American Soccer League teams failed to make stadiums available as they waged a so-called “Soccer War” with the USFA.

“Soccer War” Sparks Venue Chaos
The opening match ended up being played on March 31, but the venue had been changed to Sportsman’s Park in St. Louis. Nonetheless, a “record-breaking” crowd of 18,000 showed up to witness Hakoah All-Stars’ technicians defusing Madison Kennels’ hard-charging offense, while Josef Eisenhoffer and Siegfried Wortmann converted in a 2-0 victory for the New Yorkers.

Hakoah supporters had already been thrown a curve in the opener, and if they were making plans to attend the return leg, they had to be further confused. The day after the opening leg, the Boston Globe reported: “Dexter Park cannot be obtained for the game, and all the other big grounds are tied up with the American Leaguers.” Then, on April 4, three days before the match: “Dexter Park is the most likely place for the second game between Hakoah and Madison Kennels in the National Cup. No other ground seems to be available over in the big city.”

The Polo Grounds, located in upper Manhattan, about 15 miles from Dexter Park, had apparently been a Hakoah stronghold. But the Polo Grounds were home of the ASL New York Nationals, owned by Charles A. Stoneham (also the New York Giants baseball team owner). Stoneham led resistance to the USFA, and strongly objected to scheduling conflicts involving the Open Cup and ASL. Stoneham’s Nationals were reigning USOC title holders but were among the teams boycotting the competition.

On May 1, 1926, a friendly involving the touring Hakoah Vienna and a New York Select team had drawn a crowd of 46,000 to the Polo Grounds, a record for any soccer game in the U.S. that stood until 1977. Remarkably, the match outdrew the New York Yankees, who defeated the Washington Senators, 4-1, extending their winning streak to eight games, before a crowd of 42,000 at Yankee Stadium. 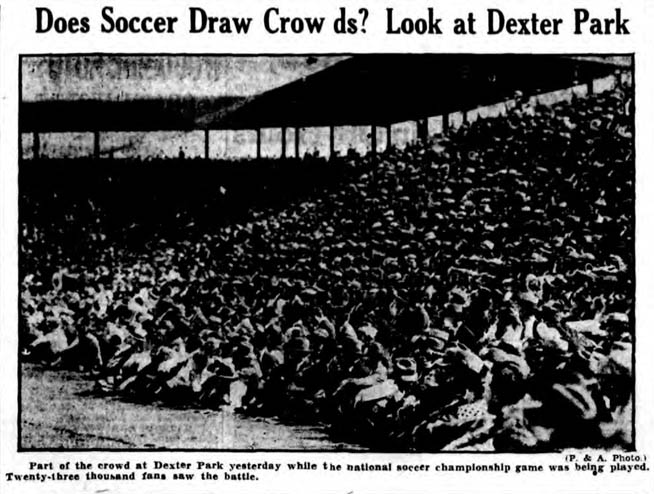 Grantland Rice’s 1926 “Sportlight” column about the friendly noted, “The time isn’t far away when the best soccer team in England, Scotland or France sent against the best soccer team in the United States would pack the Yale Bowl, the Berkeley Stadium, the Polo Grounds or any other coliseum of capacity that might be used. For soccer is one of the best of all games, replete with action and excitement, demanding stamina and skill.”

SC Hakoah Vienna had been the best team in Austria, winning the league in 1925, and remained competitive through most of the decade. During Hakoah Vienna’s second U.S. tour, on Sunday, May 1, 1927, the club played to a 2-2 draw with the New York Giants before 40,000 at the Polo Grounds. The same day, the Yankees-Philadelphia Athletics clash drew 70,000. (The 1927 U.S. Open Cup final was also contested on May 1, the Fall River Marksmen’s defeating Holley Carburetor before 11,000 in Detroit).

The wisdom of Hakoah Vienna returning had been questioned after having had so many players defect following the ’26 visit. But the tour apparently generated enough money to encourage organizers. Gate receipts for the opener in 1926, a 4-0 Hakoah victory over the New York Select team before 25,000 fans were “said to be $76,000.” Ticket prices ranged from $1 to $5. “A little out of the experience of our soccer fans,” according to the Globe.

Hakoah Fans Stand Strong
Certainly, the USFA was hoping to cash in on the palpable enthusiasm for the sport and the Hokoah All-Stars’ NY popularity in those early times. Additionally, Dexter Park had served the organization well in the past. The 1924 Eastern final between Bethlehem Steel and the Fall River Marksmen had pulled in 15,000 at Dexter Park, with the Globe reporting that several thousand traveling Marksmen fans spent “about $100,000” (equivalent of $1.4 million today).

But even on short notice, Hakoah All-Stars supporters were too numerous for Dexter Park’s capacity, listed at 15,400. Photographs show overflowing stands, estimates ranging as high as 25,000. But, despite setting an Open Cup record, an opportunity appears to have been missed, according to the Globe’s George M. Collins: 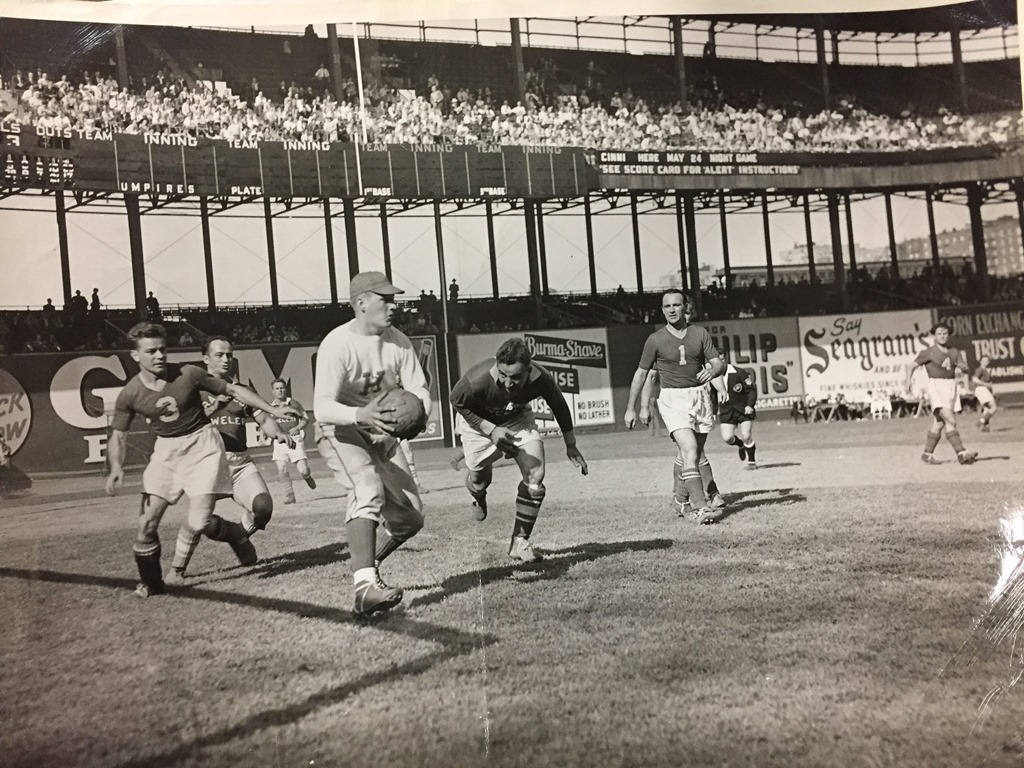 The 1944 Final at the Polo Grounds – after crowds had dwindled

“Undoubtedly, the present war cost the United States football men thousands of dollars … a barrel of dough was lost because one of the big parks couldn’t be obtained. Had the Polo Grounds or Ebbets Field been available for that Hakoah-Madison Kennels game the parent body would undoubtedly have had a record crowd. … Hakoah soccer men were much disappointed that their game was not played at the Polo Grounds. They lost thousands by going to Dexter Park, seemingly.”

Hakoah All-Stars easily wrapped up the series, taking a 3-0 victory on goals by Erno Schwarz, Max Gruenwald and Moritz Haeusler.

The USFA was able to engage the Polo Grounds for the 1930 Open Cup final, but Hakoah had been eliminated by the Brooklyn Wanderers in the second round. By the time a later incarnation of Hakoah All-Stars returned to the finals, in 1957, times had changed and the Polo Grounds were in such bad shape that Stoneham announced he was moving his baseball team to San Francisco.

Coats Field, originally called the Lonsdale Ave. Grounds, was home to J&P Coats FC, who competed in the ASL from 1921-29. The stadium was a mecca for the Open Cup, playing host to seven Finals from 1914-42, plus the 1949 U.S. Amateur Cup championship game. The inaugural Open Cup title match drew a crowd of 10,000 in 1914, and equaled that in 1916 at Coats Field. Two years later, Bethlehem Steel and the Fall River Rovers attracted 13,000 for the championship, an overflow throng that included some sitting with legs dangling off the roof of the grandstand at Coats Field. 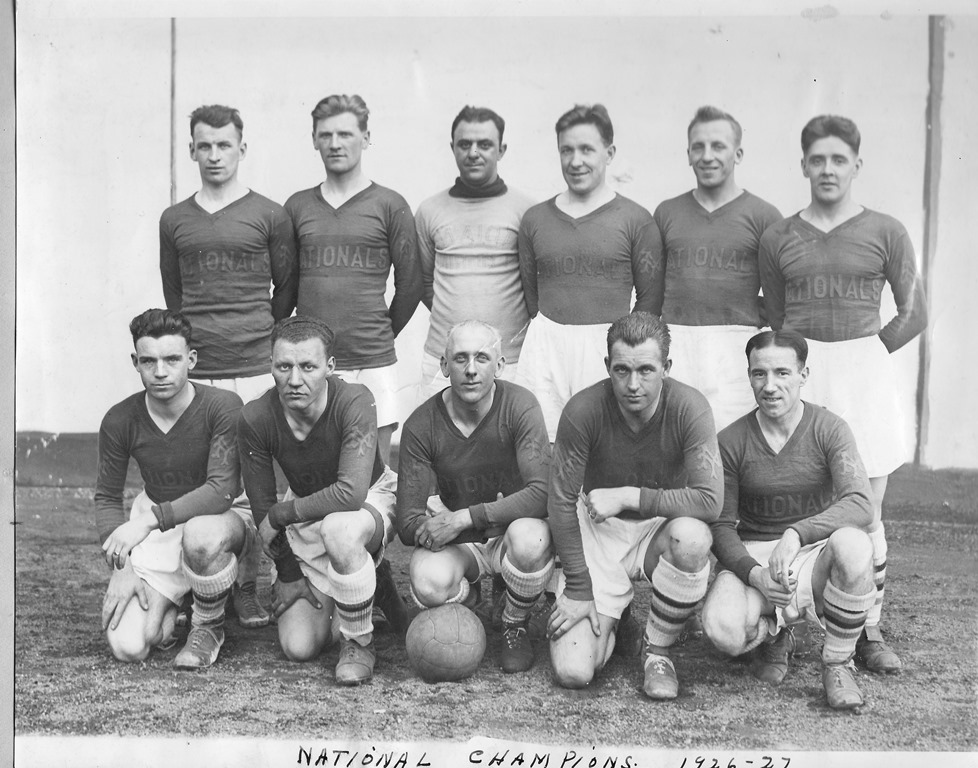 That attendance mark stood until 1923, when 15,000 arrived for the Paterson Silk Sox vs. Scullin Steel final at Harrison Field. The 1928 final upped the standard to 16,000, as the New York Nationals and Chicago Bricklayers played to a 1-1 draw at the Polo Grounds. That record mark stood for a year, until the Hakoah All-Stars appeared on the scene.

Atlanta has set MLS standards but has staged only one Open Cup date on its home field, in this year’s Round of 16, which was played before 41,012 last year. If records are made to be broken, it could be Atlanta and Mercedes-Benz Stadium’s turn once again in the 2019 Final.