Fans of the 106-year-old Lamar Hunt U.S. Open Cup live by its magic moments. And the Semifinal Round of the 2019 competition tossed up a good few of those on August 6 and 7. Join usopencup.com for a look back at eight moments of note from those two games in which the Uniteds (Atlanta and Minnesota) set a date with destiny, Ozzie Alonso joined the pantheon of Open Cup heroes and a pair of Walls were filled with equal parts agony and ecstasy.

No Martinez, No Matter

All the talk early Tuesday was about the state of Josef Martinez. Where was the 2018 MLS MVP? What was the injury that kept him from traveling to Orlando for the Open Cup Semifinal? Atlanta United fans asked: What will we do without out him? Orlando City fans considered the upside: Could this be our time? All such questions were answered by Atlanta United that night. They dug deep into their bag of tricks. Head coach Frank de Boer changed tactics and Justin Meram, a tormenter out left, Ezequiel Barco and new arrival Emerson Hyndman stepped up (Hyndman even grabbed a mis-hit winner in the 2-0 victory). “That’s just what this team’s about,” said goalkeeper Brad Guzan under a hot Florida rain after booking his club’s place in a first-ever Open Cup Final. “We’ve got guys waiting in the shadows just to get their chance out on the field. Anyone and everyone that stepped on the pitch tonight was brilliant.”

Florida has history in American soccer. It goes back a ways. From the Tampa Bay Rowdies and Fort Lauderdale Strikers of the old NASL in the 1970s to the failed attempts to build something lasting in MLS’s early days (both the Miami Fusion and Tampa Bay Mutiny folded after drawing breath for five years). There are new neon imaginings of a team soon to be born in Miami with the help of David Beckham and mountains of cash. But in the very real challenges of the here and now, Orlando City laid down a marker in the 2019 Open Cup. On the field, they gritted and gutted their way to a first-ever Semifinal. And in the stands, an army of purple stood and roared on their heroes – Nani and Sacha Kljestan and Adam Grinwis among them. The crowd of 18,461 was the third highest in the tournament’s century-plus history and a sign that soccer is here to stay in FLA. In a city that’s home to Walt Disney’s wonderlands and Universal Studios, a place that trades in the fantasies and mythology of make-believe, Orlando City’s Soccer Club is no illusion. It’s the real deal. And the Exploria Stadium is no soundstage.

Dreams of the North Country

Farther north, Minnesota was long considered a wasteland for soccer in America. Many wondered about the merits of bringing an MLS side to the North Country at all. Minnesota United’s first two seasons up from the second-tier showed little to contradict such suspicions. They failed to reach the MLS playoffs twice in succession and occupied the lower reaches of the Western Conference standings. But its 2019 now and up is down and black is white. In the blink of an eye, the Loons have gone from quirky, endearing backwater to quirky, endearing powerhouse. With 15 goals in four Open Cup games, a bona fide star in Darwin Quintero (top-scorer in the 2019 Cup with six goals from four games) and a rising star of tomorrow in the form of Mason Toye (scorer of a stunning winner against Portland in the Semis), Minnesota is now – and irrefutably – home to some of the country’s best football. And their brand new Allianz Field in Saint Paul is among the best soccer-specific stadiums in the country. MNUFC are currently second in MLS’s West, behind only the all-conquering LAFC. On August 27, the Loons will flock to Atlanta United for a first-ever Open Cup Final – a first-ever Final of any kind. They’ll be underdogs, but so what? They’ve been that all along.

This is sport. We’ll remember the result and abandon the details. That’s just how we’re programmed. But Diego Valeri of the Portland Timbers will be haunted by a lingering image. He was zoomed-in and up-close. Minnesota United were up 2-1 and hanging on. Time was ticking down. The Timbers – cursed with a run of tough games away in the Cup – hunted an equalizer. A dangerous cross came in from the right boot of Sebastian Blanco. Minnesota keeper Vito Mannone fumbled and the ball fell to the knee of Valeri – so long Portland’s hero and MLS champion in 2015 – on the doorstep. All the Argentine could do was push the ball toward the goal. He did. But it hit the post and, instead of bouncing right back out for him to tap home from one yard out, it curled off the inside of the post and evaded both Valeri and young star Jeremy Ebobisse – who’s arms had gone up in reflex celebration of a goal that – somehow – failed to be. Five Portland players stood with their hands on their heads in a picture of agony. Gio Savarese, on the bench, did the same. Never was there a clearer – and crueler – image of the end of a road. The final whistle sounded 60 seconds later. 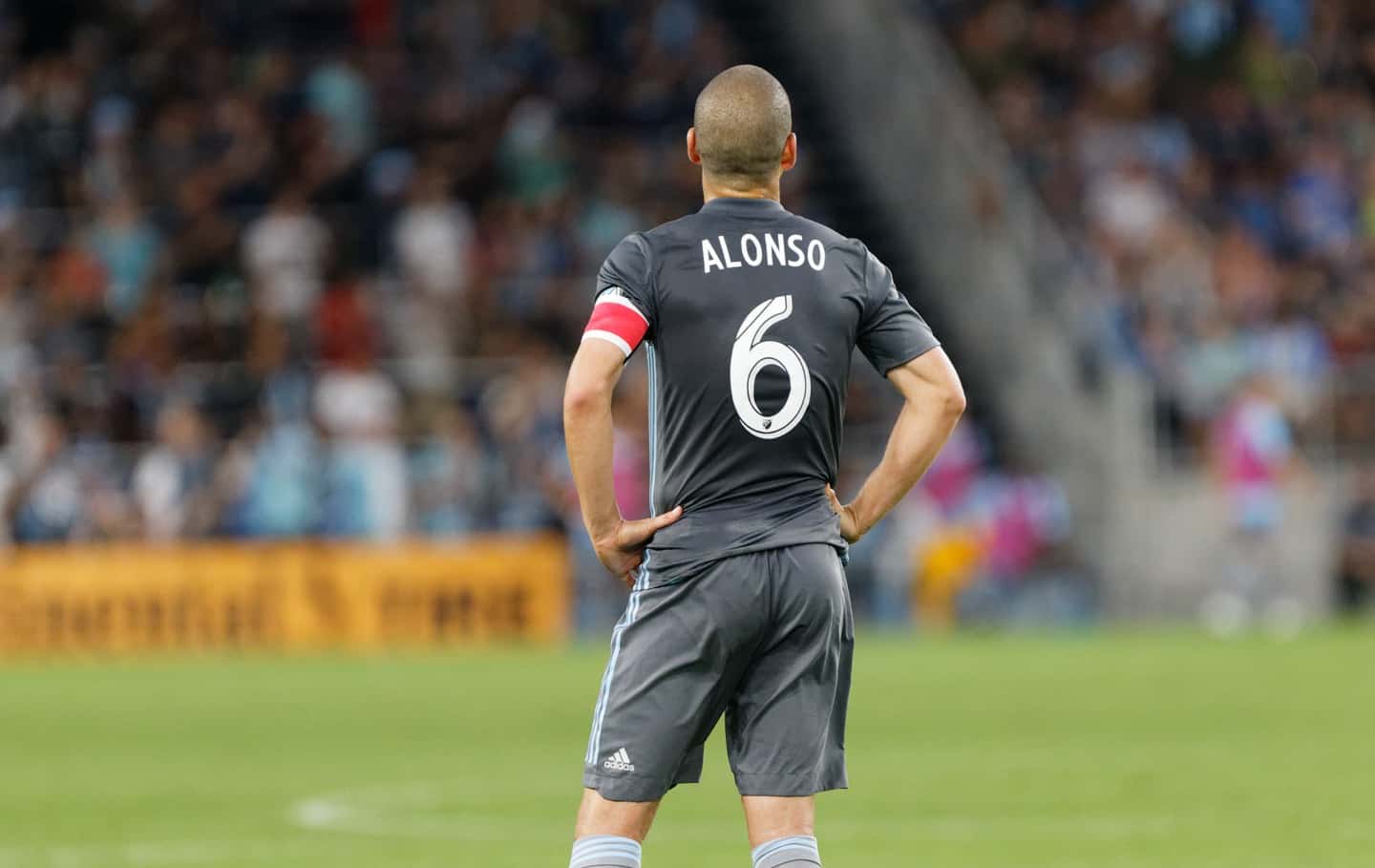 We think of Open Cup legends in black and white – stained sepia-toned photos of Billy Gonsalves found in trunks down in the cellars of Fall River, Mass. We think of the heroes of the old Bethlehem Steel and Morgan Strasser. Our minds turn to the Ukrainians in Philadelphia in the 1960s or the Maccabees of the early 1980s, their socks bunched around their ankles like tired animals. Sometimes it’s hard to see the heroes in your midst – among you in the right here and now. Ozzie Alonso is one. The Minnesota United holding midfielder who seems to be everywhere on the pitch – even at the ripe age of 33 – played in his seventh Open Cup Semifinal on Wednesday. And he’ll play in his sixth Final later this month. He was the heart and soul of a Seattle Sounders team that won the Cup four times in the decade he was there. “This club [MNUFC] has never been to a Semifinal before,” said the man who defected from his native Cuba to chase a soccer dream in America. “And I want to transmit my spirit and my memories of what it takes and what it means.”

It’s a partition, right? A barrier? Something in the way. We often hear appeals to tear down walls, to build bridges instead. But Orlando City’s Wall and Minnesota’s Wonderwall are bridges. Built as steep as building codes allow and set in behind one goal, they’re a home where capos – cheer leaders facing away from the game – urge noise and enthusiasm. They stir the soup until it boils. The fans stand on those Walls – all as one and lost in the same goal. Flags fly and songs are sung. Those Walls make the home goalkeeper grow a little bigger when he’s at their end. And the visiting one shrinks just that little bit. No one on those Walls is sitting on the fence. And sure, they’re noisy and beer-soaked. They’re rough sometimes and the chatter isn’t always fit for Sunday School, but these Walls are more than just a smattering of seats each one exchanged for a certain number of dollars. They’re wide-open spaces – filled only with potential – and oh how we saw them come to life in the Semifinals. They were filled with the agony in Central Florida. In Saint Paul, the ecstasy. 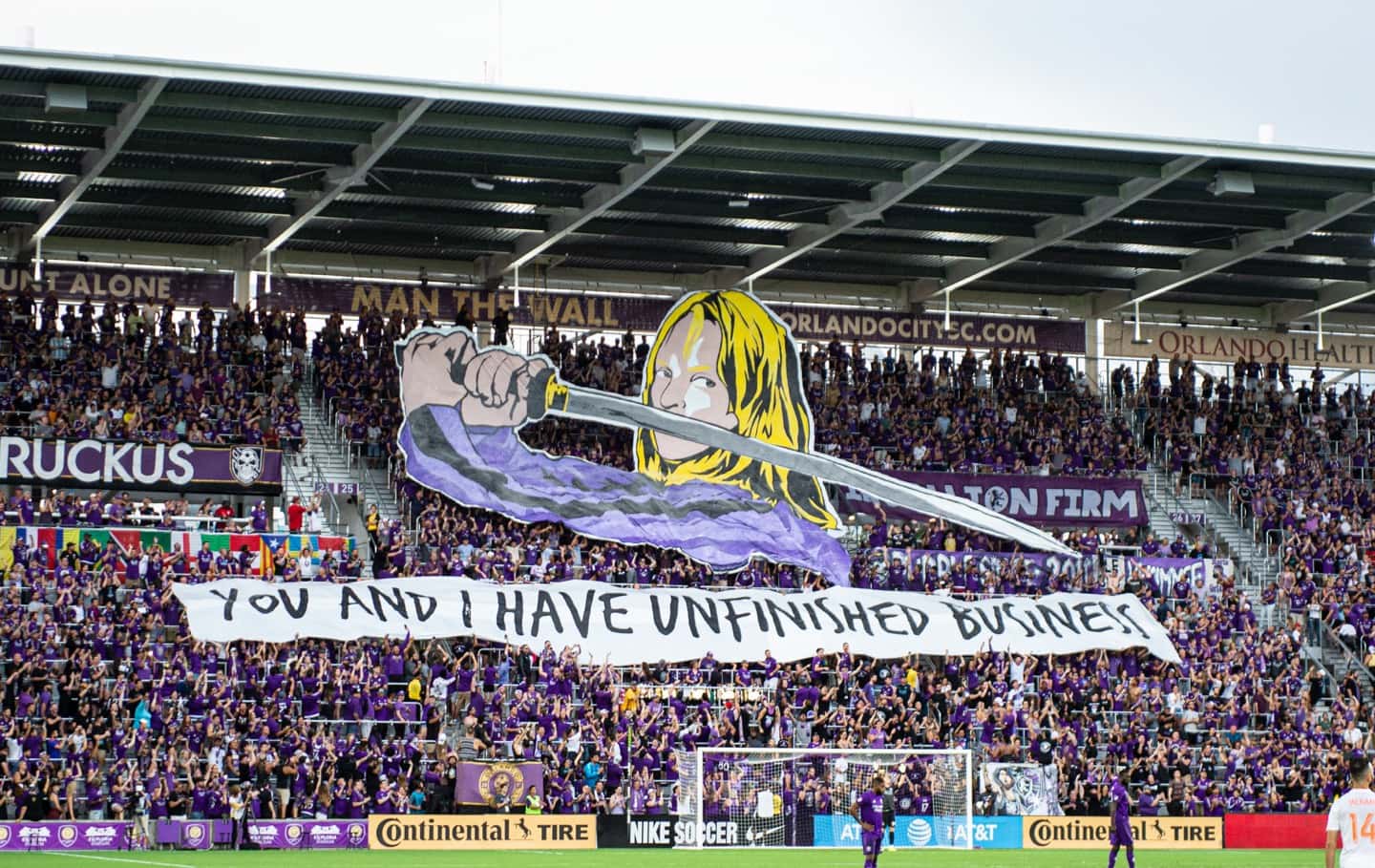 Losing a Semifinal is no easy thing to swallow. You’re too close to not taste the tang of silverware, but too far for your achievements not to be forgotten. That’s the game. That’s the Cup. Orlando City can hold their heads high for, on a different night with a little different wind, they could have knocked Atlanta off their perch. But their Last-Four run may act as a beacon and a spur to bigger things down the road. Sacha Kljestan, 33-year-old captain and grand schemer, came up short once more (he was a losing Finalist with New York Red Bull in 2017) and we all hope he has a few more tilts left at the windmill. And you Portland Timbers, you have nothing to prove to anyone. You were on the road for much of this 2019 Cup run – and that’s never easy. We raise our glasses to Gio Savarese, that coiled ball of energy and competitive juices, and the grit and skill we saw from young Ebobisse, Brian Fernandez and Diego Chara.

That joyous moment an Open Cup goal is scored😆⚽️ @MNUFC’s Darwin Quintero cool as you like. #USOC2019 pic.twitter.com/J6DSBYNFEx

We’ll have an Open Cup first on August 27. Either hosts Atlanta United or travellers Minnesota United will hoist the oldest trophy in American soccer for the first time. It’s also likely that it will be done in front of a record-breaking crowd. Atlanta is in love with its soccer spectacles and the chance to hold both major American soccer trophies at the same time will prove irresistible to fans who’ve become accustomed to successes and the huge parties that accompany them. Should it come to pass, it will be a damn long way from the old days. The first Open Cup Final drew approximately 10,000 fans and through the 1920s and 30s, good size crowds turned up to watch their heroes win or lose a national title. No one was really watching when the Saint Petersburg Kickers won in the 1980s when soccer was considered dead and buried and gone for good in this country. Today’s no better than yesterday – it’s just the latest point on a timeline – a continuum of Cup soccer – stretching back 106 years and telling a story worth hearing. But what a thing it would be to see 70,000 fans out to enjoy an Open Cup Final!