The Young Male Player of the Year field showcases a number of rising stars who have played for the U.S. Men’s National Team and the Youth National Teams this year. Defender Sergiño Dest shined for the USA at the 2019 FIFA U-20 World Cup in Poland and parlayed a sterling early season with Ajax into repeated senior MNT call-ups that will continue to come after he became cap-tied to the U.S. in November’s Concacaf Champions League match vs. Canada. Midfielder Paxton Pomykal saw his star rise as he helped lead the charge for the U.S. in Poland and turned consistent MLS performances into his first senior Men’s National Team appearance. Center back Chris Richards made a big move to Bayern Munich and showcased why Germany’s biggest club signed him as he earned a spot on the U-20 World Cup’s 10 players to watch list. Gianluca Busio had a breakout year for club and country as the most experienced professional player to ever suit up for a U-17 USMNT that qualified for a record 17th U-17 World Cup, while teammate Gio Reyna was the U-17s’ top scorer and secured a move to German powerhouse club Borussia Dortmund. Ricardo Pepi also contributed to the U-17 USMNT’s success while making his mark in the pro ranks with USL League One outfit North Texas SC, as his goals helped fire the side to the league title game. 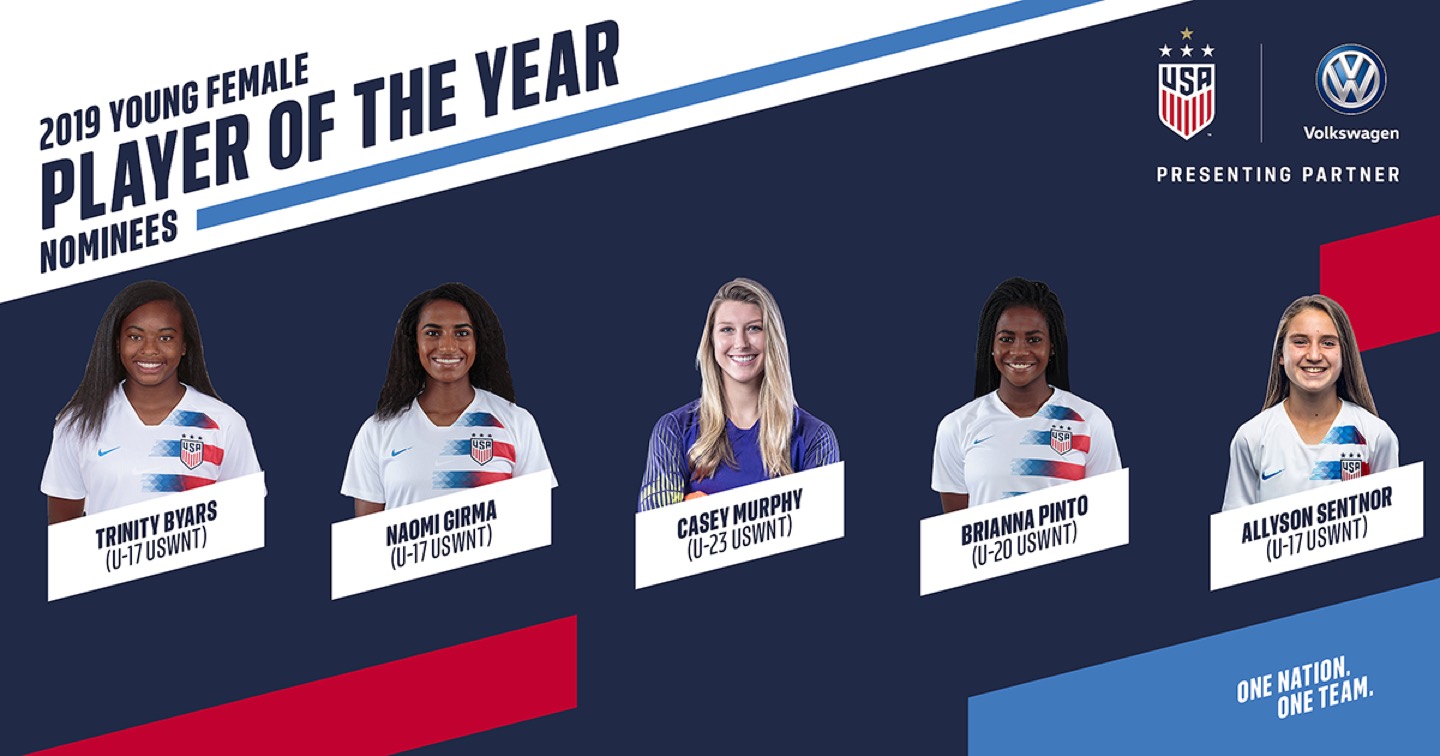 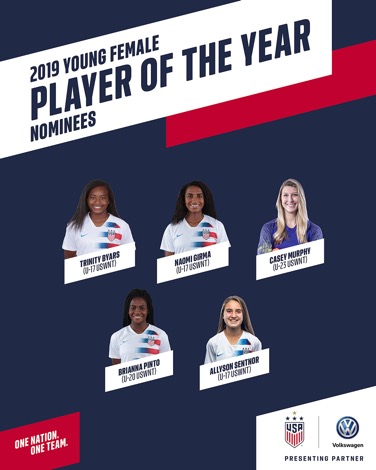 The Young Female Player of the Year nominees represent a group of talented players who have all seen time with U.S. Youth Women’s National Teams this year. Goalkeeper Casey Murphy returned from beginning her pro career in Europe to mind the nets for Reign FC, helping the side to a fourth-place NWSL finish and semifinal playoff appearance – a body of work that earned her a call-up to the WNT’s December ID camp. U-17 WNT forward Trinity Byars ran rampant through the U.S. Soccer Development Academy, scoring 31 goals in 18 games to help Solar Soccer Club win the U-16/17 National Championship while also shining at the international level. Defender Naomi Girma entered her second cycle with the U-20 WNT and led Stanford as a sophomore captain, while U-20 teammate Brianna Pinto has helped UNC to a 22-1-1 record; both have earned a call-up to the WNT’s December Identification camp. Rounding out the field is forward Allyson Sentnor. The Massachusetts native was recently named Sports Illustrated Kids SportsKid of the Year and is the U-17 WNT’s leading scorer this year, despite playing up an age group.

This year’s Player of the Year with a Disability field features Steve Everett, a player, coach and organizer for Power Soccer, who is working hard to expand access and investment in the sport. Holly Hunter of the U.S. Deaf Women’s National Team is a strong defender for U.S. Soccer Development Academy club Legends FC who has been called into a pair of U.S. Youth National Team camps, while U.S. Para 7-a-Side striker Nick Mayhugh is on the ballot again for his second straight year of superlative play for the USPNT, which achieved two historic tournament finishes this year thanks to Mayhugh’s goals and leadership. Michael Schmid completes the list of nominees after a superb year for the U.S. Deaf Men’s National Team, winning the Golden Boot while helping the USA win a gold medal at the 2019 Pan-American Games in Chile.

Players cannot win the Young Male or Young Female Player of the Year award more than once.