USMNT Advances To Concacaf Nations League Final Round With 4-0 Victory Vs. Cuba

Jordan Morris Continues Hot Streak with Pair of Goals, and Josh Sargent Scores First Brace for MNT; USA Advances Along Side Costa Rica, Honduras and Mexico to CNL Final Round Scheduled for June 2020
November 19 2019
On the Pitch

GEORGE TOWN, Cayman Islands (Nov. 19, 2019) – The U.S. Men’s National Team finished atop Group A of Concacaf Nations League A and advanced to the Final Round after defeating Cuba 4-0 at Truman Bodden Sports Complex.

Jordan Morris continued his scorching form with two more goals, while Josh Sargent added his first multi-goal game for the USA with a pair of tallies as the USMNT finished its 2019 campaign with consecutive victories and an overall 11-5-2 record.

Combined with last week’s 4-1 win against Canada, the result against Cuba earned the USA first place in the CNL Group A standings, besting its northern neighbor on goal difference as both nations finished with nine points. Finishing atop its group qualified the U.S. for the CNL Final Round, which is scheduled to be played in the June FIFA window. The U.S. will face Honduras in the CNL semifinals, while Mexico and Costa Rica will meet on the other side of the bracket.

READ: Five Things to Know on the Nations League 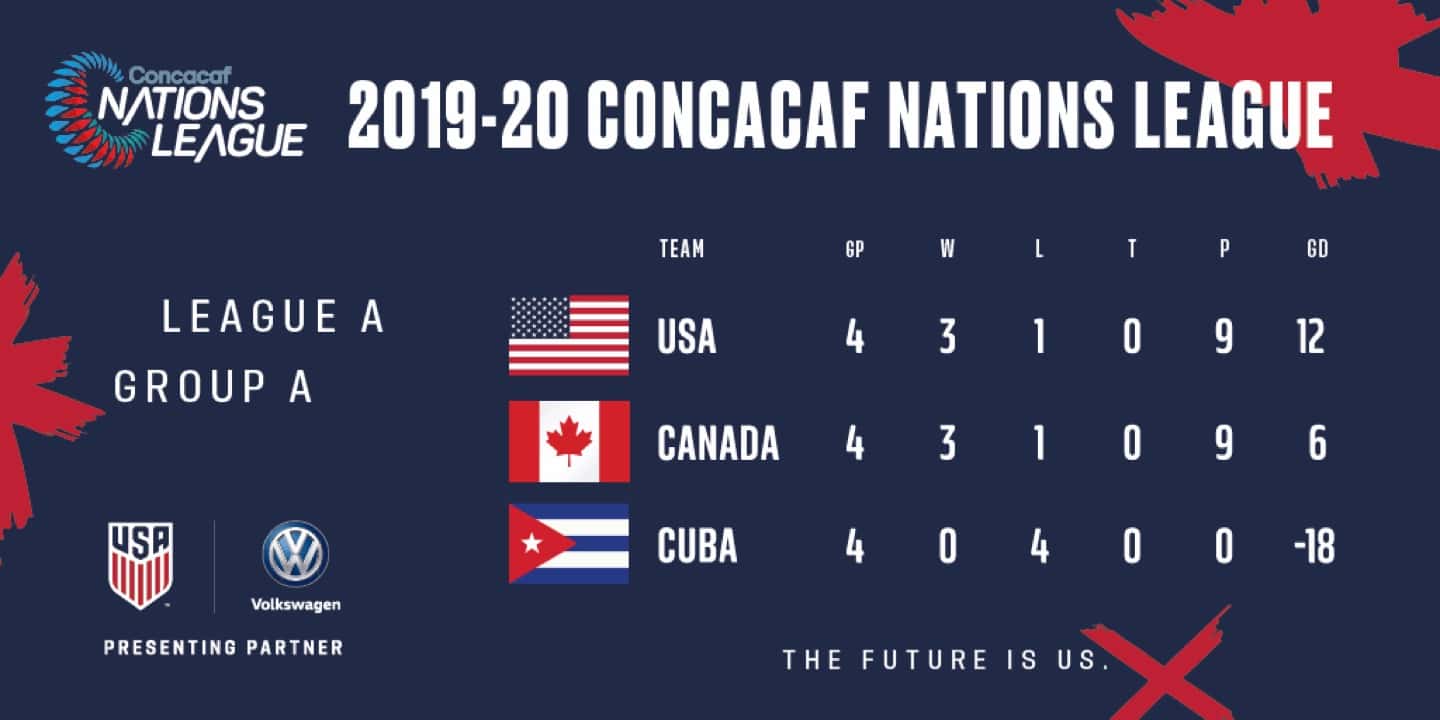 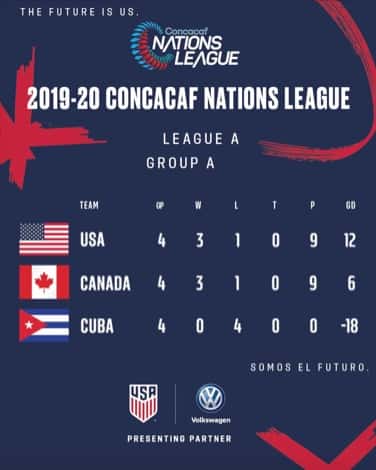 Similar to its last match against Cuba, the USA needed little more than 30 seconds to open the scoring. In the teams’ October matchup, Weston McKennie scored 31 seconds into the game, while tonight Sargent put the ball in the back of the net just 34 seconds after kickoff.

The USA continued to dominate possession and tempo and nearly added to its lead multiple times in the opening 10 minutes before settling into a more methodical approach that paid off with Jordan Morris doubling the lead in the 26th minute.

Tempers flared just after the half hour mark when Dariel Morejón put a hard tackle late on Daniel Lovitz, who went face-to-face with his aggressor, who received a caution for the infraction, after picking himself up off the deck.

The U.S. kept its rhythm despite some physical play and an increasingly choppy surface, eventually taking a 3-0 lead into the break after Morris added his second in the 39th minute. His second strike gave him his second multi-goal game of his MNT career and four goals in CNL play, the most of any player in League A.

The recently crowned MLS Cup champion was substituted at halftime for Tyler Boyd as U.S. head coach Gregg Berhalter went to his bench for fresh legs in the second half. At the hour mark, he brought on Reggie Cannon for right back DeAndre Yedlin and the two substitutes combined to serve up the USA’s fourth and final goal that was smashed home by Sargent in the 66th minute.

With the match well in hand, the U.S. wasn’t content to sit back and nearly added another goal on multiple occasions with substitute Alfredo Morales coming closest. In the end, the 4-0 score line underlined a solid away win that sent the USA to the top of the Group A standings, into the Final Round of CNL play and into 2020 on a winning high.

Next on the Schedule: The USA will announce its initial 2020 schedule in the coming weeks.
Social:Twitter, Instagram (@USMNT) and Facebook.

USA – Josh Sargent (Paul Arriola), 1st minute: The U.S. sent the opening kickoff backward before sending its first attack up the right side of the field. After winning a throw-in, DeAndre Yedlin tossed the ball to Arriola, who’d made with a crafty run behind the Cuba defense. He crossed the ball low toward the near, right post where Sargent toe-poked it past Sandy Sánchez in the Cuba goal just 34 seconds into the game.  USA 1, CUB 0 [WATCH]

USA – Jordan Morris (Weston McKennie), 26th minute: The USA recycled the ball after initially trying to attack down the left sideline and instead worked up the right via Cristian Roldan and Jackson Yueill, who ultimately hit a cross-field ball toward the top of the box that McKennie headed on into the path of Morris. The winger’s fantastic first touch took him in alone on goal and he patiently drew out Sánchez from the Cuba goal before slotting a low shot into the right side of the net.  USA 2, CUB 0 [WATCH]

USA – Jordan Morris (Aaron Long), 39th minute: Paul Arriola skied a corner kick from the right flag to the far side of the six-yard box where Aaron Long headed it on goal. The attempt was blocked but only to the feet of McKennie, who played it back to Long for a one-time cross that was again blocked. This time, the ball came back toward Long and he was able to pick it off a defender before sending in a cross that glanced off the same defender, arched over the keeper and was destined for the right side of the goal. However, Morris made sure the ball crossed the line with an easy volley into the open net. USA 3, CUB 0 [WATCH]

USA – Josh Sargent (Tyler Boyd), 66th minute: A long spell of possession by the USA finally saw the Stars and Stripes move the ball up the right sideline to Reggie Cannon, who lofted a cross to far left post where Boyd kept it in play with a nifty backheel. Laying in wait was Sargent and he smashed a left-footed shot between Cuba goalkeeper Sandy Sánchez and the left post. USA 4, CUB 0 [WATCH] FINAL

USA – Brad Guzan, 19th minute: Cuba won a throw-in deep in U.S. territory and the ball popped out 25 yards away from goal where a Cuba player’s drive deflected off McKennie just inside the box. While tracking the trajectory of the initial shot, Guzan was able to change direction and get down quickly to smother the deflection as it headed toward the right side of goal.

CUB – Maykel Reyes, 20th minute: From a USA corner, McKennie cracked an initial shot on goal that was blocked by a defender among a scrum of players in front of the goal. The ball deflected to the right side of the box where Long smashed it through the crowd but not past Maykel Reyes, who was in the right place on the goal line to block the ball whereupon the rebound was cleared away.

CUB – Sandy Sánchez, 38th minute: A foul on Lovitz led to him sending an in swinging cross from the resulting free kick that Cristian Roldan headed on goal from right side of the six yard box but Sánchez was on hand to deflect the ball over top the bar for a corner.

CUB – Sandy Sánchez, 70th minute: A cross from the right was headed on by a leaping Sargent and fell to Morales at the back, left post. A one-time rip by Morales was hit toward to roof of the net, but Sánchez was able to track the ball and get across in time to deflect the shot over the bar