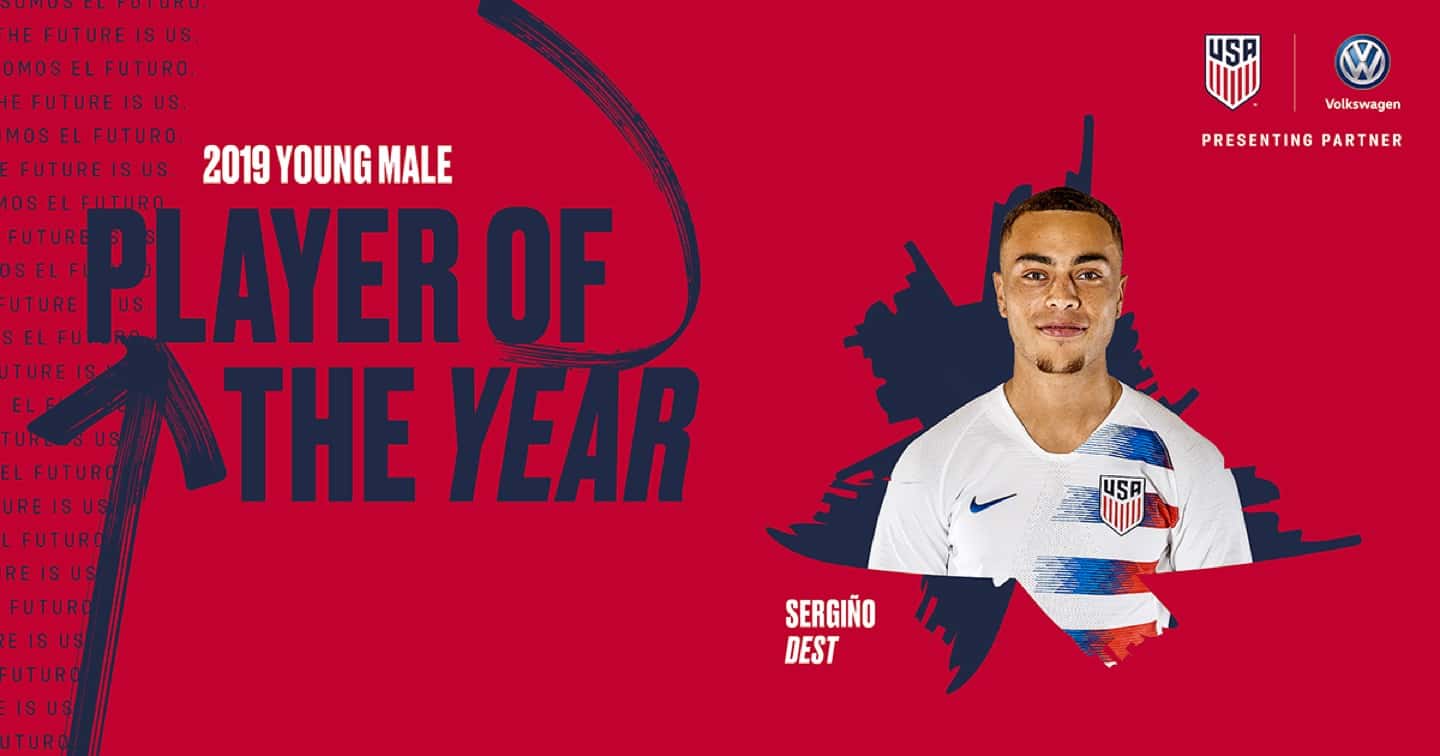 Dest enjoyed a breakout year for club and country in 2019, starring for the USA during its quarterfinal run at the 2019 FIFA U-20 World Cup in Poland, installing himself as a regular for European powerhouse Ajax and earning his first three senior Men’s National Team caps. The crafty and creative outside back started four of five games for the USA in Poland, including the team’s thrilling 3-2 Round of 16 victory against France, when Dest sparked the game-winning goal with a shot from distance.

Returning to Ajax, the defender started to see regular first-team minutes during the preseason and qualifying for the UEFA Champions League. After making his Ajax debut in July, Dest has appeared in 13 of 16 Eerdivisie games and eight of 10 Champions League matches for the Dutch giants.

His play in the Netherlands earned him his first MNT call-up in September, when he picked up his first cap vs. Mexico. Also eligible to play for the Netherlands, Dest tied his international future to the U.S. in November, helping the MNT earn a berth in the Concacaf Nations League Semifinals during a crucial 4-1 win over Canada, assisting on the game’s opening goal.

“It’s an amazing award to win and I’m very proud of this moment,” Dest said. I want to thank U.S. Soccer for the nomination, I also want to thank my family, my mom, my dad and everybody who has helped me along the way. Without them, I would not be at the level I am right now. This is a great experience for me, and I look forward to winning more team trophies with the U.S. in the future. This is a really pleasant moment and it makes me feel valued.” 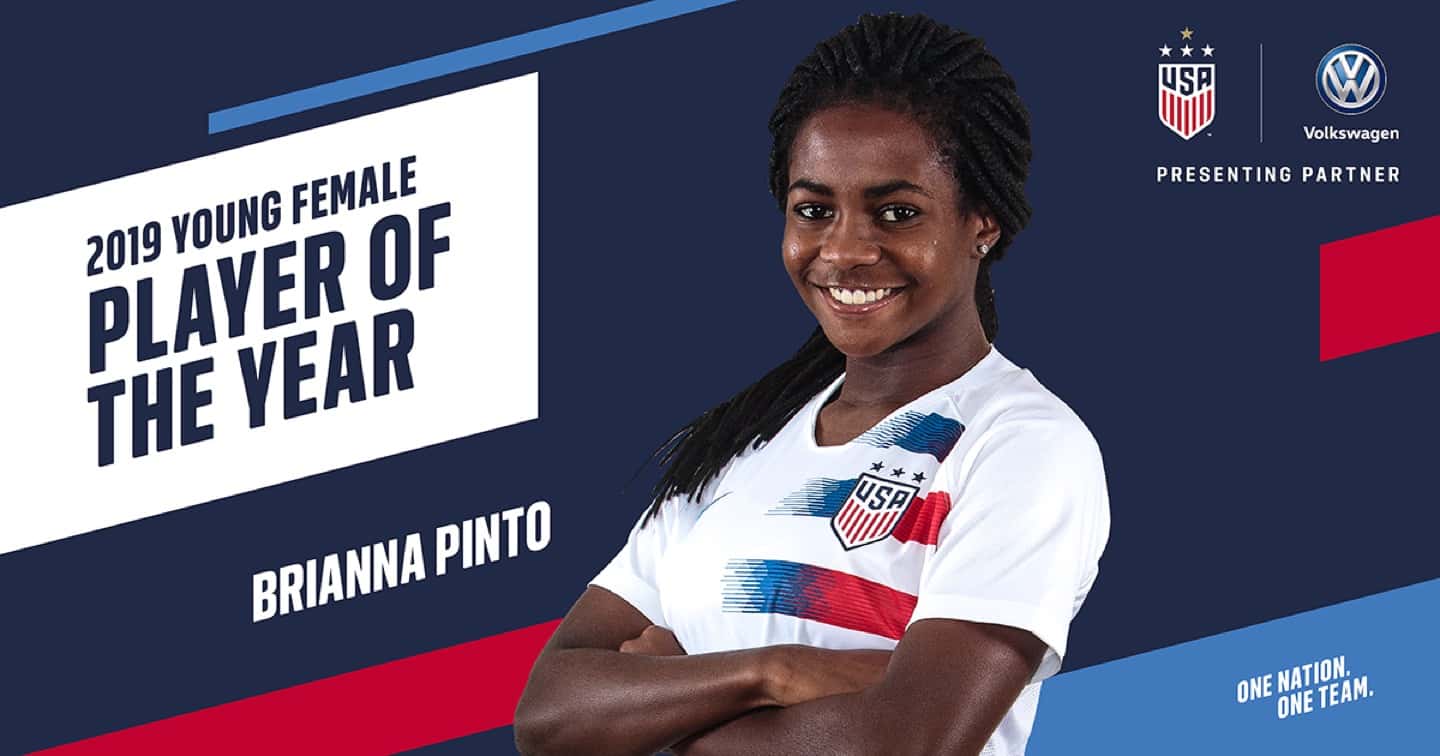 Pinto, a key player on the U.S. Under-20 Women’s National Team, entered her second U-20 cycle this year, while also leading the University of North Carolina to the NCAA Women’s College Cup Final. A veteran of the 2016 U-17 Women’s World Cup and 2018 U-20 Women’s World Cup, the skillful and physical midfielder appeared in seven matches for the U-20s this year, scoring against Germany and captaining the squad twice. She earned her second call-up to the senior WNT and first since 2017 when she was named to the roster for this December’s Identification Camp in Florida.

At UNC, Pinto helped the Tar Heels to a 22-1-1 record while earning All-American and All-ACC honors. She started all 27 games she played for Carolina on the year, scoring 11 goals and adding six assists to finish second on the team in scoring.

“I feel extremely grateful to have been a part of U.S. Soccer since I was 12-years-old when I went to U-14 ID camp,” said Pinto. “The Federation has given me so many opportunities to travel the world, learn the game and build incredible relationships along the way. This experience has not only shaped me as a soccer player but allowed me to experience different cultures around the world and has given me a great appreciation for the opportunities that American female soccer players are given. To be selected as the Young Player of the Year is humbling and a huge honor, especially looking at all the great players that have earned this award before. I know I still have a long way to go as a player, but I’m super excited for any opportunities that are ahead and I’m incredibly thankful for all of my teammates and coaches, and my entire family, who have been with me on this journey.” 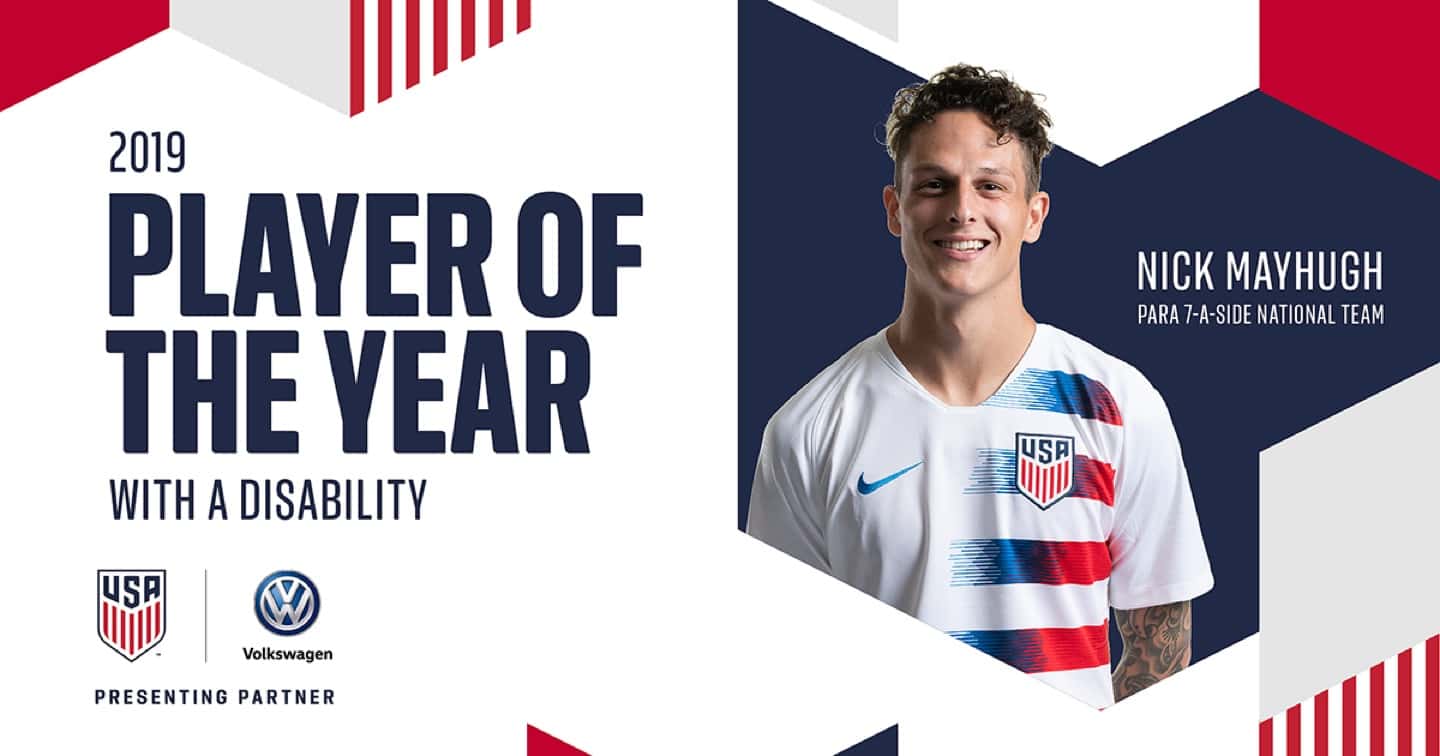 Mayhugh served as a key figure for the U.S. Para 7-a-Side National Team during a year that saw the squad reach new heights at two major international competitions. Leading the charge on offense for the No. 4 PNT, its highest-ever world ranking, the midfielder netted 19 goals in 11 games at the IFPCF World Cup and the 2019 Para Pan American Games. At the World Cup in Spain, Mayhugh scored a thrilling last-minute winner to down perennial powerhouse Iran, seeing the USA become the first nation to beat Iran outside the top two ranked teams in the world and win its group on the world stage for the first time in program history. In Lima at the Para Pan American Games, Mayhugh helped the USA win its first-ever podium finish at the tournament, securing its place in the medal round with a come-from-behind victory over Brazil.

“It’s an incredible honor to receive this award and a privilege to wear the crest and represent the USA,” Mayhugh said. “Thank you to Coach Sharp, the coaching staff, the medical staff and everybody on the technical side who contributed to the team’s success throughout the year. Thank you to my family and all the fans of the USPNT for your continued support- I promise you, all the cheers in the stands and messages of encouragement online mean more to me and my teammates than you could ever imagine. Thank you to every single one of my teammates, you all push me to be my best and this is as much your award as it is mine. Lastly, congrats to all the nominees, at the end of the day we are one big family and I’m blessed to be amongst some of the best athletes in the world.”

Votes for Player of the Year awards are collected from National Team coaches, National Team players who earned a cap in 2019, U.S. professional league head coaches, select media members as well as former players and administrators. Players cannot win the Young Male or Young Female award more than once.