For decades, U.S. Soccer has worked to get American girls and women playing and watching soccer. Along the way, more than any other Federation in the world, U.S. Soccer supported women competing and winning at the highest levels. With millions of girls and women now playing the game, and after winning numerous Concacaf titles and Olympic medals, plus four Women’s World Cup championships, U.S. Soccer is continuing to tackle the challenge of getting more women into coaching.

One obvious place to turn for capable coaches is retired USWNT players, many of whom currently coach at the youth level. For many years, former USWNT head coaches Jill Ellis and April Heinrichs — who was also the director of the USA’s Youth Women’s and Girls’ National Teams from 2011-2018 – encouraged and promoted women in coaching in the National Team programs. They understood the special impact these former players can have on young women in both their play and confidence. Ellis and Heinrichs insisted that former players work with U.S. Youth National Teams and with new U.S. Women’s National Team General Manager Kate Markgraf coming on board, she plans to keep that going and hopefully expand the opportunities for women in coaching.

“Retired USWNT players are serial winners who can model how our young players can thrive on the pathway to the top,” said Markgraf, a former Olympic and World Cup champion herself. “With instant credibility and insight into all the challenges a player needs to overcome to reach their goals, retired players can assist, implement, and support our teams’ head coach’s efforts to develop future players for our Senior team.

“More and more women are looking at coaching as a legitimate professional path, and we want to provide them with opportunities to learn, grow and coach the nation’s top players,” she continued. “While our young players gain valuable lessons from them, they can also gain important experience working with our National Teams that will help them on their career paths.”

Dozens of former USWNT and professional players have assisted in youth training camps over the years while several have also been head coaches. Michelle French, Mia Hamm, Shannon MacMillan, Shannon Boxx, Amy Griffin, Jill Loyden Stephanie Cox, Amy LePeilbet, Tiffany Roberts Sahadak, Tina Ellertson, Kacey White, Shannon Higgins-Cirovski and Siri Mullinix, are all among the former WNT players who have donned the USWNT training gear once again to coach and inspire some of the top young players in the country. Retired players who attend camps run training sessions and talk tactics in team meetings, but some of the most meaningful lessons come from sharing the experiences of representing their country on the field. 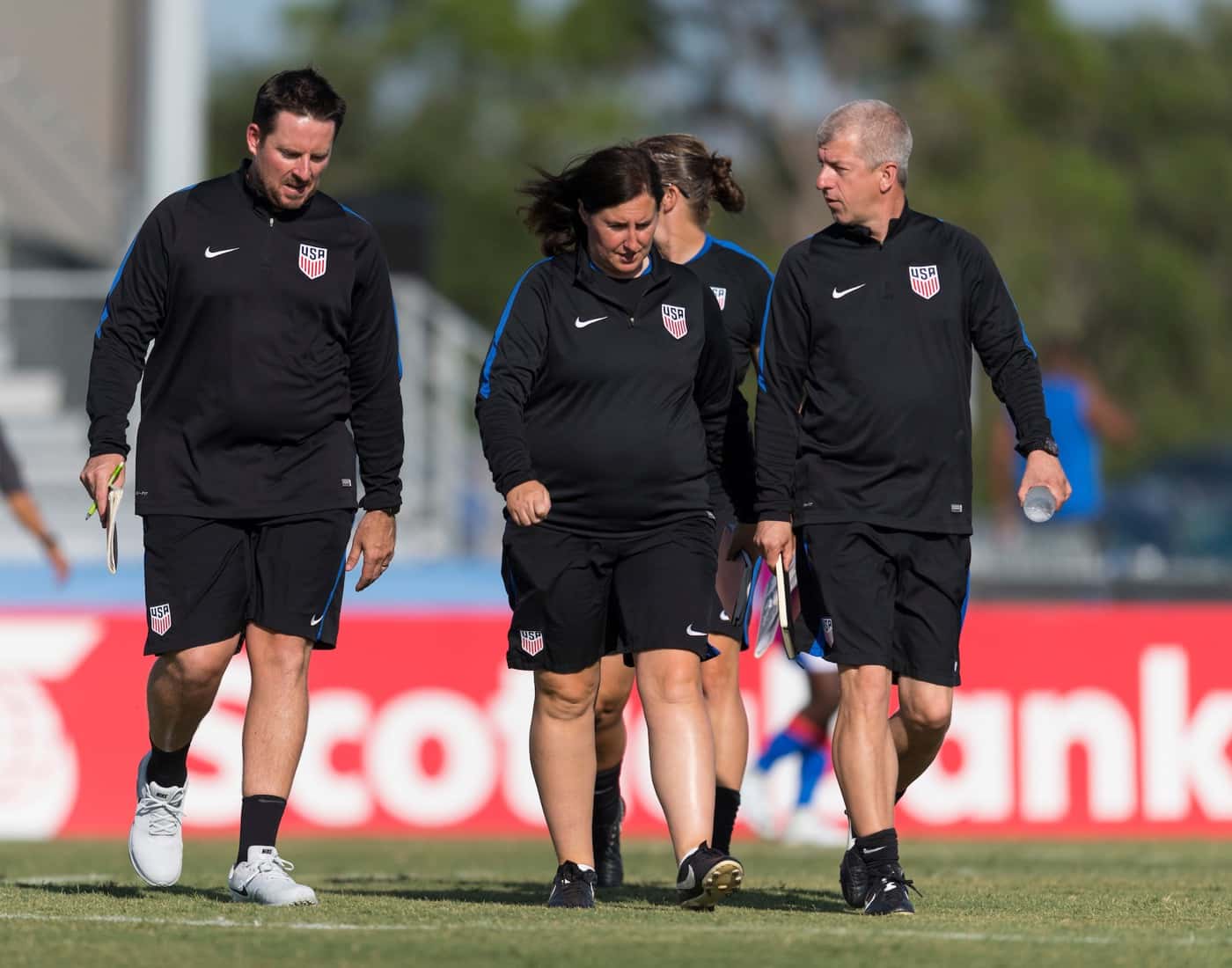 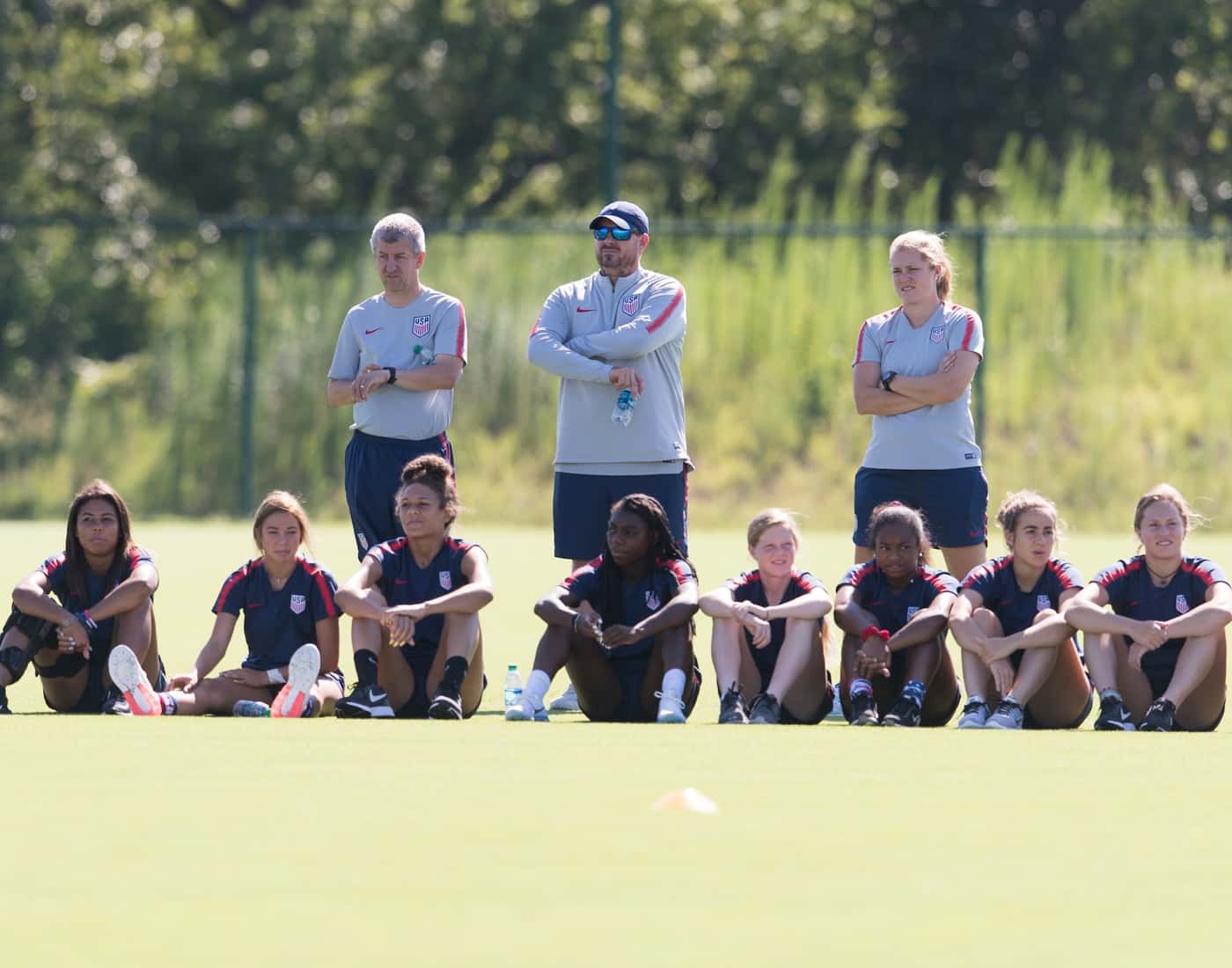 “Being on the National Team for almost 10 years was not easy,” said Cox, who won an Olympic gold medal in 2008 and was a starter at the 2007 Women’s World Cup. “I played every role imaginable, from captain on youth teams, to a starter in the World Cup. I got cut twice from Olympic teams. And over the course of my National Team career I realized how much mentality has to do with your performance on the field. Now as a coach, I am so glad that I can use my varied experiences as a player to help my own players overcome the adversity that they face to be the best player and teammate that they can be. I focus on them controlling the things that are in their control, such as their attitude, their response to mistakes that they make, and their work rate. I try to create a positive environment where they can enjoy the game.”

U-20 USWNT head coach Mark Carr believes this shared experience is invaluable to his players — and only something previous National Team players can offer.

“I haven’t had the experiences that those players have,’ said Carr. “They’ve gone through a Youth National Team. They’ve maybe been cut off rosters, then they’ve come back. They’ve played in youth World Cups and senior World Cups. As a coach, I have so much respect for all our former players and what they’ve done. That’s why we’re so open to their involvement in developing our current teams.”

U-17 USWNT head coach Tracy Kevins is often one of the few senior women in the technical area. She’d like to change that. Kevins welcomes former players at her camps and also urges current YNT players to consider coaching.

“We have to inspire players to think about coaching as a full-time profession, to go on to the next license or take the next coaching opportunity or look for opportunities where they can work full time in the game,” said Kevins. “We want our players to know that post-playing career, there’s a career in coaching.”

Earning a high-level coaching license involves years of training and can be expensive without financial support. It also requires time away from their regular jobs for classroom sessions and field work. Therefore, players who play five or more years with the senior U.S. National Team or at the pro level automatically qualify for a B-license course, the second highest coaching qualification in the U.S. Soccer Coaching Education pathway. Current or retired players who participate in youth training camps also earn valuable credit towards required coaching hours.

While U.S. Soccer wants former WNT players coaching the game, it’s women in coaching initiatives are not restricted to National Team players. With the National Women’s Soccer League entering its eighth season, there are dozens of players who perhaps never made it to the National Team, but who still have tremendous experience in the professional game and a passion for teaching young people.

Thanks to the generous support of U.S. Soccer donors, U.S. Soccer ran its second coach education course for current NWSL players in October at its new, state-of-the-art National Development Center in Kansas City. NWSL players who’ve played for at least two seasons were eligible to enroll and earned their C-licenses cost-free during the week-long training. Additional cost-free women’s training sessions for NWSL players are slated for 2020.

It will take some time before the number of women managing from the sidelines are at levels U.S. Soccer would like, but the pathways are there. With thoughtful, targeted investment, there’s no doubt U.S. Soccer and the NWSL will continue to generate a lasting pipeline of skilled female coaches at the college, pro and National Team levels. U.S. Soccer plans to bring the same determination and creativity it has used on the field to train players who will succeed in the technical area.