NTX Rayados return for a ninth straight Open Cup and – led by a familiar raft of schoolteachers and administrators from the Dallas area – they’re hoping to match their heroics of 2018.
March 12 2020
Open Cup

It’s not hard to imagine them younger. Imagine them not as principals and teachers, or as NTX Rayados hunting an Open Cup dream, but just as kids. With the right kind of eyes, and a little squinting, you can see them roving those same locker-lined halls. Carrying on. Cracking wise. Skipping class – irritating, and secretly delighting, their teachers the same way their own students do to them today.

“We weren’t really big fans of school as kids,” says Tito Salas seated behind a large desk in his office at Emmett J. Conrad High School in Dallas. He’s sharp in a grey suit and tie. He dresses for his assistant principal job every day, a walkie-talkie clipped on his hip ready to crackle with whatever needs his attention. “When I was a kid I just thought my teachers and principals were all robots – that they lived and slept here at school and all they ever did was make homework for us to do.”

Salas is a motivator. The first from his family to graduate high school. He’s an operator in the best sense of the word. He’s a natural leader in his hallways, on the soccer field and in all those in-between spaces where good advice takes root and deals get done. He founded NTX Rayados ten years ago as an outlet to keep playing after the heat and fire of college competition. He won two national junior college championships with the Richland Thunderducks, and he’s got a giant gold ring on his finger to prove it.

A lot of the Rayados players, friends since they were kids, had dreams of going pro. But we all know how dreams can go. After starting his career in education as a substitute PE teacher, Salas moved fast in the Dallas Independent School District. Soon, his old friends in the team were asking how they could get involved. There are now a handful of professional educators who pull on an NTX Rayados jersey every Sunday in the North Texas Premier Soccer Association.

“I never had anyone looking out for me when I was in school, so I want to be that person for a kid coming up,” said Alberto Rodriguez in the high school’s auditorium. That’s his classroom. He teaches Theatre Arts there, a few paces up the hall from a hand-painted, student-made banner hung in 2018 wishing he and Mr. Salas luck in the Open Cup. That was the year these part-timers reached the Fourth Round and earned the right to play eventual champions and MLS side Houston Dynamo. “We want to be the people in the lives of these kids that says ‘hey, it’s ok. You’ll get through this. Keep pushing through.”

Christian Okeke scores his third game-winner of #USOC2018 & sends Texas amateurs @Ntxrayados through to a Fourth Round date with an @MLS side.

Many of his teammates will tell you, without prompting, that Rodriguez is the best striker they ever played with. Here at school in his polo shirt and pressed khakis, getting kids ready for a performance, you’d never know it. He’s humble. All the Rayados are. “I was an athlete all my life, and so I didn’t really know anything about the fine arts,” said Rodriguez, who earned all-American honors at Richland in 2006 and played in the Rayados’ 2019 Cup run to the Second Round.

“It’s not hard to connect the two – performing and playing soccer,” Rodriguez said of the similarities between the field and the rehearsal stage. “A rehearsal is like practice. I know about practice. And the nerves are just like before a game. It’s my job to let the kids know, ‘hey, you know how to do this – it’s just like rehearsal.’ I just try to prepare them for anything.”

Teaching is more than lesson plans and summer vacations. Sometimes we’re cynical. And sometimes we forget. It’s a job that takes heart and soul and can bleed you in ways that desks in cubicles and computers just don’t. But that doesn’t keep the Rayados’ band of educators from turning up for training every few days. After all, they’re by far the best team in Dallas’ amateur ranks and they’ve made a habit of upsetting semi-pros and professionals both. Wins over OKC Energy and FC Wichita were big shocks en route to their lopsided 5-0 loss to the Dynamo in the 2018 Open Cup (they held the score at 0-0 until the 55th minute, but the Dynamo’s superior fitness eventually proved out).

Having qualified for the last eight editions of the tournament, the Rayados are now among the most reliable Open Division competitors in the tournament’s last decade.

And they’re a family – they’ll be the first to tell you. They all use the word. Again, you can see them as kids, as they were years ago, out there on the grass under a hot Texas sun. They’re chasing a soccer ball and a dream. They smile the same way their kids do in the halls while they get caught up in the jokes and play the game they’ve loved their whole lives.

“We’ve known each other forever,” said Victor Pinal, a mouth full of braces making him seem younger then his 29 years. He was born in Mexico and was a former member of FC Dallas’ academy and two-time All-American at Richland. He’s now a local Junior High School teacher. “We know each other like family and yeah, sure, sometimes it’s hard to get out to training because it’s a lot for one day, but it’s something I love doing. I get to teach and I get to go out and play the game I love. Out on the field, you just forget about everything and have fun.”

With a late equalizer & peerless penalty-taking, @Ntxrayados edged @lrrangers to reach the Second Round of #USOC2019. GAME 📺 HIGHLIGHTS ⤵️ pic.twitter.com/635AlltRHx

The Rayados sit on a bench in a lonely piece of shade. They take their time and share the events of the day as they change from their work clothes to their soccer gear. The young ones, some of them still enrolled at Richland and other area colleges, are shy. But they soak in the spirit. They’re there to bring speed and lungs and heart to the team, but they’re also there to learn.

Training will be more laughs and keep-away than wind sprints. Tito Salas is on the phone, fielding calls. Someone’s out because he needs new tires and his insurance expired. These things happen because this is amateur soccer and life takes up a lot of space. When his suit shirt comes off, you notice it. Up near the top of his arm: an NTX Rayados tattoo. “It’s the most painful one I ever got,” Salas admits about the ink there on the soft skin of the upper arm, nestled in with a full sleeve of elaborate work.

The Rayados matter to Salas. This much is clear. To put together an amateur team as good his takes effort and time – it takes more than talent. In this year’s Open Cup, he’ll be without his younger brother Luis. He’s getting married. “That’s his excuse,” ribs older brother Tito in good humor. And Pinal himself, a powerful holding midfield presence, is likely to miss out because obligations have a way of intruding on those who play the game in their spare time. But Tito Salas is a man with a plan. He’s not the kind of guy to get caught napping – on the field or off it. He’ll have a team ready – A strong one too –when they open their account against NPSL new boys Denton Diablos at the University of  North Texas (LIVE on ESPN+) on 25 March.

The teachers in this team don’t get caught up in what it means for them to pull off the kind of heroics they did back in 2018, but rather what it might mean for our kids as all good teachers call their students. They think about how it might help one of the youngsters in the team get a shot at that elusive professional dream – and if not, maybe it just might take them to four free years of college and a future like the one they all found. It’s a chance for the younger players to see what’s possible in a place where there are more locked doors than open ones. 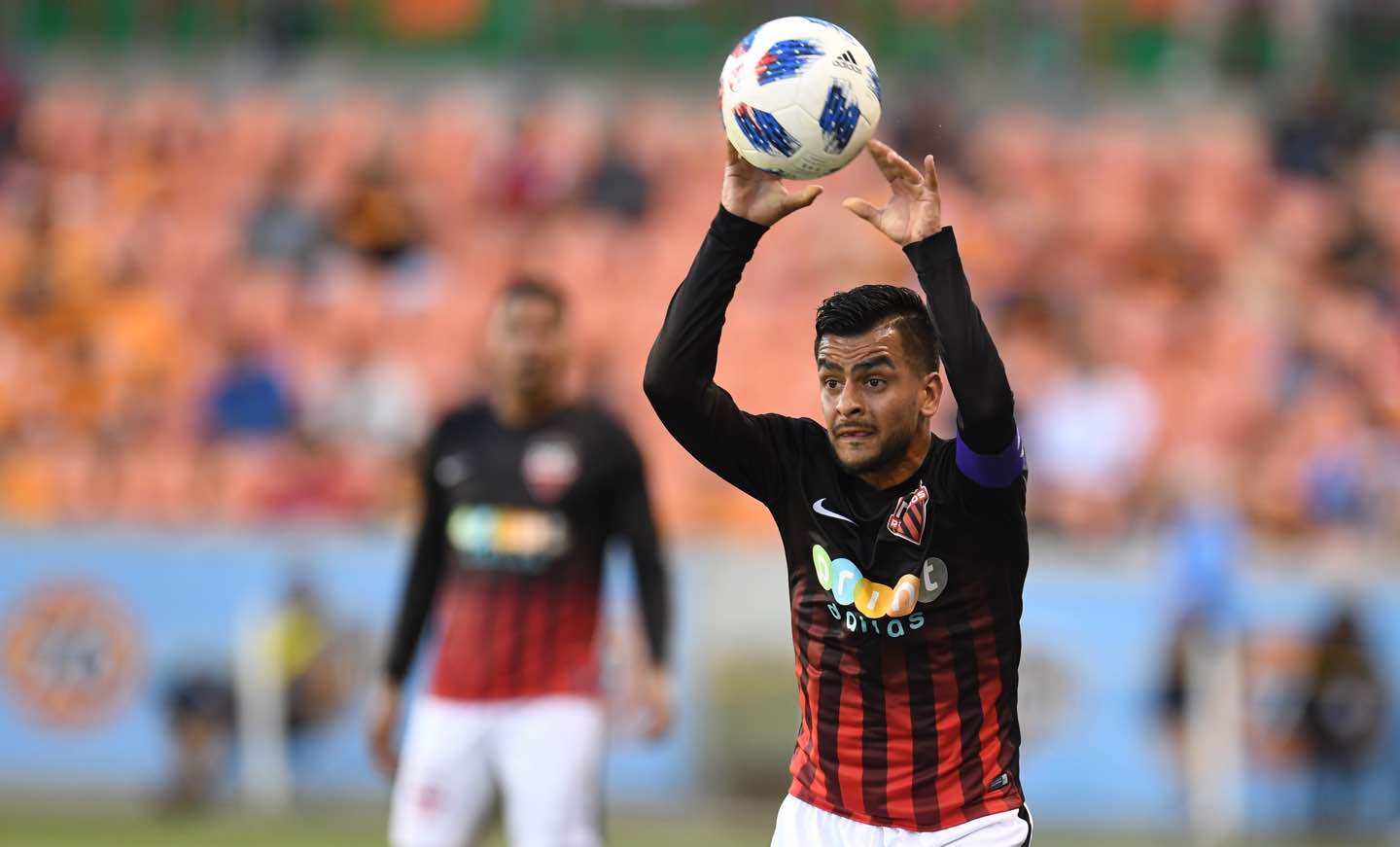 Tito Salas – the man in charge at Rayados – against Houston Dynamo

And it’s a chance to play, to maybe go up against the big boys once more – the ones they once dreamed of being. There’s always that too. “I met a guy recently – 78 years old and he’s still playing,” said Salas, the man in charge, with a wistfulness in his voice. The sun sets on training and another workday creeps ever closer. “So I asked him ‘what’s the secret?’ and this wise old man just said to me ‘Never stop playing; just don’t ever stop.’”