An Emotional Day to Wear a U.S. Jersey: The Day the USMNT Qualified for the 2002 FIFA World Cup

U.S. Soccer continues to ask all members of the soccer community to help #BendTheCurve on COVID-19 and stay home with Tuesday’s night’s re-broadcast of the U.S. Men’s National Team’s 2002 FIFA World Cup Qualifying match against Jamaica from Oct. 7, 2001 in Foxborough, Mass. The first National Team sporting event after the September 11th attacks, the game was also pre-empted on ABC because of the start of the war in Afghanistan. Against the backdrop of it all, the USMNT rallied together to defeat Jamaica 2-1, and thanks to other results in the group that day, qualify for the 2002 FIFA World Cup


When the U.S. Men's National Team walked onto the old Foxboro Stadium field in Foxborough, Mass. on Oct. 7, 2001, the players knew they were shouldering a massive responsibility and some personal pressure.

Beyond the fact they needed to break a three-game losing streak and bolster their chances of qualifying for the 2002 World Cup, the Americans knew they were playing – now, more than ever - for their country as well.

The United States was still ailing, still grieving the horrific terrorist attacks on the World Trade Center, the Pentagon and a plane that crashed in Shanksville, Pa., which left almost 3,000 dead and an estimated 25,000 injured 26 days prior on Sept. 11.

"It was a special day, a very emotional day to wear an American jersey," U.S. captain Claudio Reyna, who wore U.S. flag armband that day, said. "It was the first time a U.S. team represented the country post 9/11. There was anger on the team, too. We just carried all the feelings everybody had throughout the country. Prior to kickoff, there was pre-game chant from our supporters where they were singing ‘F-bin Laden’. Everybody's mind was clearly on that." 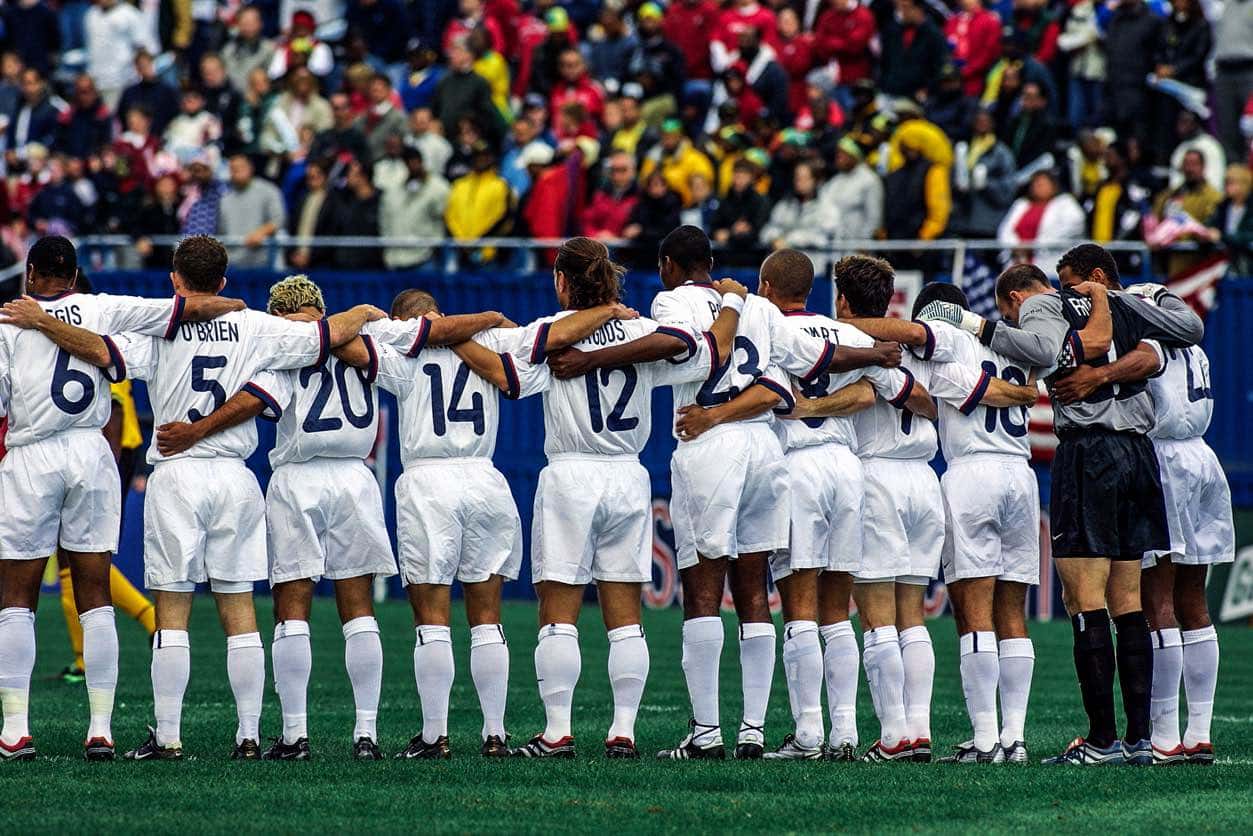 "There was a tremendous amount of patriotism within the team and stadium," added forward Joe-Max Moore, the scoring hero.

Entering the penultimate Concacaf hexagonal contest, the odds were long that the USMNT (4-3-1) could book a spot to their fourth consecutive World Cup that day, needing a precise set of results from all three matches. Along with a U.S. victory against Jamaica, they needed a draw in the Costa Rica-Mexico match in San Jose, and most unlikely, to see Trinidad & Tobago – who had one point in the Hex through eight games - upset host Honduras.

A loss for the United States would have meant elimination.


"In terms of qualifying that day, we knew our chances were basically slim to none," Moore said. "The only thing we were focused on that day was getting the three points. A draw was like a loss in that scenario."

The team was in the midst of a confounding skid. After jumping out to a 4-0-1 mark that included the first dos a cero qualifying result over Mexico in Columbus, Ohio on Feb. 28, the USMNT dropped three consecutive qualifiers. It began with a 1-0 loss at Mexico on July 1, continued with a stunning 3-2 defeat to Honduras at RFK Stadium Sept. 1 -- a rare Saturday morning kickoff and the Americans' first home qualifying loss in 16 years -- and climaxed with a 2-0 defeat to Costa Rica on Sept. 5. at the intimidating Estadio Saprissa.

"We weren't playing well," Reyna said. "We started off really well in qualifying and just as sometimes it can happen over these month-long qualifications, you get players out of form and some injuries."

Adding to the drama of that Sunday was the USA’s invasion of Afghanistan, which began just hours before kickoff. The news coverage knocked the match off ABC, which meant there was no live broadcast. In the USA locker room about an hour before kickoff, head coach Bruce Arena notified the team about the attack.

"We really didn't need any more motivation that day," Moore said. "As it turned out, yes, I do believe it fired the guys up even more."

A beautiful game it wasn't. World Cup qualifying is more about survival and results than entertaining the home crowd. Three points would be all the satisfaction they needed.

"The team was really focused," Reyna said. "It wasn't a day about playing pretty. There wasn't much of a flow to it. It was about getting a result. That was the mindset of the team leading into the training sessions. I certainly feel very old school when I see the clips and the highlights because we played at old Foxboro, which was grass, which wasn't the best. We knew that we weren't going to move the ball that well, so we were really efficient in the way we played and found our opportunities. Our game plan that day was based on being aggressive and creating chances." 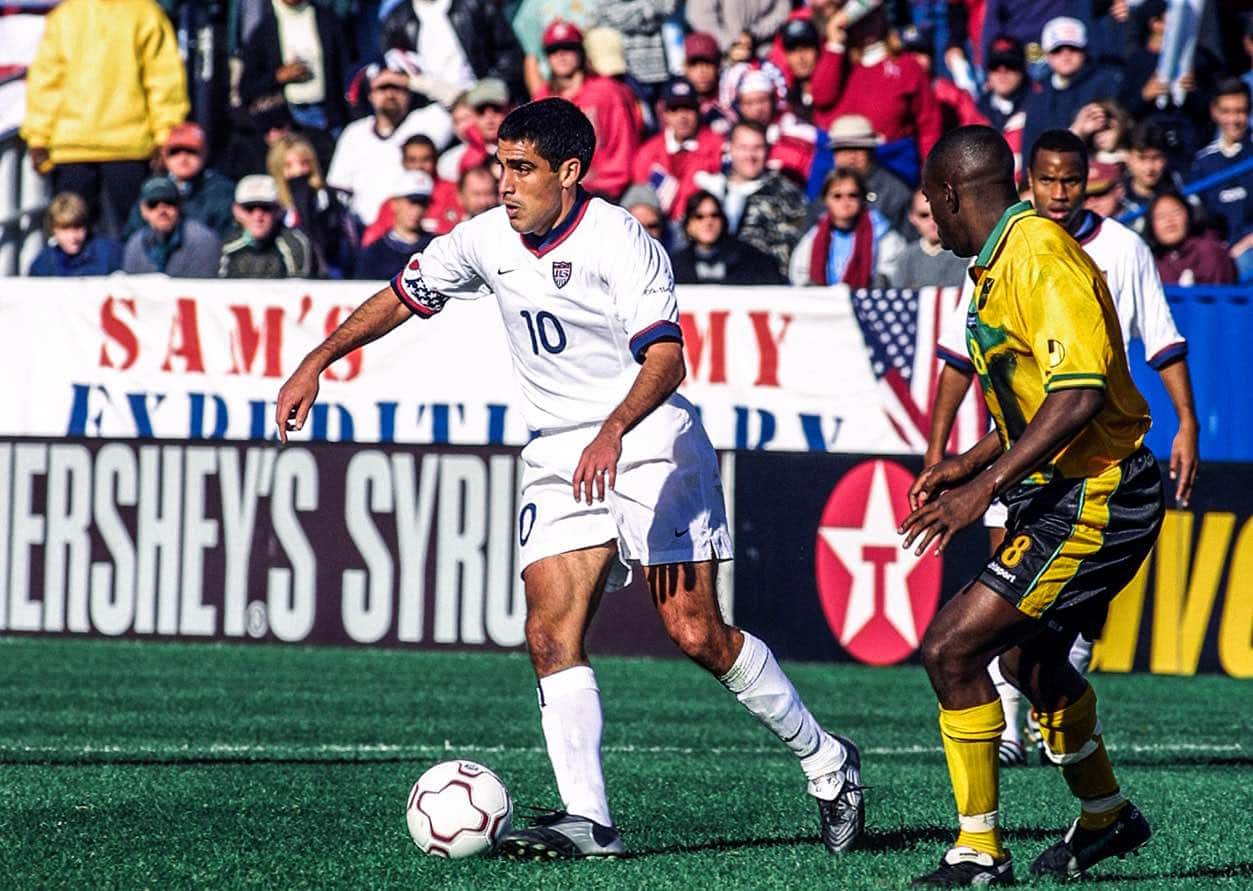 Arena selected his ninth different starting lineup in as many qualifiers.

"Everybody had to put in a 100 percent shift to get a result. And we did," Reyna said. "We had a lot of experienced players. It was guys in their early 30 and late 20s. Bruce's mind set was, 'I need to go with guys that are going to step up.’ Landon [Donovan, then 19] was the lone youngster. Everybody played really well. I don't think anyone played great, but everyone put in like a seven out of 10 performance."

Added Moore: "The team was upbeat and confident going into the game. That team had something special and it was more than just talent. It was a collective 'Nobody's gonna out work me mentality,' a certain chemistry forged over the years between players."

With the match barely four minutes old, the U.S. gave 40,483 fans something to cheer about. After Chris Armas was fouled by defender Theodore Whitmore on the left side, Reyna sent a free kick toward the near post. A diving Moore (pictured below) headed the ball past goalkeeper Aaron Lawrence from six yards for an early 1-0 edge. 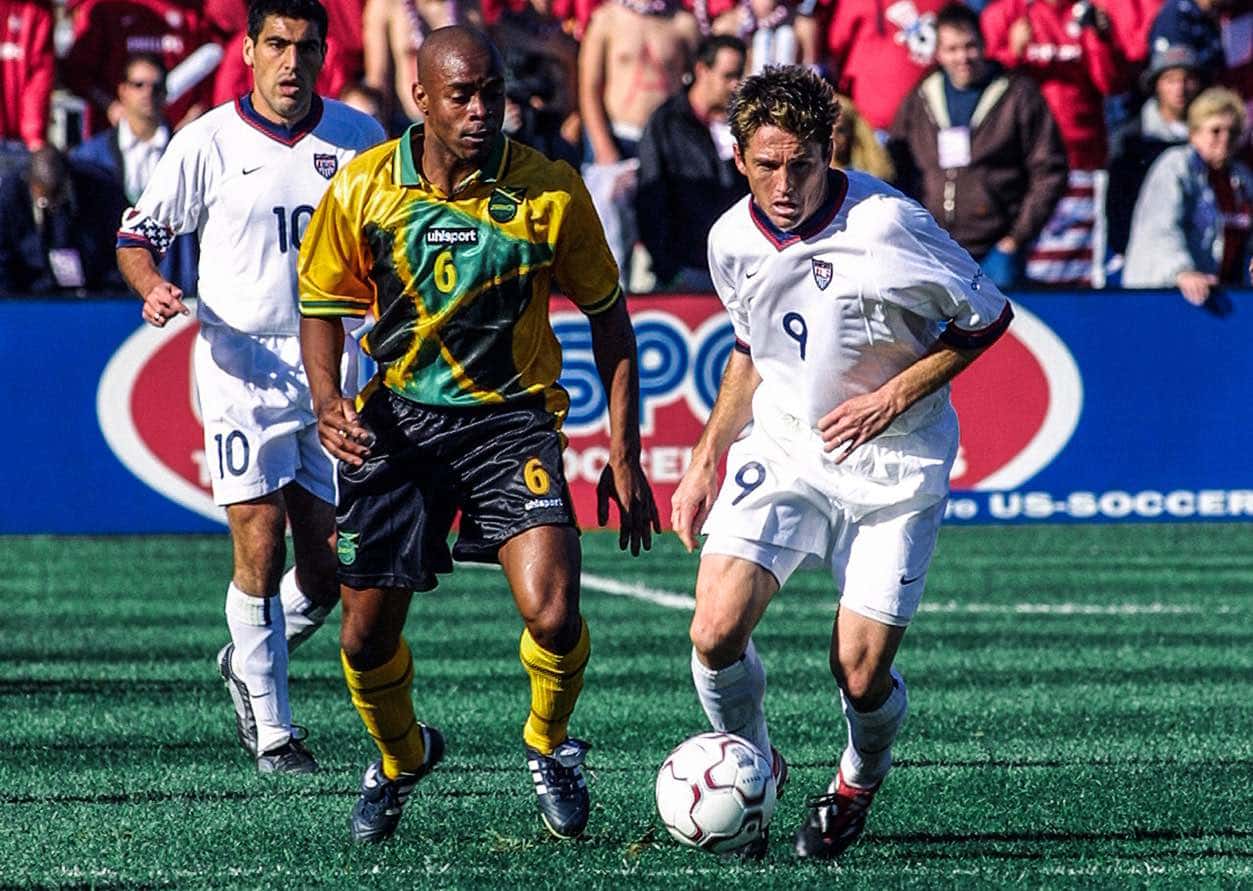 "He is the example of a player who is going to play in that game,” said Reyna, adding that Arena "wanted competitors in that game and Joe-Max checked that box 100 percent. He's going to give everything. He was a warrior. … One of his strengths was over three to five yards, his runs in quickly behind the defense were really good. The first goal, we kind of gave each other the eye, and I knew it was going for him. We just had that kind of play in training so many times. We grew up playing on the Olympic team. We knew each other really well."

While the game wore on, updates on the other matches came through intermediate sources. There were no smartphones, no live score websites. Producers in the television truck had connected to friends in San Jose and San Pedro Sula, who were providing information through AOL Instant Messenger (AIM) which was then relayed to the press box and ultimately by walkie-talkie to the field.

In Foxboro, the score remained frozen at 1-1 until the 81st minute. Tyrone Marshall took down Donovan, who had but eight matches of international experience, on the right side of the penalty area for a PK.

With the 40,000 plus fans at the edge of their seats – and in the vacuum of a canceled live television broadcast - Moore volunteered to attempt the critical kick. He took a few steps backward toward the penalty arc for a running start before he powered a low, right-footed shot into the right corner as Lawrence dove the other way.

"I think Bruce had chosen Claudio or Earnie [Stewart] and I to take any penalties that day, so when Landon got taken down in the box, I just remember looking at those guys and saying 'I feel good,' " Moore said. "After I scored, my reaction was a little strange I know, but that was just in response to one of the Jamaican players talking some smack before I took it. He said something nasty to try and throw me off." 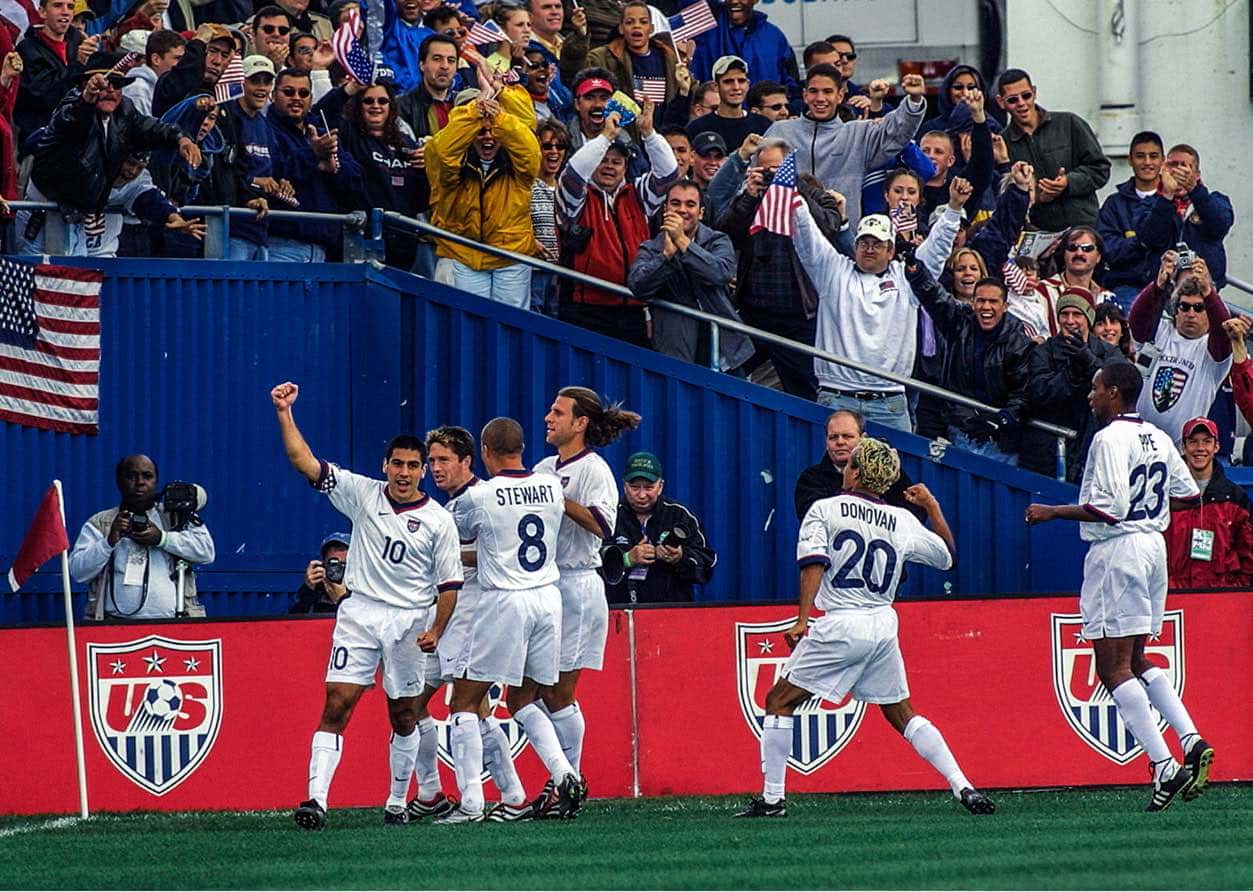 Reyna admitted he looked away. "It was a great penalty kick," he said. "It proves the kind of character he had to take responsibility. He stepped up and he put it away. Right before he shot it, I kind of turned away and just saw everyone's reaction. I couldn't watch." 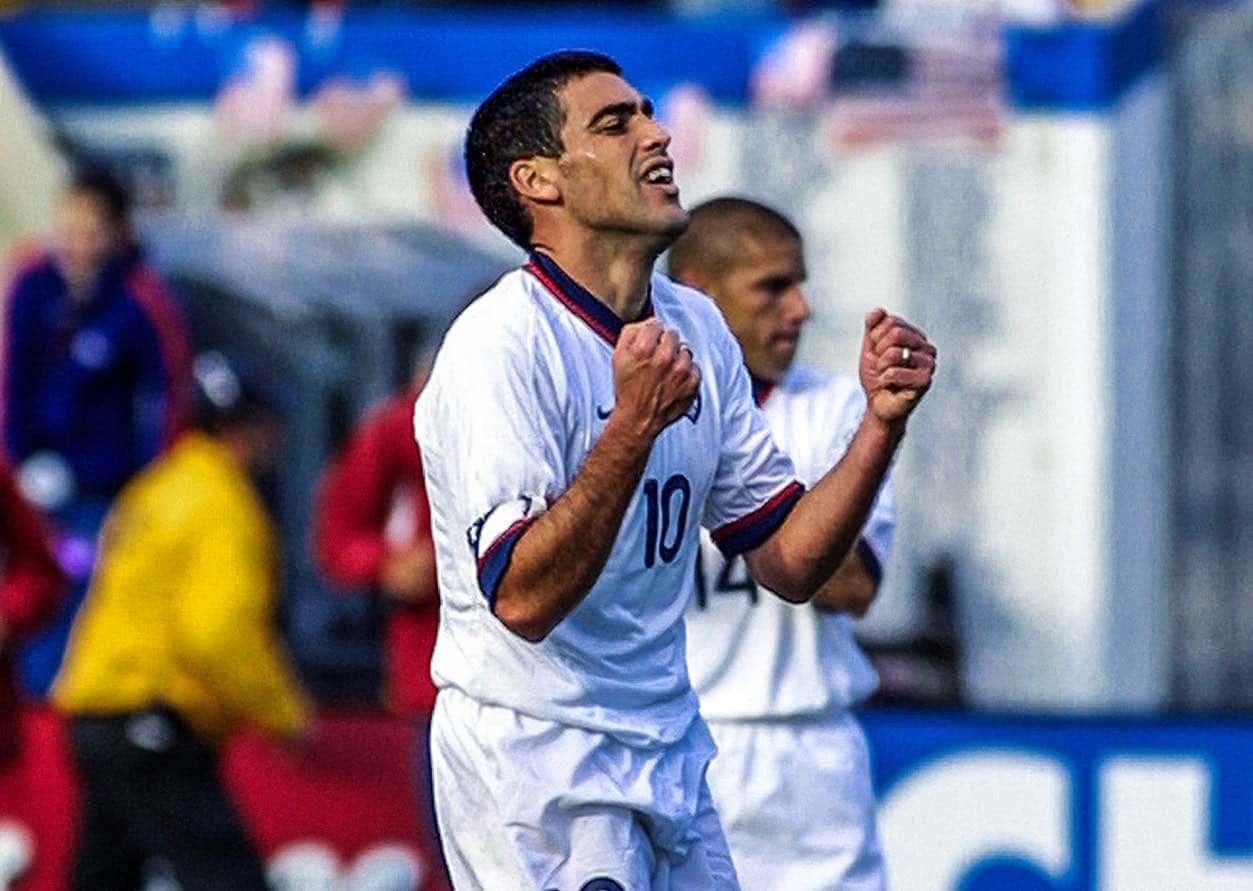 Five minutes later, Moore came off to a huge ovation – he was the only substitution Arena made that day. "I really enjoyed playing a big part that day at Foxboro," said Moore, who had two stints with the New England Revolution. "My wife and I created so many great memories while living and playing there. So, it ended up being a pretty special day.“ 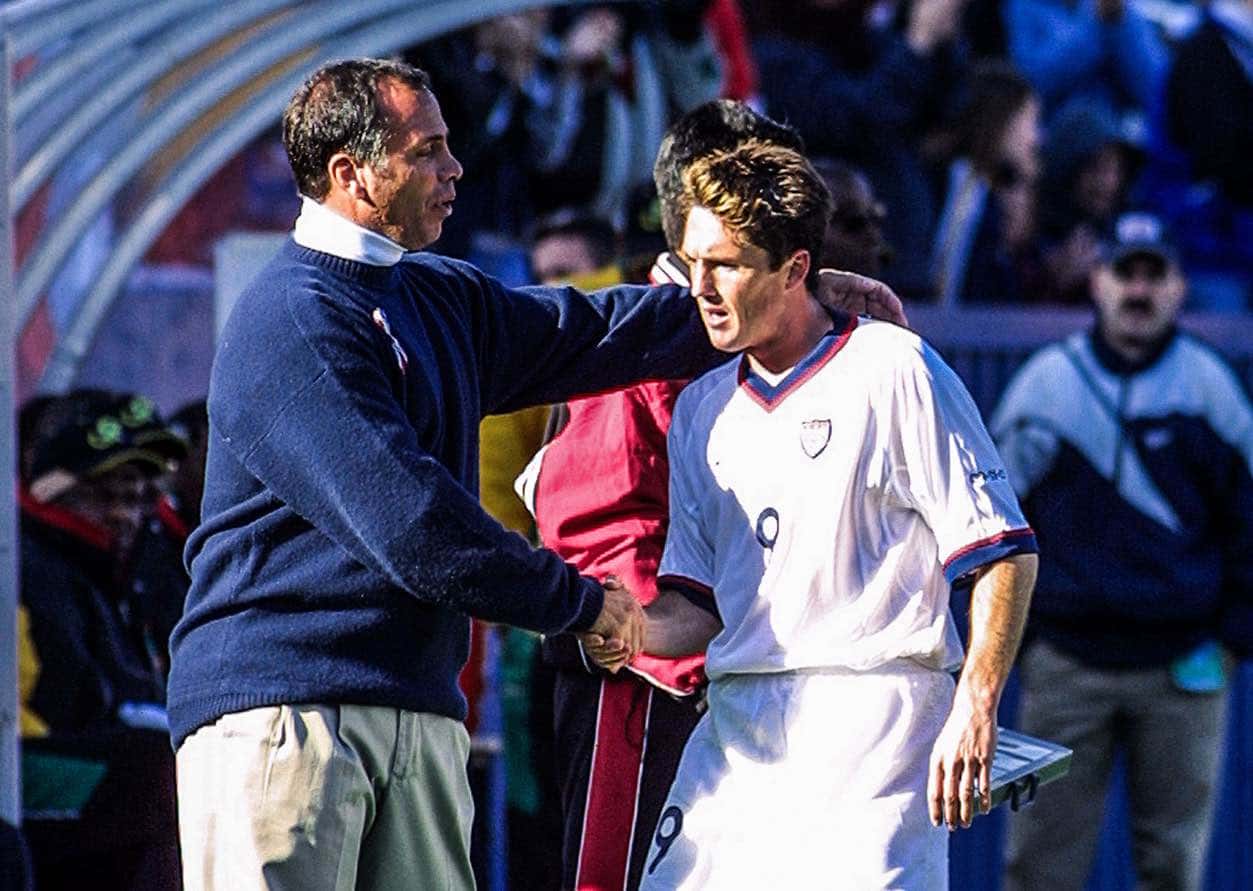 After five tense minutes of stoppage time, the U.S. had earned a 2-1 triumph, living to fight another day. Attention then turned to other results, which were not yet final, and players mulled around the field in anticipation. The first report came from Costa Rica, where the matched ended in a 0-0 draw. Two down, one unlikely result to go. Then about four minutes after referee Rodolfo Sibrian had whistled the match over in Foxboro, word came over the radio and the fans who were still celebrating watched curiously as the U.S. players erupted.  Moments later, the PA announcer ended the suspense. The final from San Pedro Sula:

The U.S. got the other two results it needed to qualify with one game remaining. 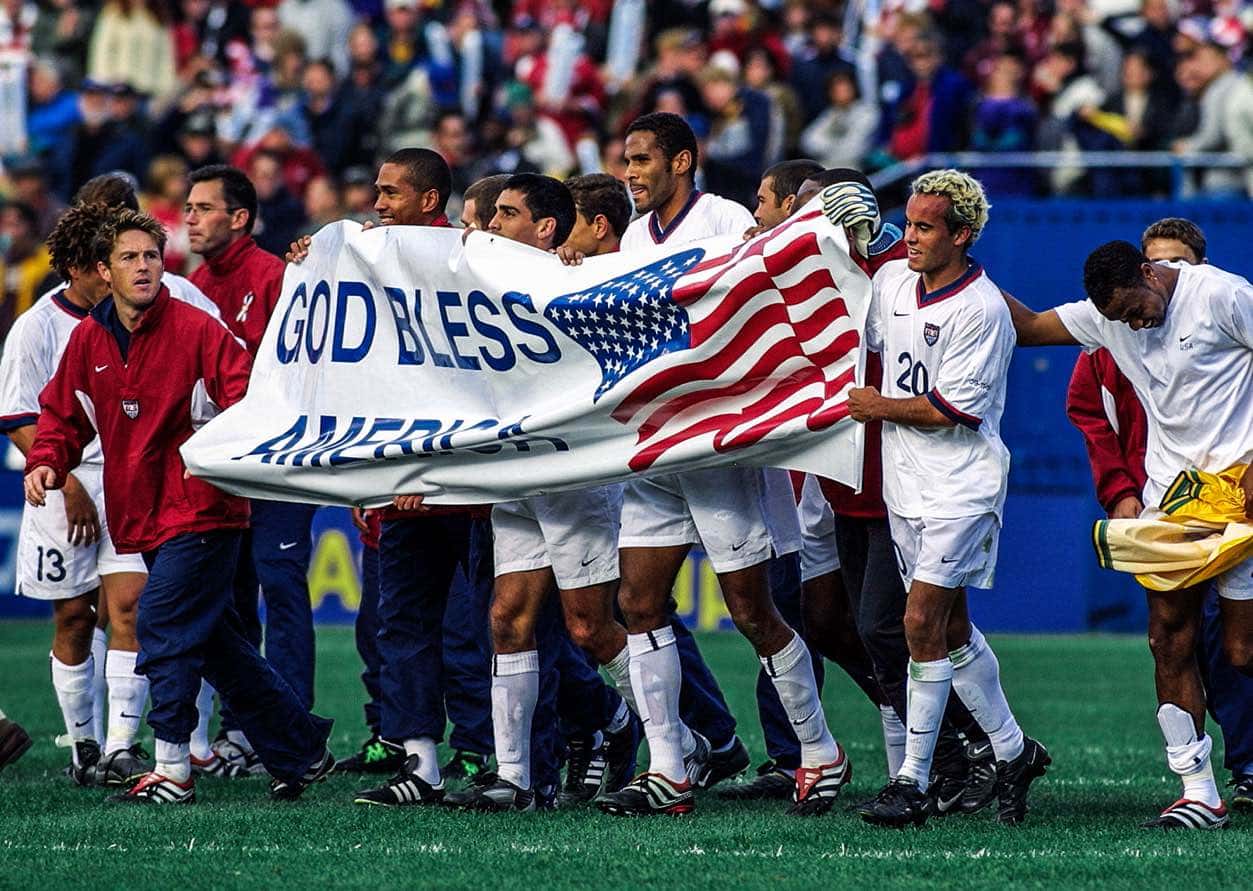 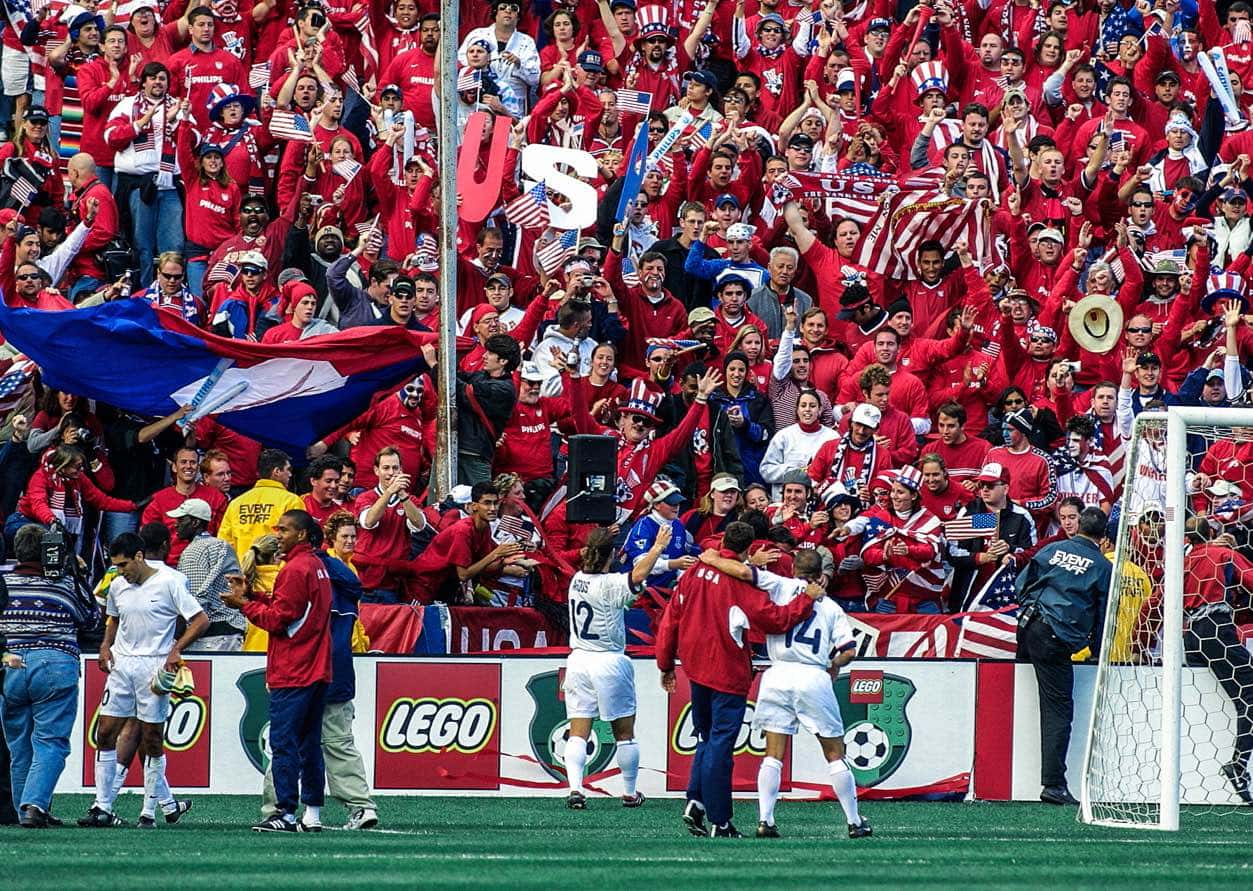 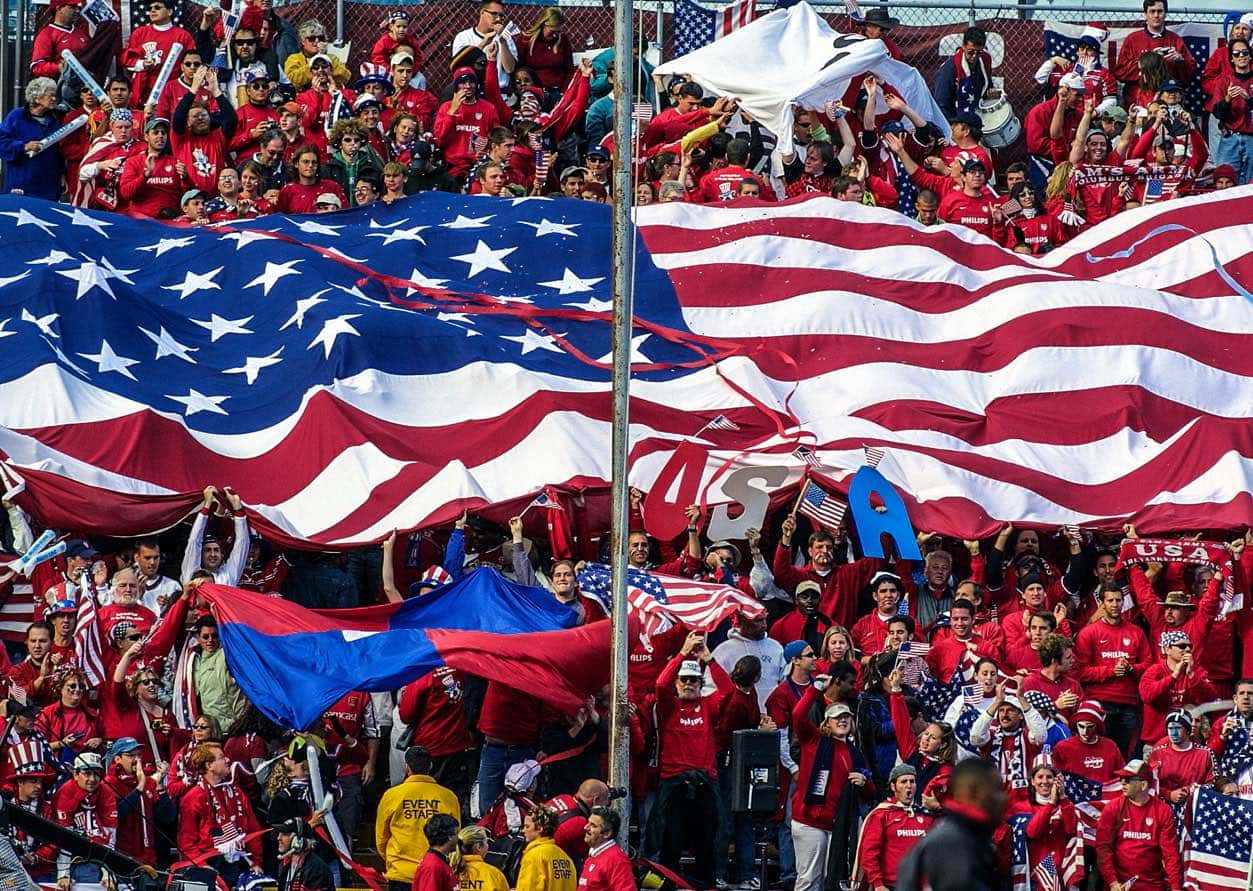 "It was huge relief, and everybody was ready to celebrate," Moore said.

"It was party time," Reyna said. "It was a fine night out in Boston for the boys."

Reyna, a member of four World Cup squads, understood how rewarding that day was.

"Going to another World Cup was amazing," he said. "All the qualifications I've been through, it's a challenge and it’s very rewarding to quality for World Cups because you just never know. My whole life, if I could get to play in one, it would be incredible. So, every opportunity you get you're just so thankful.

“What happened that day was special because we could take people's mind off what happened, represent the country well and in a way a big success for the country was needed. Sports brought everybody back after 9/11. We felt we played our part as well."