26 Years Ago Joy Fawcett Gave Birth to the First of Three Kids She Would Have During her Legendary International Career, Blazing The Trail For the USWNT Moms to Come
Michael LewisMay 10 2020
Featured

One of the best-known Soccer Moms of her generation plans to celebrate Mother’s Day by spending some time hanging out with two of her three daughters and watching a movie or two at home in Rancho Santa Margarita, Calif.

"Chilling would be great for me," Joy Fawcett said.

Chilling is something Fawcett didn’t do much of during her legendary career that spanned 1987 through 2004, during which time she became the first American to have a child and return to the U.S. Women’s National Team, something she then did twice more. Having raised three daughters in the midst of Hall of Fame career, the USWNT great has more than earned some relaxation at home.

After having her first daughter, Katey, in 1994, Fawcett brought new meaning to the term “Soccer Mom”, which defined suburban mothers during the 1996 Presidential election. She has embraced her pioneer status. 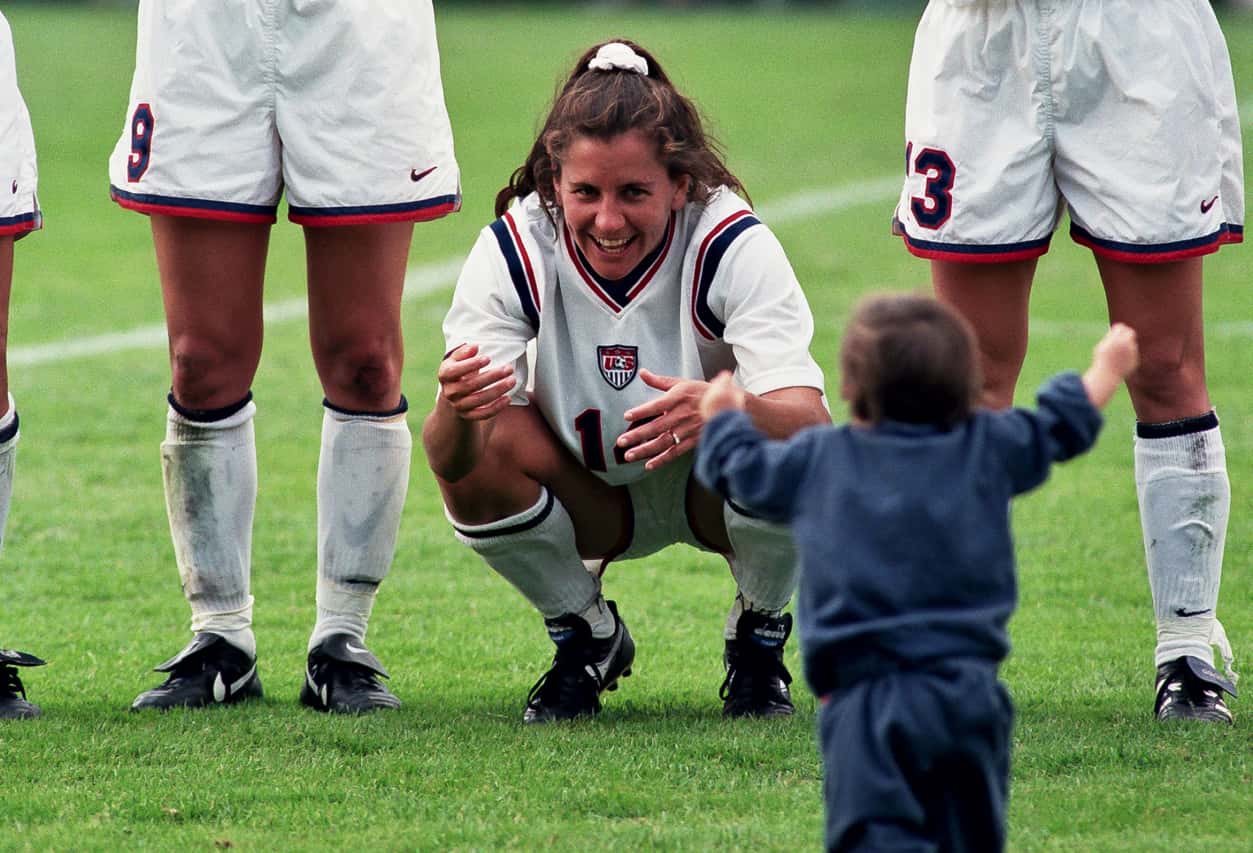 “I don't mind it. It's an honor,” she said. “It was different for me. Back then, it was more of the mom cheering on the sidelines. I got to do both. That was the image for me when I was growing up because my mom was a Soccer Mom."

In 1993, at the age of 25, Joy and Walter Fawcett wanted to start a family. Joy was hitting the prime of a prolific career that included 241 international appearances, two Women's World Cup championships and two Olympic gold medals.

"I wanted to be a mom earlier so I could hang with my kids as I got older, so I could keep up with them," said Fawcett, who asked then-USWNT head coach Anson Dorrance for his approval.

"But I knew if I did it, my kids had to go with me," she added. "I didn't want to leave them at home and just take off. [Anson] was like, “That's fine, you can bring them all along.' I didn't think what that would entail. I didn't even think of the details until each one popped up."

And for good reason. There weren’t many manuals or any sort of road map about how a female athlete should deal with pregnancy, especially one performing at an elite level. So, Fawcett just about wrote the book on how to juggle two major responsibilities at once.

"Just the pregnancy itself was interesting. I had no clue," Fawcett said. "There wasn't a lot of information around. I would train as I was training anyway. I kept doing my fitness and doing my sprints, doing all the things I usually did. I played until I started showing because no one would play with me once I got a belly. They were worried."

Fawcett said her doctor "kind of freaked out a little bit," when she told him about her workouts.

Since there were no role models, Fawcett figured things out as she went along. "There was a lot of unknowns in the beginning with the first pregnancy with Katey,” she said. “It was just kind of play it by ear and how you felt and what happened. The doctors didn't know a lot either then with exercising."

On May 17, 1994, Katelyn Fawcett was born. Eight weeks later, the U.S. Women's National Team held a training camp near the family’s home in Foothill Ranch, Calif.

"I was so worried," Fawcett said. "I was not very confident as a player, so worried about keeping my position. I didn't want to lose my spot. I wanted to stay with the team. That was a concern for me, not taking too much time off."

Fawcett brought Katey and her mother, Beverley Biefeld, to watch her teammates train. Dorrance told his star defender, "You look great, come out and play," she said. "I was like, sure. I just jumped into camp right away and played.”

Seventy-five days after giving birth, Fawcett returned to competitive soccer, starting in a 2-1 win over Germany in Fairfax, Va. on July 31, 1994. 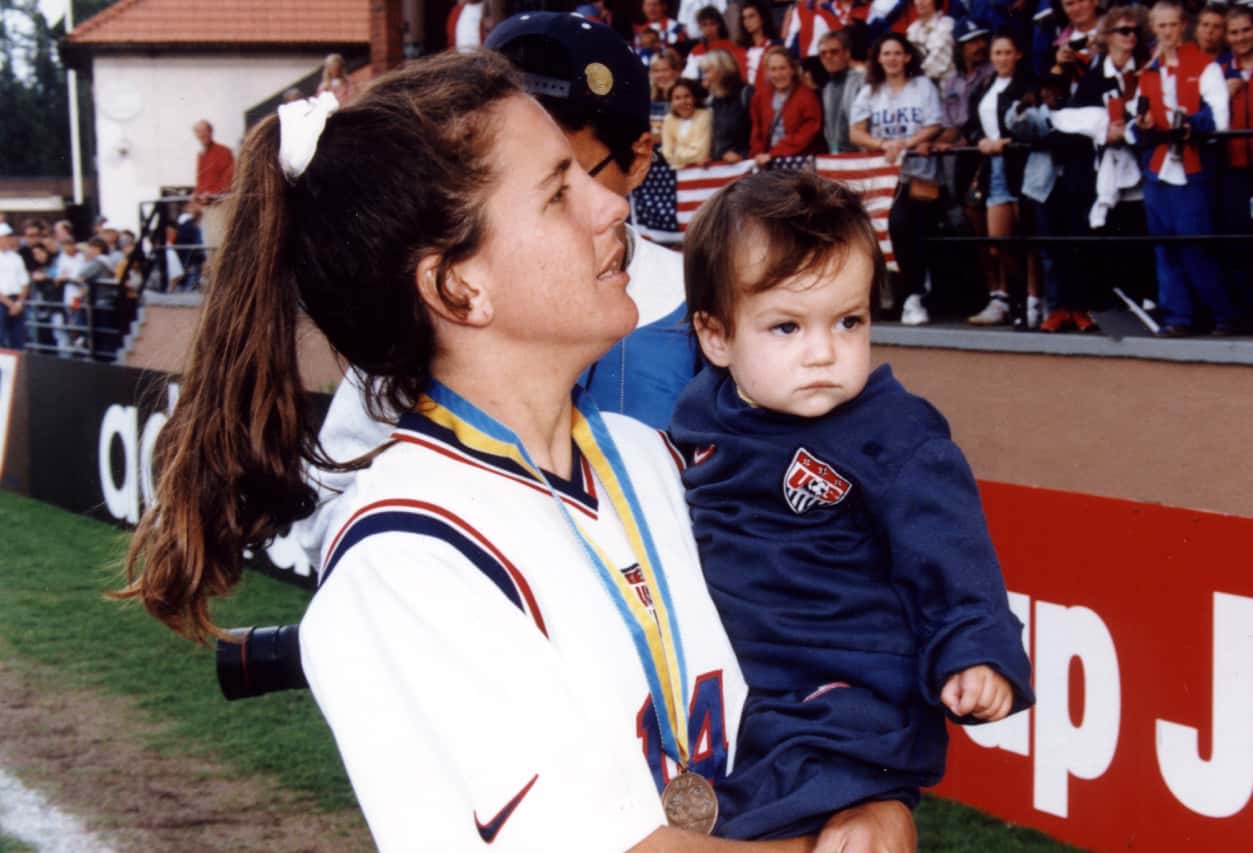 Give Joy and Walter a lot of credit for impeccable timing as they continued to grow their family. All three of their kids were born during dates that span three weeks over the summer, Carli three years after Katey and Madilyn four years after Carli.

"I was lucky that I could get pregnant pretty much when I wanted so I could time them in-between [major tournaments],” Joy said.

Katey was born a year prior to the 1995 FIFA Women’s World Cup and two years before the 1996 Olympics. Carli was born in 1997, before the 1999 WWC and 2000 Olympics and Maddie entered the world in 2001 before the 2003 WWC and 2004 Olympics. True to fashion, Fawcett returned to play for the San Diego Spirit of the Women's United Soccer Association in 2001 within six weeks of giving birth to Madilyn.

"Every pregnancy is different," Fawcett said. "With the second one, I knew a little bit more on what it took to come back. I learned a lot more about what you could do. How you could push yourself more and what you lost. It was harder to keep your speed when you have a big belly when you couldn't lift your knees or sprint to stay in shape. That was probably the longest to come back from, for me anyway. It's easier to keep the cardio part, but the speed part was harder to come back.”

Taking a baby on the road also proved to be a whole other ordeal, since it simply hadn't been attempted before. 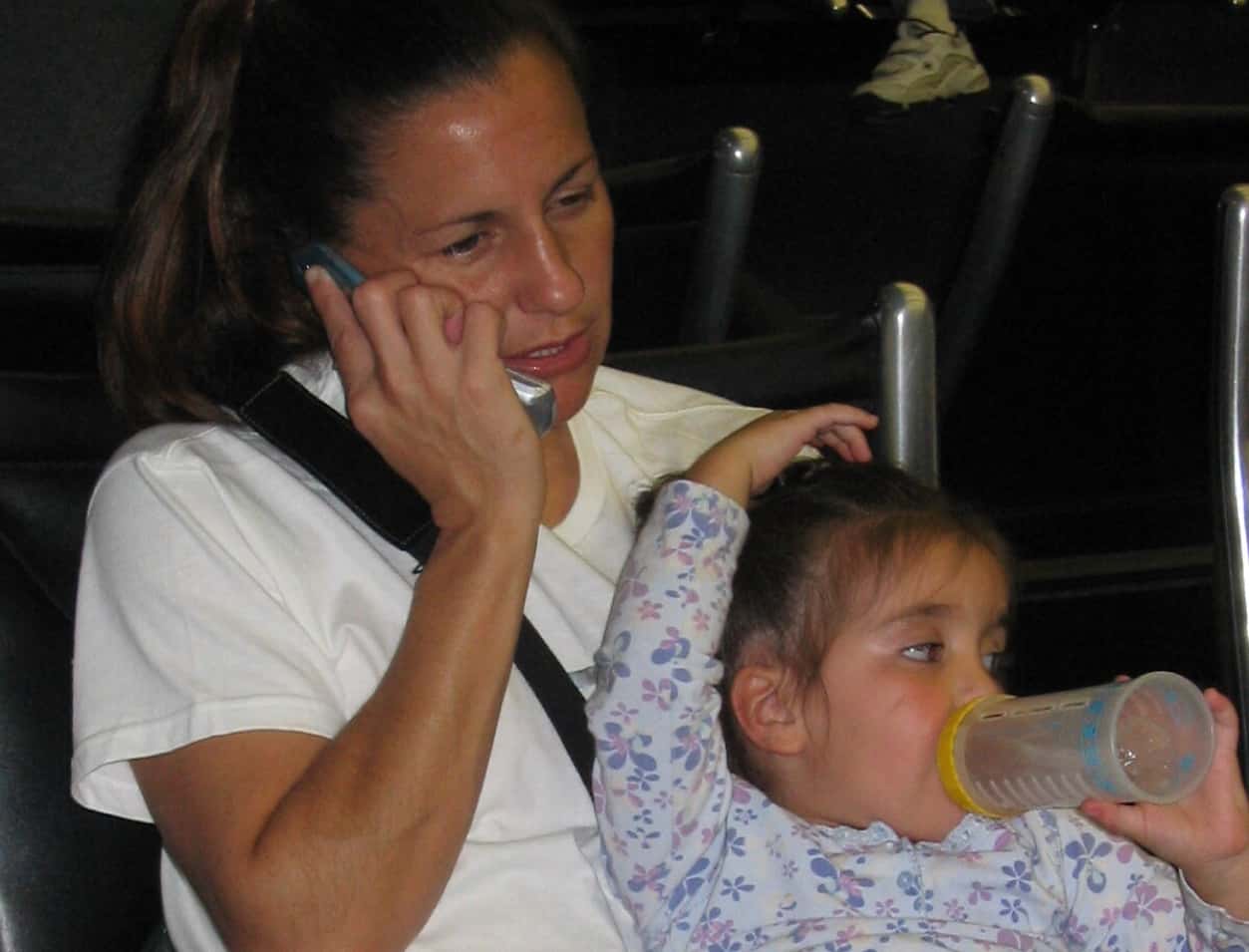 "There were challenges that I didn't expect," Fawcett said. "When I brought Katey, I had to share a room. Then I felt bad because an infant is not sleeping all night, waking up. So, I felt bad putting that on any of my teammates, even though they didn't care. They were so great about it. But that stressed me out, having to wake up at night to feed and disturb my teammate."

Fawcett roomed mostly with forward Shannon MacMillan --  "Mac loved kids,” said Fawcett. “It was easy and it didn't bother her at all” -- and defender Amanda Cromwell.

"Everyone played with the kid, Lil [Kristine Lilly] and Brandi [Chastain]," she said. "Everyone took their turn in helping out and keeping them busy. Teammates were great because they always helped and offered to help, but I felt bad about that, too. I didn't want them to be distracted by the baby or anything. I wanted them to be able to focus and play."

But the distraction had a flip side. "Once you left the field, it gave you something else to focus on instead of stressing about the game too much," Fawcett added.

"He was great from the beginning," Joy said. "He so much wanted to be a part of their lives. When we had to relocate to Florida, he quit his job, relocated with us. He was the nanny for a lot of the trips. He loved that part of it." 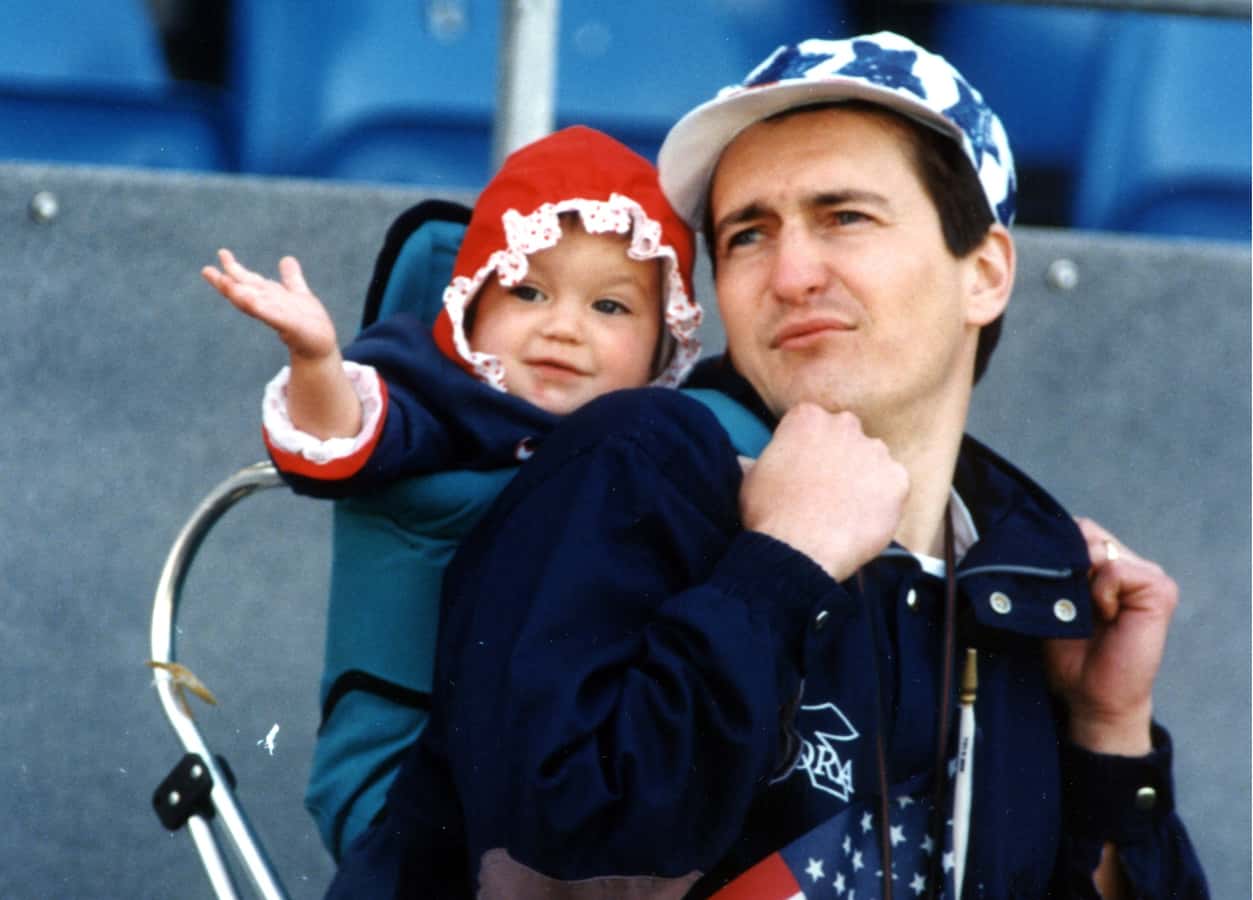 The third part was the entourage of baby equipment -- strollers, fold-up cribs, diapers, car seats, toys, the works. "The amount you had to bring along with a baby, you don't realize," Fawcett said. "If we were doing an international trip, I brought along formula and baby food because I was worried about what you would get there."

As more kids were added to the mix, "It kind of got more complicated and it kind of got easier, too,” Fawcett said. All of her baby gear was transported along the team gear. Soccer balls? Check. Cones? Check. Baby stroller? Check.

When fellow defender Carla Overbeck had her first child, the two shared the nanny. While on the road, they made sure their children would put on costumes and go trick and treating.

"They also could entertain each other a little bit more, have someone else to play with," she said. "When the kids got to be three on the road, it was fun. I was just looking at pictures. It was a lot of fun at all the things they did."

Two decades later, the fun has yet to stop.

Carli and Maddie will spend Sunday with their mother. Katey is in Oklahoma.

"They already sent me weird presents. Katey sent me a little tripod because I have to shoot these videos for work all the time and she knows that I suck at it," Fawcett said with a laugh.

Fawcett's job is with Pure Game, a non-profit organization that teaches character education to children, including at-risk kids, through sports and soccer. "We teach them how to believe in themselves and that's what I wanted for my kids. Every kid should be able to believe in themselves and do what they want and go for no matter what their situation is. Being a mentor for those kids is so fun."

Some 26 years after Fawcett, now 52, set the benchmark, more female athletes are having children in the of their careers. Two examples: North Carolina Courage and USWNT striker Jessica McDonald and Orlando Pride and USWNT forward Alex Morgan, who welcomed her first child on May 7.

When asked what advice she might have for women looking to start a family in the midst of an athletic career, Fawcett replied: "To do it, to go for it if that's what you love. I love both. 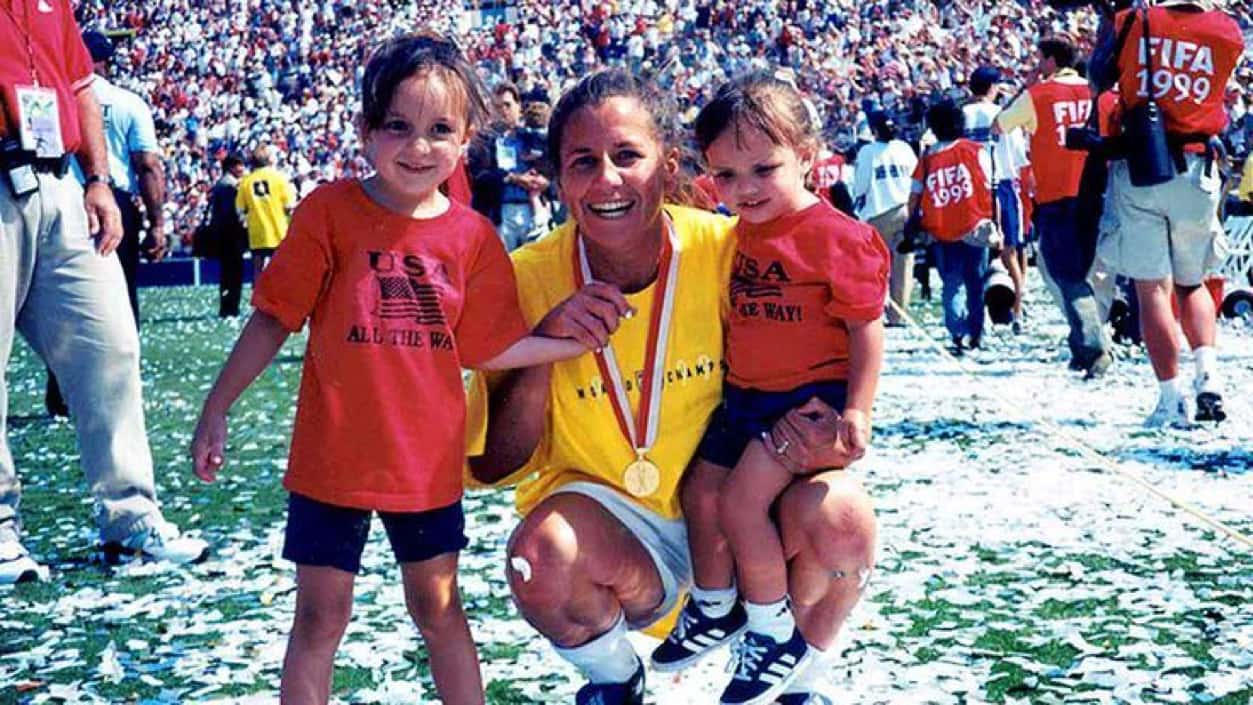 so much if I was doing the right thing just because I took the kids on the road, dragging Katey around. I would come home and I would hear, 'Oh, I need my baby to be on a schedule and I need to do this and that’ and I'm like, 'Am I damaging my kid?' Then I was like trust your instinct about your kid. You know your kid the best. There's so much information out there and so many people who want to tell you what's right for you but trusting your instincts on what's right for you and your child is probably the biggest thing. They're flexible. They can roll with the flow on anything. It ended up being a good thing. They feel empowered because of the people they were able to see and hang with. My teammates were such amazing role models. Today, my kids able to do anything and that's what I wanted for them.”

Perhaps that's the best Mother's Day present of them all.