Tisha Venturini-Hoch was always a cerebral player, but she also was great at using her head.

The U.S. Women’s National Team midfielder, who played for the USA from 1992-2000, was an incredibly skillful player, hard to dispossess, a sophisticated dribbler and armed with a sublime passing ability. She had a knack for picking out a teammate during a slick passing combination or finding a way to get herself in good scoring position.

Then came the most lethal part of her attacking repertoire. While Venturini-Hoch was superb at volleying the ball and was a fine shooter from distance, her unique ability to head the ball past opposing goalkeepers made her one of the best in the world at that skill during her career.


"That was pretty much my bread and butter," she said. "I scored a lot of goals with my noggin."

Over many games and training sessions, former U.S. Women’s National Team assistant coach Lauren Gregg had a front-row seat watching Venturini-Hoch, who played her entire career as Tisha Venturini before marrying Casey Hoch at the end of 2000 just after her WNT career had come to an end.

"Tish was the one of most skillful and tactical midfielders I have ever coached," Gregg said. "Her ability to change the game from wherever played was phenomenal. She was a midfielder but because she was such a student of the game, an incredible tactician and so technical, she had that uncanny ability to excel wherever she played." 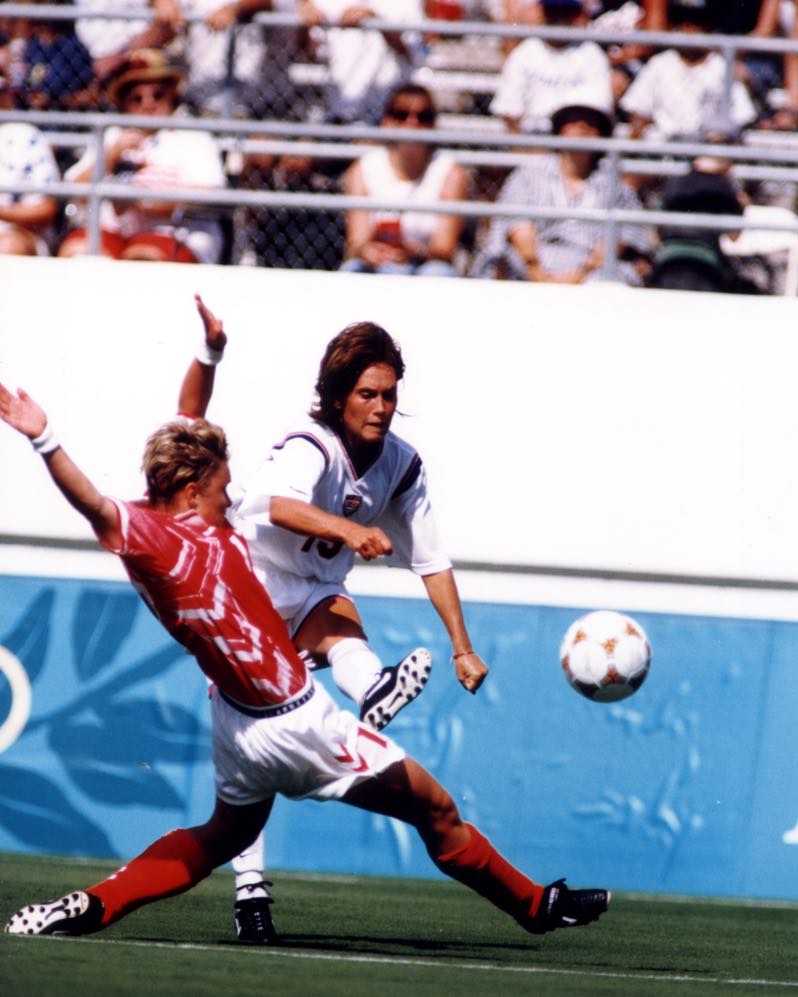 The 5-6 Venturini-Hoch honed her heading skills in her backyard in Modesto, a city about 70 miles inland from the San Francisco Bay Area, and not known for producing soccer talent, playing with neighborhood kids, mostly boys, and her older brother.

"They loved doing headers, diving headers," she said. "We would practice that for fun. I remember being at home and my brother would go up on the lawn and cross balls to me and I would head them into the garage. So that probably helped my cause. Also, I played volleyball and softball and tennis, where you’re seeing the ball and getting it at the peak of your jump or your reach."

Called Tish by her friends, Venturini-Hoch probably is best remembered most for her two header goals in a 3-0 win over North Korea in the USA’s final group stage game at the 1999 FIFA Women’s World Cup. While she doesn’t like to make a big deal about it, Venturini-Hoch also wrote her name into the history books by becoming the first women's soccer player to score an Olympic goal, which she did in the 37th minute of a 3-0 victory over Denmark in Orlando, Fla. on July 21, 1996, as the sport made its debut in the Summer Games.

However, none of those are her favorite goal for the USWNT. That distinction goes to her second Olympic goal in a 2-1 win over Sweden in Orlando, Fla. on July 23, 1996. On that goal, Mia Hamm lobbed a looping cross into the area where Tiffeny Milbrett headed it to Venturini-Hoch, who then beat the goalkeeper with a point-blank header.

"It was a bouncing ball and it bounced up and I was running straight at the goalie,” she said. “I just dove and popped it in. I could have gotten killed. It was kind of a sloppy goal, but it went in and it was in the Olympics. That was pretty rad."

So was her performance three years later against North Korea in which she scored off headers eight minutes apart in the 68th and 76th of a 3-0 victory in Foxborough, Mass. In the final group stage match of the 1999 Women's World Cup. Venturini-Hoch’s backflip celebration after her second goal was an instant classic.

"I could flip around pretty good, so I always had that in my back pocket," she said. "I don't think I had ever done it before in front of my teammates. After I scored, I was running toward the sideline. What else do you do if you get to play in a World Cup and score a goal? Julie Foudy was in the background of a picture and her mouth was wide open. She was like, 'What the heck?’ Nobody realized that I could do that.” 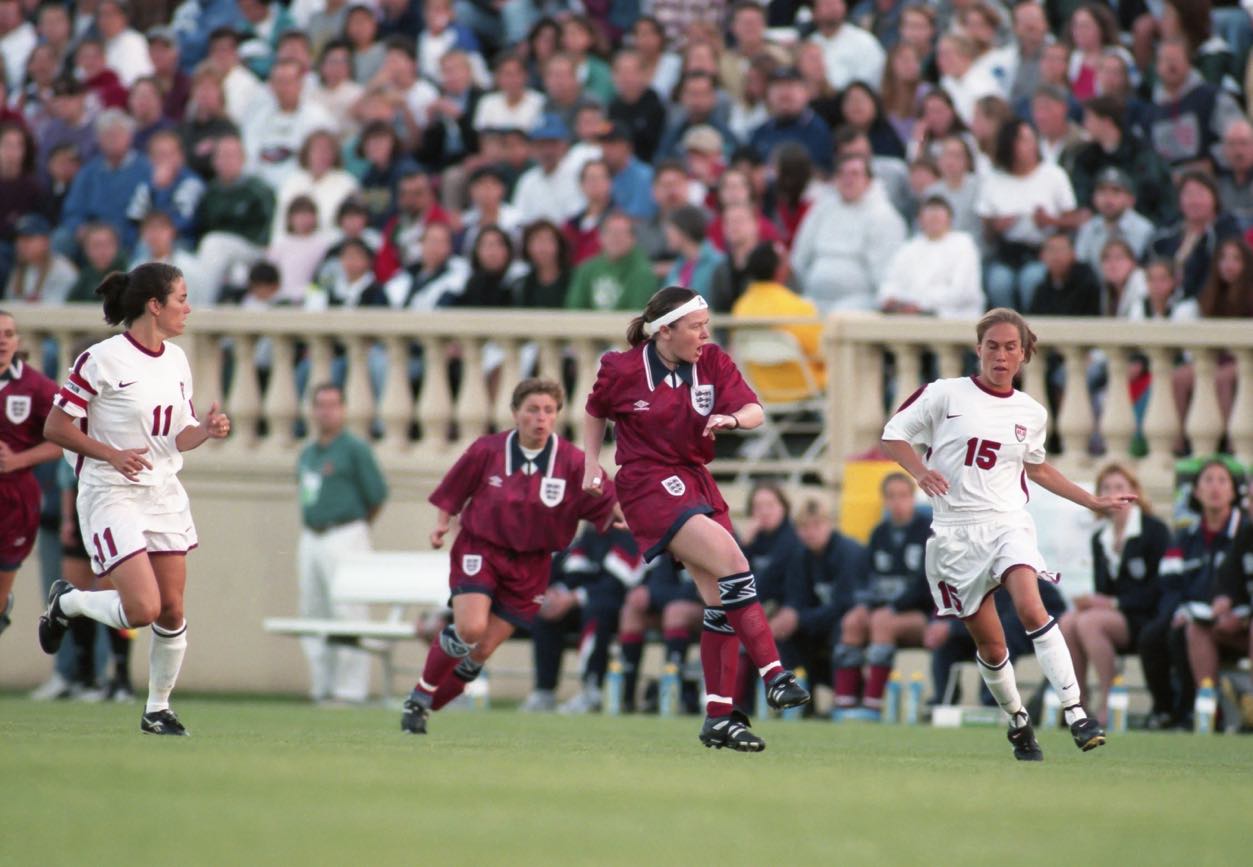 Venturini-Hoch, 47, never liked to lose and didn’t lose very much over her college and National Team career. She celebrated four NCAA Division I championships in as many years at the University of North Carolina, which forged an astounding 97-1-1 mark during that time. Venturini-Hoch also won the Hermann Trophy and the Missouri Athletic Club Player of the Year award in 1994 as the top player in college soccer, but the two blemishes during her time in Chapel Hill -- a loss to rival Duke and a draw with Notre Dame – are still etched into her mind.

"I remember like it was yesterday,” she said. “It happened unfortunately to Duke University, which made it a hundred times worse, on our home field. We had almost a 100-game winning streak on that field. So that was a devastating day for us. But you know what? Maybe that was what we needed, a little spark. Then we ended up tying Notre Dame, who we ended up beating for the National Championship. So, it all worked out.”

The track record of success continued on the international stage, where her tenure with the USWNT spanned from 1992 to 2000. During that time, the USA’s record when Venturini-Hoch's was on the field was 113-14-7, including a Third-Place finish in the 1995 FIFA Women's World Cup, a gold medal from the 1996 Atlanta Olympics and the triumph at the 1999 FIFA Women’s World Cup. 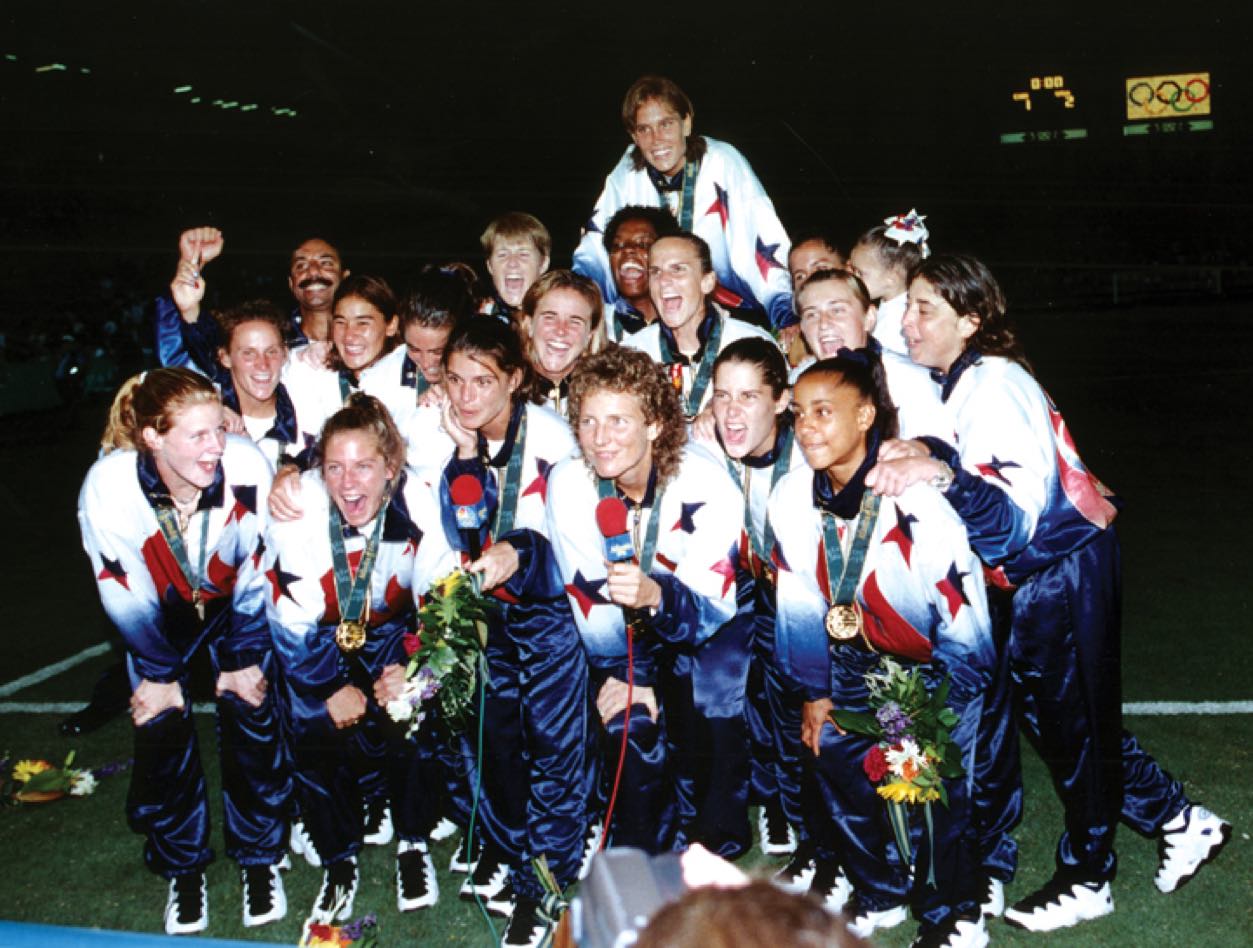 Her ability to score goals when it truly counted was world class. From 1995 to 1997, Venturini-Hoch played in 13 Women’s World Cup or Olympic matches and scored seven times.

"She was a player we would rely on to score in countless games," Gregg said. “She would go in and within 10 minutes, in whatever period of time she had, she was scoring for us. She figured out what the game needed from her and how to use her strengths so eloquently."

Her 47 career goals are still tied for 13th in U.S. history. She would play 134 total games for her country.

During those days, it was easy to get lost in the shuffle of some superstars on the team, which included Mia Hamm, Michelle Akers, Tiffeny Milbrett, Brandi Chastain, Briana Scurry and Kristine Lilly, among others.

"It says a lot about them as people that they're willing to put the team ahead of themselves and do whatever the team needed to be successful," Gregg said. "What separated that group of players they would do anything to support the success of that team and to instill inspiration for the next generation."

After scoring against Korea in the 1999 group stage, Venturini-Hoch didn't see the field again until the World Cup Final against China PR when she came on for Milbrett during overtime in the 115th minute of a scoreless draw.

Foudy was sixth in the shooting order, Venturini-Hoch would have been seventh.

"We were shaking in our boots, man, especially me because I am fresh. These guys played 120 minutes in 100-degree weather. I had just gotten in. I'm fresh, and I'm thinking, 'Oh, God, we've got to win it before it gets to me," she said with a laugh.

Venturini-Hoch got her wish. Scurry saved Liu Ying's shot and Chastain converted the Americans' final attempt to seal a 5-4 shootout win before a crowd of 90,185, a world record for a women's sporting event that stands to this day.

"We had a lot of pressure on us in that tournament as the home team," she said. "We were trying to sell our game. Leading up to the World Cup, we were always doing clinics, we always were signing autographs. We're like, 'Hey, come and watch us play.' We're going go these big stadiums. We didn’t know if people were going to show up, honest to God.”

"It's like we were the Beatles for three weeks, four weeks. Anywhere we went it was mayhem. It was just outrageous."

Venturini-Hoch credited the late head coach Tony DiCicco, Gregg and team psychologist Colleen Hacker for making sure the players did not lose focus during the amazing historic run.

"Tony, he was just so down to earth, he told us, 'Listen guys, you're just the same 20 yoyos that you've always been, We maintained our character throughout without letting it overtake us.” 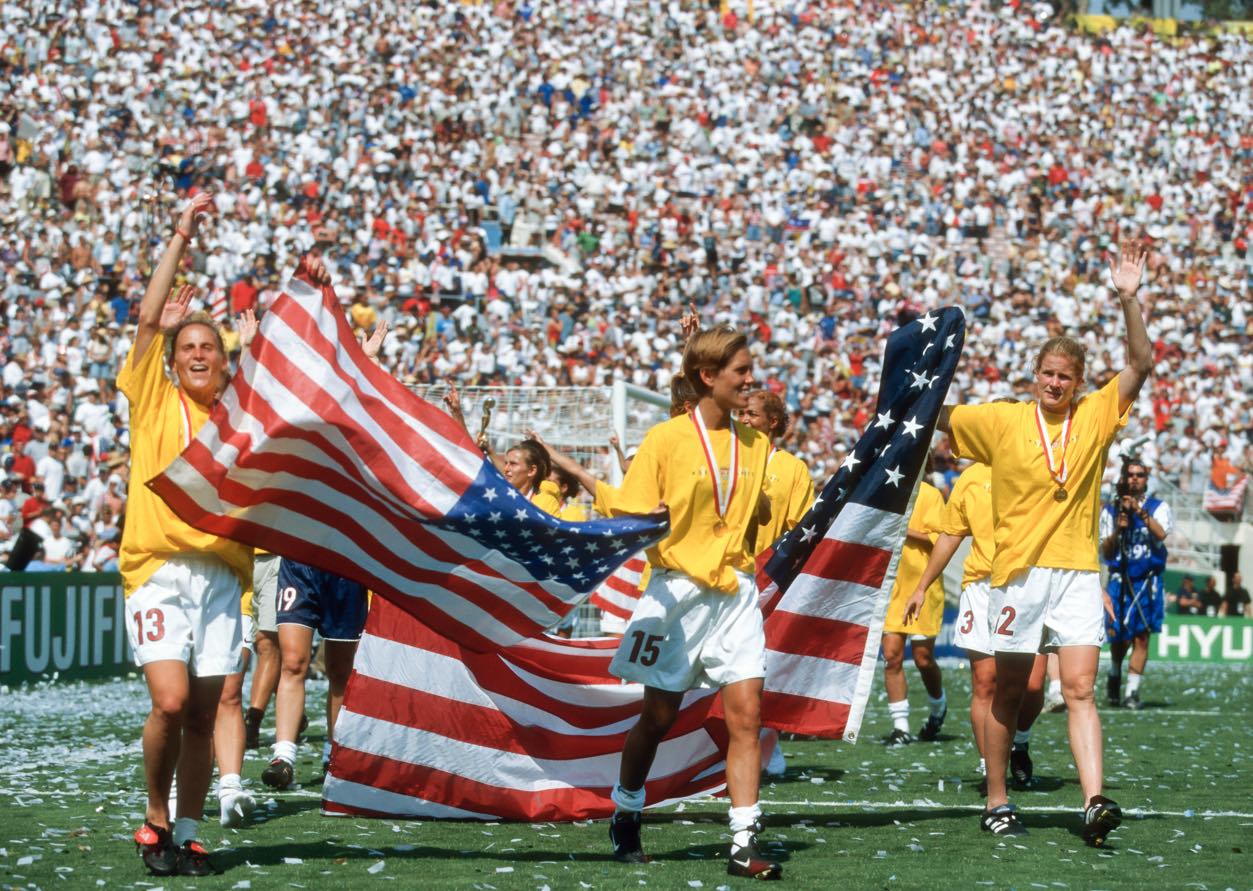 Since retiring in 2000, Venturini-Hoch has operated soccer clinics and camps with her close friends and former USWNT teammates Lilly and Hamm, the inspiration for which came from outside of soccer.

Venturini-Hoch, Lilly and Hamm were visiting former UNC teammate Angela Kelly, then the head soccer coach at the University of Tennessee, and went out for Mexican food with Kelly and legendary Lady Vols women's basketball coach Pat Summitt, who passed away in 2016.

“[Summitt] was like, 'Ladies, what are you guys doing? Are you involved in the game? Are you doing anything?'“ Venturini-Hoch said. “No one was involved but Ang, who was coaching. She told us, 'You guys have a gift. You need to get out there and do something. Plus, you love each other, and you want to spend time together.' So, we were like, maybe we'll do some clinics and camps. She told us, 'Why wouldn't you? Here you have Mia and Kristine, a couple of the biggest names in the world. You have such a wide experience of playing this game and playing at the top level. You have so much to share.'

"We decided to throw some camps together right there. Kristine was taking notes on a napkin with a pen. What are we going to name it? Lil and I were like, 'Let's name it the Mia Hamm Soccer Camp. Everybody will know that.' Of course, with Mia, she wants none of the credit. It's all about the team."

So, the Team First Soccer Academy was born.

"Our message to these young players is, number one, you've got to have fun," Venturini-Hoch said. "It was fun for us. Sure, we played at the highest level and won all these amazing championships and individual honors, but it was fun. People lost sight of that. [Today] it’s all about winning and how good am I and am I going to get a scholarship? What about the fun part? We encourage the kids to get out of their comfort zone and work hard. Don't be afraid to make a mistake because all these kids are worried about of making mistake and they're going to get pulled out of the game or they're going to get yelled at. That’s no way to develop as a player or have fun." 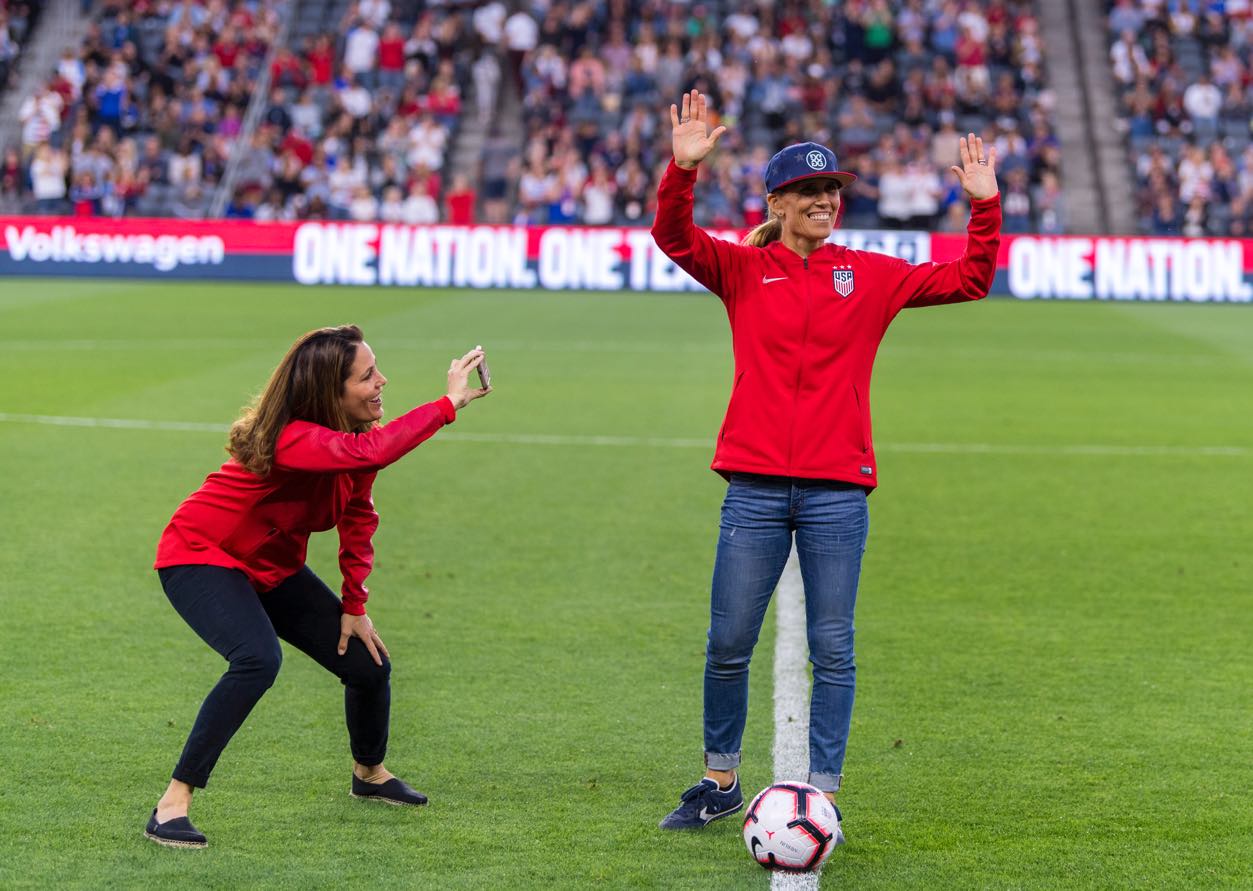 In addition to her work with Team First, Venturini-Hoch, who lives in Orange County, California and has two children, is also an assistant coach with the Newport Beach High School girls’ team.

"I am able to be around them for most of the year and share some of my knowledge and the love of the game with some of the kids who are a little more serious in my community just to help out," she said. "I have really enjoyed that."

And perhaps teach the players a couple of tried and true techniques on scoring with their heads.