How the Colombian-born defender went from Janitor at the World Trade Center to D.C. United and on to the 2002 U.S. World Cup Team
September 25 2020
Featured
At the age of 21, Carlos Llamosa left his homeland, ready to sacrifice a promising career in the sport he loved to start a new life.

Since then, he learned that life doesn't always turn out the way you expected. More importantly, he discovered there’s more than one way to live a dream.

While growing up in Colombia, Llamosa had dreams of playing professional soccer and for the National Team. That dream became a reality; what he could never have anticipated is that it would be achieved representing the Red, White and Blue of the United States.

"Every time you saw the National Team play on TV, or going to Copa America or the World Cup, those are your dreams," he said. "Not only mine. Every child in the country said: 'I want to be there. I want to wear the national team jersey.' But the destiny was different in this particular case."

The youngest of a family with 11 children, Llamosa was soccer crazy.

His five older brothers were either mentors or father-like figures to him. For his father's Sunday league team, he was the ball boy or water boy, among other responsibilities.

"Since I started walking, I was kicking the ball all the time," he said.

As much as he loved the beautiful game, a formal education came first. When Llamosa was a 16-year-old high school sophomore, Colmena, a local second division team, wanted him to practice with the club. Colmena trained when school was in session.

"My parents always made it clear that they supported me to play soccer but school came first, no matter what," Llamosa said. "I decided to go to school and not play." 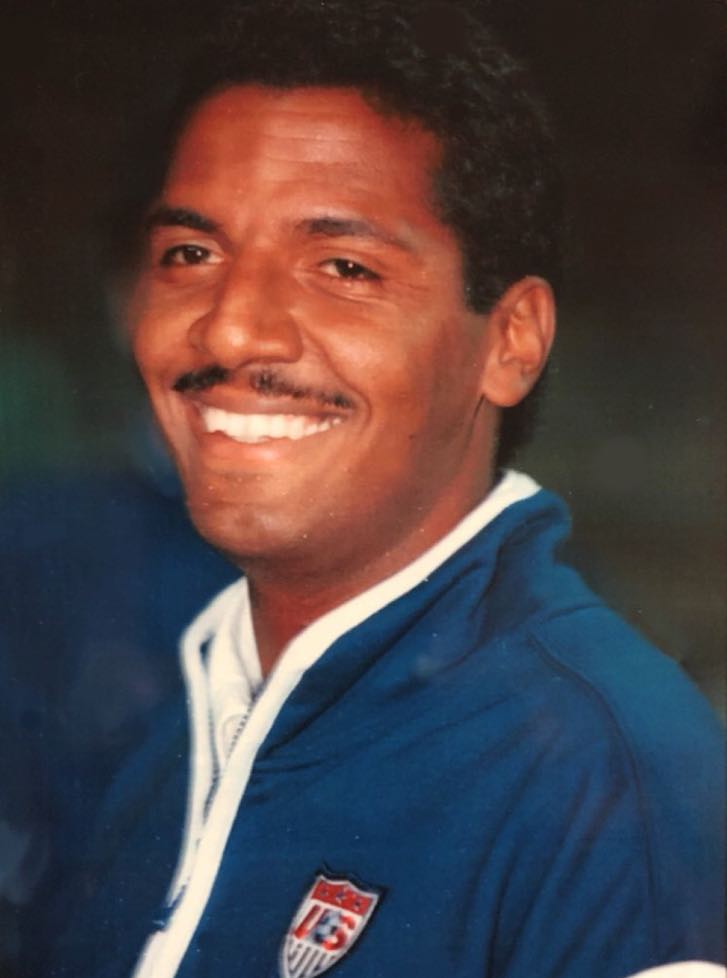 In 1986, club officials offered him a contract. He brought up the school issue and the team said it would be flexible.  "Back then all the games were on the weekend, so I didn't have any conflicts playing a midweek game," he said. "That was special for me."

So was getting an education. Llamosa considered pursuing a college degree because he realized how fleeting a professional career could be.

"I always had it clear. Colombia is a Third World country," he said. "Too many kids coming from lower income neighborhoods look at a soccer career as a way out. But if that is not accomplished then you need a Plan B. Any of those soccer players, they didn't have any education to succeed in life."

Llamosa gave credit to his parents for instilling that in him. He remembered their words: "You've got to go to school. After school then you can go and do college. We support you in your soccer career. Just in case something happens, you have a Plan B for your life." 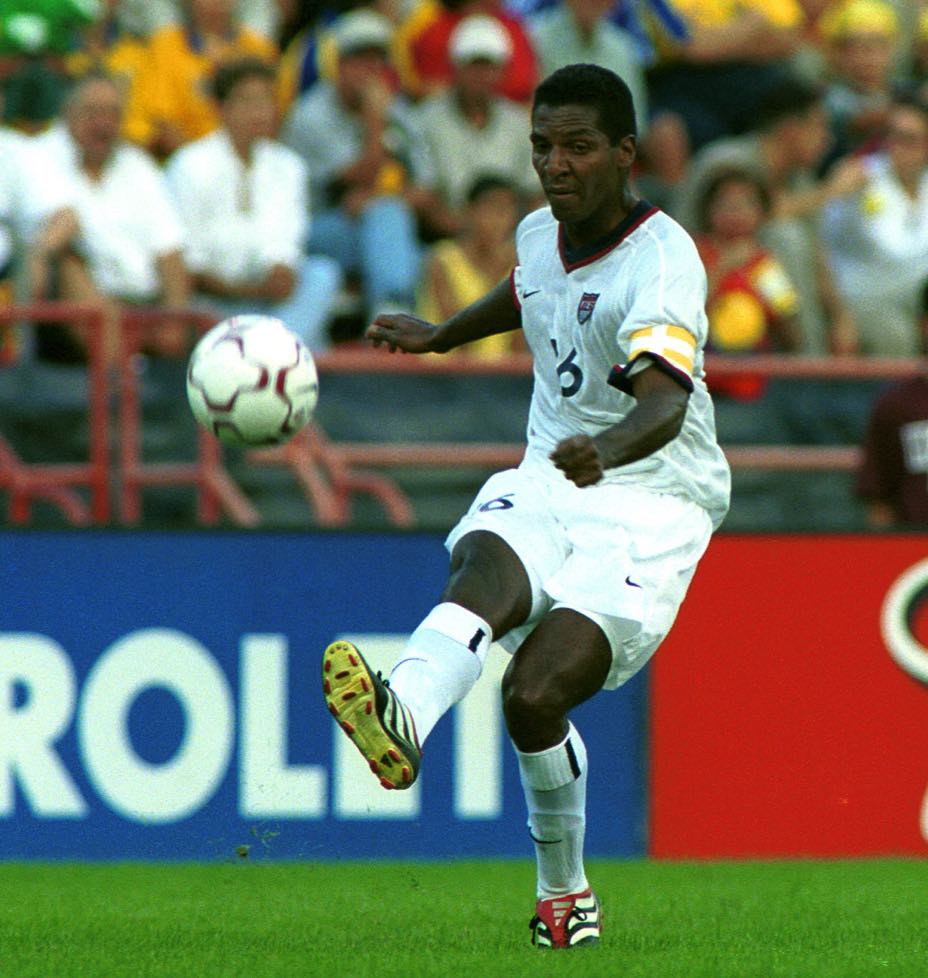 "They wanted the best for me." he added.

In 1991, Plan A worked for Llamosa, who was loaned to first division Atlético Huila.

Several brothers and sisters had emigrated to the U.S. and Llamosa's mother obtained a green card for him. He had no plans of moving but wanted to use the card to visit his siblings in New York.

Llamosa then encountered problems with Colmena.

He had excelled at Huila, which wanted to purchase his contract. "They treated me well. They paid me well," Llamosa said.

Negotiations fell through when Colmena asked for too much money. The loan expired. Colmena said it would find another team, but it never did.

"I got my green card and I had four months to travel to the United States or otherwise I'm going to lose the green card," he said. "One month, two months, three months and he [the owner] never found a team. I decided to move to the U.S."

That meant making the difficult decision to give up soccer. He decided to attend college. In 1991, the professional soccer landscape in the U.S. was barren - seven years after the North American Soccer League went belly-up and five years before Major League Soccer kicked off.

"That was a sad moment and decision," Llamosa said. "For me to make that decision to move to the U.S. was basically saying goodbye to soccer. That was something that had to be done.”

While Llamosa received partial scholarship offers from Southern Connecticut State (with the help of former Mexico national coach Juan Carlos Osorio) and had strong interest from Long Island University (with the help of head coach Arnie Ramirez), it wasn't enough to pay the entire way.

So, Llamosa went to Plan C: make enough money to attend college. He worked as a janitor at the World Trade Center. In fact, he employed there on Feb. 26, 1993, a day that ended in tragedy. 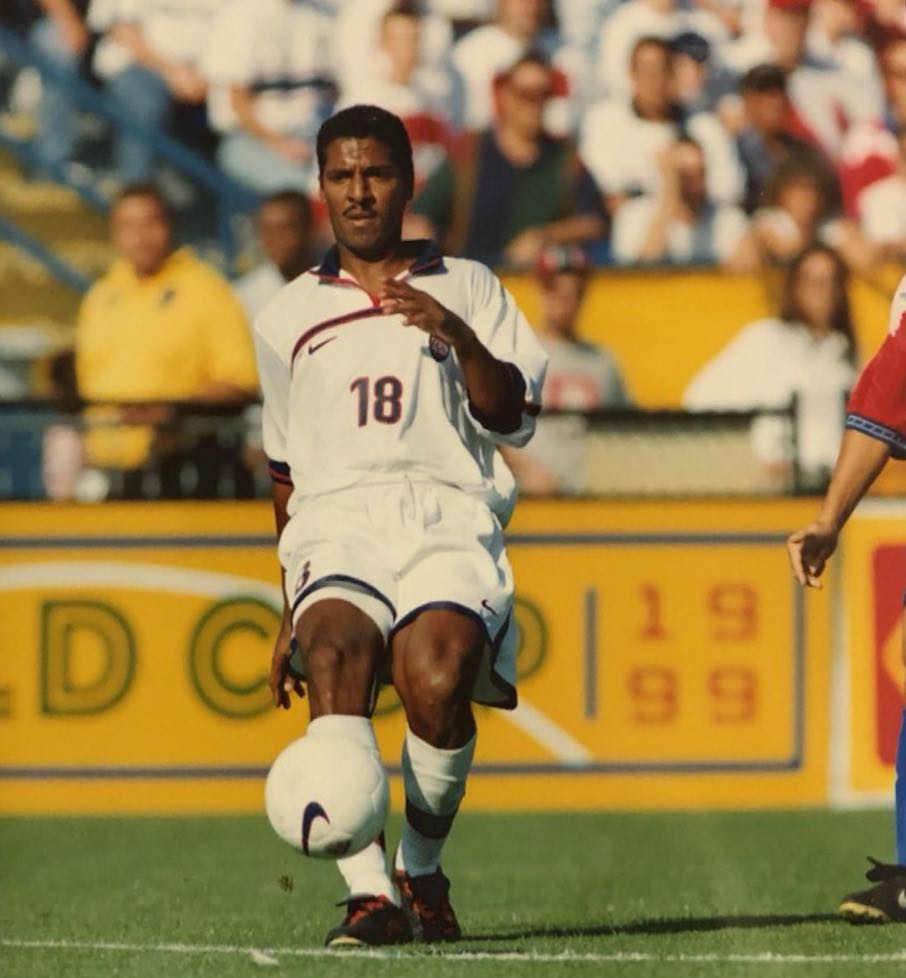 On Fridays, workers received their paychecks and got an extra half hour at lunch to go to the bank. Llamosa made a life-changing decision to eat lunch in a Chinese restaurant with his co-workers. No one has to remind Llamosa that he is lucky to be alive because during that window, the building and his basement office were bombed by terrorists.

Llamosa said he was "very fortunate, grateful with God."

"A lot of people in the building, around the building were on the same page," he said. "That's why there weren't too many casualties that day."

Though he toiled in Manhattan during the week, Llamosa played in semi-pro leagues in Flushing Meadow Corona Park in Queens on Sundays. 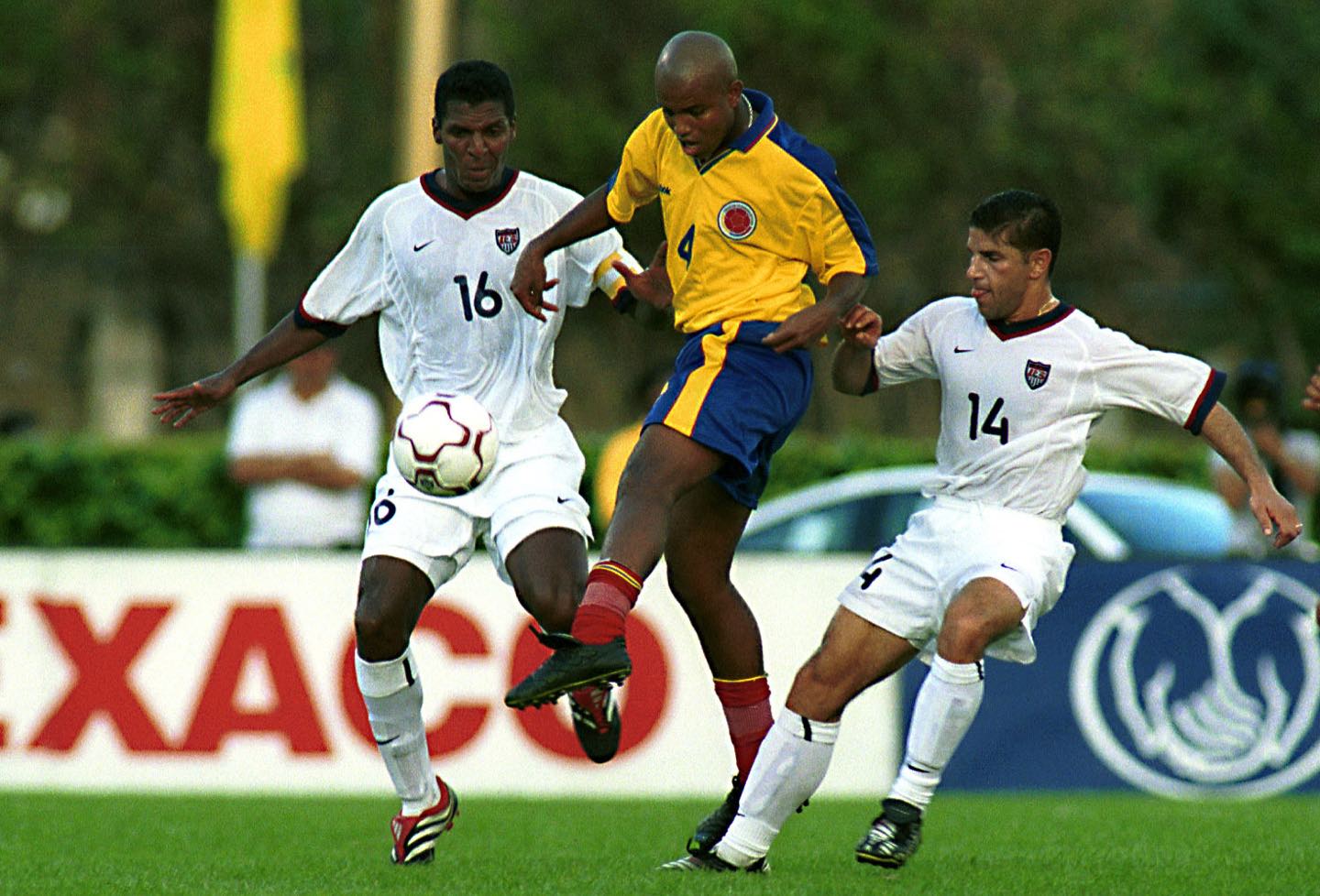 Llamosa impressed at an MLS tryout and was offered a contract, which he rejected. He was married and had a child on its way.

"A lot of the decisions you have to make for the best of the family," he said. "They didn't tell me, 'OK, you're going to play for a New York team.' In the draft you might go to LA. The money isn't enough to be in LA with a family. If you're lucky you might go to a less expensive city."

In 1996, Llamosa performed with the New York Fever, formerly Centaurs, enhancing his reputation. He won team MVP, was named to the A-League Best XI and runner-up for defender of the year. He got a better offer from D.C. United, which had the last pick in the 1997 supplemental draft and traded up to selected him.

"They had Eddie Pope and Jeff Agoos at center back, who were National Team players," Llamosa said. "My agent asked me: 'Do you think it's a good idea going to D.C.? They already have two center backs who were National Team players. It's going to be tough for you to play.' I said, no, I want to be on the best team. The bigger the challenge, the bigger the reward. I don't want to be on a team where I would probably be a starter but not on a strong team. I want to be on a team that will compete for the cup.

"I knew I had a big challenge because most of the guys played for national teams. Every day I had to compete to get minutes on the field. I pushed myself to work hard, be disciplined, and get a starting position."

Llamosa's talents did not go unnoticed by Steve Sampson, who coached the U.S. squad at the 1998 FIFA World Cup, and United coach Bruce Arena, who became USMNT coach later that year.

The 5-11. 166-lb. defender already had applied for U.S. citizenship. Had the stars aligned and his paperwork not been delayed by governmental red tape and incompetence, Llamosa might have been a member of the France '98 squad. In March 1998, Sampson asked Llamosa if he wanted to play for the United States. Llamosa’s citizenship papers needed to be rushed because Sampson wanted to see how he fit into the squad by the final warm-up game against Kuwait on May 24.

Llamosa got a world-class run-around by the U.S. government. He missed United training to fly up to an Immigration and Naturalization Office in New York City. MLS, based in Los Angeles at the time, had a lawyer advising Llamosa. At 8 a.m., he was told he needed to talk to his attorney, but it was 5 a.m. in LA.

"That was a waste of time because everything was far away from each other," Llamosa said. "They said, 'Since you live in Virginia, your file must be in Virginia.' I went to a federal building there. 'No, your file is not here. It must be in New York.' I said, 'I went to New York to Federal Plaza in Manhattan. 'No, it’s the Federal Plaza on Long Island.' Time started going, going, going. I was so anxious. I was thinking that this was my only chance to play for the National Team and have an opportunity compete in a World Cup. The Kuwait game came. No citizenship, no World Cup."

Llamosa was advised by an INS official to restart the process with a new picture, fingerprints and paperwork.

Only 14 days after becoming a citizen, Llamosa made his USMNT debut at the "ancient" age of 29, in Arena's first game as coach. He lined up alongside D.C. teammates Pope and Agoos in an international friendly against Australia in San Jose, Calif. on Nov. 6, 1998.

"I had a lot of emotions. [Hearing] the U.S. national anthem, I was so proud, making my family, friends and basically another country proud. People in Colombia who knew me, they saw me playing for the U.S"
Carlos Llamosa on his USMNT Debut, Nov. 6, 1998 vs. Australia

“In that game I took a bullet for the team. I got a red card." 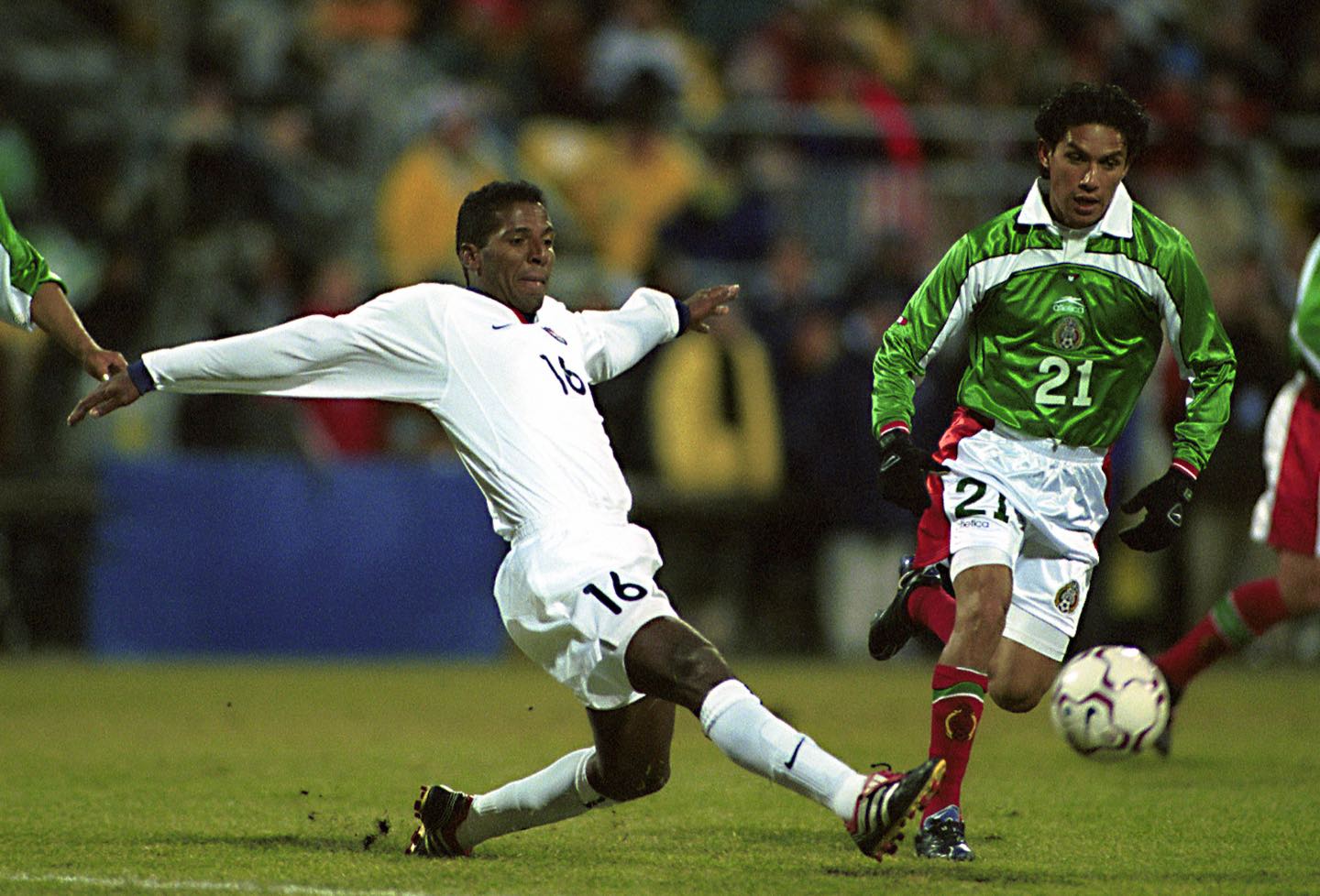 Llamosa laughed, recounting what transpired. In the fourth minute of stoppage time of a scoreless draw, Australia counterattacked off a U.S. corner kick. Left wingback Simon Colosimo was on a breakaway and Llamosa tackled him.

"They didn't score at least," he said. "I didn't want my first cap to be a loss. I got the red card. They got the free kick. Game over."
While he could collect many jerseys from opponents throughout his career, there was no shirt trading that day.

"I promised that jersey to my dad, the guy who was behind me," he said. "There were a lot of people were behind me, but he supported me, a guy who was there for me. I sent my jersey the next morning to Colombia. Every time the U.S. played, he wore that jersey."

Llamosa made 29 appearances for the USA, including nine qualifiers for the 2002 FIFA World Cup. The veteran defender played a reserve role in Korea, coming off the bench to help ensure USMNT victories against Portugal in the opening match and Mexico in the Round of 16 – a game that turned out to be his final cap. 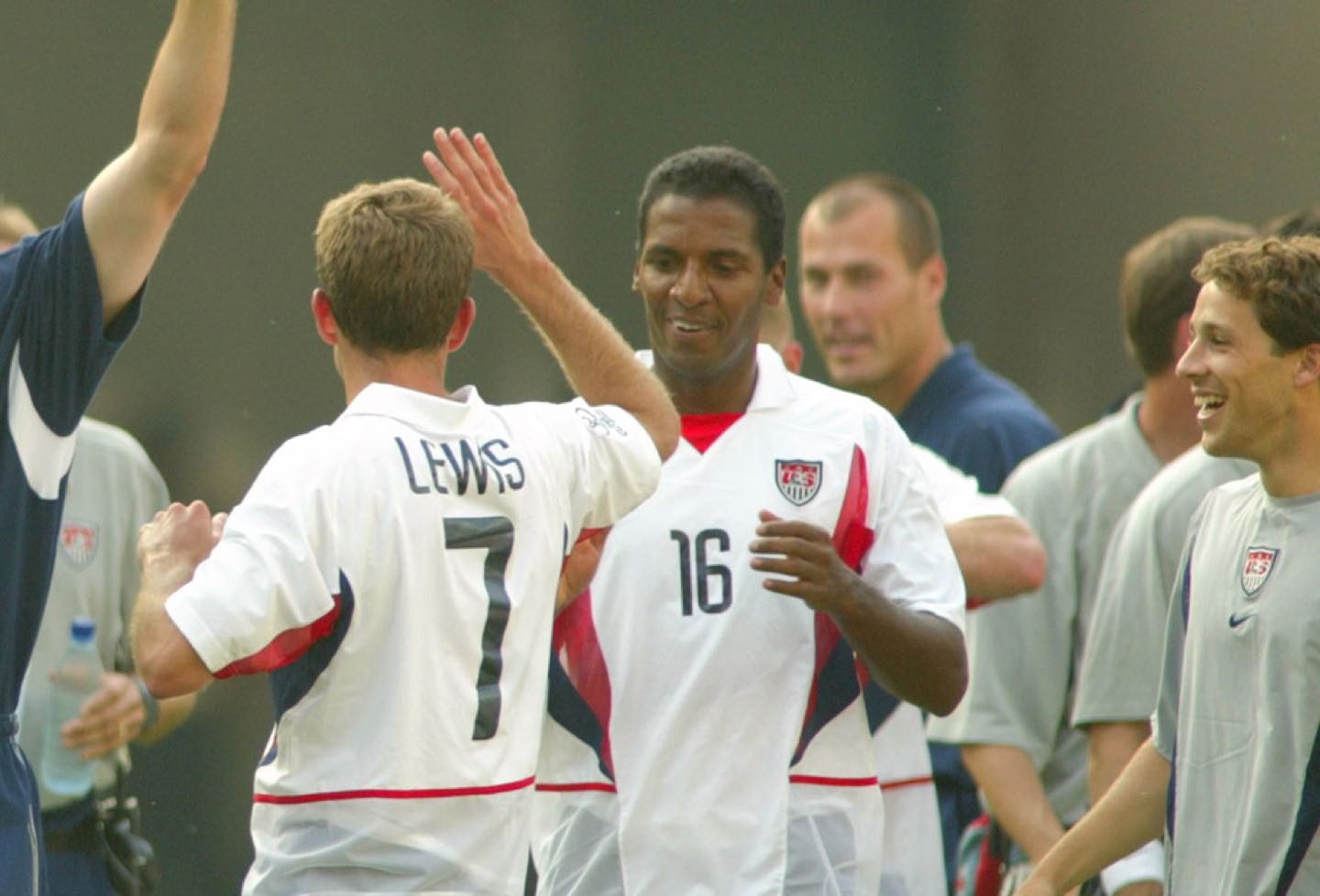 He played a part in the USA’s third-place finish at the 1999 FIFA Confederations Cup and proudly captained the team in a friendly against his native Colombia on Feb. 3, 2001 in Miami.

After moving on from D.C. United, he took on a vital role in the Miami Fusion, winning the 2001 MLS Supporters' Shield before completing his career with the New England Revolution and Chivas USA.

Since 2018, Llamosa has been head coach Giovanni Savarese's first lieutenant with the Portland Timbers. He has been Savarese's assistant coach and confidant for seven of the past eight years, including three NASL championships in five years with the New York Cosmos. 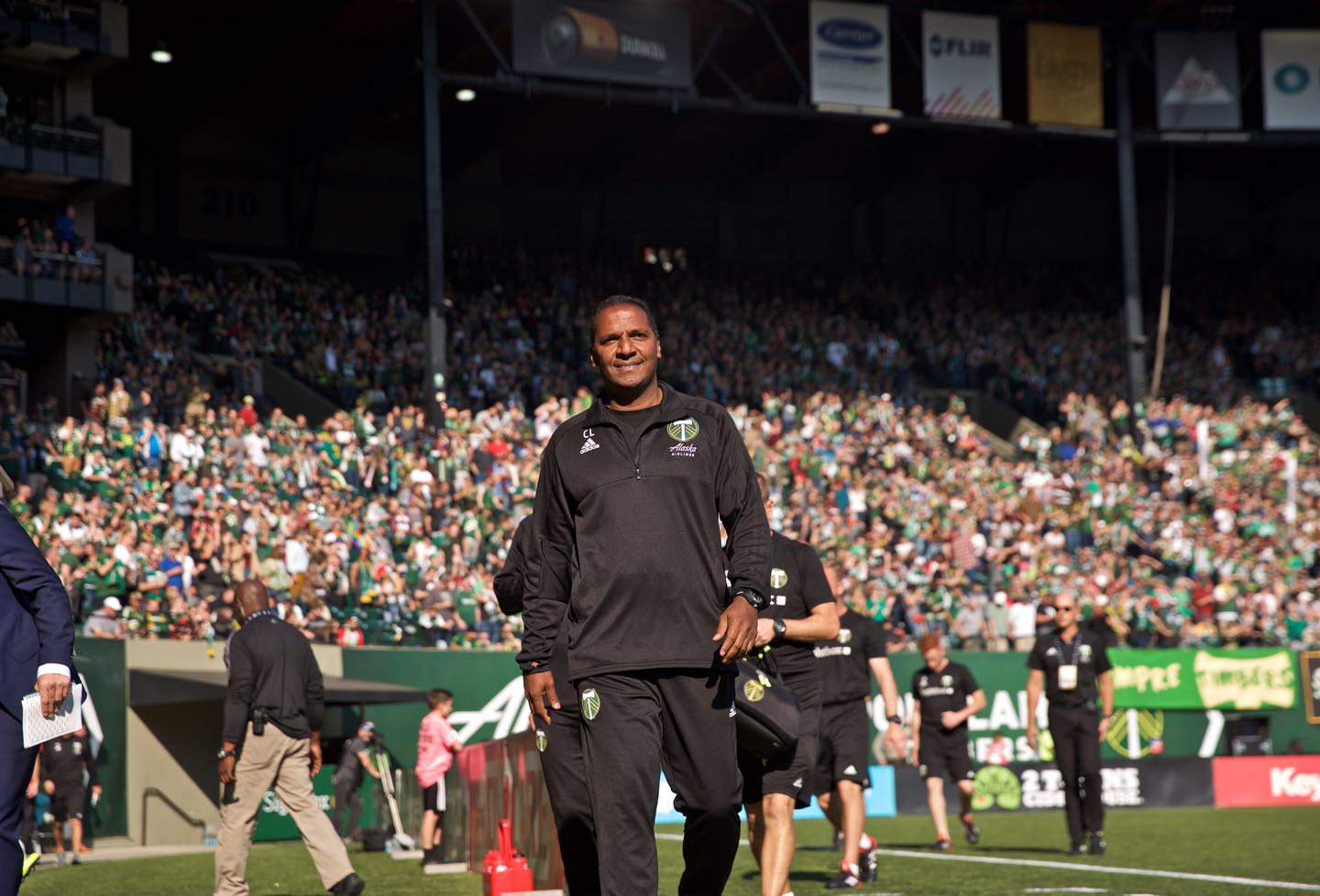 Courtesy Portland Timbers
"More than a coach and assistant coach, we are good friends, honest friends,” Llamosa said. “On a coaching staff that's really important to trust each other. Not only me, but the other coaches, the keeper coach, the fitness coach, to have trust in each other. If I disagree or agree with something, I express my opinion. We try to run this group like a family.

"We have to trust each other. That's the message we pass to the team, to the players. You have to be a united team."