One Nation, One Team, One Staff

Remaining patient and productive in the midst of a pandemic is a difficult task for anyone, especially young players eager to return to normalcy and get back on the field. So how to keep Youth National Team players engaged during the COVID-19 pandemic, which has removed them from their team environments, has been a huge challenge for U.S. Soccer, but also one embraced by the U.S. Women’s National Team technical staff.

Emotional support and regular communication have been keys to keeping the players mentally and physically locked in during the most unusual times in their young lives, and part of that has involved virtual interaction not only with their age group coaches but also with the man at the top of the pyramid, U.S. Women’s National Team head coach Vlatko Andonovski. 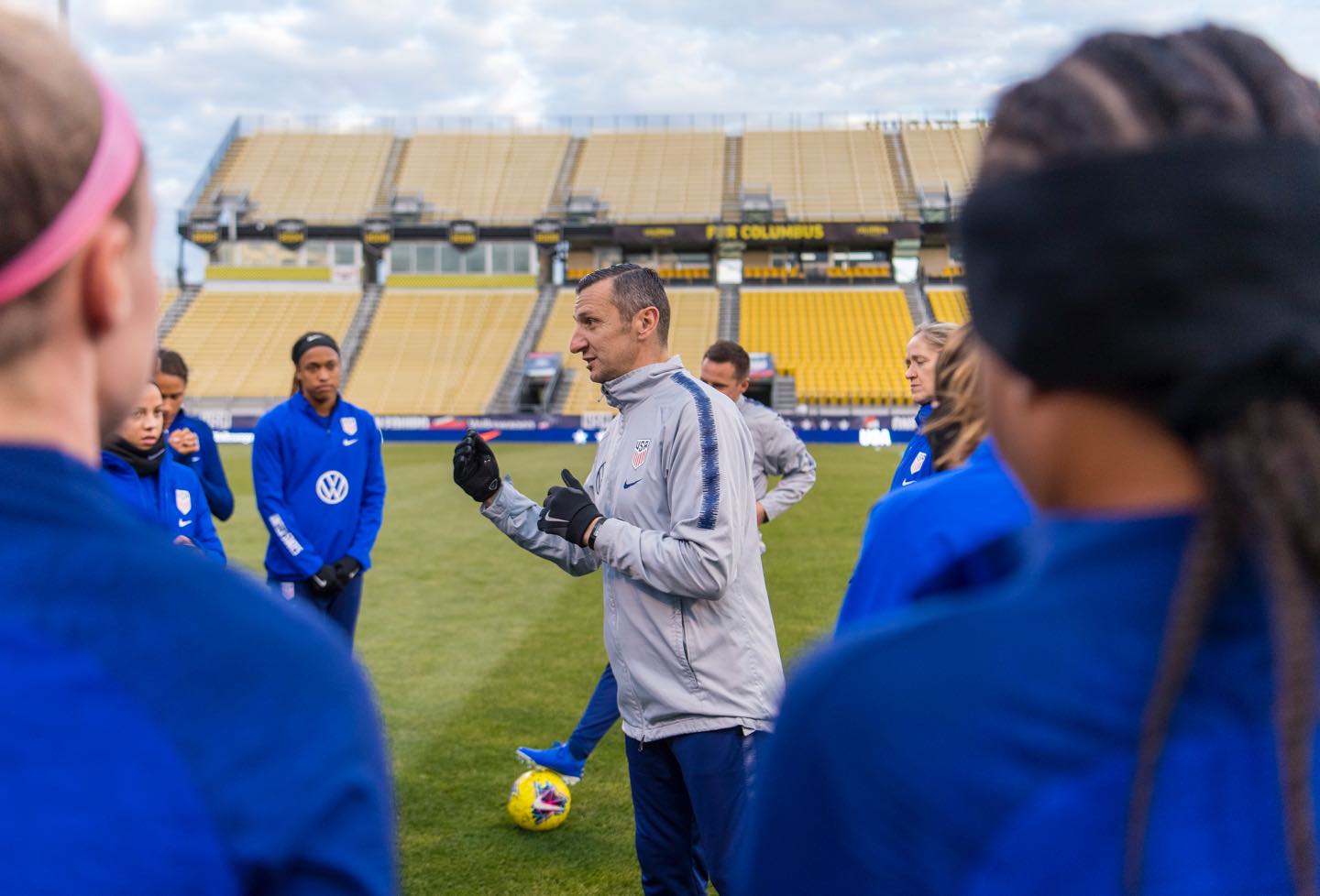 USWNT Head Coach Vlatko Andonovski and his staff have used technology to remain aligned across all age groups during the COVID-19 pandemic.

From the moment Andonovski came on board in October of 2019, he’s shown his dedication to the Youth National Teams and stressed the importance of cohesion between all age levels in the U.S. Soccer system. Being aligned with the age group coaches along the player pathway is vitally important to Andonovski, a notion he encapsulated in the phrase “One Nation. One Team. One Staff.” He holds weekly meetings with all of his assistant coaches and the Youth National Team coaches, while also aligning with U.S. Soccer’s Talent ID department. To that end, while of course keeping the communication flowing with the USWNT players, he’s also made a concerted effort to help inspire and encourage the U.S. YNT players. This has been done through video sessions with the U-14 Girls’ National Team, the U-15 and U-16 GNTs and the U-17 Women’s National Team. Further sessions with the older age group teams are being planned for the fall.

The sessions with the U-14 GNT were particularly important for those players, who are entering the National Team programs for the first time through U.S. Soccer’s U-14 Talent ID program. An early introduction to Andonvoski provided motivation and important insights for the players just beginning their National Team journeys.

The goal of becoming a professional is common among the YNT players, but often the detailed information to help one actually get to that level is not readily available. An objective of Andonvoski and the YNT coaches is to bridge that gap.

To that end, the YNT players for the younger age groups were given something that has become very familiar as of late: a bit of virtual homework. About 200 player pathway assignments were turned in by YNT pool players to their respective coaches, in which the youth players detailed the journey of current USWNT players and examined the skills and attributes that played a role in their success. The goal of the assignment is to enhance awareness among youth players about what is needed to pursue elite performance. 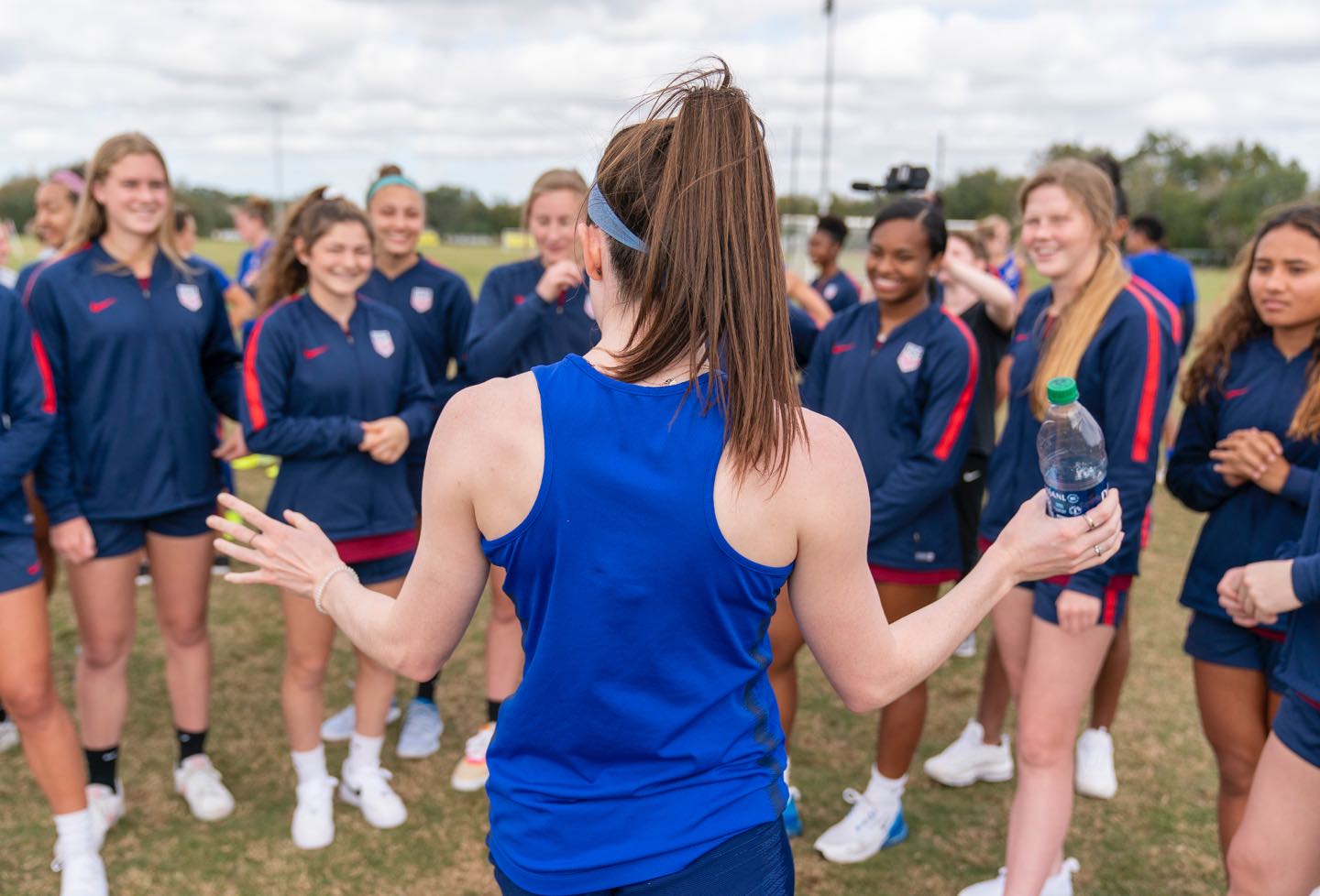 USWNT midfielder Rose Lavelle speaks to members of the Under-17 USWNT during a training camp in January 2020.

Andonovski took time to look at them all and using themes he saw from those assignments, designed his talks with the young players while also making himself available for questions at the end of the sessions.


He talked to the young players about how the high-profile USWNT is just the tip of the iceberg, but the work that’s done to get there is often unseen, much like the majority of that submerged hunk of ice. He spoke of how much time and work it takes to reach the global stage but also of the qualities – mental and physical – that are common to the players who do make it to the top.

Players from the USWNT have also lent their voices to inspiring the next generation and the U-17 WNT was treated to a virtual chat with women’s soccer legend Carli Lloyd.


The YNT players have also had the benefit of taking part in position group meetings that brought together players from across the age groups as well as the senior team. The tactical discussions, which were led by Andonvoski with participation from all the senior team and YNT coaches, spanned six position groups: center backs, outside backs, defensive midfielders, attacking midfielders, flank forwards and center forwards. These highly interactive sessions gave the YNT players the unique opportunity to hear directly from the senior team players that play their specific positions, ask them questions, give their own input, and also receive guidance from Andonvoski and his staff, as well as their own age group coaches.


While COVID-19 has created countless challenges, Andonovski, the coaching staffs and YNT players have embraced the opportunity for collaboration and remain focused on building for the future.