“It all happened so fast,” Sergiño Dest said when thinking about his whirlwind transfer to FC Barcelona two weeks ago.

On Thursday, Oct. 1, the 19-year-old fullback was unveiled as the club’s newest signing. About 72 hours later, he became the first American to play a competitive match for the Spanish La Liga giants, coming on to the field to join the likes of Lionel Messi, Sergio Busquets and Gerard Piqué in the 75th minute of the club’s 1-1 draw with Sevilla.

With matches paused for the October international break, the USMNT defender has had a bit more time to catch his breath and reflect on his first few days at the Camp Nou. 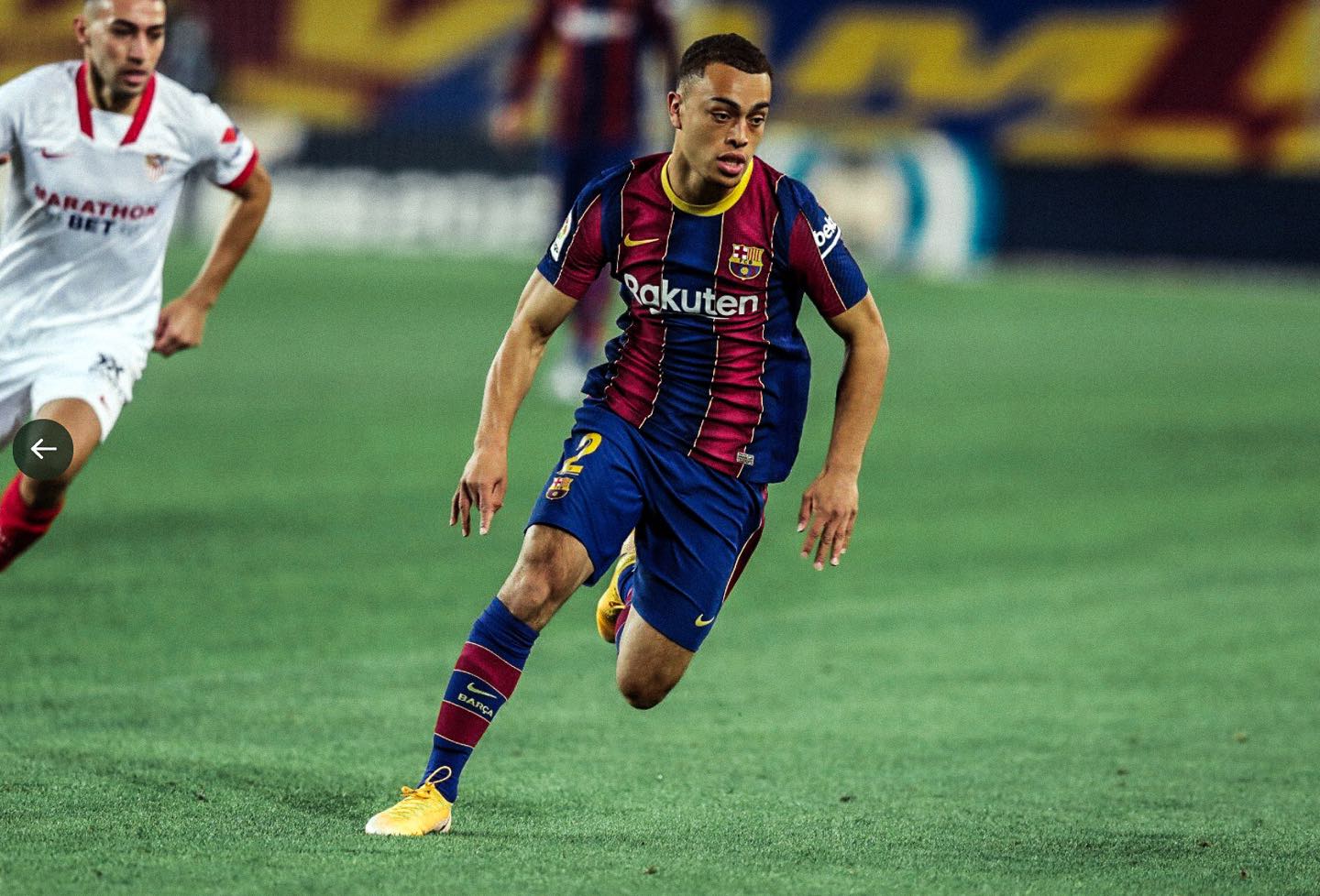 “It felt amazing. The first couple days I didn’t realize that much, but when I look back I said, ‘Wow, I play for Barcelona.’ I’m just realizing right now, seeing all the photos and videos again. It’s an amazing feeling. It was an emotional moment for me when I came on.”

Now more settled, he’s hungry to become a mainstay with one of the powers of world football. He’s also pumped about being one of the flag bearers among a number of young Americans making inroads with big clubs in Europe, and what that could mean for the U.S. Men’s National Team in the coming years.

“I think everybody feels the excitement. I think because we have more players that play for big clubs, that’s the reason everybody is excited that we can really achieve something in the World Cup. Everybody has to keep motivated and hungry. I feel like we can do it. If we just work hard and work as a team, everything can be achieved. I’m also really excited to see how the team is in the next few years.”

It’s not like Dest wasn’t already playing in a big environment.  A product of the famed Ajax Academy, the defender rose through the ranks and made his first-team debut for Holland’s biggest club at age 18 last July.

Still in his teens and with just one season in the Eredivisie under his belt, it would have been completely normal for him to stay with Ajax for another year, but big clubs came calling.


The reigning German and European champions Bayern Munich appeared to be the frontrunners for a while, but when interest came from Barcelona his focus shifted to a club he had always dreamed of representing -- one where he could be further challenged.

“I felt that I like challenges, so if I’m going to this club, I will develop because I see what I have to improve on the most. It’s just a big challenge for me, and it just keeps motivating me to develop myself all the time … I dreamed of this all the time. Now I get an opportunity to play for such a big club like this, so I should take it and try. I think I can learn a lot of things from all those players. The best player in the world is here – Messi – and I can learn a lot from them.”

And in an interesting twist, Ronald Koeman – formerly the Netherlands manager who tried to convince Dest to play for his National Team just last fall – finally secured his services, now as the manager at Camp Nou. 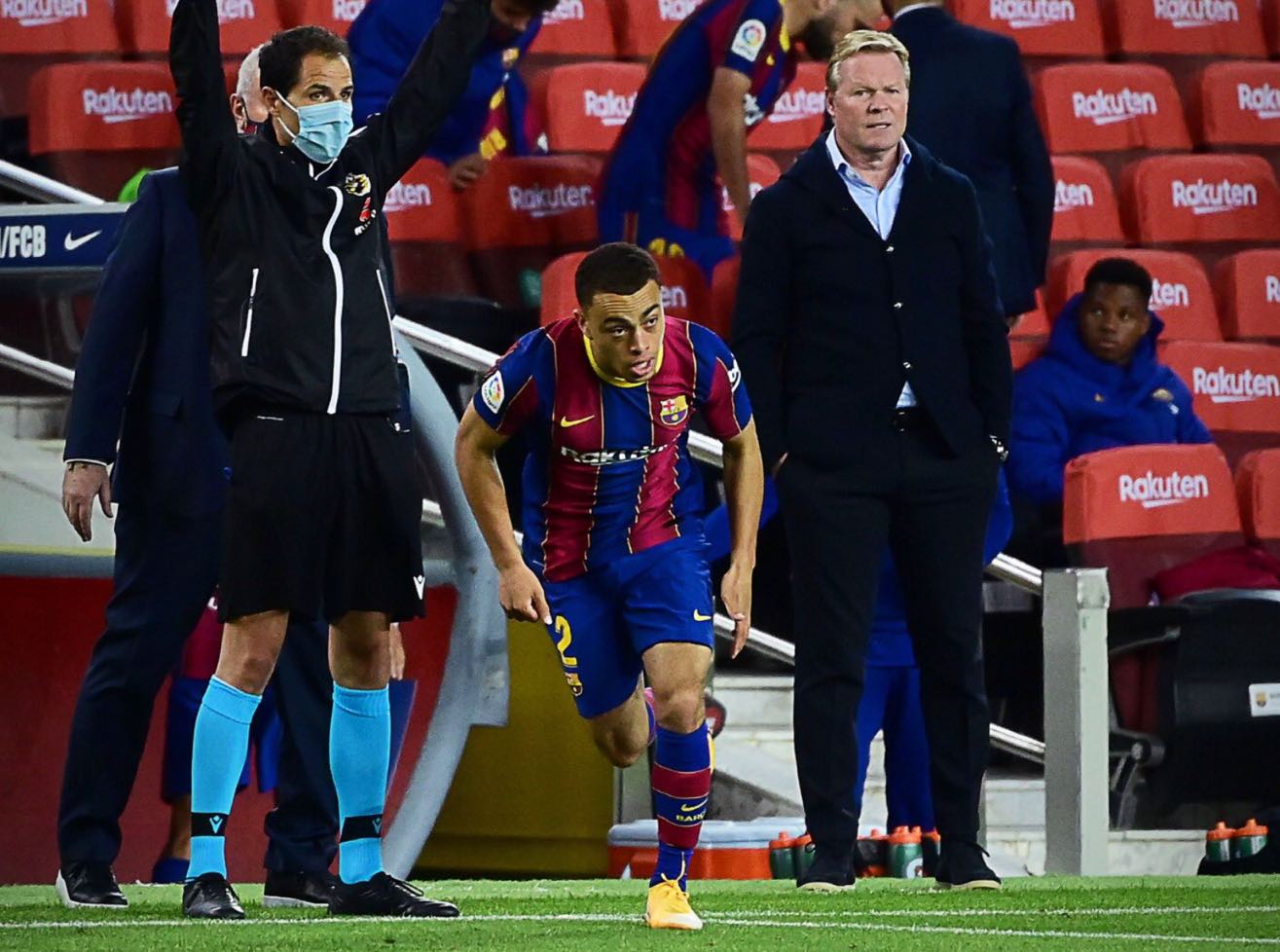 “In the time that I had to choose between the Netherlands and the USA, I just told him honestly that I didn’t want to play for the Netherlands, and I wanted to continue playing for the U.S. National Team. It’s not his fault. We just kept a good relationship. After a while he called my agent and asked me if there was a chance that I could still play here. I was definitely willing to play in this beautiful club. When we met the first time after that, it felt natural.”

And just as he did last fall when he was making his National Team choice, Dest also conferred with USMNT head coach Gregg Berhalter – who spent the first six years of his professional career in Holland -- about the decision he had to make between the giants of Catalunya and Bavaria.

“He was really happy for me to have the opportunity to go to such big clubs and he said to just keep working on yourself. It’s not like when you go to a big club you stop working. You have to keep developing yourself. That also motivates me. I really like that he’s talked a lot with me and helping me to make the right decisions on and off the pitch.” 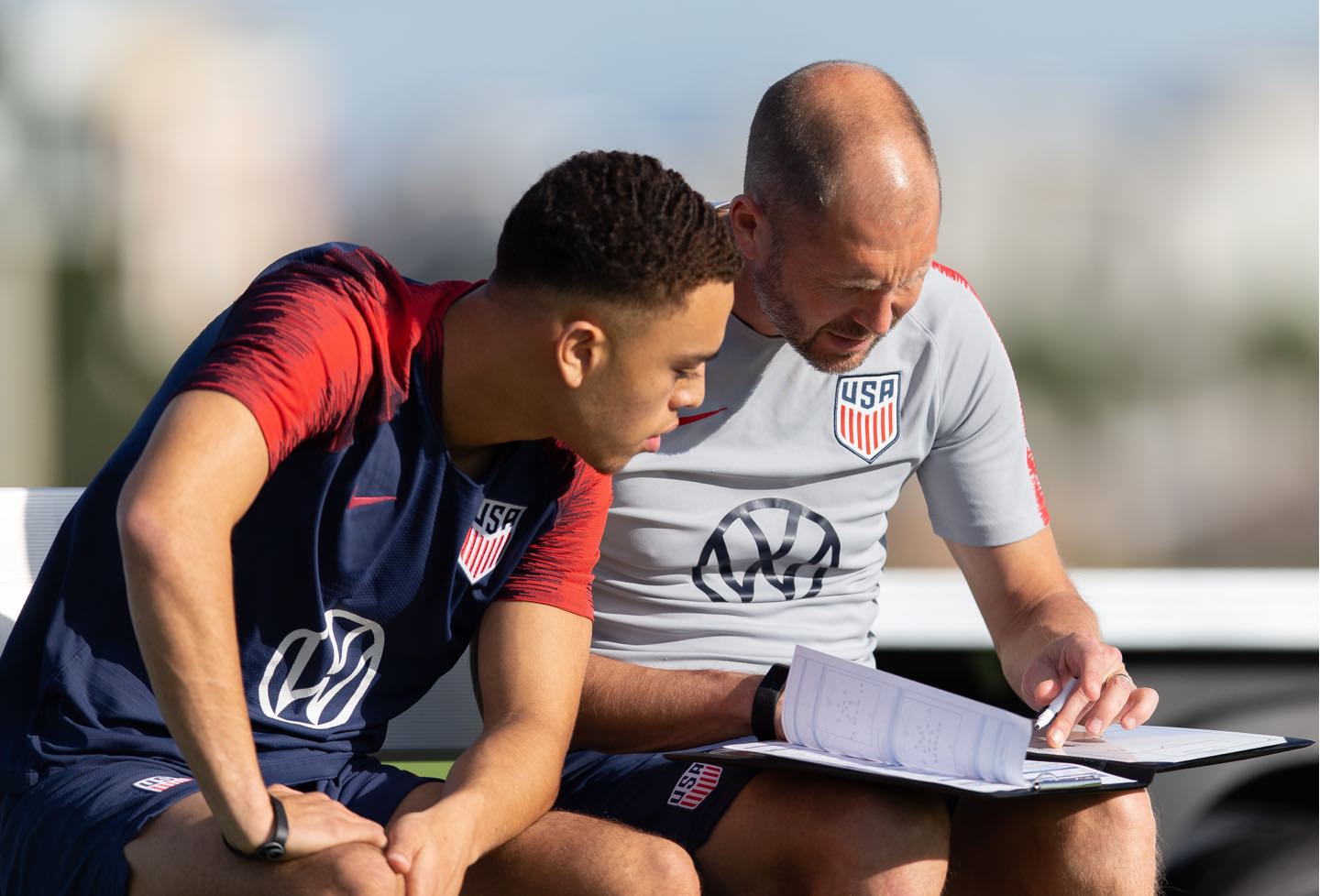 Forever with the tag as the first American to play for Barcelona, Dest has more he wants to achieve at the Camp Nou.

“I don’t feel pressure in a bad way. I feel it in a good way. I’m the first American to be in the selection of Barcelona, so I’m really proud of that. Right now, I just want to make something great. I don’t want to be the first one, but I want to be the first one that actually does something great at this club. I’ve worked really hard for this and I want to achieve big things in this club.”

Due to the COVID-19 pandemic, it’s been 11 months since Sergiño Dest and many of his teammates last represented the United States. While it’s mostly been a lost year on the field for the USMNT, it hasn’t kept the player pool from continuing to developing a bond off the field.

At the start of the pandemic, the USMNT coaching staff launched a WhatsApp group for them to stay in close contact with the player pool as they’re spread out across the world. While camps and competing in the Concacaf Nations League and World Cup Qualifying would have been the preference this year, Dest says the extra communication has been helpful for the group. 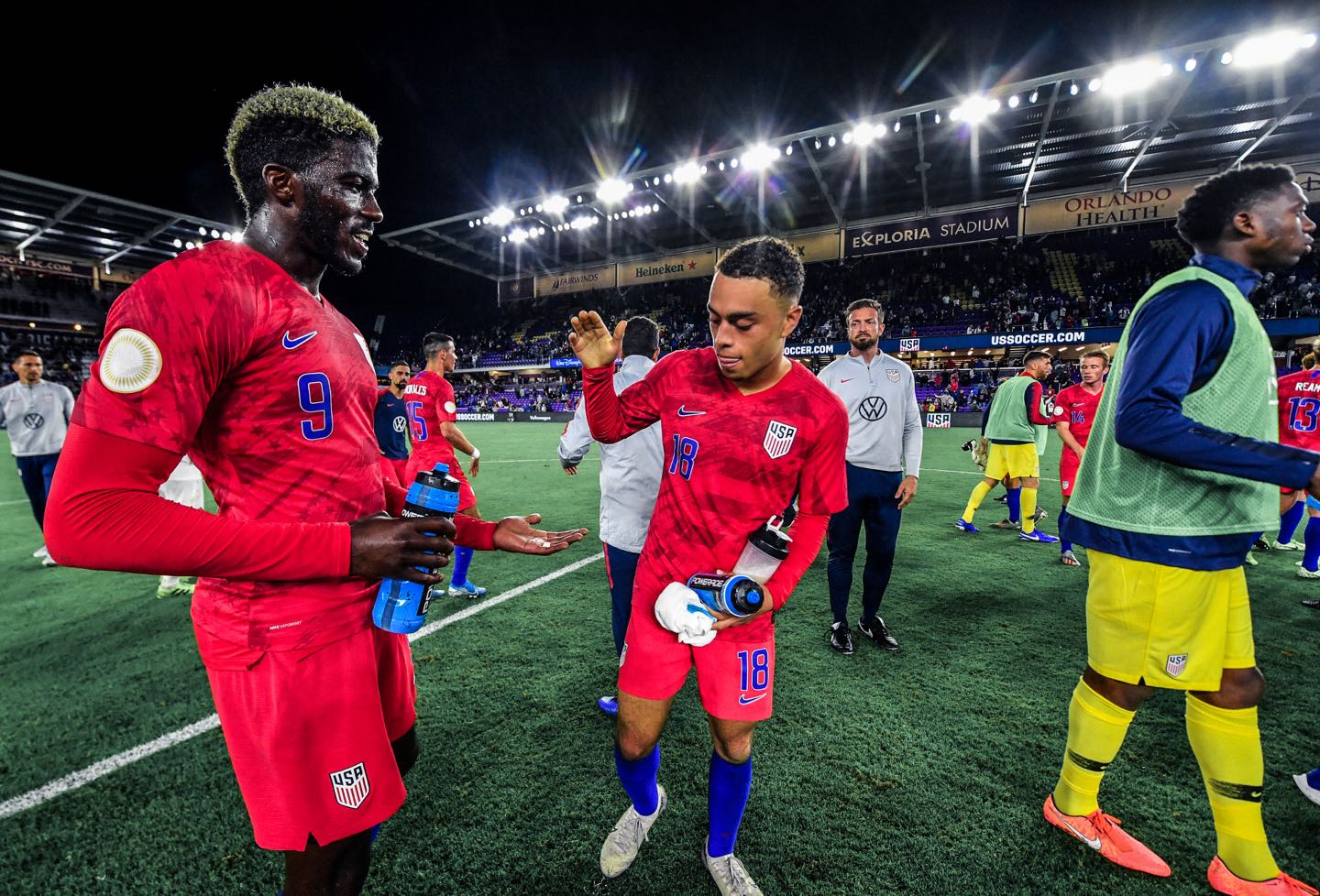 “Every week we talk in that group chat, we talk about new things, personal things. The coach, Gregg Berhalter is always there for us. If you want to ask something about the team, the philosophy, the roster – he will tell you everything. He stays busy with us. I really like and appreciate that.”

And while the end of the year is creeping closer, there are strong indications that the U.S. team will get together at least once more before the calendar turns to 2021. After a variety of factors forced the decision to forego a camp in the U.S. with all domestic players, the USMNT has its sights set on two matches in Europe during the FIFA window next month. 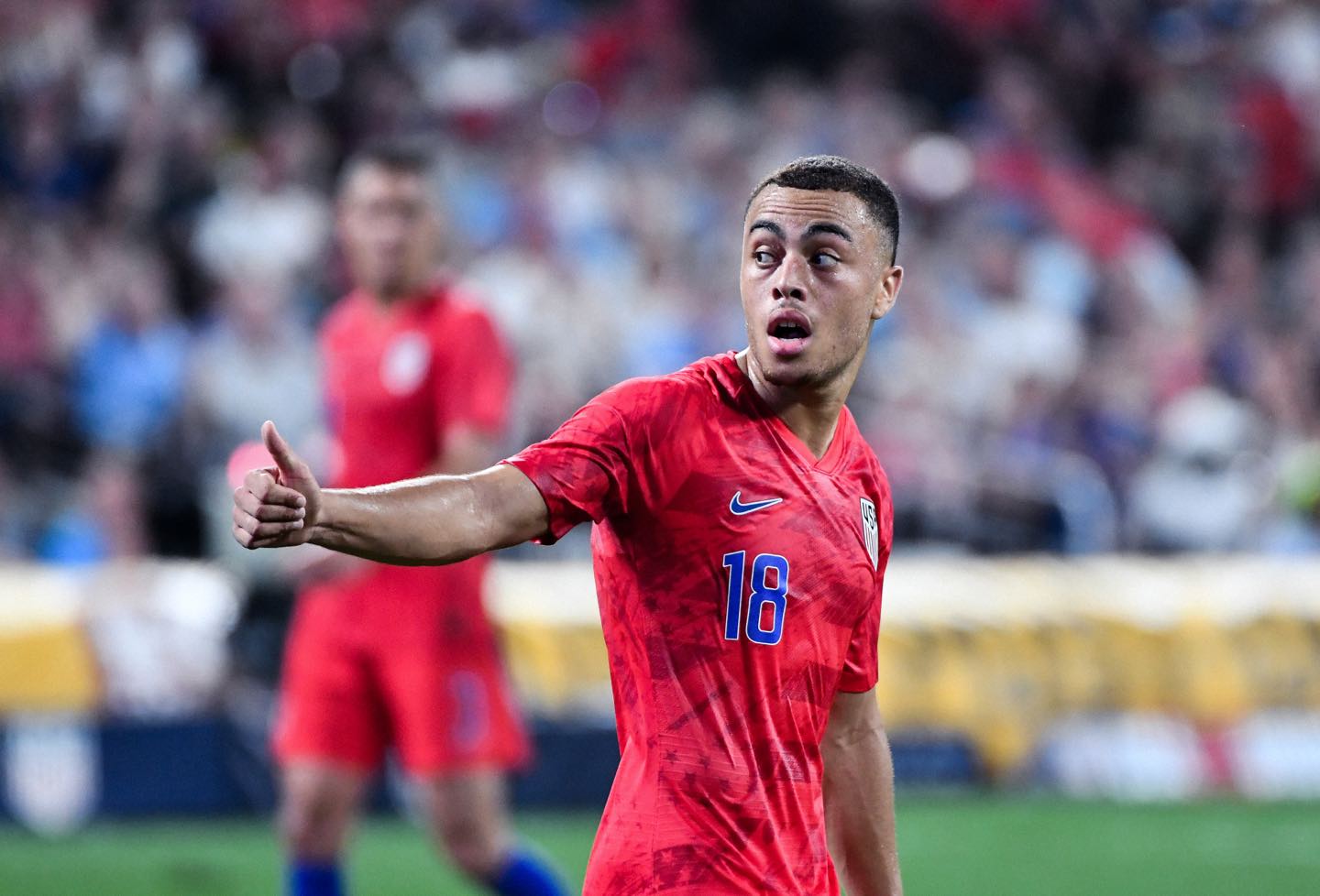 By that time, a year will have passed since Dest played internationally, but with his club future settled just like his national team future was this time last year, the full back is raring to get back on the field with his teammates. When he does, the renewed purpose of building for qualification to the 2022 FIFA World Cup and even hosting the 2026 tournament on home soil will be all the motivation the group needs.

“That will be amazing to play for the National Team again after such a long time. We are all looking forward to that camp.”

“We haven’t achieved really big things with the U.S. team yet, so everybody wants to be the first one. That’s why everybody is so motivated to develop themselves and win the first big trophy for the country.”