Zack Steffen’s Growth at Manchester City, Leadership in the USMNT

A little over two years into his USMNT tenure, Steffen is one of the most experienced players on the current roster
Michael LewisNovember 11 2020
Featured

Playing for Manchester City can be a double-edged sword.

The English Premier League powerhouse boasts some of the world’s best players. The team is deep and has annual aspirations for domestic and international glory. Not earning at least one major trophy a year is considered a disaster.

U.S. Men's National Team goalkeeper Zack Steffen has learned to make the best out of a difficult situation at Man City, even though the 25-year-old rarely has seen action this season. 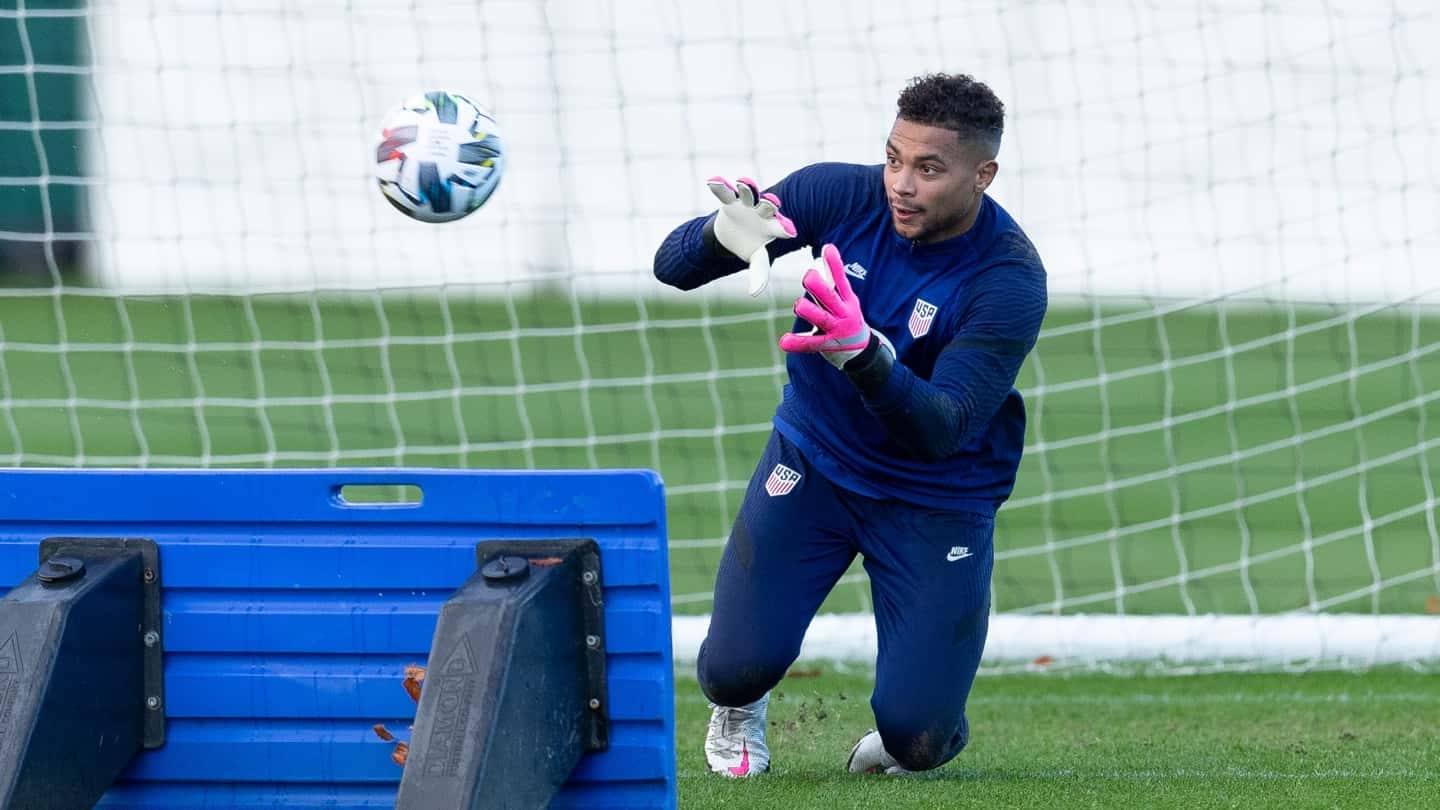 The training ground has become his proving ground as Steffen builds on his game and tries to impress upon manager Pep Guardiola and his staff that he should be guarding the goal instead of Brazil international Ederson.

"Manchester City is one of the best teams in the world, and the talent that we have has already made me a better keeper," said Steffen, who could get the starting nod for the USMNT when it meets Wales in an international friendly in Swansea on Thursday (2:45 p.m. ET; FS1, UniMás, TUDN). The USMNT then faces Panama on Monday in Wiener Neustadt, Austria (2:45 p.m. ET; FS1, UniMás, TUDN).

"Just to be in training with those guys every day, it's making me better. It's pushing me in ways that I definitely wasn't pushed in the past, at different levels in my career. Just in every aspect it's quicker. faster, more intense it's, sharper. You really have to be focused and dialed in."

"They're just so detailed,” he said. “It's been tough with the COVID. Everybody knows it's a weird year, weird season, but I feel like I've already grown on the field with City.” 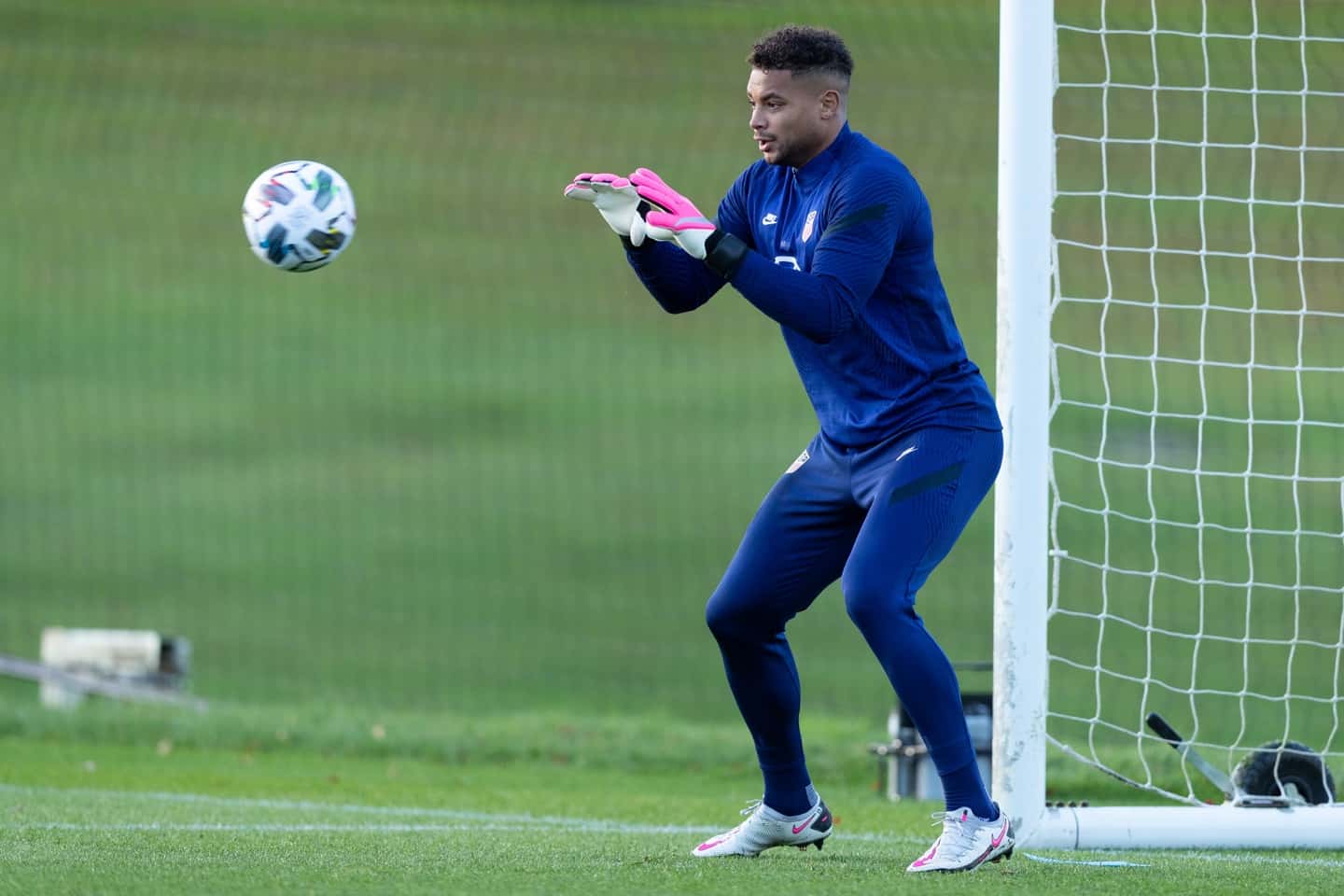 He has learned some new techniques, such as hand positioning when catching the ball or taking a set position on a certain kind of shot.

"I feel like I've sharpened myself in the technical area," Steffen added. "Just watching those guys, being on high alert every training and being in that level, you grow mentally, and you learn the game more."

Twice this season Steffen has started and guarded the net in the English League Cup, backstopping a 2-1 home at AFC Bournemouth on Sept. 21 and then keeping a clean sheet in a 3-0 triumph at Burnley on Sept. 30.

"Getting games week in and week out is most important," he said. "It's what I want. The rest will work itself out, as long as I work hard and continue to trust the process."

Steffen has company in camp, and is he expected to be pushed for the starting spot in Swansea. Ethan Horvath (left), off a standout performance for Club Brugge in the UEFA Champions League last month is on the ground, as is 18-year-old Vancouver Whitecaps academy product Chituru Odunze (right), now working his way up the ranks with Leicester City. 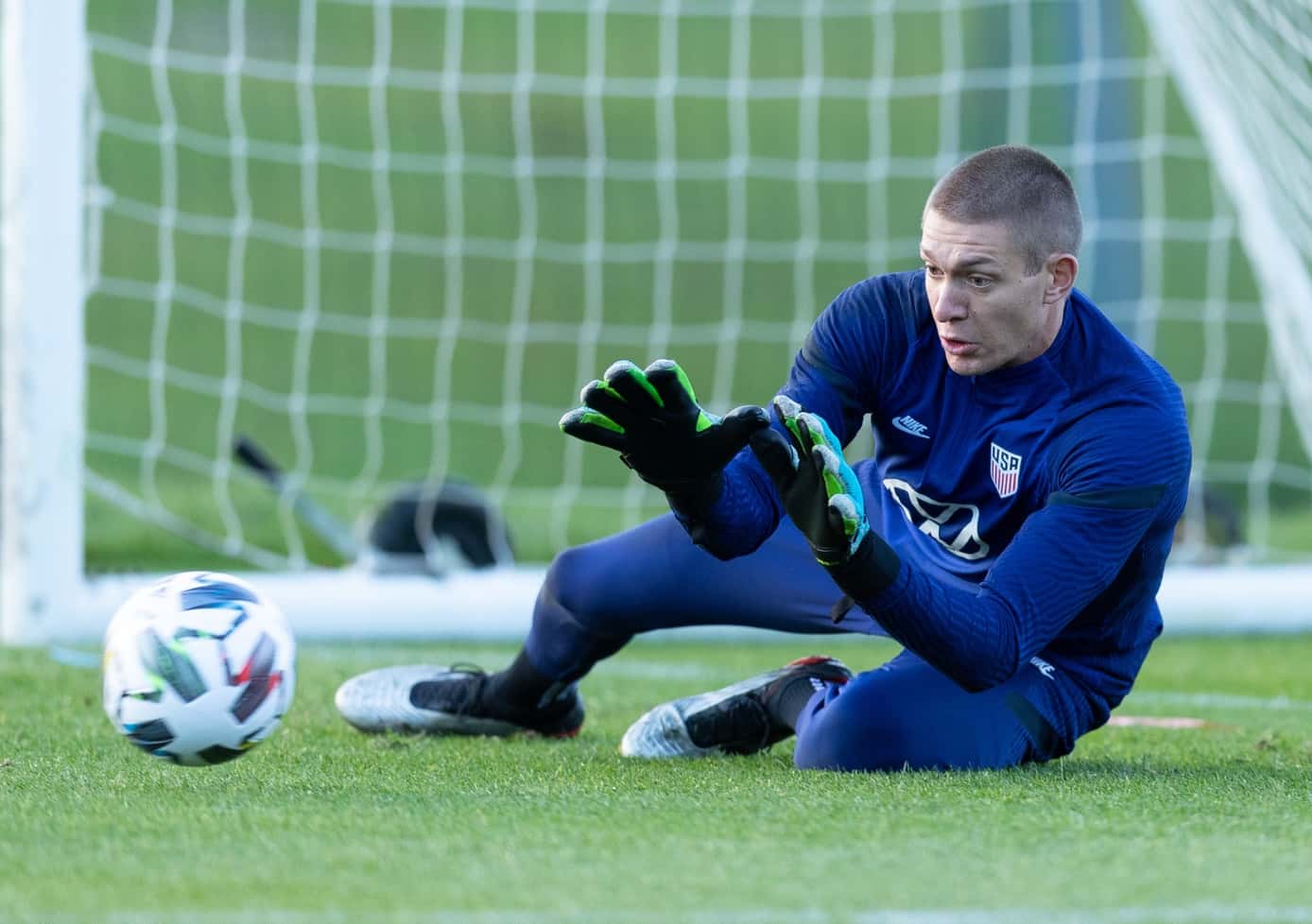 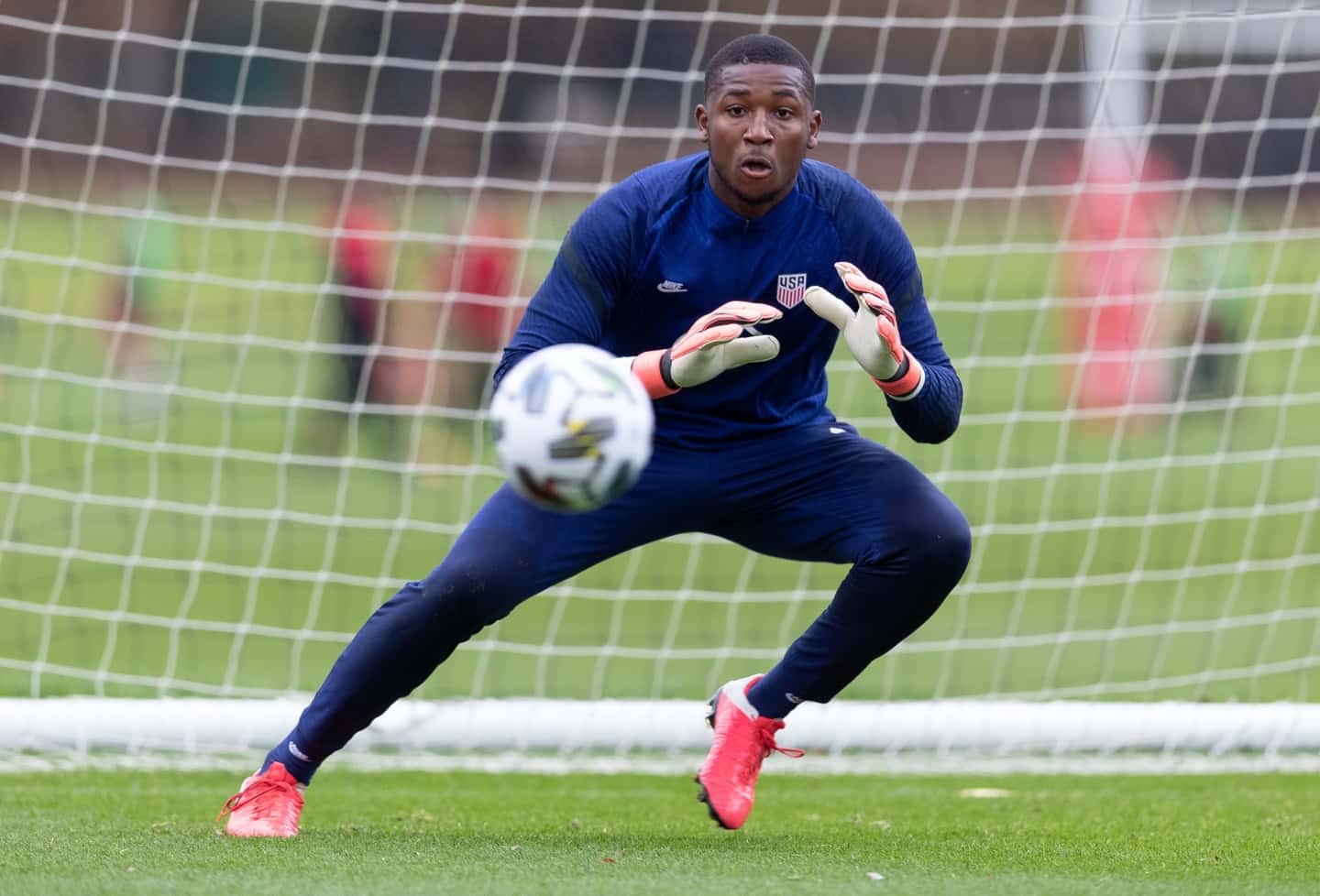 "The U.S. goalkeeping pool, we have a lot of strong goalkeepers," he said. "Each camp, every time we're in training, we push each other. We have a very positive relationship. It's fun, it's intense. It's how it should be."

The former Columbus Crew SC standout has embraced the camp, his first in 13 months.

“It was a long time coming,” he said. “When other national teams are getting together, we lost that time and opportunities. So, this camp is really, really important.”

The November FIFA International window and COVID-19 pandemic haven’t given the USMNT much wiggle room. Head coach Gregg Berhalter didn’t have a full squad to train until Tuesday due to arrivals and testing protocols.

“It's tough in such a short amount of time to get so many new faces together on the same page. We just have to show what our beliefs are,” Steffen said. “We want to show what kind of team we want to be. That's just going out there and working hard for each other, supporting one another and taking it to other teams.” 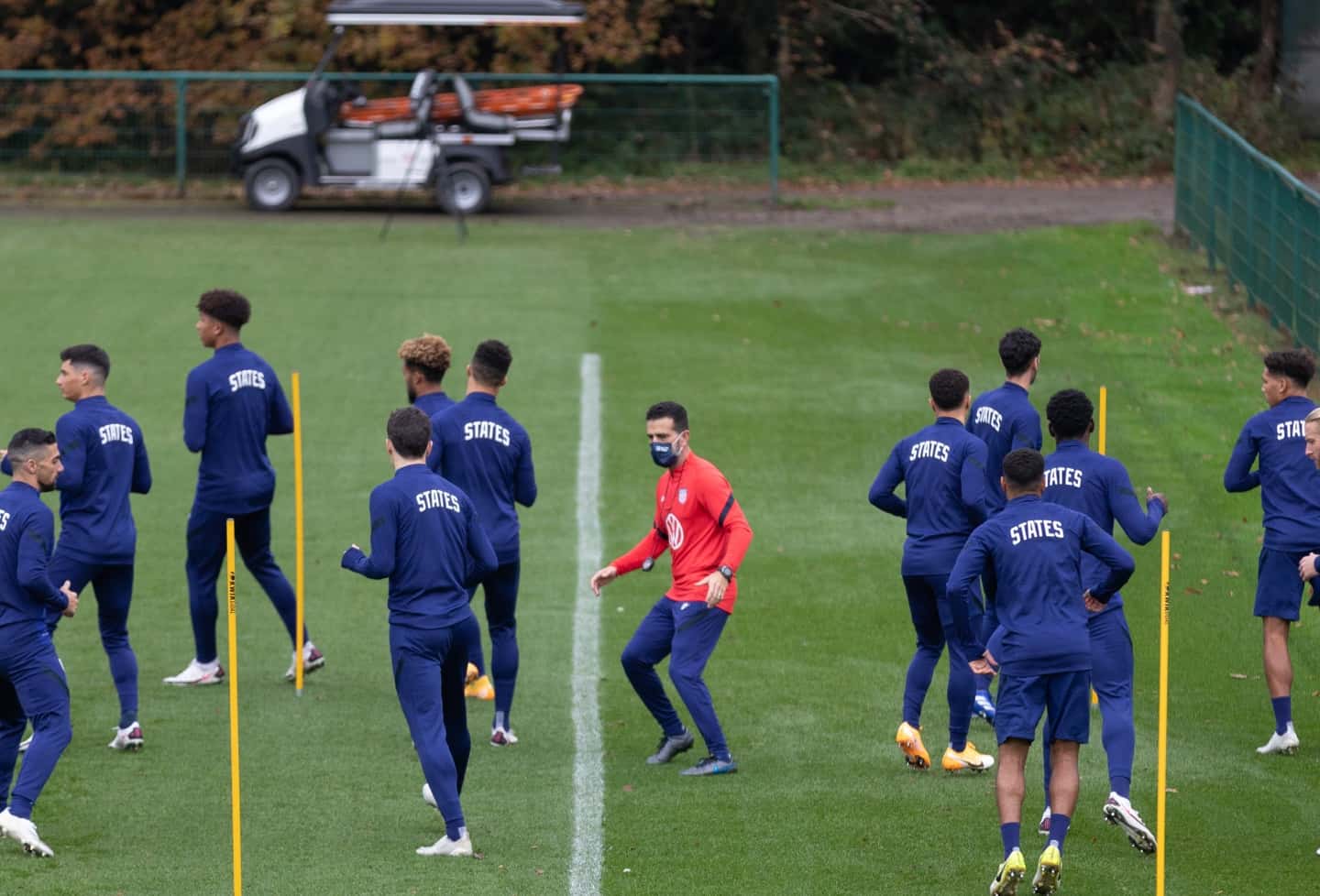 Despite the short window, the 6-foot-3, 190-lb. Steffen has liked the camp's vibe. "Training has been, short, sharp and quick,” he said.

After not reaching the 2018 FIFA World Cup, and with a number of young players featuring for major European clubs, there are high expectations of the USMNT qualifying for Qatar 2022.

"America as a whole has expectations, we have high expectations for ourselves," Steffen said. "That's just how the mentality has to be to reach the levels that we want to reach. We just shut out the outside noise.”

With a squad that has 13 players age 20 and under and an average of nine caps, the 25-year-old ‘keeper’s 17 caps make him a wily veteran and place an automatic leadership role on him.

"Just being a goalkeeper, my role is being a leader, being that voice on the field," he said. "I'm trying to get to know these guys as much as possible. We don't have a lot of time to get to know what they're about, welcome them into the team, into the family, making sure that they feel comfortable to come to me or anybody about anything. Just letting them know that there's a certain standard that comes along with being a part of this team. We have a really good group of young guys. They're willing to work, learn and push themselves to get better."

In a rare and intriguing meeting of U.S. internationals last week, Steffen sat down for coffee with U.S. Women’s National Team standout midfielder Sam Mewis, who scored in Man City's 3-1 victory over Everton in the Women’s FA Cup final at Wembley on Nov. 1.

"We just caught up and really just chatted about Manchester life, the teams, a little bit of national team," Steffen said. "A little bit of Voycenow since she's been a big part of that with me. She's awesome.”

Voycenow is Steffen's non-profit foundation that helps families in need.

"So that'll be nice to get to know her husband. She’s got a cute dog. Just good vibes, good people. That's what I like around me. I'm really looking forward to continuing that relationship."

And perhaps getting some time in goal this week