CHICAGO (Dec. 19, 2020) – In a year in which she shone brightly in the limited U.S. Women’s National Team schedule while also performing at an extremely high level for clubs in the USA and England, midfielder Samantha Mewis has been voted the 2020 U.S. Soccer Female Player of the Year.

This is the first U.S. Soccer Female Player of the Year award for Mewis. She becomes the 17th different WNT player to win the award.

“It’s obviously a huge honor to be a part of the list of players that have won this award in the past,” said Mewis. “It should go without saying that it’s the team that does the work on the field and I just have so much respect for the other nominees this year and all my teammates. I’ve just loved playing with them on the U.S. Team, and with my teammates for the Courage and Man City. It’s still such an honor to even get called into a U.S. camp, to get playing time and to be able to score goals for my country. All that continues to be surreal to me. I owe so much to so many people who have helped me on my journey and any individual award is a credit to them.”

The 28-year-old Hanson, Massachusetts native has put forth excellent performances for club and country over the past few years, highlighted by a breakthrough showing at the 2019 FIFA Women’s World Cup. Mewis carried that form into 2020 and is now widely recognized as one of the world’s top two-way midfielders. The six-foot Mewis -- the tallest field player in USWNT history – has shown her ball-winning abilities in the air and on the ground while proving to be a player who can drive a team forward with her dribbling and passing, both short and long-range. In addition, she’s proven to be a goal scorer from inside the penalty area, especially with her head and on set pieces, while also creating danger with her shooting from distance.

In 2020, Mewis played in eight of the nine games for the USA, starting six, and scored four goals, all coming at the 2020 Concacaf Women’s Olympic Qualifying tournament where she scored back-to-back braces against Costa Rica and Mexico. 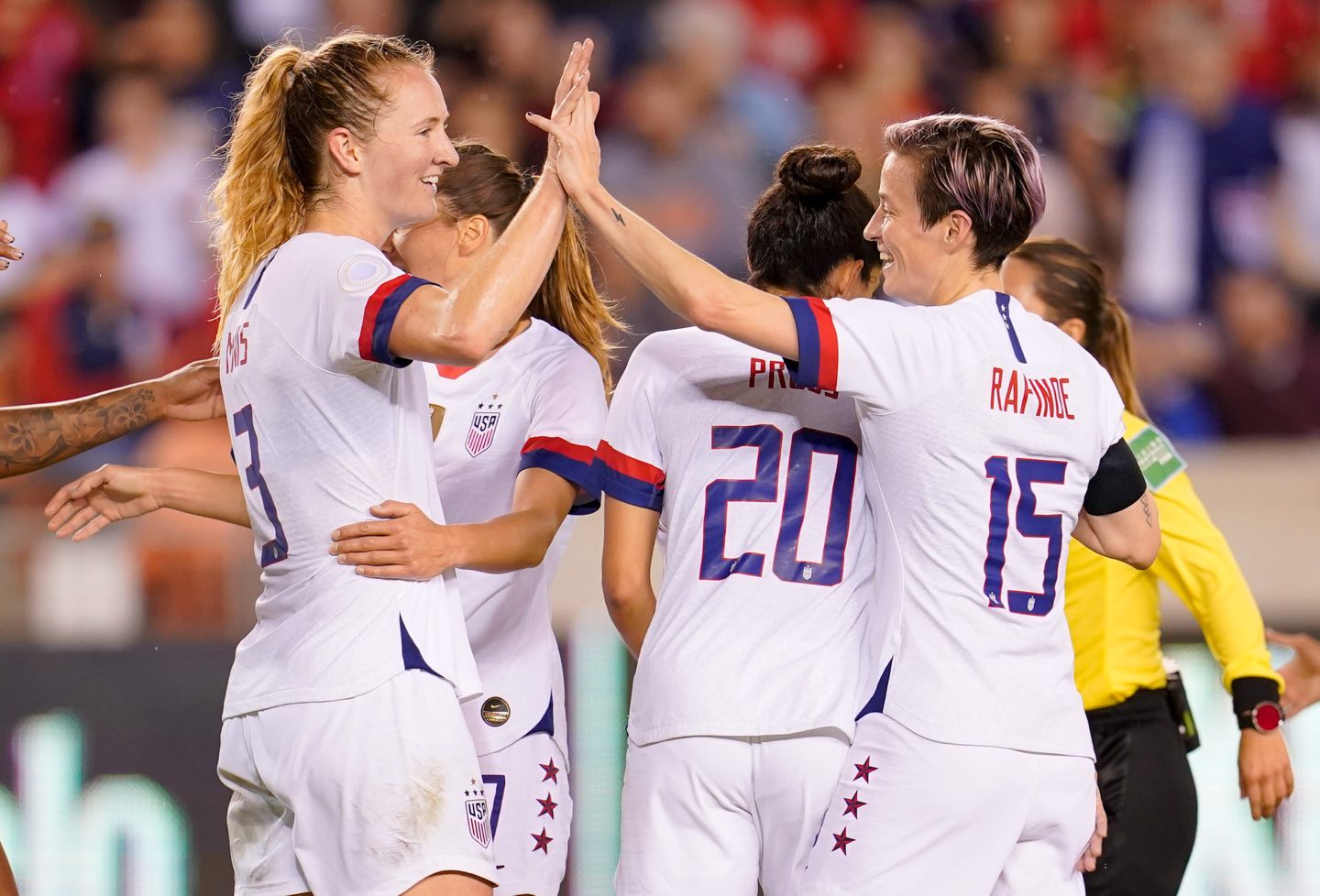 Mewis also put in a strong performance at the NWSL Challenge Cup, playing in all five games for the North Carolina Courage before making a move to England and Manchester City in early August. Over 17 matches for Man City in the league, FA Cup, Continental Cup and UEFA Women’s Champions League, she has shown to be one of the best midfielders in the FA Women’s Super League while scoring six goals across all competitions; three in the league, two in the FA Cup and one in Champions League.

She helped Man City win the delayed FA Cup with a 3-1 victory over Everton on Nov. 1. In that match at Wembley Stadium, she became the third American, and second American woman, to score in an FA Cup Final, joining Carli Lloyd (2017) and Christian Pulisic (2020).

She also scored the game-winner in the first leg of City's 2-1 Round of 32 UEFA Women's Champions League match at Göteborg in Sweden. City polished off Göteborg, 3-0, in the second leg at home to earn a berth into the quarterfinals.

"I am very happy for Sam,” said U.S. Women’s National Team head coach Vlatko Andonovski. “Due to her work ethic and mentality to be the best player she can be, her every day dedication to being a professional and her sincere caring for her teammates and the team as a whole, she's a true example of what the USWNT stands for. She has proven herself and excelled in three different environments this year and I know she has even more great times ahead in her career."

Mewis ended 2020 in a special fashion, getting to play with her older sister Kristie during the USA’s 2-0 victory over the Netherlands on Nov. 27 in Breda, a match in which Kristie scored the clinching goal. It was the first time the two had played together for the USWNT in more than six years. 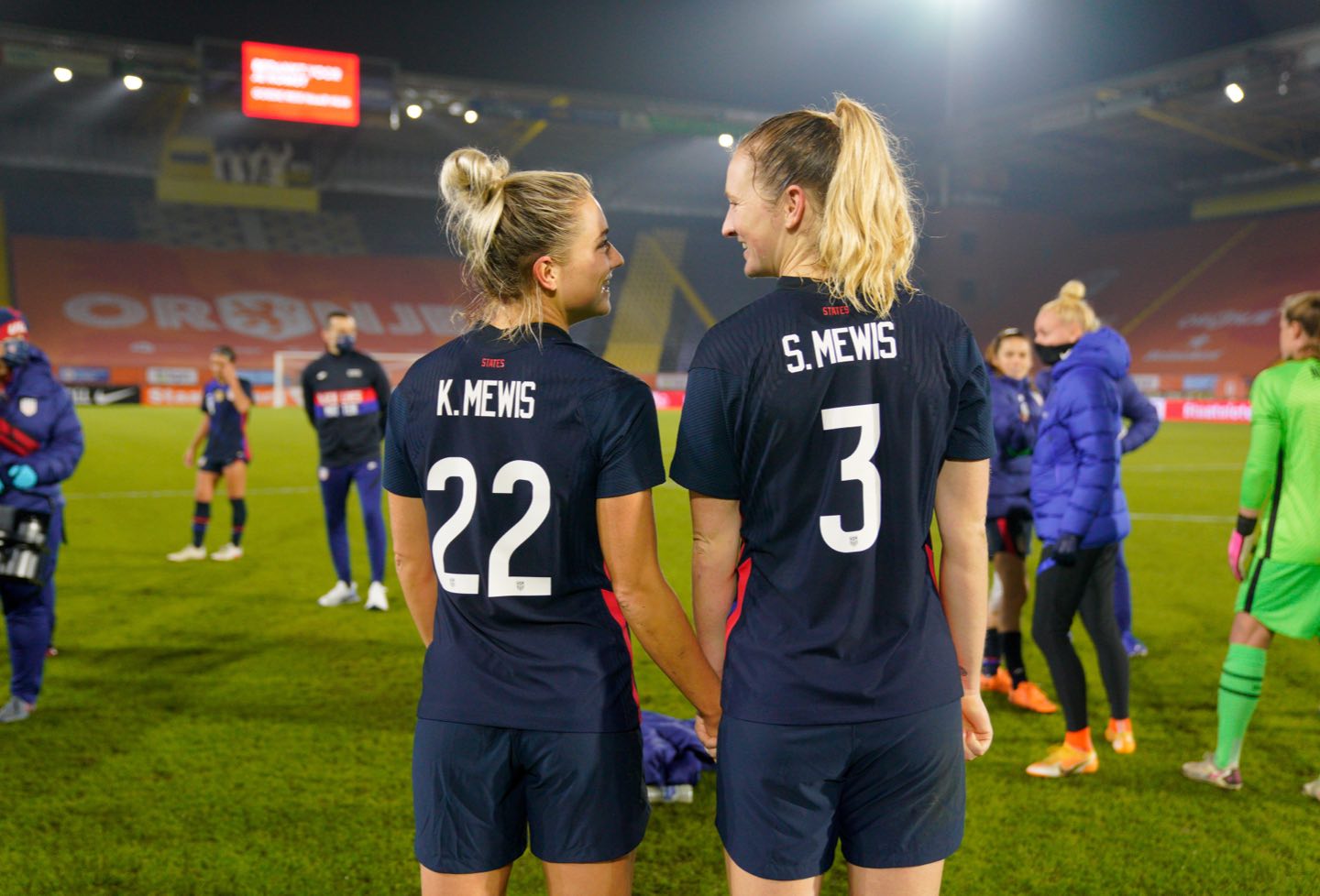 “It’s been a strange year with a lot of hardship for a lot of people, but I’m really grateful for the humanity we’ve seen this year as well,” added Mewis. “I’m just really humbled that I got the opportunity to play for the USA and for two fantastic clubs this year. My family and husband have been so supportive and to even get the opportunity to play soccer this year with everything so uncertain has been a gift.

“I’m grateful for the support of Vlatko and his staff, to the Courage and Paul Riley, who has had a big impact on me, and to all the coaches, staff and players at Man City who welcomed Rose and I with open arms. Looking forward, I’m really excited for the future of the National Team. We have big things coming up and I’m hoping I can continue to be a part of it.”

One of five finalists for the Female Player of the Year award, Mewis garnered 45 percent of the tabulated votes, followed by Crystal Dunn (29 percent) and Lindsey Horan (11 percent).

The U.S. Soccer Female Player of the Year has been awarded since 1985, when midfielder Sharon Remer earned the first Female Athlete of the Year honor. Abby Wambach won it six times, the most of any player. Mia Hamm won it five times.