Nominees Set for 2020 U.S. Soccer Female and Male Player of the Year Awards

CHICAGO (Dec. 9, 2020) – U.S. Soccer has announced the nominees for the 2020 U.S. Soccer Female and Male Player of the Year awards. This year’s field features defenders Abby Dahlkemper and Crystal Dunn, midfielders Lindsey Horan and Samantha Mewis and forward Christen Press for the USWNT honors while defender Sergiño Dest, midfielders Tyler Adams and Weston McKennie and forwards Jordan Morris, Christian Pulisic and Gyasi Zardes are in the running from the USMNT for their achievements with club and country.

Votes for U.S. Soccer Player of the Year awards are collected from respective National Team coaches, National Team players who have earned a cap in 2020, members of the U.S. Soccer Board of Directors, U.S. Soccer Athletes’ Council, National Women’s Soccer League head coaches (for the USWNT awards) and American soccer league (MLS and USL) head coaches (for the USMNT awards), select media members and former players and administrators. In addition, select college coaches vote for the USWNT award. 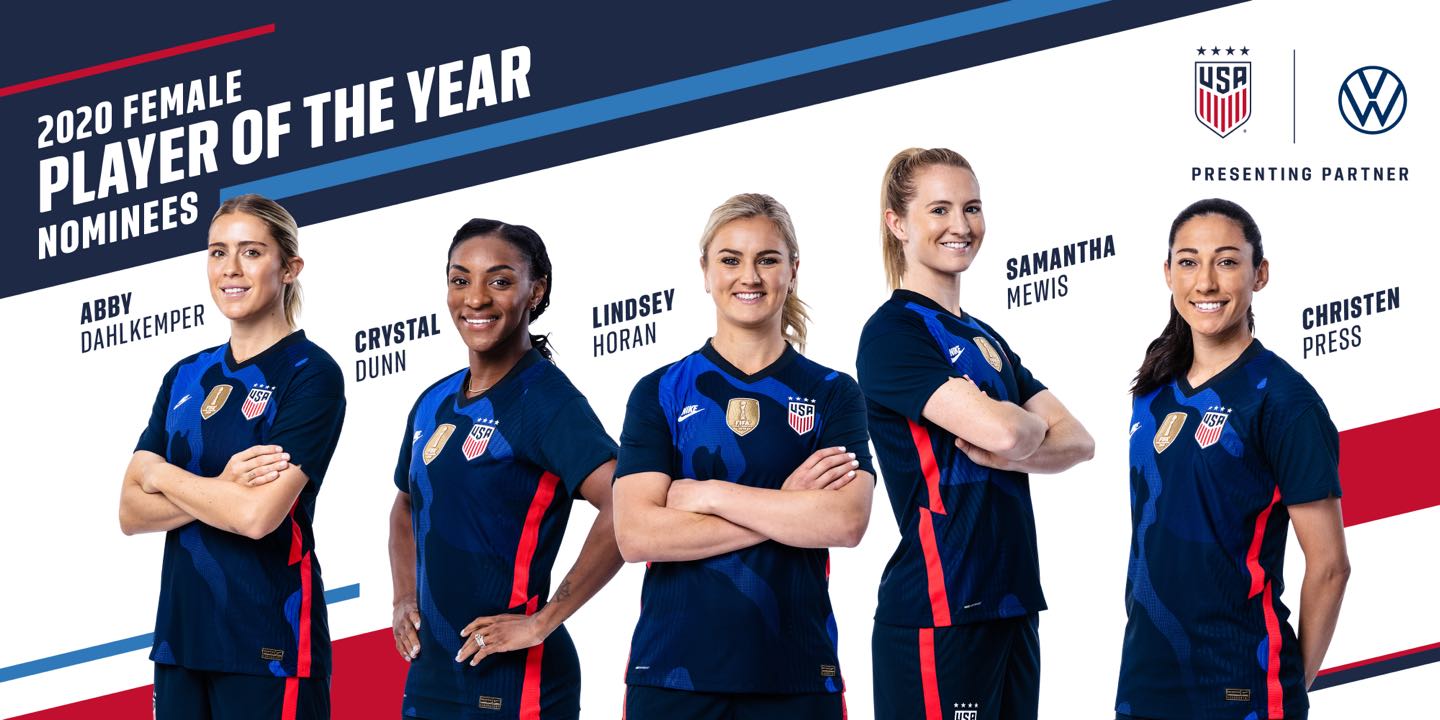 Female Player of the Year

All five Female Player of the Year nominees played significant roles for the USA during a truncated 2020 schedule due to COVID-19 that still featured excellent performances from the U.S. team during the Concacaf Olympic Qualifying tournament and the SheBelieves Cup, both of which the Americans won. The USA defeated the Netherlands, 2-0, on Nov. 27 in its only match since the pandemic began to finish the year at 9-0-0.

Dahlkemper led the USA in minutes played for the second year in a row and played almost every minute for her club during the adapted NWSL season. Dunn was the only player to start every game in 2020 for the USA and showed her two-way abilities once again at outside back. Lindsey Horan tied for the team lead in goals, out of the midfield no less, and was consistently one of the top players in the NWSL through the Challenge Cup and Fall Series. Mewis continued her accent as one of the world’s best two-way midfielders, scoring four times at Olympic Qualifying and putting in excellent performances at the

SheBelieves Cup and in the NWSL Challenge Cup before transferring to Manchester City where she scored in the FA Cup Final and helped City raise the trophy. Press tied with Horan for the team lead in goals and assists with seven and three, respectively, and scored two world class finishes at the SheBelieves Cup, against England and Japan.

None of the Female Nominees have won the award before, meaning there will be a first-time winner in 2020, although Horan did win the U.S. Soccer Young Female Player of the Year in 2013. In addition, none of the five players nominated this year were nominated last year.

The U.S. Soccer Female Player of the Year has been awarded since 1985, when midfielder Sharon Remer (known then as Sharon McMurtry) earned the inaugural honor. Abby Wambach holds the record by winning the award six times. Mia Hamm won it five times. Midfielder Julie Ertz has won it twice in the past three years, in 2017 and 2019, while forward Alex Morgan won it in 2018, which was her second time winning. 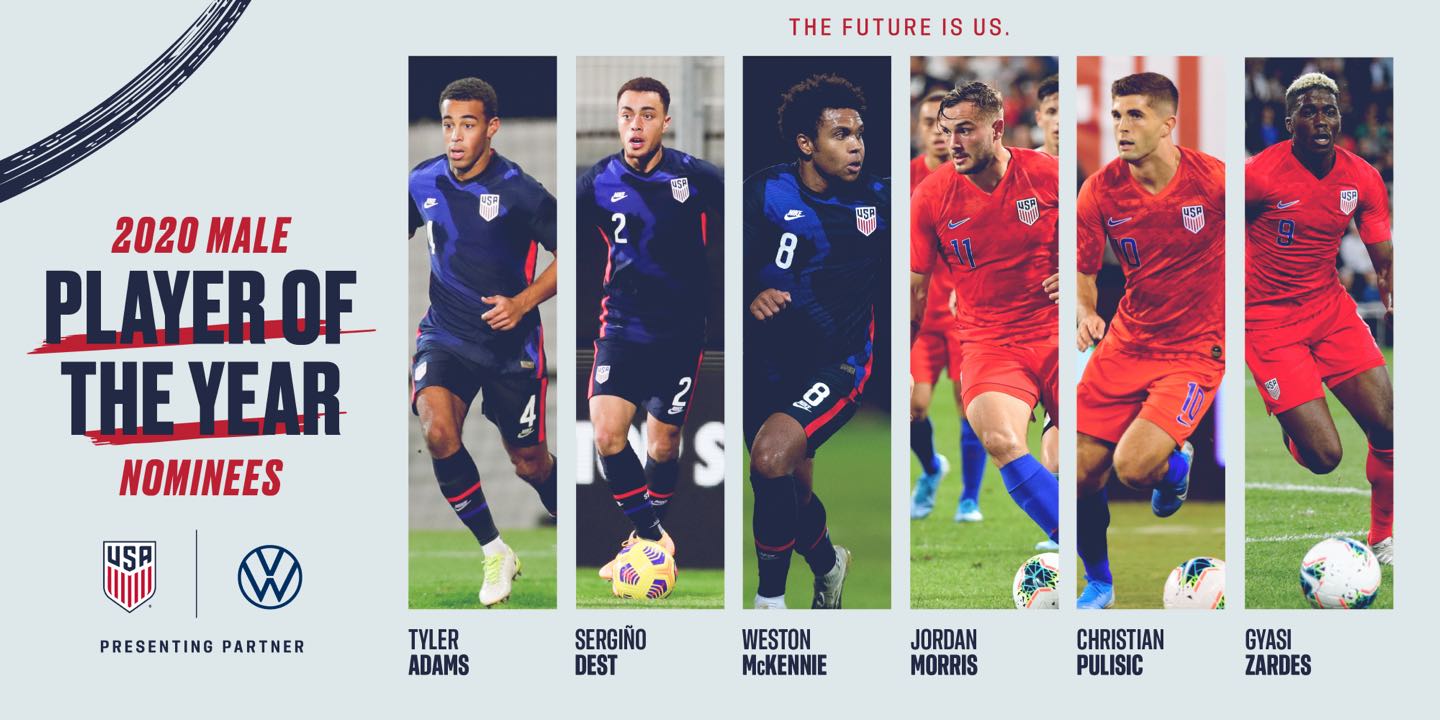 Male Player of the Year

With the USA playing just four matches in games that featured vastly different rosters, the club contributions of the six Male nominees figured prominently in this year’s nominations.

Adams wrote more history for U.S. players in Europe when he scored the 88th-minute game-winner in RB Leipzig’s 2-1 win against Atlético Madrid in the UEFA Champions League quarterfinal. Starting the year with Dutch giants Ajax, full back Sergiño Dest moved to Barcelona in October and became the first American to play for the Catalan giants and featuring prominently for the club in La Liga and Champions League play. Similarly, McKennie moved from Schalke to Juventus on loan in August, slotting straight into the lineup for the Italian giants and has scored in each of his last two matches, once each in Serie A and the Champions League. Morris’s 18 combined goals and assists placed him second overall in Major League Soccer as he helped guide Seattle Sounders FC back to the MLS Cup Final for the fourth time in five seasons. Pulisic was widely regarded as one of the best players in the Premier League after the English top-flight returned to play this summer and became the first USMNT player to score in the English FA Cup Final. Continuing his consistency inside the penalty area, Zardes’ 12 goals saw him finish second overall in the MLS Golden Boot race and help Columbus Crew SC return to the MLS Cup Final for the first time since 2015.

Pulisic is the only finalist to have previously won the award, earning the honor in both 2017 and 2019. Earning his first Male Player of the Year nod, Dest also garnered Young Player of the Year honors in 2019. McKennie and Morris each earn their third nominations, while Adams and Zardes are up for the award for a second time.


The U.S. Soccer Male Player of the Year has been awarded since 1984 when Rick Davis won it. Current U.S. Soccer Sporting Director Earnie Stewart won it in 2001. Landon Donovan holds the record for most awards, winning it four times, while Clint Dempsey won it on three occasions. Then eighteen-year-old Christian Pulisic became the youngest player to win the award in 2017. 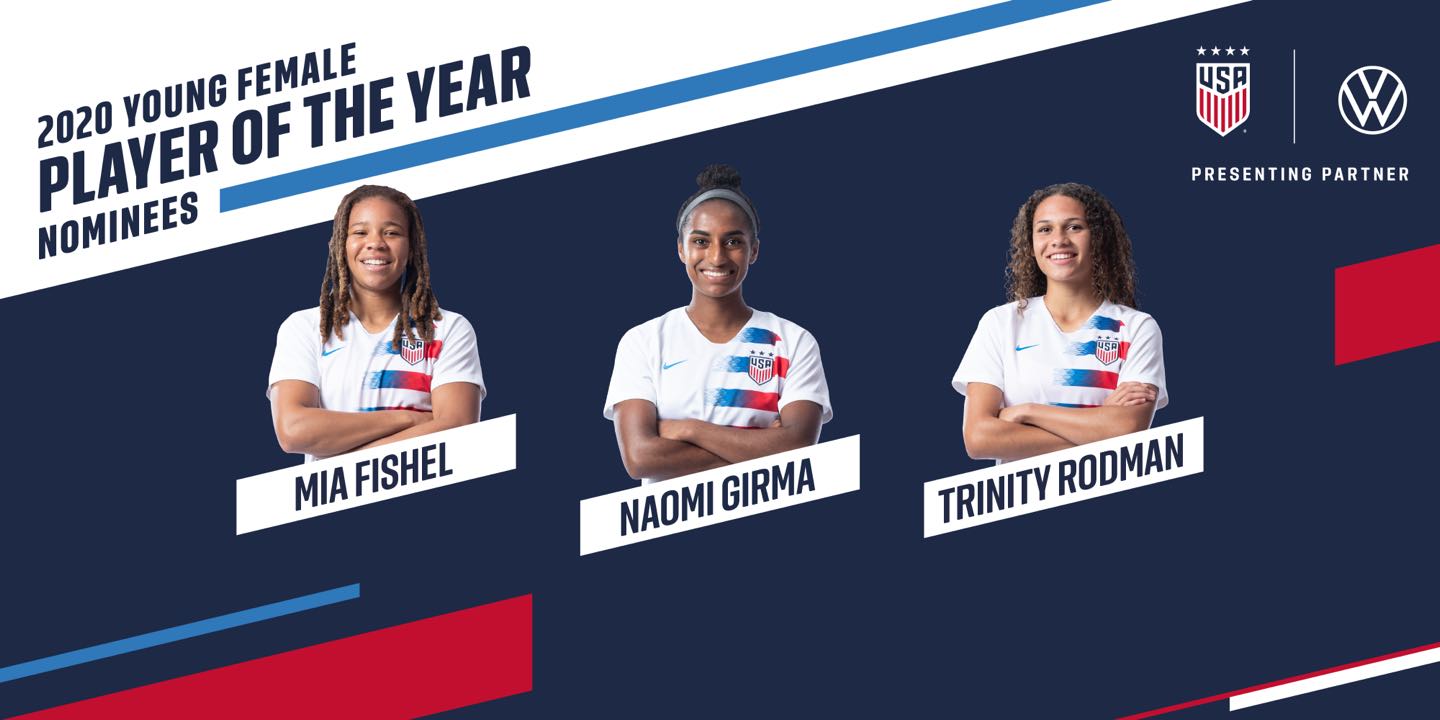 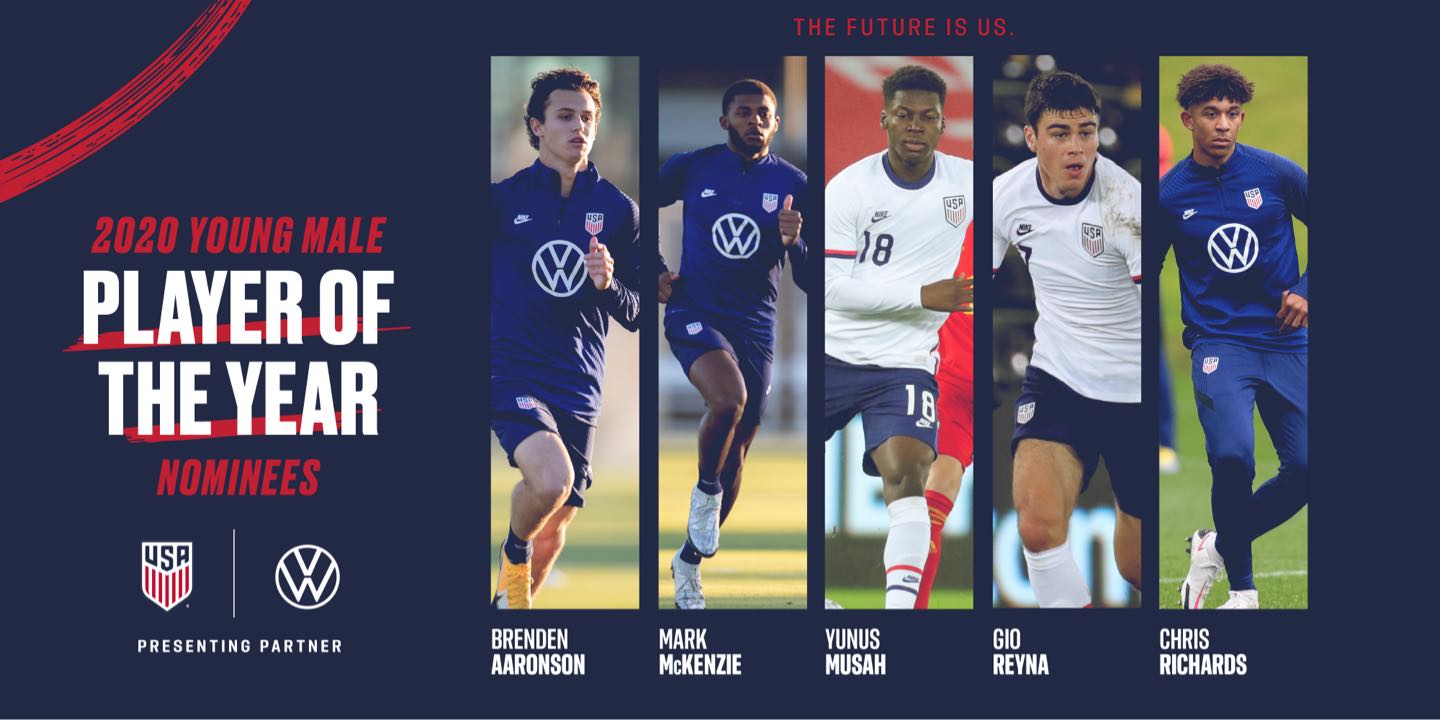 Young Female and Young Male Player of the Year

All three female nominees – defender Naomi Girma and forwards Mia Fishel and Trinity Rodman – played major roles in USA’s domination of the 2020 Concacaf U-20 Women’s Championship. The USA won all seven games by a 44-1 margin and qualified for the FIFA U-20 Women’s World Cup, which in November was finally cancelled due to the pandemic. Fishel scored 13 goals in the tournament, a record for any Youth National Team player in any Concacaf competition while Rodman added eight scores and a team-leading six assists. Girma marshaled a defense that allowed just one goal.

The Philadelphia Union duo of midfielder Brenden Aaronson and defender Mark McKenzie both earned MLS Best XI honors as they helped the club claim its first trophy in the MLS Supporters Shield. After a breakout start to the season with Spanish La Liga club Valencia, midfielder Yunus Musah earned his first USMNT call-up in November and became the first player to start two matches for the senior team before their 18th birthday. Attacker Gio Reyna became a regular in the Borussia Dortmund lineup, featuring prominently in the Bundesliga and Champions League throughout 2020 before also becoming the third-youngest goal scorer in USMNT history with his opening goal against Panama on Nov. 12. After proving crucial in Bayern Munich II’s league title, Chris Richards broke into the Bundesliga giants’ first team, earning his first Bundesliga start and assist this fall as well as his Champions League debut for the current titleholders. 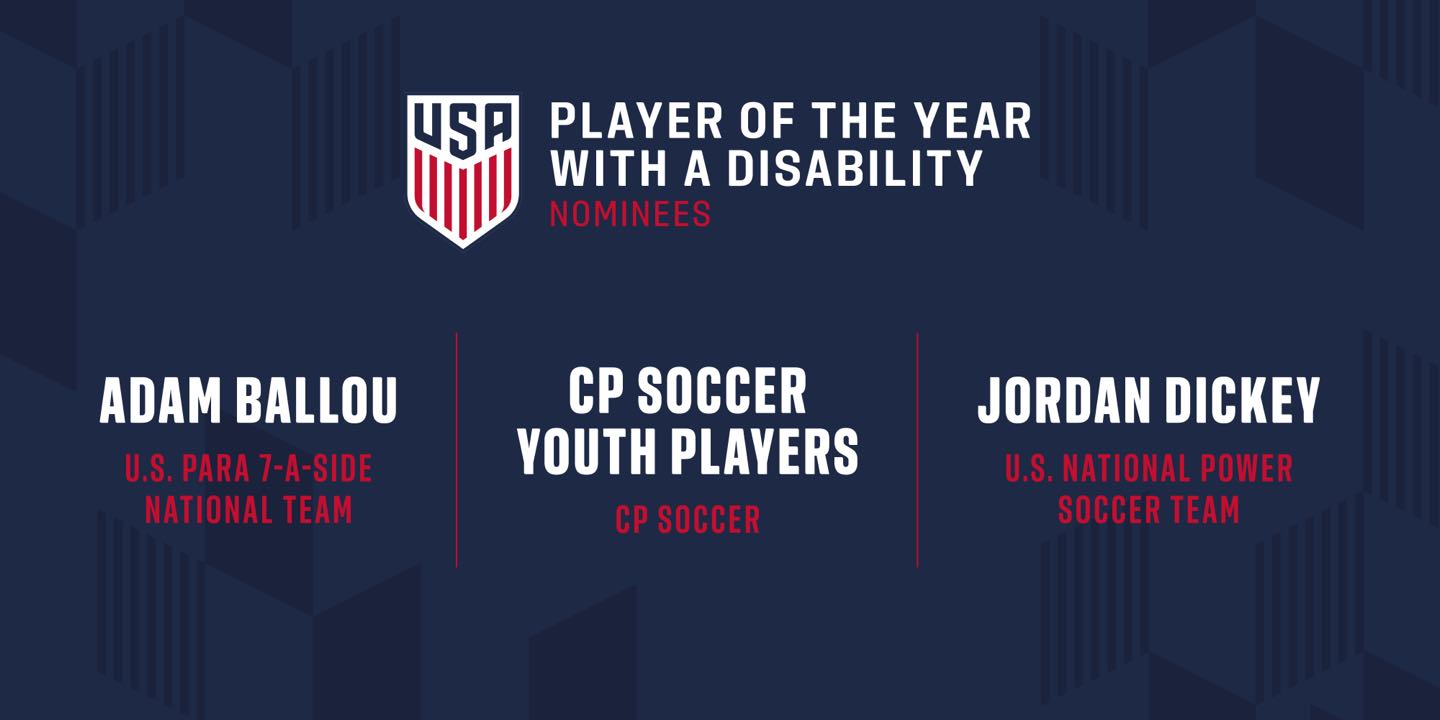 Player of the Year with a Disability

Three players have been nominated for Player of the Year with a Disability in a 2020 that saw their programs significantly limited by the COVID-19 pandemic.

U.S. Para 7-a-Side National Team forward Adam Ballou, 2016 Player of the Year with a Disability, is nominated after making a historic move overseas to play for Spanish club Levante. Ballou led the team in scoring and second place in the league before its season was interrupted. During the pandemic, CP Soccer youth players nationwide came together for virtual Zoom training sessions five days a week for 11 weeks during the height of the country’s stay-at-home orders. This group of players logged over 100 hours of training during the pandemic and were joined by a number of U.S. Soccer stars. Following a decorated career with the US Power Soccer National Team, co-captain Jordan Dickey also earned a nomination.