The cups continued to runneth over for U.S. Men's National Team players on a historic Sunday.

Called upon to make a crucial 47th minute save in City's 1-0 victory over Tottenham Hotspur at Wembley, Steffen joined an exclusive club, becoming the fourth USMNT player and third goalkeeper to play in and win the English League Cup Final.

McKenzie came on for the final three minutes to help Genk close out a 2-1 win over Standard Liege in Brussels, Belgium, becoming the first U.S. player to play in and win a Belgian Cup final.

And there's plenty of opportunities for more domestic cup glory over the next five weeks. Keep up with it all with ussoccer.com’s Domestic Cup Tracker. 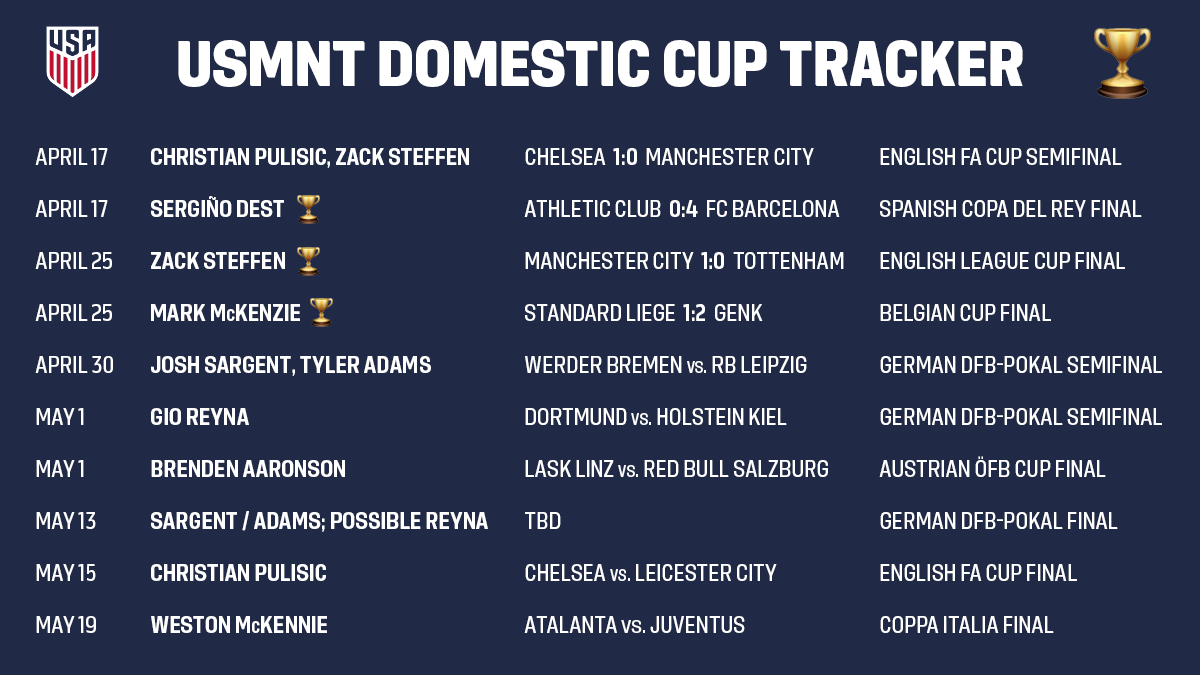 Christian Pulisic didn’t get statistical attribution, but he did help set up the lone goal of Chelsea’s 1-0 win over West Ham United on Saturday with a "hockey" assist. The 22-year-old attacker fed Ben Chilwell the lead pass in the 43rd minute. Chilwell then sent Timo Werner a left-wing pass for the goal. The result gave fourth-place Chelsea a three-point lead over fifth-place West Ham.

A week after Young Boys clinched the Swiss Super League crown, Jordan Siebatcheu gave himself an early birthday present by heading home the game-winning goal in the 76th minute of the club’s 2-1 triumph over Sion. Siebatcheu, who celebrates his 25th birthday on Monday, has accrued 11 goals over 12 starts and 29 league appearances this season.

Daryl Dike enjoyed a pretty memorable week. As a halftime substitute, Dike scored the lone goal via a bicycle kick to give Barnsley a 1-0 triumph against Huddersfield Town on April 21. The Orlando City SC loanee’s strike rate is now at nine goals in 17 matches since joining Barnsley on Feb. 1.

Following other results around the league on Sunday, he and his Barnsley teammates learned they had booked a spot in the English Championship playoffs in the team's quest to reach the English Premier League.

Center back Cameron Carter-Vickers, who has been a fixture while on loan with Bournemouth this season, will join Dike and Barnsley in the promotion playoffs.

Tyler Adams played 74 minutes for RB Leipzig in its 2-0 Bundesliga win over 10-man Stuttgart on Sunday and helped set up the hosts' second goal. His pass to led to a foul in the penalty area. Emil Forsberg converted the ensuing spot kick for a two-goal advantage in the 67th minute.

In Valencia's 1-1 La Liga draw with Deportivo Alaves on Sunday, midfielder Yunus Musah became the youngest USMNT to achieve 30 league appearances in one season in one of the top five European leagues at 18 years, 156 days.

While he was not chosen for Barcelona's bench in its 2-1 La Liga win at Villarreal on Sunday, Konrad de la Fuente certainly made the most of his opportunity with Barca B in its 2-1 victory over CD Alcoyano in Spain's Segunda B. He struck twice, including a spectacular game-winning goal in the 79th minute.

Steffen wasn't the only USMNT keeper to register a shutout this past weekend. In his second game as New York City FC captain, Sean Johnson registered his first clean sheet of the season in a 5-0 victory over FC Cincinnati on Saturday afternoon. Later that day, it was Matt Turner's turn to put up a zero on the scoreboard as he also secured his first shutout in a 1-0 win over D.C. United later that day.

-- Johnny Cardoso (Internacional; Brazilian Serie A) - Not in 18, DNP in 2-0 loss at Always Ready in Copa Libertadores  (April 20)