No player or team can ever enough trophies and medals. In fact, the more, the better. And that goes double for the U.S. Men's National Team.

Buoyed by their success during the 2020-21 seasons in Europe, the Americans are confident they can add piece of team hardware to their burgeoning collection of individual achievements by winning the inaugural Concacaf Nations League championship next month.

Their hunger is fueled by the fact that nine players have won a total of a dozen trophies during the past five months, with one more on the line.

"I don't think that's been really done before in the past. They're playing and they're winning big trophies. It's huge and it's a really big step in U.S. football."

"It's amazing. I can't say enough about it, how proud we are for the players," head coach Gregg Berhalter said earlier this week. "No matter what competition, they're in teams that are competing to win the titles. That's exciting because it's what culture of winning [is] to the U.S. National Team, and that's what we're looking for.

"When we step on the field, we compete to win these trophies. We want guys that really understand what it means to win and value what it means to win, but also have an expectation that winning is what we're looking for. Anything less than that isn't good enough. We have a group that can do it. It's not going to be easy. It's easy to talk about it. it's a lot harder to do. It's a lot of sacrifice. It's a lot of hard work. It's a lot of intensity. We feel like we have a strong group."

The USA faces Honduras in the semifinals in Denver on June 3. The winner will meet the victor of the Mexico-Costa Rica semifinal on June 6; the third-place game is the same day.

Aaronson has gotten used to that championship feeling, not once but twice as he prepares for the CNL with Sunday's international friendly against Switzerland in St. Gallen (2 p.m. ET; ESPN, UniMás, TUDN). 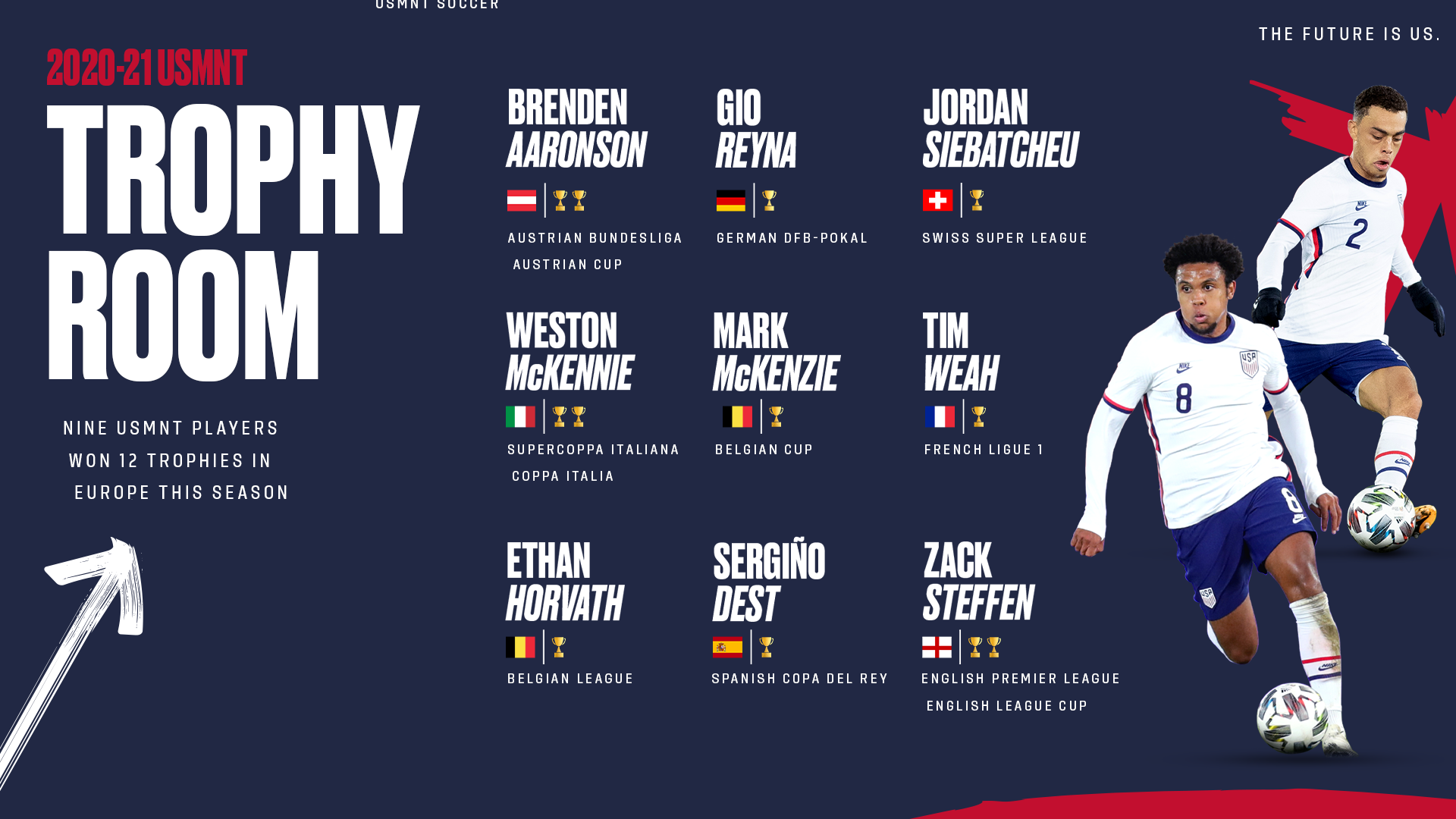 "The goal for the group is just to win the trophy," he said. "Two games for us. It's just winning that trophy, it's a good preparation for us because we're playing Switzerland and we're going back over to the states. So that's something that most of us will have to do, and it's good preparation for a World Cup qualifying. The whole main goal of this trip is winning the Nation's League trophy."

The 20-year-old Aaronson has earned three trophies in the past eight months and he's still hungry for more. He helped the Philadelphia Union to the MLS Supporters' Shield in 2020. Following his transfer in January, he then played a major role with Red Bull Salzburg, securing the Austrian Bundesliga crown and Austrian Cup.

"I'm really excited for the group and the guys," he said. "It's just pushing onto the Nation's League and then winning a trophy with this group of guys. That's the biggest thing right now. That's the big focus for everybody here…I'm confident and ready to go and I think the team is too."

Two USMNT regulars have some unfinished business this weekend, forcing them to miss the Switzerland encounter.

Either Christian Pulisic or Steffen will walk away with a UEFA Champions League winners medal Saturday. Pulisic and Chelsea will face Steffen and Manchester City in the final at Estádio Do Dragão in Porto, Portugal (3 p.m. ET; Univision, TUDN, CBS, Paramount+).

"When you think about having two Americans now playing in the Champions League final, I get goosebumps thinking about it," Berhalter said. "It's an amazing feeling. We're going to be watching them and rooting them on. We’re proud of both of them."

Regardless which teams prevails, watching a teammate raising the UEFA Champions League trophy in triumph could give USMNT players some more inspiration and motivation to add to their trophy collection.