USA Reaches Semifinals For 15th Time in 16 Gold Cups; Will Face Qatar on Thursday in Austin, Texas (7 p.m. ET; FS1, Univision)
July 25 2021
On the Pitch
ARLINGTON, Texas (July 25, 2021) – The U.S. Men’s National Team defeated Jamaica 1-0 on an 83rd-minute header from Matthew Hoppe in a closely-contested Gold Cup Quarterfinal on Sunday night at AT&T Stadium. The shutout victory was the USA’s third in four games and sends the USMNT to the confederation semifinals for the 15th time in 16 editions of the competition. The USA will face Qatar, an invited guest team and the reigning Asian Football Confederation champion, on Thursday night in Austin, Texas (7 p.m. ET; FS1, Univision).

Tonight’s win was the USMNT’s 10th victory in 11 contests in 2021, tying the mark set in 2007 for the fastest time to 10 wins in a calendar year. Scoring his first international goal, Hoppe is the seventh different player to score for the USA in the 2021 Gold Cup.

Meeting in the knockout stage of a fourth straight Gold Cup, the USA and Jamaica kept each other honest for the length of the game. The USA’s best early chance came off the left foot of Hoppe, though Jamaica goalkeeper Andre Blake matched the effort with a fantastic save. U.S. goalkeeper Matt Turner also had a highlight-reel save to deny Junior Flemings just before the break.

Hoppe threatened again minutes into the second half, but Blake was again up for the challenge. The veteran goalkeeper also made an impressive save on a hard shot from second-half substitute Gyasi Zardes down the stretch. Jamaica’s best chance came with 11 minutes left as a free kick bounced just inches away from Shamar Nicholson inside the six-yard box.

Again active throughout the second half, Hoppe made his last chance count from the air when he put away Cristian Roldan’s chip to the back post to clinch the victory.

After losing to Jamaica in the 2015 tournament semifinals, the USA has now defeated the Reggae Boyz in the knockout stage of the last three tournaments- in the 2017 final, the 2019 semis and tonight’s quarterfinal. 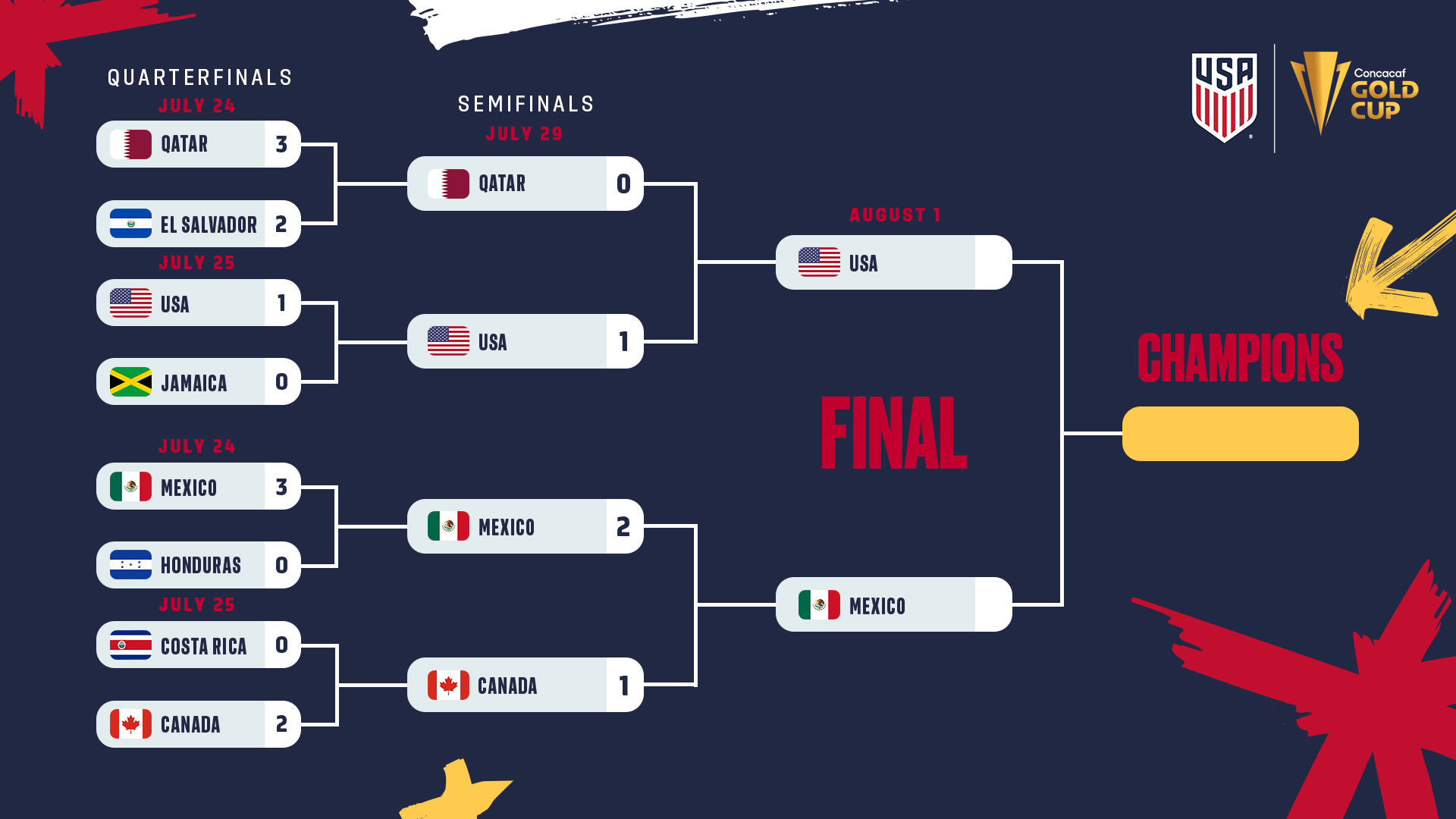 The USA will now face Qatar on Thursday, July 29 at Q2 Stadium in Austin, Texas in the 2021 Concacaf Gold Cup Semifinals. Qatar won Group D with seven points and defeated El Salvador 3-2 in the quarterfinals. The winner will face the winner of the other semifinal between Canada and Mexico in the tournament final.

USA – MATTHEW HOPPE (Cristian Roldan), 83rd minute: After being denied twice on point-blank strikes with each foot, Hoppe used his head to break the deadlock late. Kellyn Acosta played toward Roldan just inside the right side of the box and the midfielder chipped the ball to the far post. Blake came off his line but couldn’t clear it and the ball went just beyond Gyasi Zardes’s jump but right into the path of Hoppe, who headed it in at the near post for the game-winner. USA 1, JAM 0

JAM – ANDRE BLAKE, 22nd minute: Miles Robinson lifted a ball towards the top of the box where Dike did well to battle two defenders. The ball fell left to Hoppe, who hit a solid left-footed strike from 10 yards out towards the near post, but Blake reacted quickly, diving to his right to push the ball wide for a corner.

USA - MATT TURNER, 39th minute: Picking up a loose ball outside the area, Junior Flemmings turned towards goal, cut back on Kellyn Acosta and hit a dipping shot from the arc toward the right side of the net. A yard off his line, Turner dove full-stretch, parrying the ball wide with his left hand to keep the game level.