Martinique may find itself in a must-win situation against the United States in its second Group B match at the Concacaf Gold Cup at Children's Mercy Park in Kansas City, Kansas on Thursday at 10 p.m. ET (FS1, UniMas, TUDN).

The Caribbean side lost to Canada in its opening game, 4-1, at the same venue in the first game of a doubleheader on Sunday, July 11. The USA defeated Haiti in the second contest, 1-0.

While Martinique is the underdog on paper, they have given the U.S. team fits before and can’t be overlooked.

The island of Martinique is an Overseas Department of France and not an independent country. As a result, they are not considered an independent country by FIFA and therefore only compete in Concacaf competitions. They have performed well in the region and are playing in their seventh Gold Cup.

The Caribbean side's introduction to the tournament was not a memorable one in 1993. In its first game, Martinique went down to a 9-0 defeat to eventual champion Mexico in the rarefied air at Estadio Azteca in Mexico City that July 11. Luis Roberto Alves, also known as Zague, scored five goals. Les Matinino finished with a 0-2-1 record, earning their first points in a 2-2 draw with Canada as second-half substitute Thierry Fondelot tallied an 86th-minute equalizer. 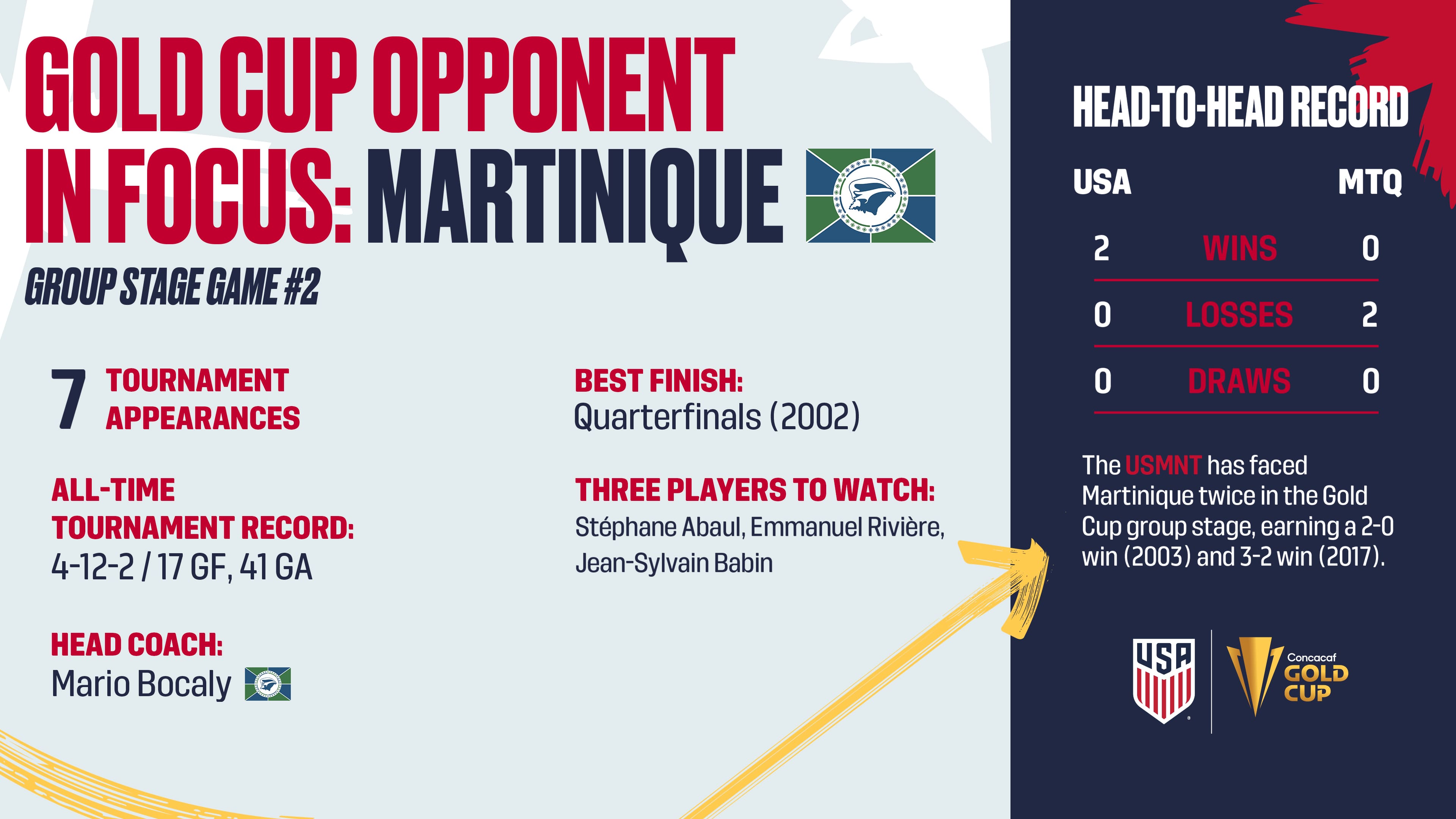 A sixth-place finish at the 2002 competition was Martinique's best showing when it reached the quarterfinals. Les Matinino dropped a 2-0 result to Costa Rica in its Group C opener before it rebounded with a 1-0 win over Trinidad & Tobago on Patrick Percin's goal. In the quarterfinals, the Caribbean side battled Canada to a 1-1 draw after 120 minutes but lost in a shootout, 6-5.

In their most recent competition, the 2019 Gold Cup, Les Matinino finished with a 1-2-0 mark and failed to reach the knockout round. It's shining moment came in a 3-0 win over Cuba.

Despite playing in only three games at the 2017 Gold Cup, Kevin Parsemain tied Canada's Alphonso Davies and Jordan Morris for goal-scoring title with three goals apiece. Parsemain is Martinique's all-time leading Gold Cup scorer, finding the net in three competitions against either the USA or Mexico (2013, 2017, 2019) and is tied with Jamaica's Darren Mattocks for the most goals by a Caribbean player in the competition.

Mario Bocaly, 42, has guided the team since December 2017. Born in Le Lamentin, Martinique on July 28, 1978, Bocaly directed the national team to a 12th-place finish at the 2019 Gold Cup. He has coached at several clubs in his native land, including Réveil Sportif, Aiglon du Lamentin, US Marinoise and Golden Star. Bocaly was an assistant coach with Racing Club de Rivière Pilote when he was appointed national coach.

Prior to the Gold Cup, Martinique fell 2-1 at home to Guadeloupe on June 23. The global pandemic shelved its national team in 2020 after finishing with a 0-1-3 mark against Honduras and Trinidad & Tobago in the Concacaf Nations League in 2019.  Les Matinino played T&T to a 1-1 home draw and a 2-2 road tie. The host Hondurans edged the Caribbean team, 1-0, before Martinique registered a 1-1 deadlock at home with the Central American side.

Its last win was a 3-0 result over Cuba at the 2019 Gold Cup that June 19. Stéphane Abaul and Kevin Fortune, who played the entire 90 minutes in the 4-1 Group B opening loss to Canada on Sunday night, scored against the Cubans, as did Joris Marveaux.

The USA has played Martinique twice in its history, both times emerging with victories at the Gold Cup. In 2003, Brian McBride - now the USMNT general manager - struck twice in a 2-0 win at Gillette Stadium in Foxborough, Mass. as the Americans won the Group C crown that July 14. The veteran striker moved into third place among USMNT all-time goal-scorers (23), breaking a tie with Bruce Murray. Goalkeeper Kasey Keller notched his 31st career shutout, tying Tony Meola for the most in USMNT history.

Jordan Morris recorded a brace in a 3-2 Group B triumph over Martinique in Tampa, Fla. on July 12, 2017. Goals by Omar Gonzalez (53rd minute) and Morris (64th) gave the Americans a two-goal advantage before Les Matinino rallied behind a pair of second-half goals by Parsemain. Morris, off a Gyasi Zardes pass, snapped the deadlock, connecting from 12 yards in the 76th minute.

Martinique has mostly a veteran 23-player squad with 13 players over the age of 30. The roster is dominated by 14 players from three Martinique teams - Club Franciscain (six players), Golden Lion (five) and Samaritaine (three), and five overseas players.

Other starters vs. the Canadians included three French-based forwards Emmanuel Rivière (Auxere), who scored his second international goal against the Canadians to give Martinique a 10-minute lead off a Crétinoir interception on Sunday, Kevin Fortune (Auxerre), Patrick Burner (Nimes), and defender Jean-Sylvain Babin (Sporting Gijon, Spain).