KANSAS CITY, Kansas (July 15, 2021) – The U.S. Men’s National Team secured a spot in the knockout stage of the Concacaf Gold Cup with an emphatic 6-1 victory against Martinique on Thursday night at Children’s Mercy Park. Daryl Dike led the charge with two goals, while Miles Robinson, Gyasi Zardes, and Nicholas Gioacchini each added one.

The match featured five players making their first career starts, and two making their international debuts. After making their USMNT debut off the bench on Sunday night against Haiti, Gianluca Busio, James Sands and Eryk Williamson each earned their first starts. George Bello, who debuted in January, also made his first start, as did newcomer Matthew Hoppe, who played his match for the U.S. at any level. Donovan Pines then became the 47th different player to make his MNT debut under Gregg Berhalter when he entered in the second half.

Berhalter made seven changes from the starting XI that started in the opening night win over Haiti, and the group wasted little time imposing themselves as the USA dominated the match from the opening whistle.

Dike opened the scoring on a header in the 14th minute and was involved in the second goal eight minutes later when another header went off Samuel Camille and was registered as an own goal. Shaq Moore and Cristian Roldan also joined the attack often, causing goalkeeper Meslien Gilles to make two solid saves.

The USA kept its foot down and added four more in the second half. Dike earned his second of the night with a beautiful chip, and Zardes and Gioacchini added one apiece after coming in off the bench.

USA goalkeeper Matt Turner was well positioned to handle a couple of hard shots but had no chance on Martinique’s penalty kick which prevented the clean sheet.

The USA and Canada have each won their first two Group B games and have both clinched a spot in the Quarterfinals. The two will meet Sunday in the Group finale in front of a sold-out crowd in this same stadium (5 p.m. ET, FOX, Univision, TUDN). Canada has one-goal edge in goals scored heading into the match, meaning the USA will need a victory to finish atop the group. 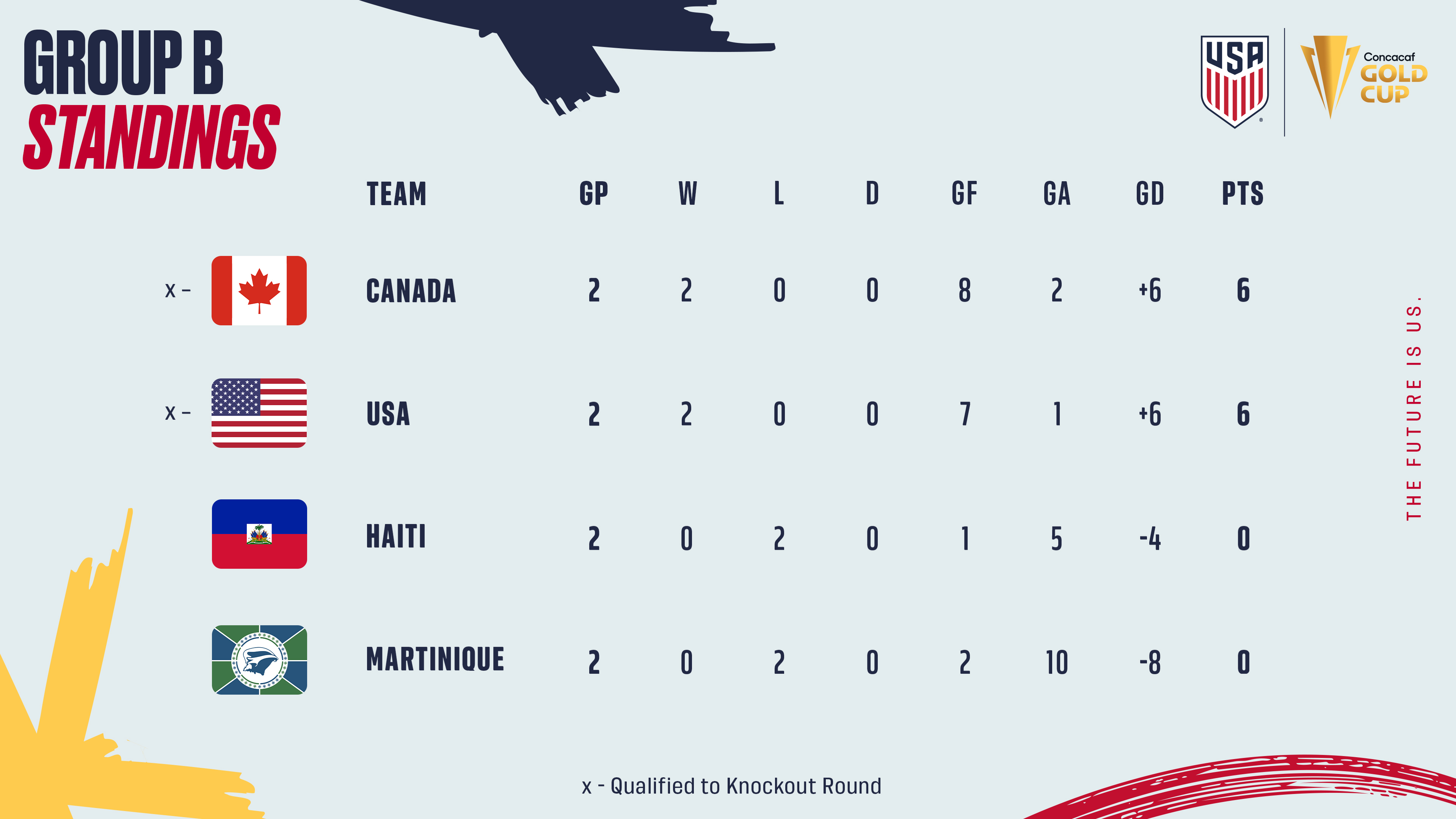 USA – DARYL DIKE (MATTHEW HOPPE), 14th minute: After a long spell of possession among the backline near midfield, Eryk Williamson sent a long diagonal ball to the far-left corner. George Bello caught up to the ball and played it back to Matthew Hoppe, who sent a beautiful cross to the back post that Dike headed in from eight yards out off the inside of the right post to put the USA ahead. USA 1, MTQ 0

USA – SAMUEL CAMILLE (OWN GOAL), 23rd minute: Cristian Roldan lifted a dangerous ball into the area that Hoppe could not settle. The ball fell to a defender who attempted to clear, but the pressing George Bello blocked, and Hoppe back-heeled to the top of the box. Busio smashed a shot on the fly that the ‘keeper tipped off the crossbar, and the rebound bounced up where Dike again headed it towards goal. With the header possibly going wide, Samuel Camille looked to make sure but it hit his heel and knocked it over the line for an own goal. USA 2, MTQ 0

USA – MILES ROBINSON (ERYK WILLIAMSON), 50th minute: Busio sent a corner from the left side over the mix in the center. Williamson recovered it quickly, turned and put the ball back across to the far post, finding a wide-open Robinson who scored the USA’s third header on the night from six yards out. USA 3, MTQ 0

USA – DARYL DIKE (CRISTIAN ROLDAN), 59th minute: Roldan played a simple ball to Dike outside the box, and the powerful forward barreled his way past two defenders into the box, drawing the goalkeeper out before deftly chipping him to complete hat trick at the far post. USA 4, MTQ 0

USA – GYASI ZARDES, 70th minute: Roldan was again involved, advancing a long ball around a defender allowing Zardes - who had just replaced Dike - to gather and run at goal, hitting a hard shot across to the far side for his fifth career Gold Cup goal. USA 5, MTQ 1

USA – NICHOLAS GIOACCHINI (GIANLUCA BUSIO), 90th minute: Having been denied twice by the goalkeeper and once by a defender’s deflection, Gioacchini finally put one through when he tapped in a cross from Busio in front of goal. USA 6, MTQ 1