Five Things to Know About Haiti

Five days after qualifying for the Concacaf Gold Cup with a dominant 4-2 triumph against Bermuda in the Prelim Round on July 6, Haiti finds itself with a greater challenge against six-time champion United States in both teams' opening match in Group B.

The United States and Haiti square off at Children's Mercy Park in Kansas City, Kansas on Sunday, July 11 at 9 p.m. ET (FS1, Univision and TUDN).

Here are Five Things to Know about Les Grenadiers:

Haiti, which won the 1973 Concacaf Championship during its golden age, became only the second Caribbean team to qualify for the World Cup. In the Haitians' first group-stage match at the 1974 World Cup in West Germany, the legendary Manu Sanon gave the Haitians a 1-0 lead over Italy, which rallied for a 3-1 win. That stunning score snapped iconic goalkeeper Dino Zoff's record run of 1,143 minutes without conceding a goal. Sanon also tallied in a 4-1 defeat to Argentina.

The Caribbean side has not been able to duplicate that accomplishment in 12 consecutive qualifying attempts since then. The Haitians have achieved some success in their eight Gold Cup appearances. They most recently finished tied with Jamaica for third at the 2019 competition (there was no third-place match) after losing 1-0 to Mexico on an extra-time penalty kick in the semifinals. The Haitians won their group with a 3-0-0 mark, besting Costa Rica, 2-1, before edging Canada in the quarterfinals, 2-1.

The team fell short of its goal of qualifying for the 2022 FIFA World Cup, losing twice to Canada in June.

Entering their eighth Gold Cup, the Haitians have an 18-28-12 mark in the competition.

Along with Mexico, Haiti is one of two teams from Concacaf against which the USMNT doesn’t have a winning record (6-6-5). The two sides first tussled in back-to-back World Cup qualifiers in Port-au-Prince, Haiti on April 3 and 4, 1954. The visitors won both matches, 3-2 and 3-0. National Soccer Hall of Famers Bill Looby and Efrain Chacurian, and Cornelius Casey scored in the first game, as Looby (twice) and two-time Olympian Ruben Mendoza found the net the next day. Members of the 1950 FIFA World Cup team, the legendary Walter Bahr and Harry Keough also played in both contests. 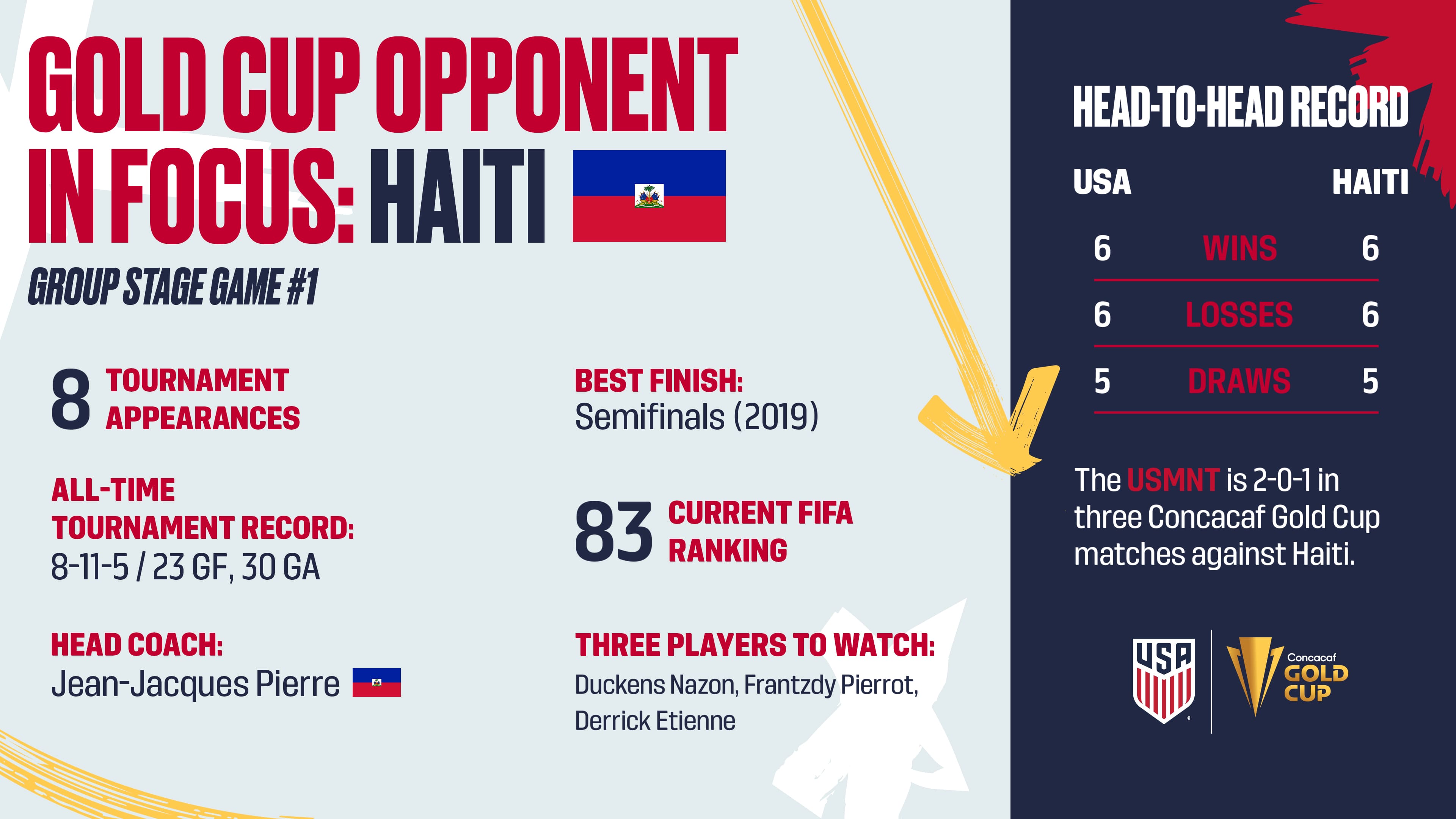 The history between the teams has been defined by streaks. After the USA emerged victorious in the first three encounters, Haiti won six consecutive matches from 1968 to 1973, which was broken by a scoreless draw in Port-au-Prince, Haiti on Nov. 10, 1976. That began another streak of three straight ties before the Americans secured a 2-0 victory in Port-au-Prince on April 8, 1983. Jeff Durgan and Chico Borja scored in that game.

The Americans also are undefeated (2-0-1) in three Gold Cup group-stage games against the Haitians. They registered a 3-0 win before 49,591 at the Orange Bowl in Miami on Feb. 12, 2000, as Jovan Kirovski, Eric Wynalda and Cobi Jones scored.

WATCH: Stuart Holden’s Strike vs. Haiti in the 2009 Gold CuP

Stuart Holden tallied a minute into stoppage time to lift the USA into a 2-2 draw at Gillette Stadium in Foxborough, Mass. on July 11, 2009. In another Foxborough meeting on July 10, 2015, Clint Dempsey's 47th-minute goal off a Gyasi Zardes feed,gave the hosts a 1-0 victory over the Caribbean side.

Jean-Jacques Pierre, a former Haitian international center back, was hired in March in his first major coaching job. The 40-year-old native of Léogâne, Haiti competed 64 times for his country, scoring five goals from 2001-2015.

A solid defender, Pierre performed a good chunk of his career for Nantes, making 143 appearances in seven French Ligue 1 seasons. He also played for Caen, Paris FC, Angers and US Granville (all France, Cavaly AS (Haiti), Arsenal de Sarandí and Deportivo Morón (both Argentina), Penarol (Uruguay) and (Panionios Greece) before retiring in 2018.

Haiti bounced back with two impressive performances in the Concacaf Preliminary Round, besting Saint Vincent and the Grenadines, 6-1, on July 2 and then Bermuda, 4-1, on July 6, in Fort Lauderdale, Fla. Duckens Nazon had a brace in the first game. Frantzdy Pierrot registered an 11-minute hat-trick in the first half of the later match.

During its two Gold Cup Prelims wins, Haiti was powered by the one-two punch of strikers Frantzdy Pierrot and Duckens Nazon, who have combined for 13 goals in 2021.

Nazon, 27, who plays for Sint-Truiden in the Belgian Pro League, has scored six goals this year. He boasts an impressive international strike rate of 26 goals in 49 matches, including four goals during a 10-minute span of the 10-0 triumph over Turks and Caicos on June 8. He also converted the final goal, a penalty kick, against Bermuda on Tuesday night. He scored twice at the 2019 Gold Cup.

Pierrot, 26, who plays for Guingamp in French Ligue 2, has scored seven goals in 2021. He connected for an 11-minute hat-trick in Haiti's 4-1 win over Bermuda on July 6, his second three-goal performance this year. Pierrot, who played his college ball at Northeastern University and Coastal Carolina University, has scored 14 goals in 23 international contests. He tallied at the 2019 Gold Cup.

Another player to watch is midfielder Derrick Etienne, Jr., who scored a goal for Columbus Crew SC in its 3-0 victory over Seattle Sounders FC in the 2020 MLS Cup. Etienne, 24, tallied the lone goal in a 1-0 win over Nicaragua during FIFA World Cup Qualifying on June 8 and added another, a penalty kick, in the win over Saint Vincent. He is the son and nephew of former Haitian internationals Derrick Sr. and Darrell Etienne.

Defenders Kevin Lafrance (AEK Larnaca; Cyprus), and Ricardo Adé (Mushuc Runa, Ecuador), both 31, are the oldest members of the squad. Forward Louicius Don Deedson (Hobro, Denmark) is the youngest at 20.