Former players recall taking taxis to the opener, a couple comeback victories and the first “Dos a Cero” against Mexico
Michael LewisJuly 5 2021
Featured

Bora Milutinovic was on the verge of panic, "running around the hotel like his hair’s on fire," forward Bruce Murray remembered.

Only a couple of hours prior to kickoff of the U.S. Men's National Team's very first game at the 1991 Concacaf Gold Cup that June 29, the bus hadn't arrived to drive his team to the Rose Bowl.

The U.S. head coach decided the team should take several taxis on what turned into a frantic and unforgettable ride to the iconic Pasadena stadium for its encounter with Trinidad & Tobago in the second game of the doubleheader.

"It was just complete mayhem," said goalkeeper Tony Meola, who rode in Milutinovic's taxi. "We get to the stadium, and you got to go through security. There are cars waiting to get in. If we had a nickel for every time he said to the same security guy, 'I am Bora.'" 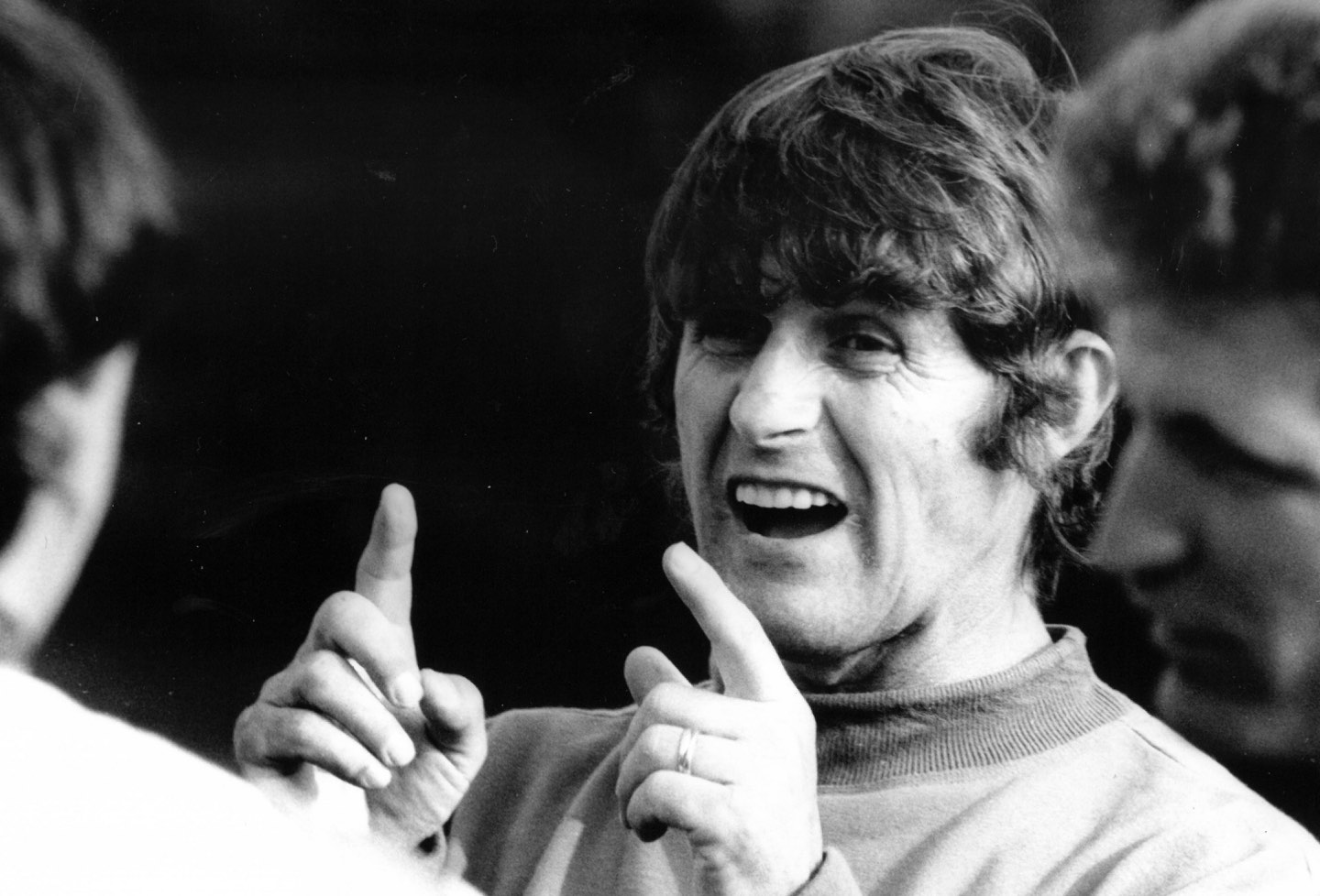 Milutinovic convinced security officials he was the coach of the U.S. Men's National Team and that the squad needed to be on the field, pronto.

"We got there late," Meola said. "The other game was just finishing up [Costa Rica's 2-0 win over Guatemala]. I kind of vaguely remember hearing in the final whistle and that's how close we were, and there was no moving the game back for whatever reason."

Not exactly the textbook method to put the finishing preparation touches for your very first Gold Cup appearance - on your own soil.

The Americans survived and lived to talk about how they overcame that little misadventure, how they bested the best of Concacaf, how they recorded the first “Dos a Cero” result against Mexico and how they secured their first major tournament triumph. 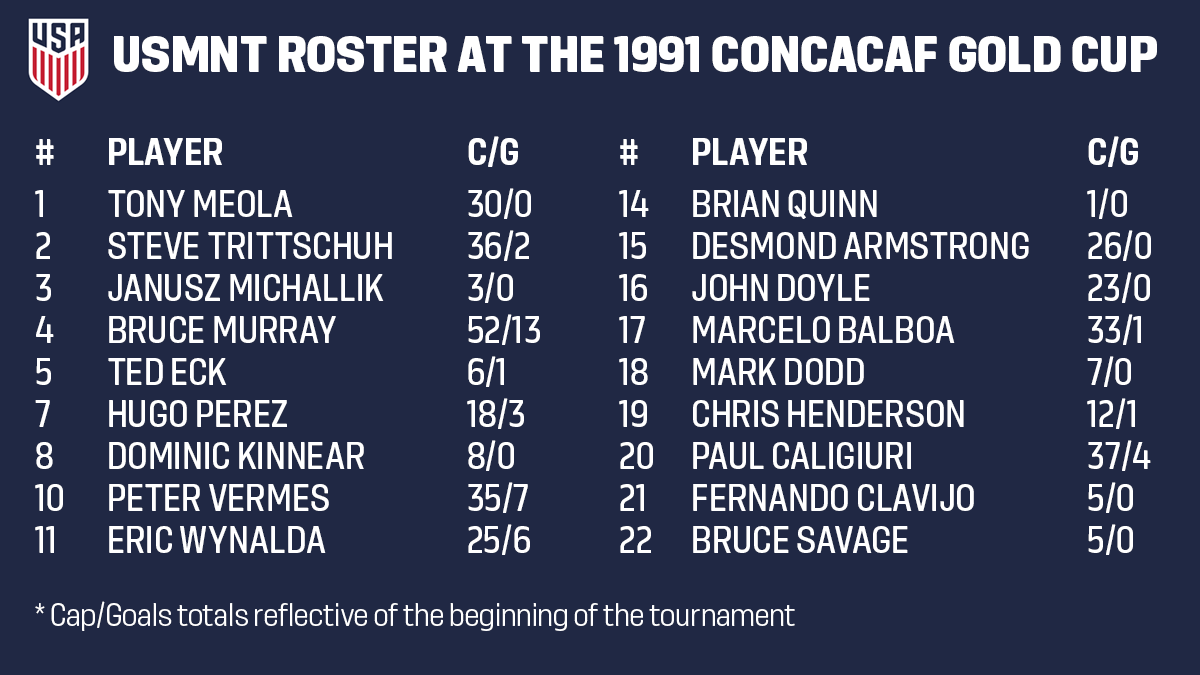 After competing as the youngest team at Italia '90 a year prior with an average age of 23.6, this USA squad was a bit older (25.5 average age), though much wiser.

"We just built confidence as that thing went on," Murray said.

Added forward Peter Vermes, the current Sporting Kansas City head coach: "Prior to that a lot of games were, ‘How do we survive the game?' We really sort of taught ourselves that, 'Hey, we can win. We can win these kinds of games. We can beat these teams.' We don't have to just think that we're trying to compete and just survive the game. That was the turning point."

For all his eccentricities, Milutinovic knew how to prepare a team for top-flight competitions. The Serbian-born coach guided Mexico to a quarterfinal finish at the 1986 World Cup. Under his direction at Italia, Costa Rica became the first Concacaf side to reach the knockout round of a European-hosted World Cup.

For the Gold Cup, he put together a plan and the players executed it well.

"You can say whatever you like about Bora. A lot of people had different opinions about him," forward Eric Wynalda said. "But the difference between the '90 team and the attitude of the '91 team before he took over -- for the first time, not only did he have the confidence that we would be Mexico he gave us a blueprint. 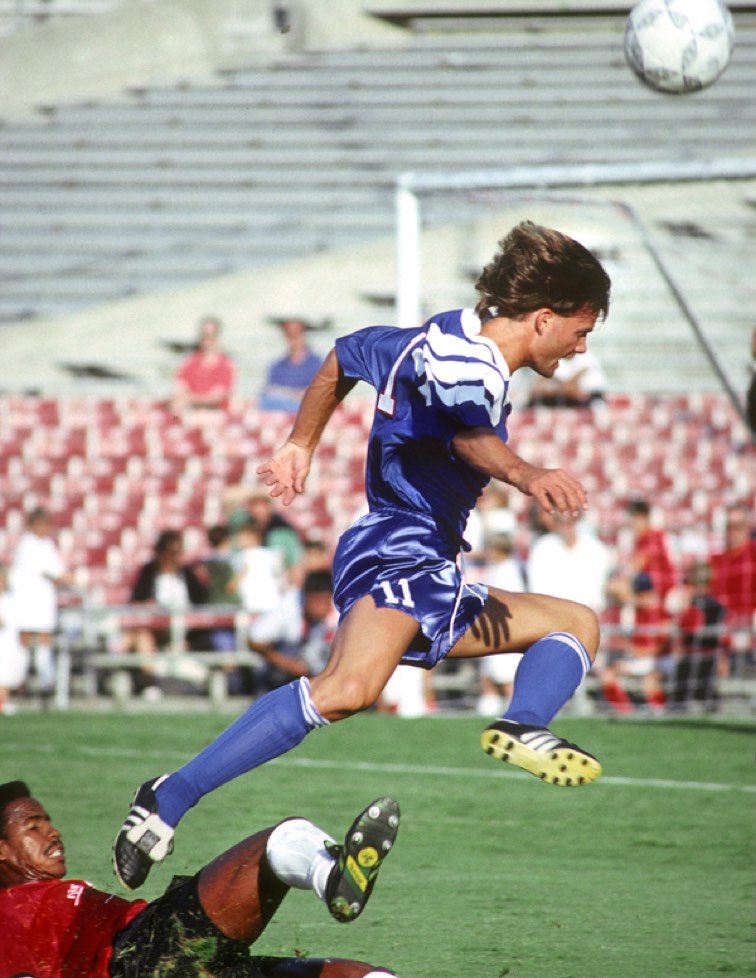 Eric Wynalda during the 1991 Gold Cup Opener vs. Trinidad & Tobago

"Up to that point we're talking about dark horses and Cinderella stories. We were always told that Mexico was better. This was the first time that Bora, said, 'I looked at their roster. This is who their team is. Our team is better, and here's how we're going to beat them.' "

There was plenty of work to be accomplished before meeting Mexico. The Soca Warriors, still feeling the sting of the 1989 U.S. victory that denied them qualification to the World Cup, were the USA's first foes. The late arrival put the Americans behind the eight ball.

"It was ridiculous with 30-40 minutes to get ready to go and try and get ready to play the game," Vermes said. "You're talking about everybody -- the equipment managers, the trainers, everybody."

The Americans started slowly as the Soca Warriors took the lead on Leonson Lewis' 67th-minute goal.

"We almost didn't get out of first gear," Murray said.

"They had some bite in their tackles in that game," Meola said. "They obviously hadn't forgotten about 1989. They were good. They were difficult to breakdown." 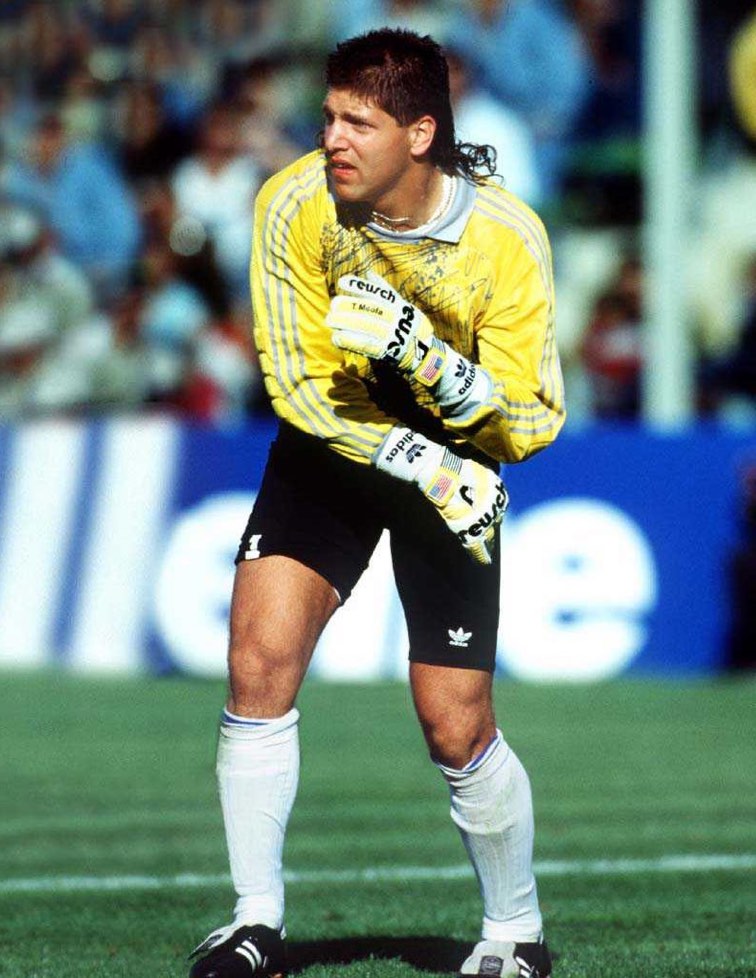 Tony Meola backstopped the USMNT throughout the 1991 Concacaf Gold Cup

With the clock ticking down the USA rallied, first on a Murray equalizer in the 85th minute and a spectacular Marcelo Balboa bicycle two minutes later for a 2-1 comeback victory.

"The one thing that group of guys back then had was a resiliency, and a lot of ways, we were survivalists," Vermes said. "We dealt with a lot of adversity."

"That was incredible, just to get that first result," Murray said.

With their bus problems behind them, the Americans rolled to a 3-0 win over Guatemala on July 1 as Murray (11th minute), Brian Quinn (46th minute), his lone international goal, and Wynalda (52nd minute) found the net.

Quinn, who was a native of Northern Ireland native and became a naturalized U.S. citizen after years playing in the NASL and MISL, made his international debut a month prior.

"I started to develop a trust with Brian Quinn," Wynalda said. "He couldn't run, and he really couldn't cover as much ground as maybe a younger, more dynamic player, but I don't know anybody outside of Dunga [former Brazilian World Cup champion captain] that was better on a first touch and transition pass to break the lines than Brian Quinn."

In a game that had a little bit of everything, the USA survived a wild 3-2 affair with Costa Rica two days later. Vermes had given the Americans a 1-0 lead in the sixth minute before two goals within three minutes (Juan Carlos Arguedas in the 30th minute and Claudio Jara in the 33rd) boosted the Ticos. Hugo Perez equalized via a penalty kick in the 49th minute. Hector Marchena's 59th-minute own goal gave the USMNT a 3-2 victory and the Group B title, setting up a semifinal clash with Mexico.

The schedule was relentless and ridiculous. Teams hardly had time to recover and prepare for the next match. They would play one day, rest the next and resume competing on the third day. Every team had to endure that, although teams that advanced from Group A, which started its run one day prior to Group B, entered the semifinals with an extra day of rest.

"They were coming one after another, every other day," Murray said. "Bora was just an incredible stickler about fitness. I can't tell you how fit that team was."

That day, July 5, Bora's Boys owned Mexico with a historic 2-0 triumph. No one realized at the time that the result that would become the signature score during four consecutive World Cup qualifying wins over El Tri in Columbus Ohio, stretching from 2001 to 2013.

Center back John Doyle connected on one of his three international goals in the 48th minute and Vermes added an insurance tally in the 64th minute.

With the USA nursing that two-goal advantage late in the match the fitness factor became a vital factor.

"The guy across from me was tugging on his shirt in the 70th minute," Murray said. "I was thinking to myself, 'This is the fittest I've ever been so let me just run this guy off the field. I don't care, I'm going to make useless runs.' "

The U.S. performance impressed and influenced the pro-Mexican crowd of 41,103.

"We were knocking the ball around and they were saying ‘Ole!’ like they've done us in the past," Vermes said. “That's when you knew something changed right then and there.” 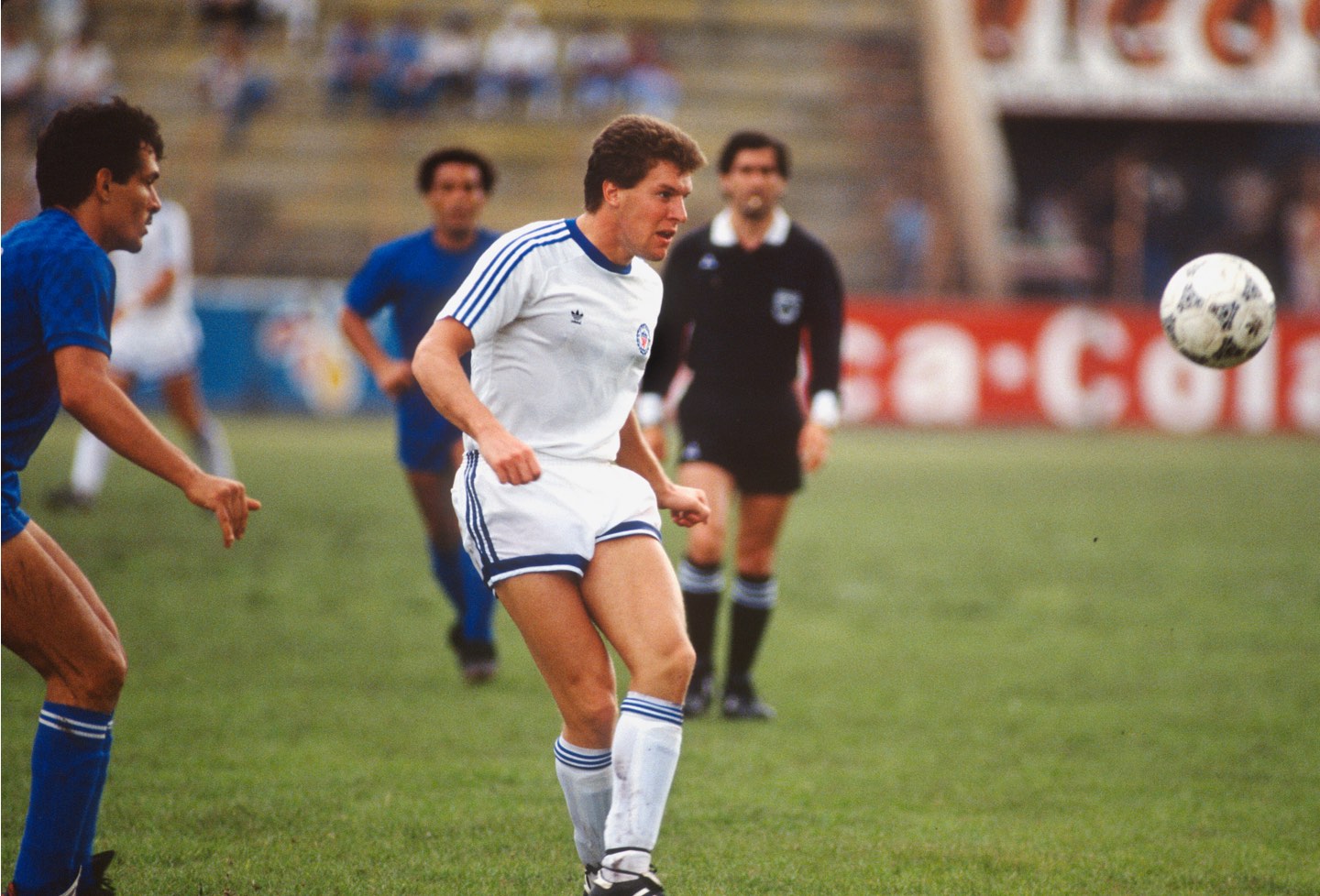 Current Sporting KC head coach Peter Vermes scored in the USMNT’s first “Dos a Cero” victory vs. Mexicon on July 5, 1991 and captained the side to the Gold Cup championship two days later

Murray said: "That was really slaying a dragon because Mexico was big time. The fact that we finally beat Mexico, gave us the belief that we were capable of bigger things."

"He resigned before he even got to the locker room," he said. "We were watching him walk off the field. like, 'I don't know what just happened.' "

"We just knew how hard we had worked for this moment," he added. "But at the same time, the atmosphere in the locker room was ‘hey, next man up, We're ready. Next game, right?’ Everyone we would be disappointed if we didn't win everything." 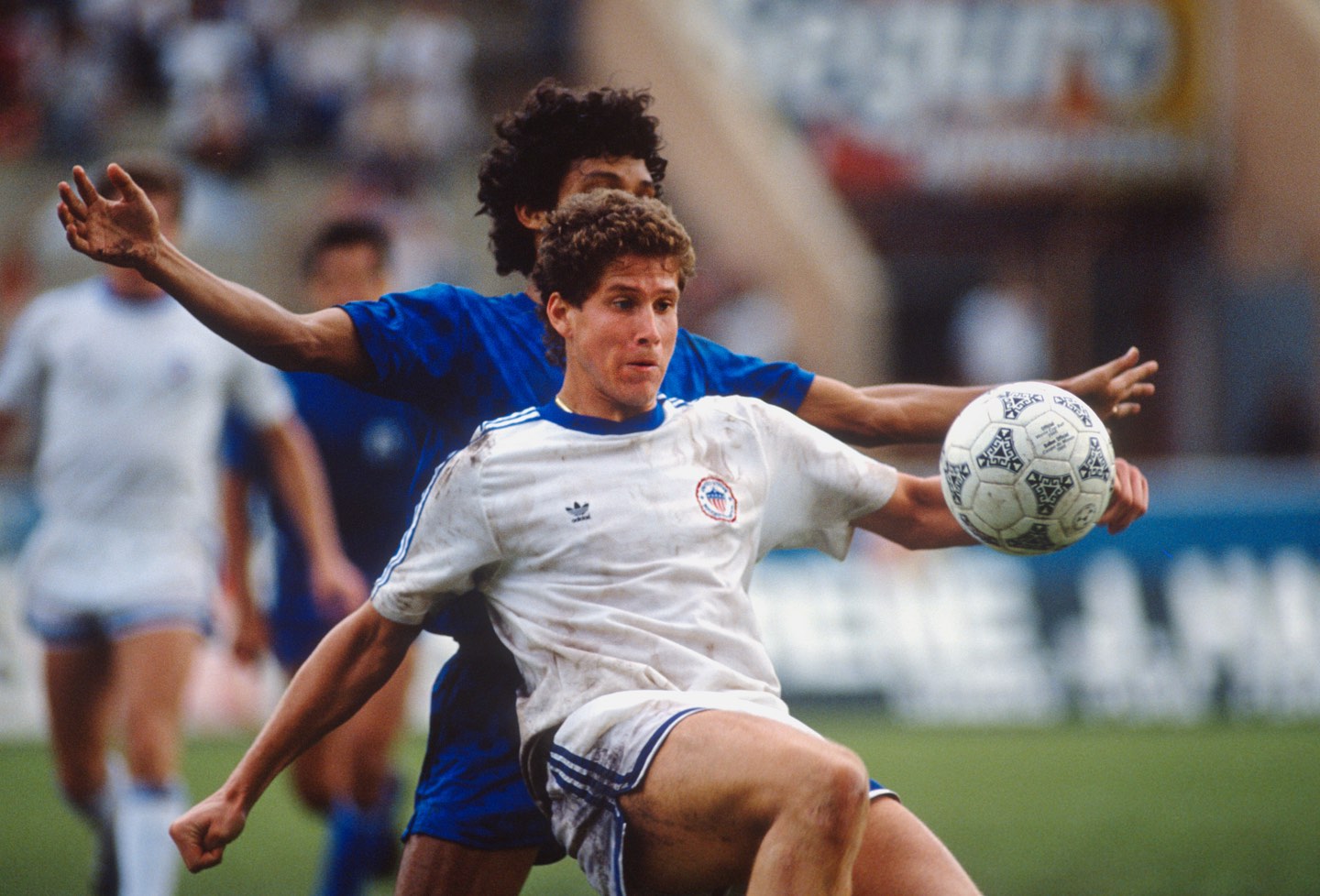 After scoring for the USMNT at the 1990 FIFA World Cup, Bruce Murray registered two goals during the 1991 Gold Cup Championship run

Thirty years later, Wynalda said that he needed to watch that game again. "It was absolutely terrific," he remembered.

Meola suffered a bad charley horse in the first half, and it worsened. He rehabbed with ice and massage. "There was no way I was going to allow Bora take me out for the final," he said

Given the condensed schedule, the USMNT had a day to recover and prepare for a determined Honduran side.

"Honduras was just like they are now," Vermes said. "They were tough physically but they're also mentally tough. They were very focused. They were a really good team."

The less said about the final, the better. Two exhausted sides were pitted against each other, the USA playing its fifth game over nine days.

"It was almost like we were all playing for penalties," Murray said. "It just turned into a very slow, Boring, poorly played game. Concacaf did a great job, but I wish the players got at least three or four days in between games."

A crowd of 39,873 and two teams endured a 120-minute scoreless draw before penalty kicks decided matters. Even that tie-breaker needed three sudden-death rounds.

After five attempts by each team, the shootout was deadlocked at 2-2. Balboa and Paul Caligiuri had converted for the USA while Vermes, Perez and Ted Eck missed their tries. Sudden death went three rounds as Quinn missed his attempt, but Dominic Kinnear scored and Fernando Clavijo, then a Major Indoor Soccer League standout, drilled his shot to the left of goalkeeper Belarmino Rivera on the USA's eighth attempt. Carlos Espinoza lofted Honduras' final attempt over the crossbar. Meola made three saves in the shootout.

"I think there were three occasions in that one, maybe two, that if they scored, they won," said Meola, who added that he was proud he never lost a penalty-kick shootout.

Since then, the USMNT has won six Gold Cups. Gregg Berhalter’s side will try to make it seven starting on July 11 in Kansas City. In the past 30 years the competition has grown from an eight-team tournament hosted over the course of two weeks in one stadium to the current 16-team edition which is played throughout the United States over the course of a month. 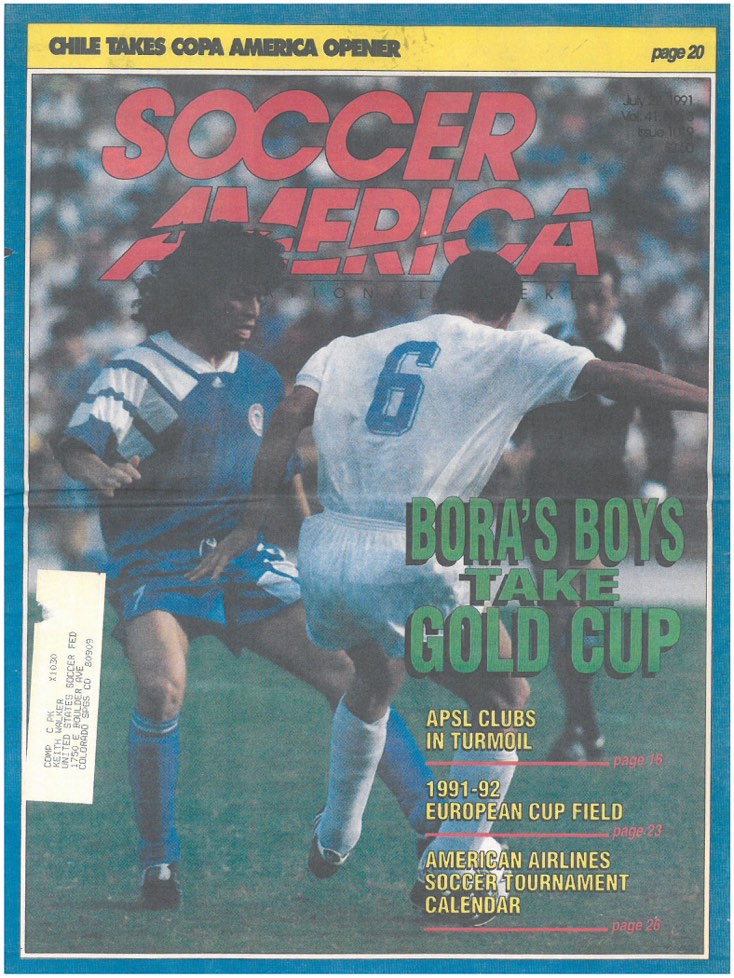 The triumph served as the USMNT’s turning point in Concacaf.

"It changes you, sort of that humble confidence that you step on the field with," Vermes said. "That changes everything. You get a bit of a swagger that you never had before."