CHICAGO (Aug. 27, 2021) – The first installment of the Only Forward Art Series was released today as part of U.S. Soccer’s “Countdown to World Cup Qualifying” in advance of the U.S. Men’s National Team kicking off its journey to the 2022 FIFA World Cup in Qatar.

The first piece of art, designed by Nashville artist Kevin Bongang, will be the centerpiece of a variety of activations around U.S. Men’s National Team vs. Canada, presented by Volkswagen, the team’s first home World Cup Qualifying match at Nissan Stadium on Sunday, Sept. 5 at 7 p.m. ET live on FS1, UniMas and TUDN. 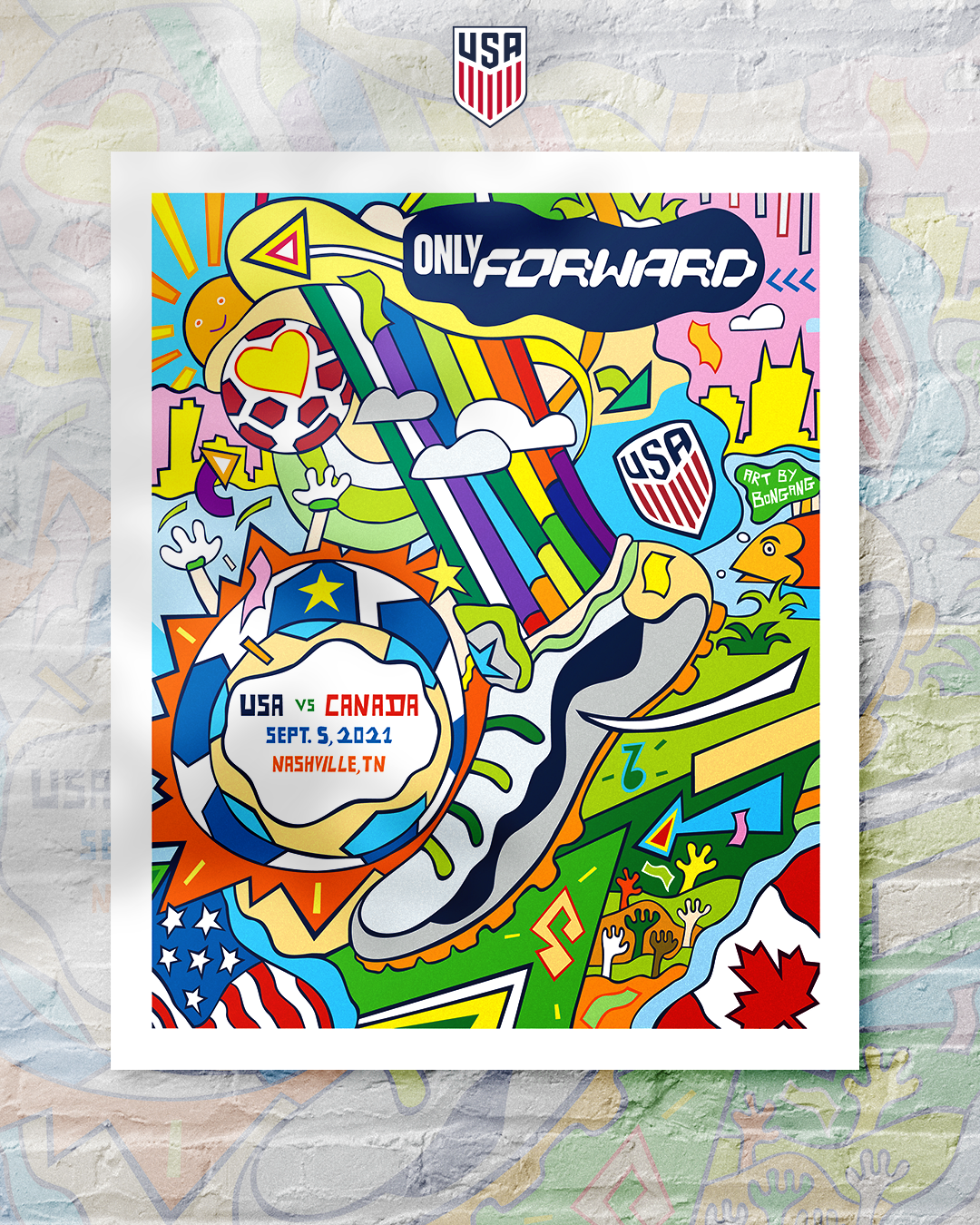 Part of U.S. Soccer’s “Only Forward / Solo Pa’lante” campaign, the Only Forward Art Series will feature installments in all upcoming home World Cup Qualifying markets, including Austin, Columbus and Cincinnati. Artists in each local market will create a bespoke piece of art showcasing the spirit and energy of the U.S. Men’s National Team, and serve as a celebration of diversity and inclusion within the sport and the local community. Additional artists will be announced at a later date.

“Only Forward/ Solo Pa’lante” is a rallying cry for a young, diverse and global-minded Men’s National Team that is humble yet resilient—as it looks to tackle the challenge of World Cup Qualifying during the next eight months. After an action-packed summer in which the deep U.S. player pool responded to adversity on and off the field and proved itself with two regional championship trophies, the USMNT is ready to show the world that they are prepared to change the way the world views American soccer.

"An honor is an understatement on how grateful I was to find out I would be working with U.S. Soccer to create this art,” said Bongang. “Soccer has always been a big part of my life growing up in Cameroon, West Africa. The ‘Only Forward’ campaign represents moving forward in unity and togetherness, while striving to conquer all adversities. I wanted the illustration to be colorful and playful, which like this campaign is inspired by the youth. I wanted to create a fun, functional, organic piece that tells the story of what’s to come in the USA vs. Canada game in Nashville.”

In addition to the NTWRK product drop, Bongang’s art will be featured at Chauvet Arts Nashville as part of the city’s First Saturday Art Crawl taking place on Saturday, September 4 from 6-9pm CT. The Art Crawl spans across the downtown area with art galleries hosting receptions and art openings. Chauvet Arts is located in a historic building at 215 Rep. John Lewis Way N with over 4,000 square feet in the heart of Downtown Nashville.

Finally, all fans attending the World Cup Qualifier in Nashville on Sept. 5 will have the ability to download an NFT of the art, the result of a collaboration between U.S. Soccer and long-standing partner Panini America. Only fans who attend the match will have access to the NFT via Panini’s NFT Blockchain by entering their unique code to redeem the Only Forward Art Series NFT asset.

Bongang was born in Cameroon, West Africa, and raised in Savannah, Georgia, before moving to Nashville, Tenn. There, he was able to hone in on his signature style awash in bold, fun colors, swirling lines, and whimsical imagery. The result is organic, functional and cohesive pieces of art.

About For Soccer Ventures

A first of its kind digital experience, FootyCon will focus on uniting the diverse communities of the sport of soccer through art, fashion, and culture. FootyCon will debut on NTWRK as a one-day digital festival on Wednesday, Nov. 10.