We kick things off by looking at some of the previous encounters at El Salvador.


While the USMNT hasn't faced Los Cuscatlecos too many times in FIFA World Cup qualifying, there have been a few interesting away confrontations.

Here's a quick look at three of those encounters: 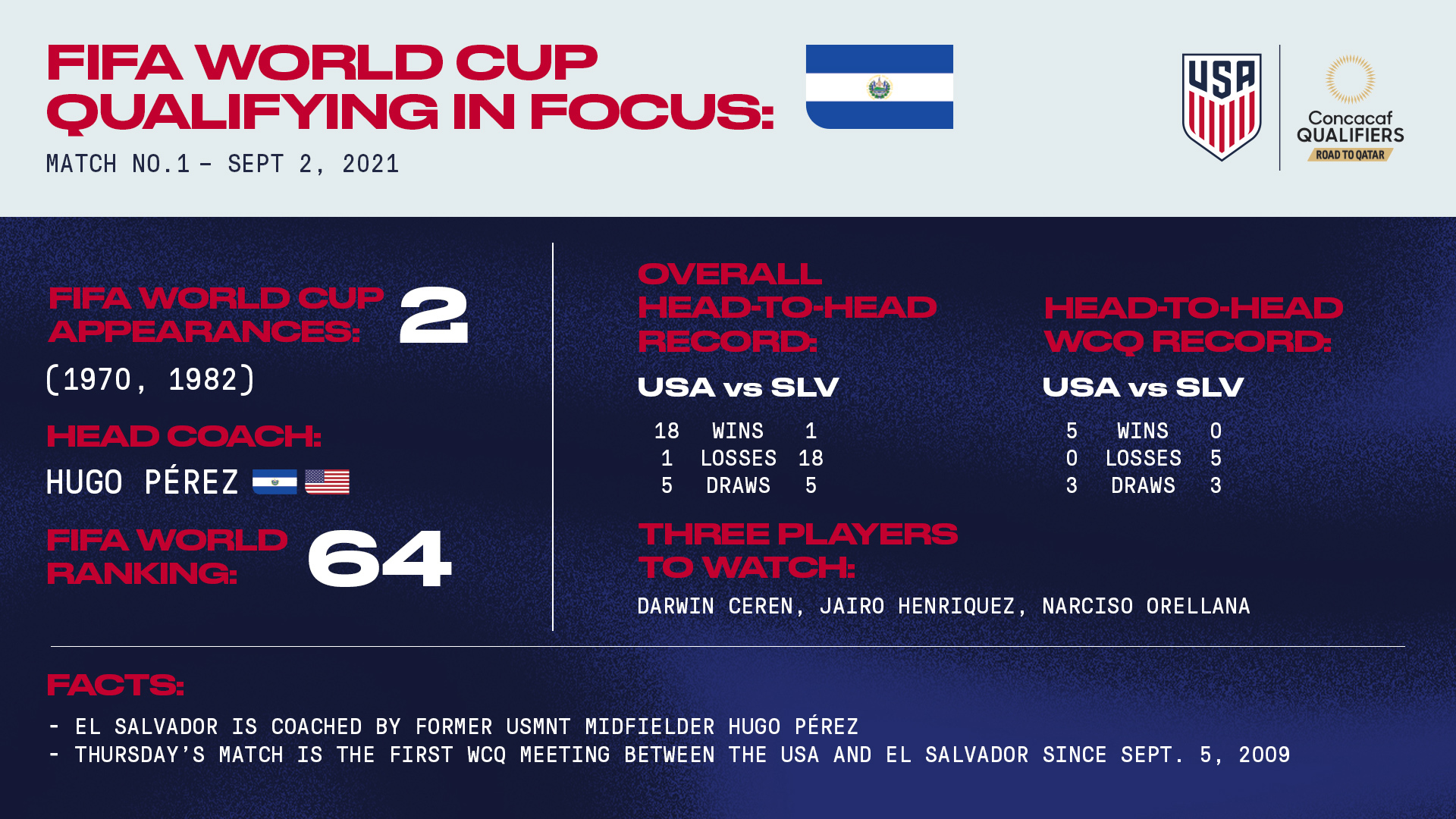 While scoring twice in a 4-2 Olympic qualifying win in San Salvador on Oct. 18, 1987, Perez was soundly booed by the crowd in his native country. Born in Morazán, El Salvador, Perez and his family moved to the USA when he was nine.

He had to wait almost a year to exact his revenge, although there were several obstacles. 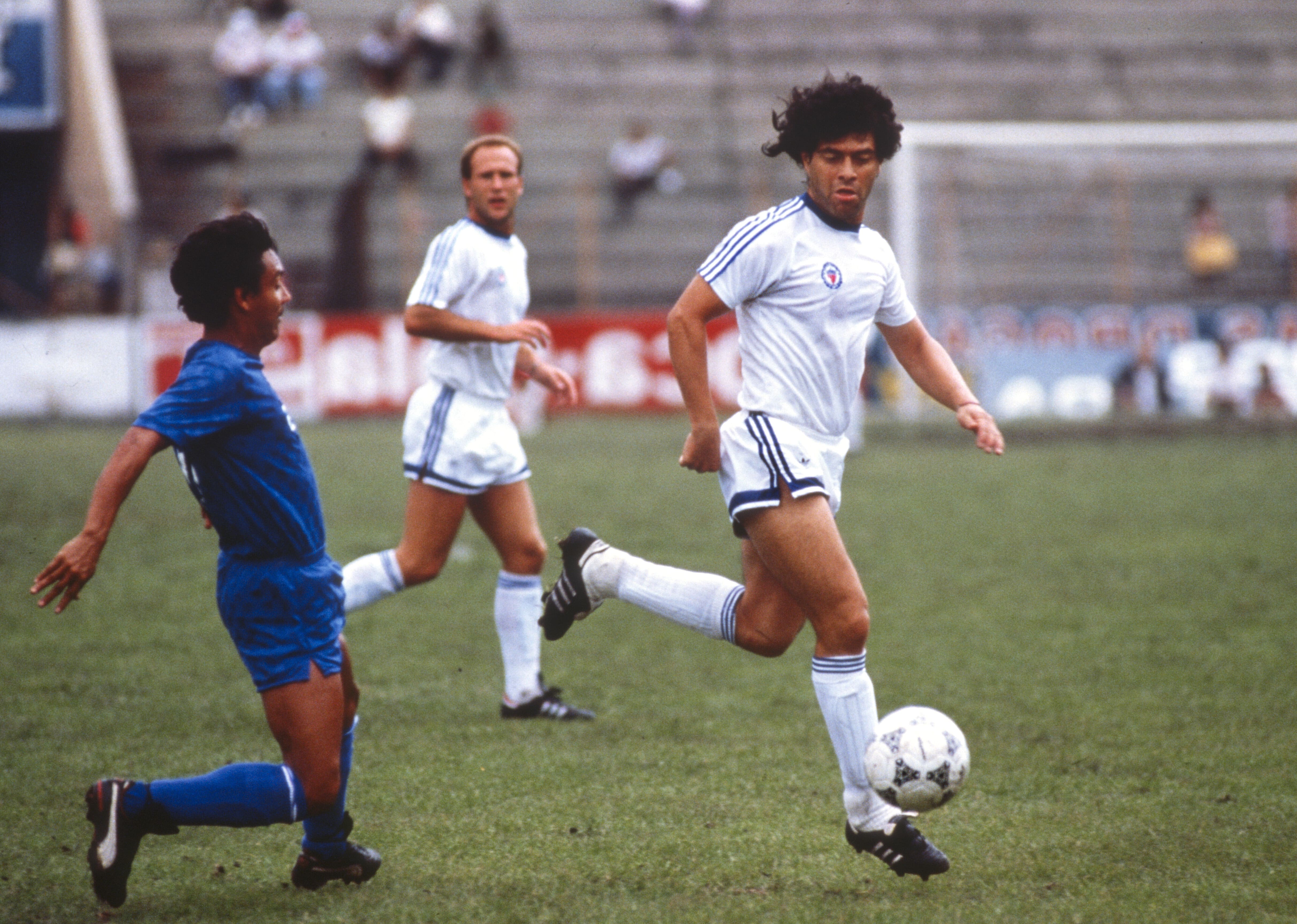 First was the pitch. Thanks to several days of rain, the field was in horrible shape. Yet the USA prevailed on the antithesis of a textbook goal by Perez in the 62nd minute. John Harkes' 23-yard free kick was saved by goalkeeper Carlos Rivera. The rebound came to Peter Vermes, whose six-yard attempt bounced off Rivera. Perez, in the right place at the right time, headed the ball just inside the right post.

It might have been the ugliest goal he scored for the USA, but it was incredibly meaningful.

On a macro level, the goal and result propelled the USA to its first World Cup berth in 40 years. On a personal level, the goal made Perez the first USMNT player to score against the country of his birth. His 78-year-old grandfather Antonio made a seven-hour drive from El Salvador to see it all in person.

"I've been looking for that goal for months," Perez said following the match. "I wanted to play well [for my grandfather]."

Just getting this game played was difficult enough. The match originally was scheduled for San Salvador on July 9 but was postponed indefinitely as FIFA looked for a neutral site after unruly fans halted an earlier qualifying match against Costa Rica in the waning minutes.

Tegucigalpa was selected as the venue, although the Americans had to overcome one strange incident on game day. Goalkeeper Tony Meola, 20, who was to become the second youngest goalkeeper to perform for the USA in a World Cup qualifier, returned from a team meeting hours before kickoff. 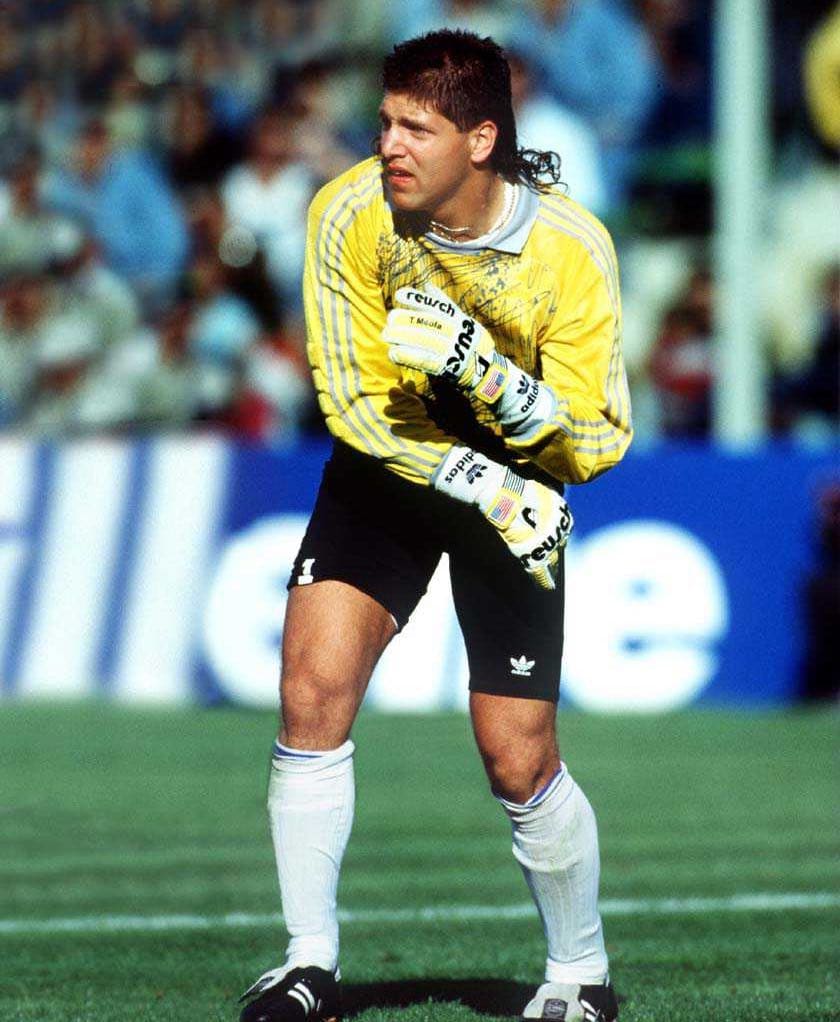 “We were going back up to our rooms to gather our stuff,” he said. “We had maybe a half hour to get on the bus, and about 10 or 12 of us got stuck in the elevator. Of course, the first thought was they were doing this because Honduras is another Central American country in Concacaf. We had to climb through the shaft of the elevator up top. For someone who was a little bit claustrophobic, this took forever. We were late getting to the stadium."

It was a good thing that Meola got his bearings as he produced a brilliant diving save on a free kick late in the opening half.

The win was just the USMNT’s second qualifying victory all-time in Central America and the first since a 1-0 win at Honduras, also in Tegucigalpa on March 17, 1965.

Nearly 32 years after playing hero for the USMNT, Hugo Perez will guide El Salvador against the United States in Thursday’s qualifying opener.

Faced with a two-goal deficit entering the final 15 minutes, the USMNT pulled off an impressive two-goal rally behind Jozy Altidore and Frankie Hejduk that quieted a boisterous crowd of 30,500 at Estadio Cuscatlan. 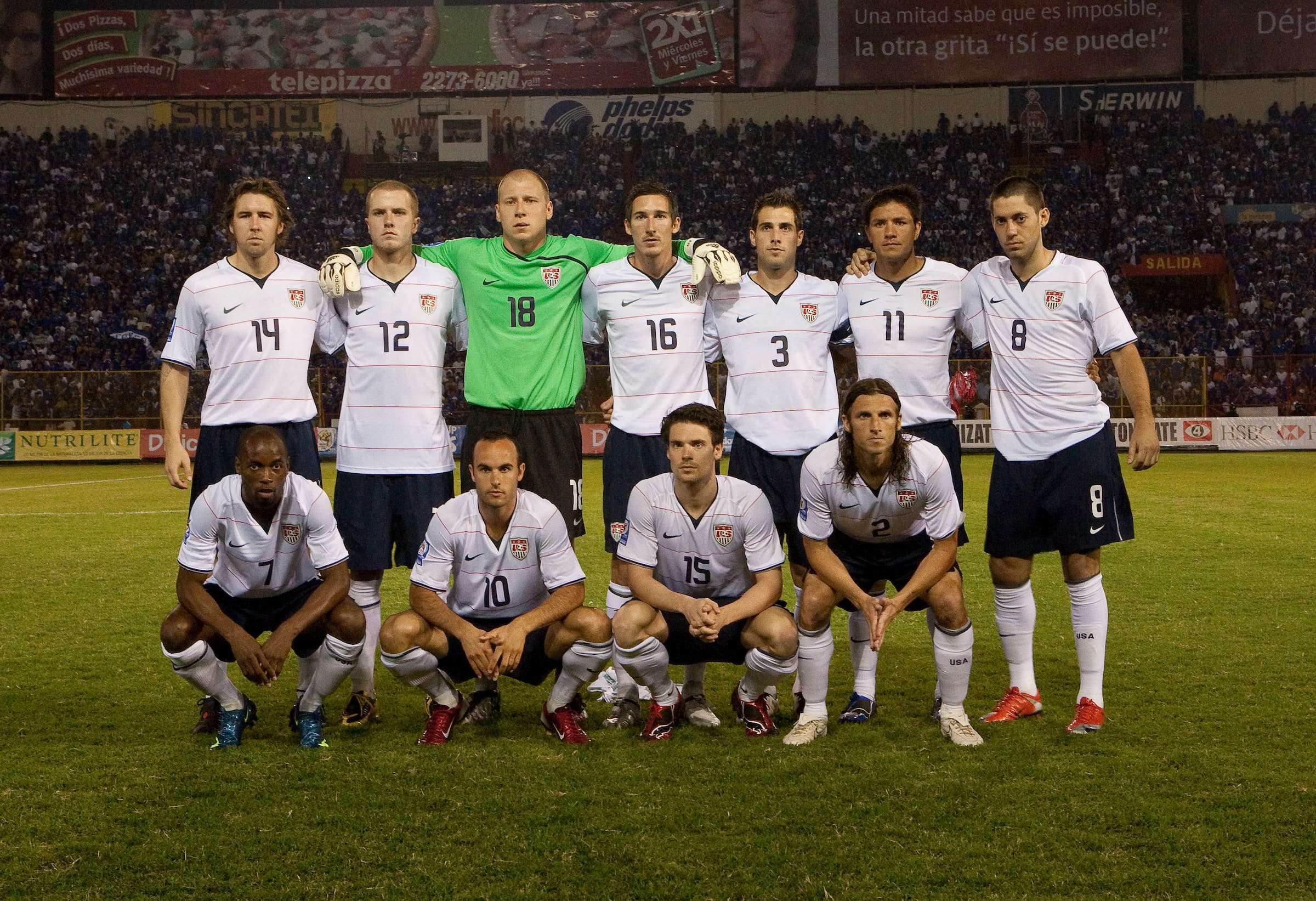 The hosts grabbed a 15th-minute lead on Eliseo Quintanilla's goal, taking advantage of a giveaway by DaMarcus Beasley. Quintanilla took a pass from Osael Romero and beat goalkeeper Brad Guzan as he slid the ball inside the far post. Guzan started in place of regular Tim Howard, who was serving a yellow-card suspension.

Things looked grim for the USA in the 72nd minute as Rodolfo Zelaya maneuvered past Beasley on the wing and crossed the ball to Castillo at the top of the penalty area. Cristian Castillo then headed the ball in on one bounce for a two-goal advantage.

Galvanized, Bob Bradley’s side went on to pull off one of the team’s most memorable away rallies. Altidore, who came on in the 61st minute, scored on a header from three yards out off a Hejduk cross past backup goalkeeper Juan Jose Gomez in the 77th minute. Gomez had replaced injured starter Miguel Montes moments earlier.

Hejduk, who deputized at right back for the second-straight match while regular Steve Cherundolo recovered from a hip injury, struck for the equalizer in the 88th minute. The unmarked defender headed the ball home after Landon Donovan's corner kick deflected off El Salvador defender Marvin Gonzalez. 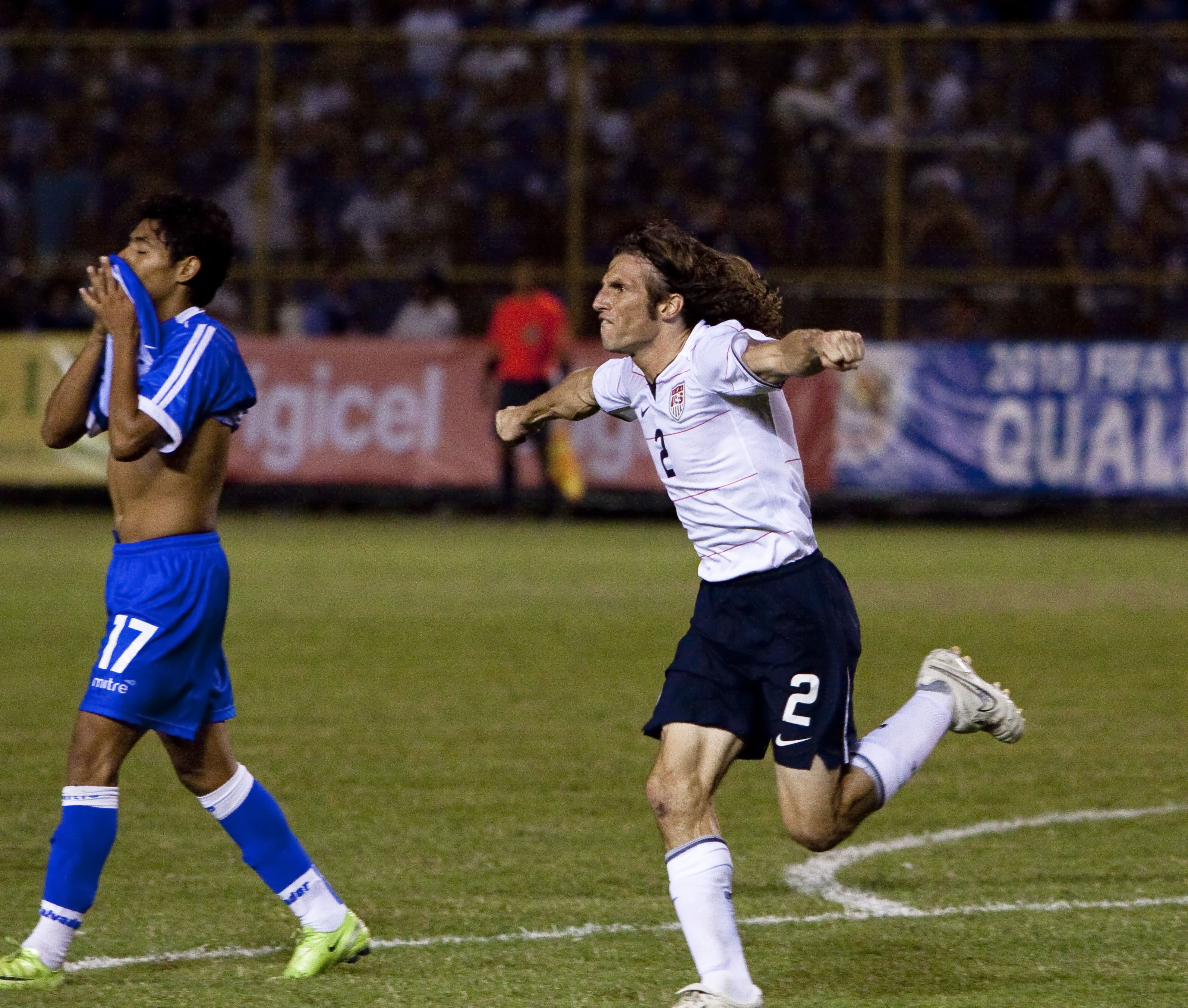 Brian Ching might have experienced the most frustrating game. He found the back of the net in the 43rd minute, but as many as five teammates might have been offside on the play. Seven minutes into second-half stoppage time, the U.S. forward attempted a spectacular game-winner on a bicycle kick but defender Mardoqueo Henriquez denied his bid with 11th-hour heroics.

The result gave the USA (1-0-1, 4 points) a vital road point while the El Salvador played to their second home draw in as many matches in the Concacaf Hexagonal.

What a debut for Eddie Johnson, who scored the insurance goal four minutes into his first USMNT appearance to help secure a 2-0 Semifinal Round World Cup Qualifying victory before 20,000 spectators at Estadio Cuscatlan in San Salvador.

It took a veteran forward Brian McBride to put the Americans on the scoreboard in the 29th minute. DaMarcus Beasley's throw-in on the left side to Kerry Zavagnin started the scoring sequence in the attacking third. Zavagnin found McBride, who drilled a hard shot into the right side of the net. 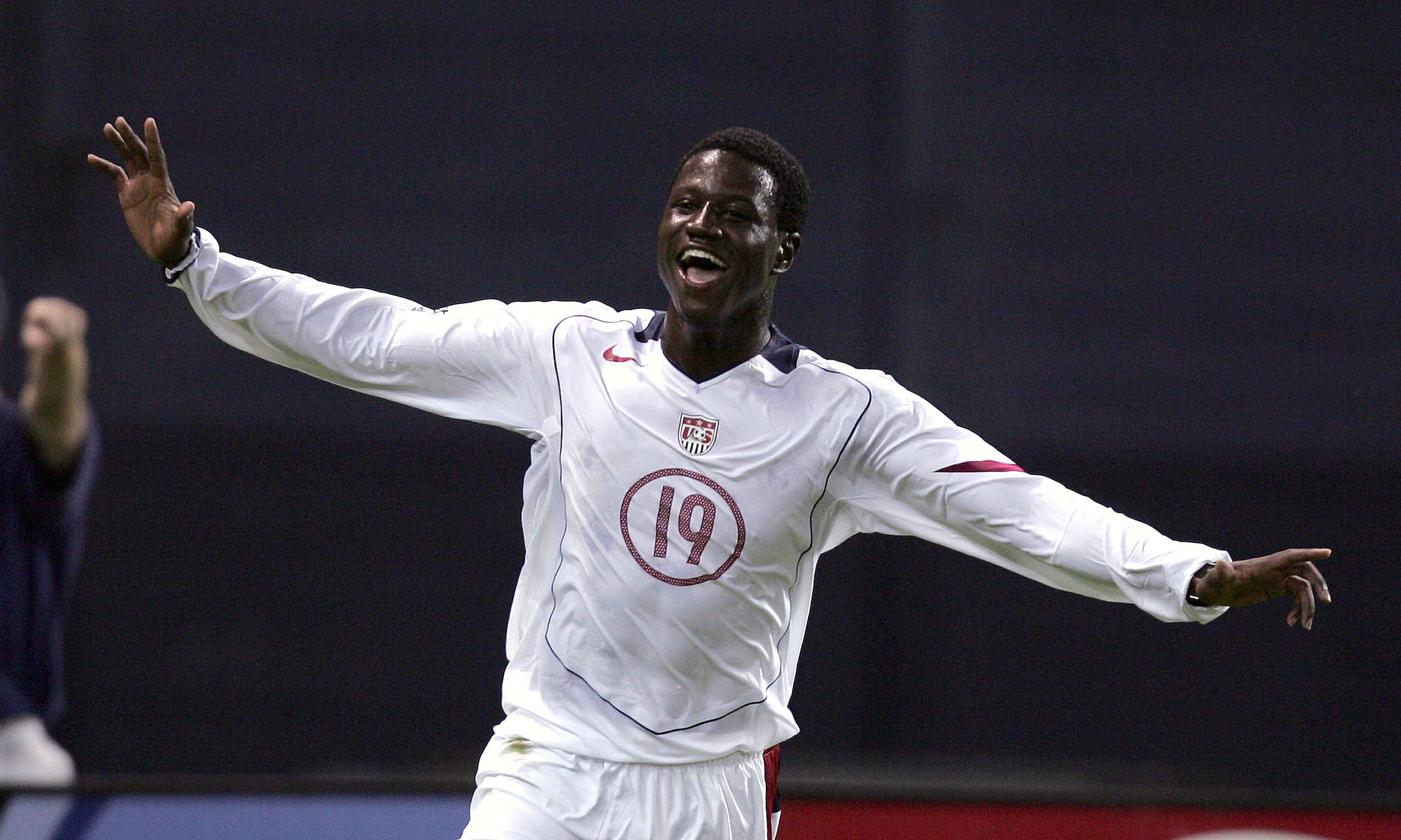 It was McBride's 26th international goal and seventh in six matches against El Salvador – the most of any USMNT player.

"We knew we wanted to come out and score early against them," said McBride, who is the current USMNT General Manager.

The goal took the enthusiastic Salvadoran crowd out of the match.

Johnson, who had replaced McBride in the 71st minute, put the nail in the proverbial coffin four minutes later as he tapped home a Landon Donovan feed for a two-goal margin.


Johnson became the seventh USMNT player – and first since Miro Rys in 1976 – to debut in a World Cup qualifier and score a goal. No player has achieved the feat since.

"We played hard, and we played well," U.S. head coach Bruce Arena said. "This was a very important game for us, and it means that we've gone three road games without a loss. That's an accomplishment.

"We were much more solid in the second half. Obviously, I think we could have gotten more goals. You don't win that many games on the road in World Cup qualifying, so I can't complain."

The result, only the fourth time the USA had won a qualifier in Central America in 16 matches, solidified the team's Group A lead and set them up to clinch passage to the final round with a 6-0 against Panama four days later in Washington, D.C.