CHICAGO (Oct. 4, 2021)-- As the U.S. Men’s National Team picks up its World Cup qualifying campaign in Austin, Texas this week, the Only Forward Art Series continues with a special piece from local artist Phoebe “FeeBee” Joynt.

The artwork will serve as the centerpiece for a variety of activations around USA-Jamaica, an important step on the road to Qatar 2022 and the USMNT’s first World Cup qualifying match to be held in Texas. Kickoff from Q2 Stadium in Austin is set for 7:30 p.m. ET on ESPN2, Univision and TUDN. Pregame coverage on Univision and TUDN will begin at 7 p.m. ET. 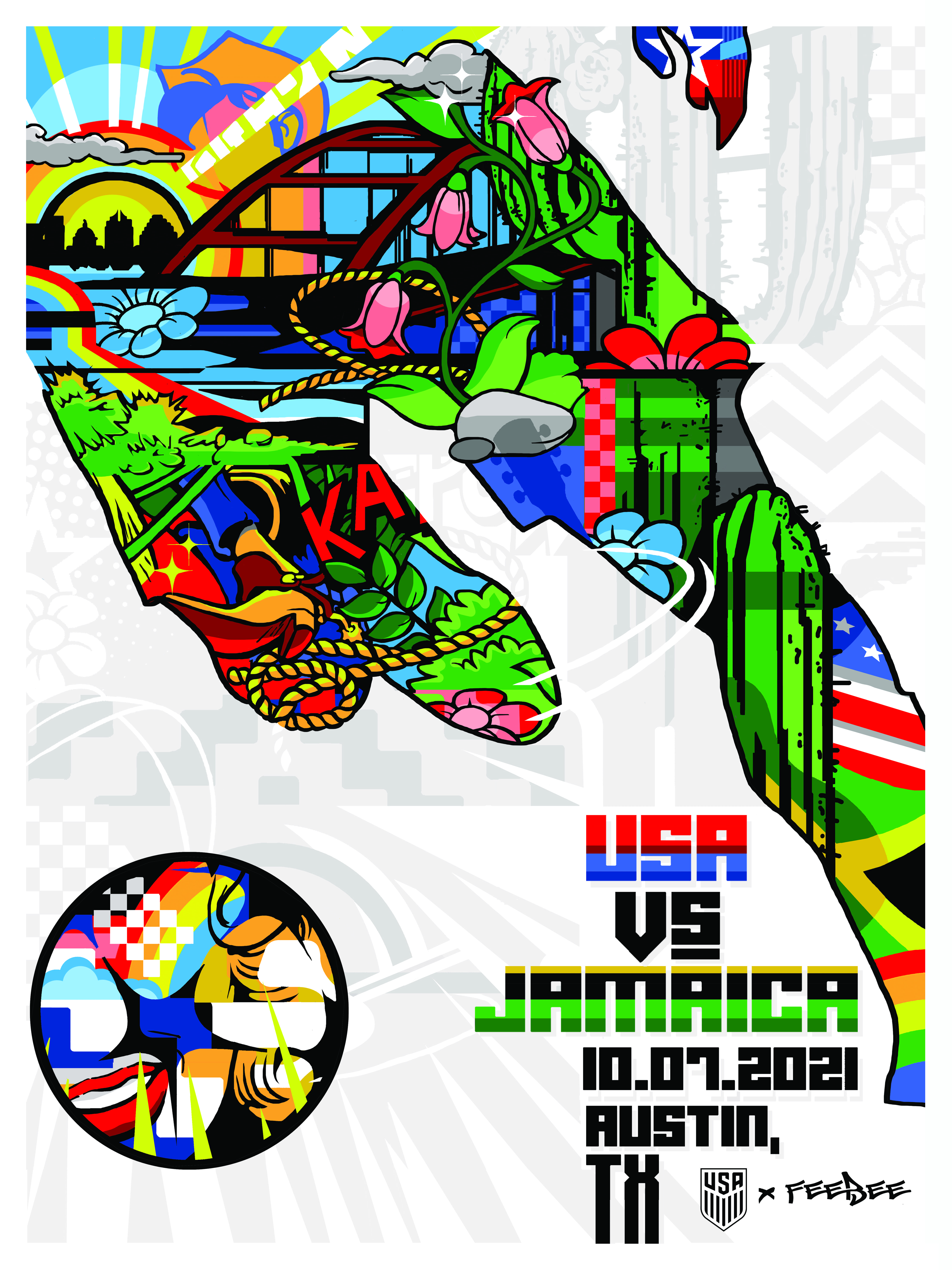 The art series brings the spirit of the “Only Forward” campaign to life, highlighting the young, diverse and global-minded nature of the resilient USMNT as it looks to tackle the challenge of World Cup qualifying.

"I was thrilled to work with FootyCon and U.S. Soccer,” FeeBee said. “I saw the piece from Kevin (Bongang) in Nashville and was excited to take on the challenge of continuing the story of the ‘Only Forward’ campaign through my art. I've always had a passion for soccer after being introduced to the sport by my dad as a young child and I'm so excited to create a piece inspired by the game that also references and is in dialogue with the amazing city of Austin that I call home."

Fans attending the World Cup qualifying match in Austin on Oct. 7 will have the opportunity to download an NFT of the art, thanks to a collaboration between U.S. Soccer and longtime partner Panini America. Fans will be able to use a QR code in their cupholder for access to Panini’s NFT Blockchain to redeem their Only Forward Art Series NFT asset.

The artwork will debut for purchase exclusively on the NTWRK app on Tuesday, Oct. 5 at 3:30 p.m. ET as a result of a collaboration with FootyCon and For Soccer Ventures. Fans will be able to buy the art as a poster or as a limited edition barbeque apron while getting access to exclusive content featuring FeeBee.

In addition to the product drop on NTWRK, posters of FeeBee’s art will be available for purchase locally at the downtown Austin FC store (506 Congress Avenue) and the mobile U.S. Soccer Fan Studio during the U.S. Soccer x Budweiser Kickoff Party, set for 7 p.m. ET on Oct. 6 at Lustre Pearl Rainey (94 Rainey Street).

Based in Austin, FeeBee is an artist, designer and muralist known for incorporating modern, urban and street art elements into her ever-developing pop art style. Born in upstate New York, she attended the Pratt Institute in New York City and spent time living in Brooklyn, which influenced her background of street art and illustration. She strives to create art that’s beautiful, eye-catching and exciting for the viewer.

The Only Forward Art Series will feature installments in all home World Cup qualifying host cities as artists in each local market will create a bespoke piece of art that showcases the spirit and energy of the U.S. Men’s National Team and serves as a celebration of diversity and inclusion within the sport and the local community. In celebration of Hispanic Heritage Month, Cuban-American artist ABSTRK will create the artwork for USA-Costa Rica, presented by Volkswagen, on Oct. 13 in Columbus, Ohio, while Mexican-American artist Sentrock will design the art for USA-Mexico, presented by Allstate, on Nov. 12 in Cincinnati.

ABOUT FOR SOCCER VENTURES

A first of its kind digital experience, FootyCon will focus on uniting the diverse communities of the sport of soccer through art, fashion, and culture. FootyCon will debut on NTWRK as a one-day digital festival on Wednesday, Nov. 10.