Looking back on memorable USA-Jamaica World Cup Qualifiers from 1988, 2001 and 2012
Michael LewisOctober 4 2021
Featured

When the United States welcomes Jamaica to Q2 Stadium in Austin, Texas on Oct. 7, it will mark the seventh time the teams will meet on U.S. soil in FIFA World Cup qualifying.

The U.S. Men's National Team is unbeaten against the Reggae Boyz with a 4-0-2 home record and 5-1-6 overall in qualifying.

Here are three memorable home encounters between the USA and Jamaica:

Talk about the pressure.

Only 40 days after the Americans won the right to host the 1994 FIFA World Cup, they faced elimination from the 1990 competition.

The U.S., which automatically secured a berth in the 1994 tournament when it was named host by FIFA on July 4, 1988, needed a victory against Jamaica in St. Louis to advance to the final round of five teams. The top two teams from that round would earn a spot at Italia '90.

After the USMNT played Jamaica to a scoreless tie on July 24 in Kingston in the first leg of the home-and-home series, a draw other than a 0-0 result would bounce the U.S. (in qualifying, away goals were counted double if the aggregate goals were tied).

"The whole world is looking at us now because we are the host team," U.S. defender Brian Bliss said at the time. "The pressure definitely has increased. Before, we were not expected to win a game. Now everybody is looking at us to be a dominant team, at least in the Concacaf region."

With that added pressure, the U.S. scored four goals in the second half to break a 1-1 tie and record an emphatic 5-1 victory.

"This was the most important game we've played so far," said forward Frank Klopas, who bagged a brace. "If we lose the game, there is no international soccer in the United States for the next three years."

After Bliss had given the U.S. a 1-0 lead in the 18th minute, the Jamaicans equalized off a goal by Alton Sterling in the 54th minute. Some 14 minutes later came the play that changed the direction of the match when midfielder Hugo Perez, who came on for the ailing Mike Windischmann at the half, was tripped in the penalty area by defender Dave Brooks.

On the ensuing penalty kick Perez booted it to the right of goalkeeper Paul Campbell for a 2-1 lead.

"The ball goes in, that's it. They're finished," U.S. captain Rick Davis said. "They were a completely different team."

The U.S. was not finished. In the 76th minute, Klopas converted a short pass from substitute Bruce Murray. Two minutes later Murray crossed the ball to Paul Krumpe, who headed it in for a three-goal advantage. Klopas closed out the scoring in the 86th minute.

"I am very delighted that we won," head coach Lothar Osiander said. "It means we can continue. I am totally confident that we will make the last two teams of the competition. It means in the future we will have a competitive team in 1994."

The win sent the USA on its way to qualification for the 1990 FIFA World Cup.

Only four days after suffering a 2-1 defeat to the Reggae Boyz in Kingston, Jamaica, a U.S. side with its backs against the wall rebounded with a 1-0 win on the 11th anniversary of 9/11 in Columbus, Ohio.

"It wasn't our best performance," Gomez said. "We had to set forth and fly today. It wasn't always pretty, but I think we did it very well." 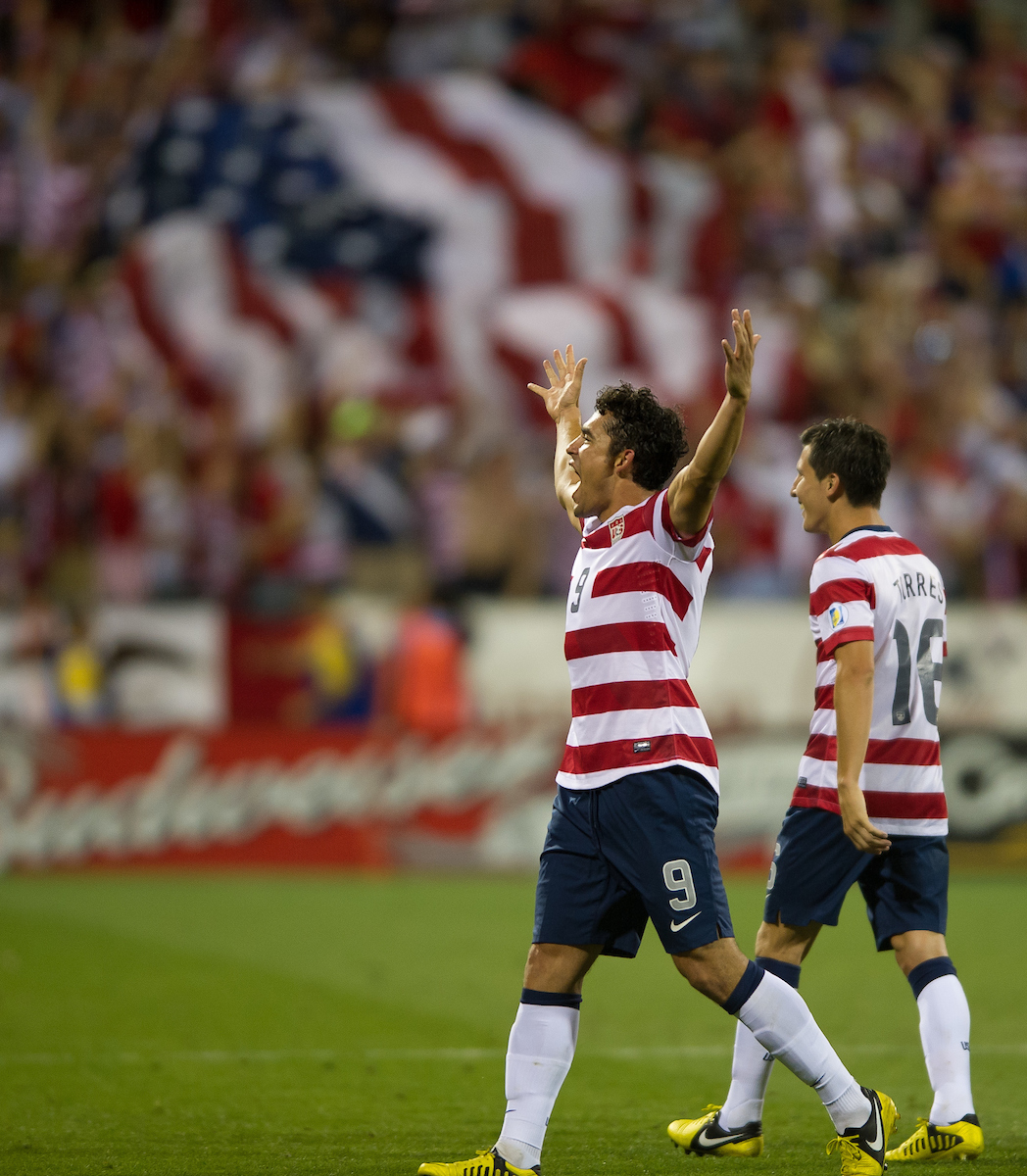 In response to the loss in Kingston, U.S. head coach Jurgen Klinsmann made five changes to the starting lineup. He brought in defenders Carlos Bocanegra, Steve Cherundolo and Fabian Johnson and midfielders Graham Zusi and Jose Torres for defenders Clarence Goodson (serving a yellow card suspension) and Michael Parkhurst and midfielders Maurice Edu and Kyle Beckerman, and forward Jozy Altidore.

The Americans did everything but score in the opening 45 minutes. They enjoyed a huge possession advantage as Dwayne Miller made several key stops and was aided by the woodwork.

Gomez broke the ice with a goal off a free kick 10 minutes into the second half.

Rodolph Austin, one of the Jamaican heroes in its Kingston win, made an ill-advised foul on Clint Dempsey 28 yards out. Gomez then curled a right-footed shot toward the upper right corner. Miller got a hand on the ball but deflected it into the net for Gomez's fifth international goal and second in that qualifying campaign.

"That's my distance," Gomez said. "I feel comfortable on the ball on free kicks. Thankfully, coach had confidence in me and so did my teammates. I struck it and it went in. So, I'm fortunate it happened."

A night prior to the match, several New York City firefighters spot to the team about what transpired at the World Trade Center on Sept. 11, 2001.

"Everyone was aware," USMNT head coach Jurgen Klinsmann said. "We all knew that was a very special day. The players were outstanding on how they handled it."

Entering the penultimate Concacaf Hexagonal contest, the odds were long that the Americans (4-3-1; 13 pts.) could book a spot to in its fourth consecutive World Cup that day. They were struggling following a three-game losing streak and needed a precise set of results from all three matches. Along with a U.S. victory against Jamaica, the team needed a draw in the Costa Rica-Mexico match in San Jose, and to have Trinidad & Tobago – which had one point in the Hex through eight games - upset host Honduras. 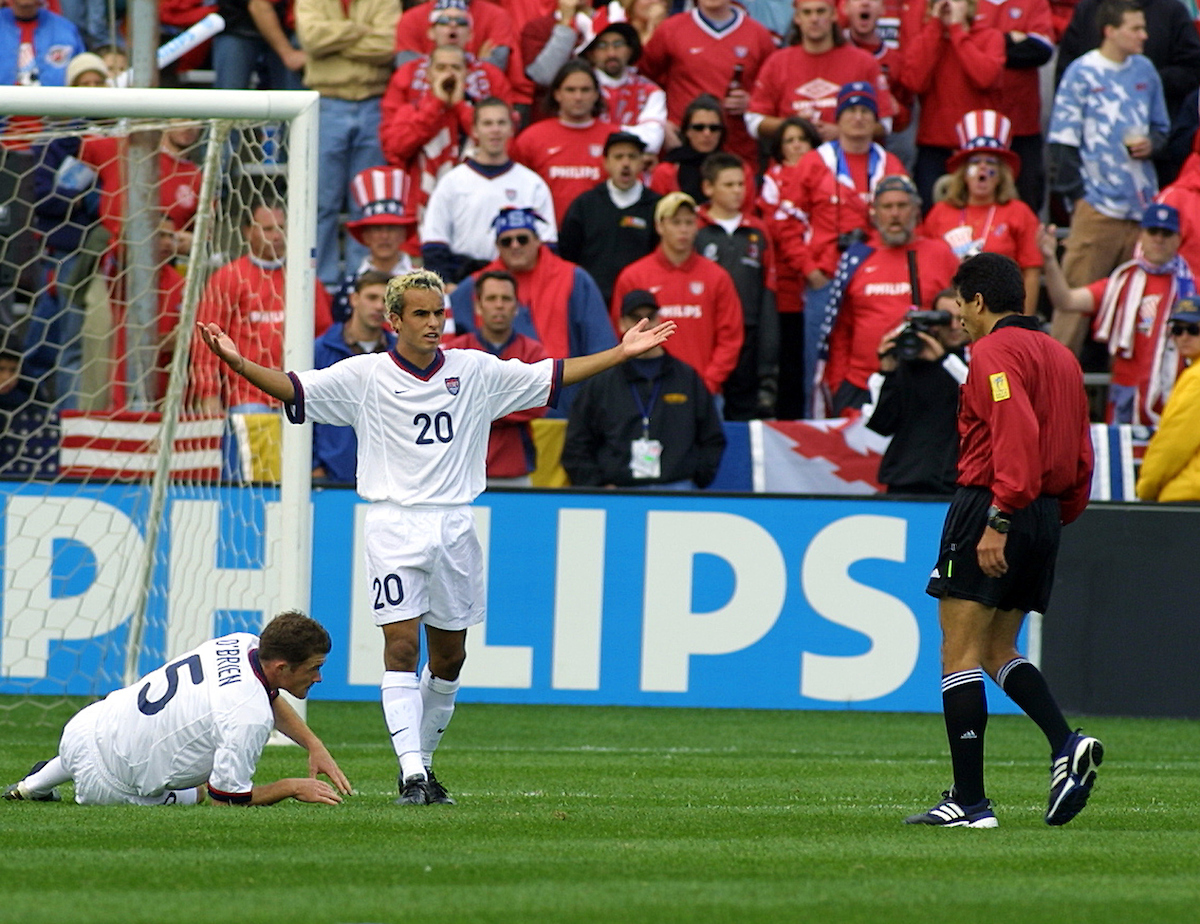 Everything fell the USMNT's way as it defeated the Caribbean side, 2-1, before 40,483 fans at old Foxboro Stadium in Foxborough, Mass. to qualify for the 2002 FIFA World Cup in Korea/Japan.

"In terms of qualifying that day, we knew our chances were basically slim to none," said Joe-Max Moore, who scored both goals. "The only thing we were focused on that day was getting the three points. A draw was like a loss in that scenario."

It was an emotional day for Americans for other reasons. Only 26 days after nearly 3,000 people died and another 25,000 injured in terrorist attacks on the World Trade Center, the Pentagon and a plane that crashed into Shanksville, Pa. on Sept. 11, the United States was still grieving.

"We really didn't need any more motivation that day," Moore said. "I do believe it fired the guys up even more. … There was a tremendous amount of patriotism within the team and stadium."

"It was a special day, a very emotional day to wear an American jersey," added U.S. captain Claudio Reyna, who wore a U.S. flag armband that day. "It was the first time a U.S. team represented the country post 9/11. There was anger on the team, too. We just carried all the feelings everybody had throughout the country."

With the game barely four minutes old, the U.S. scored. After Chris Armas was fouled by current Jamaica head coach Theodore Whitmore on the left side, Reyna sent a free kick toward the near post. A diving Moore headed the ball past goalkeeper Aaron Lawrence from six yards for a 1-0 lead.

In the 81st minute, Tyrone Marshall took down Landon Donovan on the right side of the box for a penalty kick. Moore volunteered to take it. 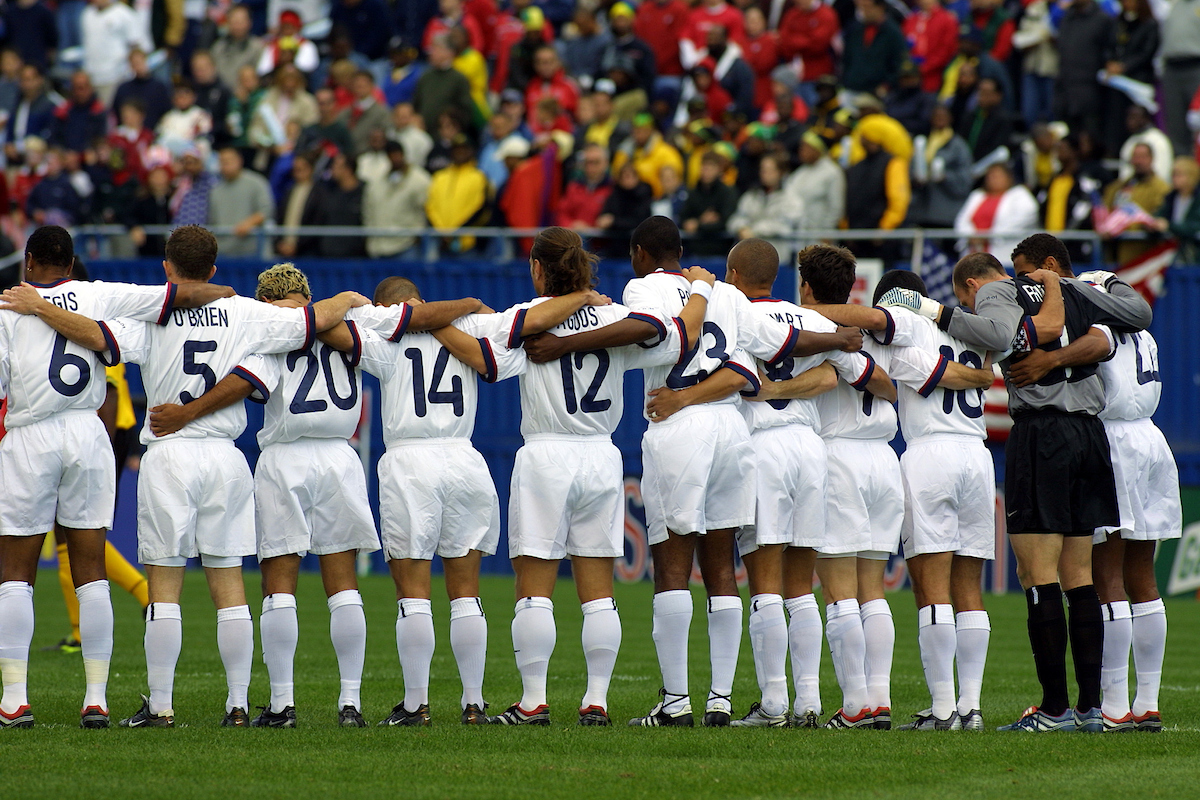 "I think Bruce had chosen Claudio or Earnie [Stewart] and I to take any penalties that day, so when Landon got taken down in the box, I just remember looking at those guys and saying 'I feel good,' " Moore said.

After the USA had missed its only two penalties during Bruce Arena's tenure, the head coach admitted that he could hardly look. "I was thinking of turning my back," he said. "If he's got the courage to take it, at least I can watch."

Moore took a few steps backward toward the penalty arc for a running start before drilling a low, right-footed shot into the right corner. 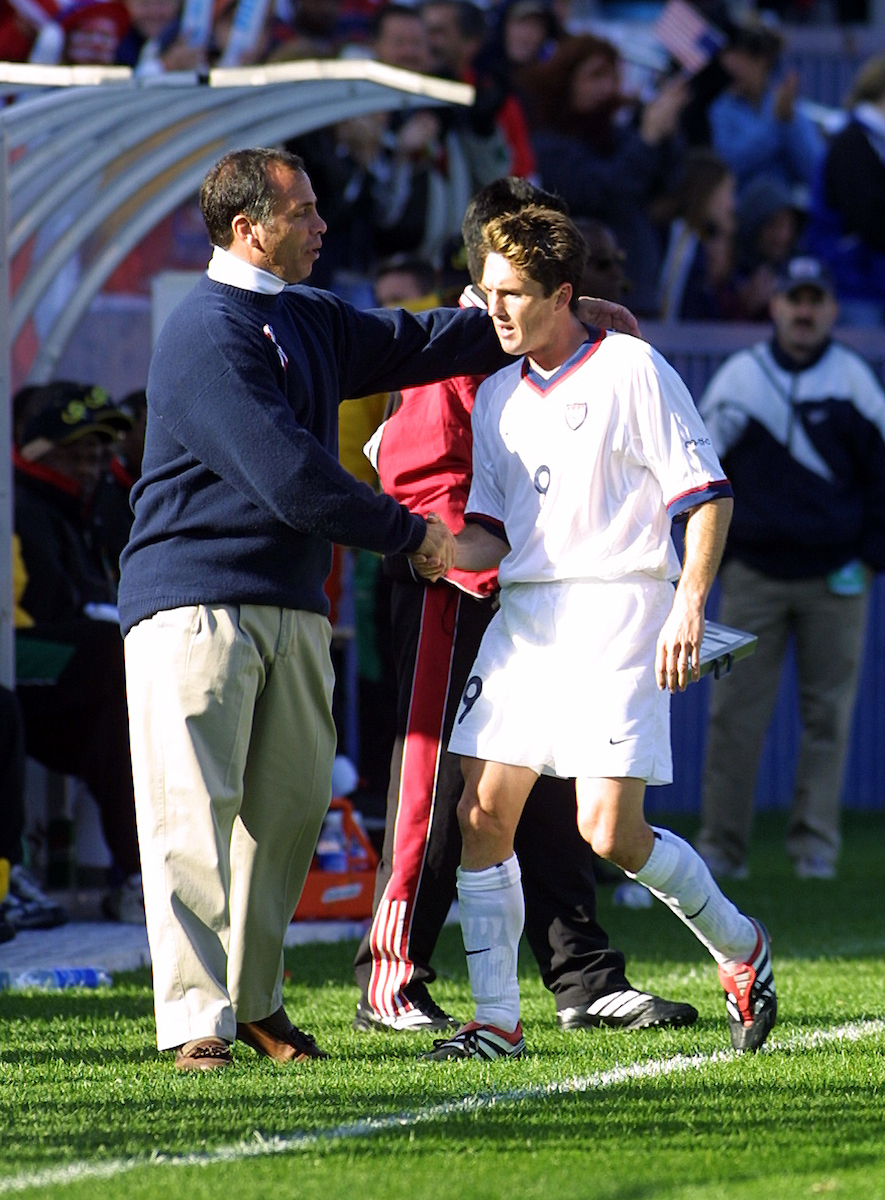 After five tense minutes of stoppage time, the U.S. had earned a 2-1 triumph. Several minutes later while milling around the field, the team discovered that Costa Rica and Mexico played to scoreless tie and Trinidad & Tobago won in Honduras.

"It was huge relief," Moore said.

Added Reyna: "It was party time. It was a fine night out in Boston for the boys."