How Inclusion, Belonging, and Love of the Game Created a Welcoming Environment for USA Fans of Any Background
Luis LeyvaNovember 9 2021
Featured

Soccer has no language: it is the language. In the melting pot that is our country, that’s the mindset that the members of Barra 76 are taking as they look to build an inclusive Supporters’ Group where fans of multinational backgrounds can find a home to root for the U.S. National Teams, specifically for those whose primary language is Spanish.

Founded in 2019, the group has already established several chapters across the country, and after being slowed down by the global pandemic in early 2020 they’re ready to pick up where they left off to grow the fanbase.

“A lot of Latinos don’t know where to go to support the team because they speak Spanish,” said Alexis Palencia, a Barra 76 member from California. “We want to create a space where people can come and be happy. We’re Latinos together, and through Barra 76 more Latinos can come support the team more than ever.” 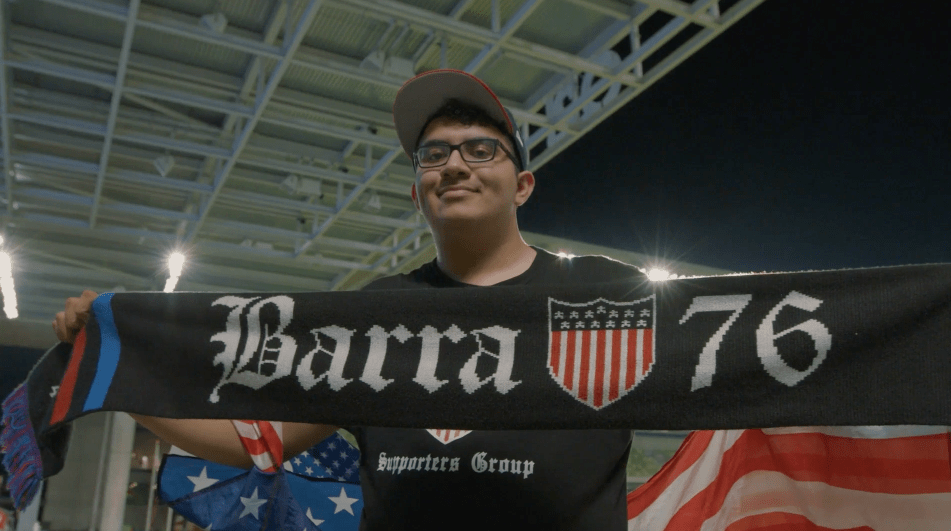 Palencia is a prime example of what Barra 76 is all about. He shares a Salvadoran, Mexican, and U.S. heritage, but identifies most with the last. He loves El Salvador and Mexico, and he still has family in both countries, but after attending his first few USA games he realized that was the team he most related to and the one he felt the most passion for. Through Barra 76, he hopes that others in situations like his can feel more comfortable supporting their team.

Jorge Chavez, a Barra 76 member from Texas, believes the group presents an opportunity to make the supporters’ culture more representative of the United States. Just like USMNT striker Ricardo Pepi, Chavez was born in El Paso, Texas to Mexican parents. His father is from Chihuahua and his mother from Zacatecas. He learned English and Spanish simultaneously, and Mexican culture was a big part of his upbringing near the border.

Despite being proud of his roots and loving his heritage, he always saw the U.S. team as the team of his nation, and he believes the group will serve as a welcoming ground for others who might feel the same way.

“That’s why we established Barra 76, because we want to establish a Supporters’ Group where people from any Latin background can feel welcome,” Chavez said. “Whether they’re from Nicaragua, or any part of Central America, Mexico, Puerto Rico, or South America.

“I grew up here, I live here, and my friends are here. Anyone who comes from a similar background is more than welcome to join us. Let’s grow the Barra so we can be a multinational community, because we’re in the United States and this is a multinational country.” 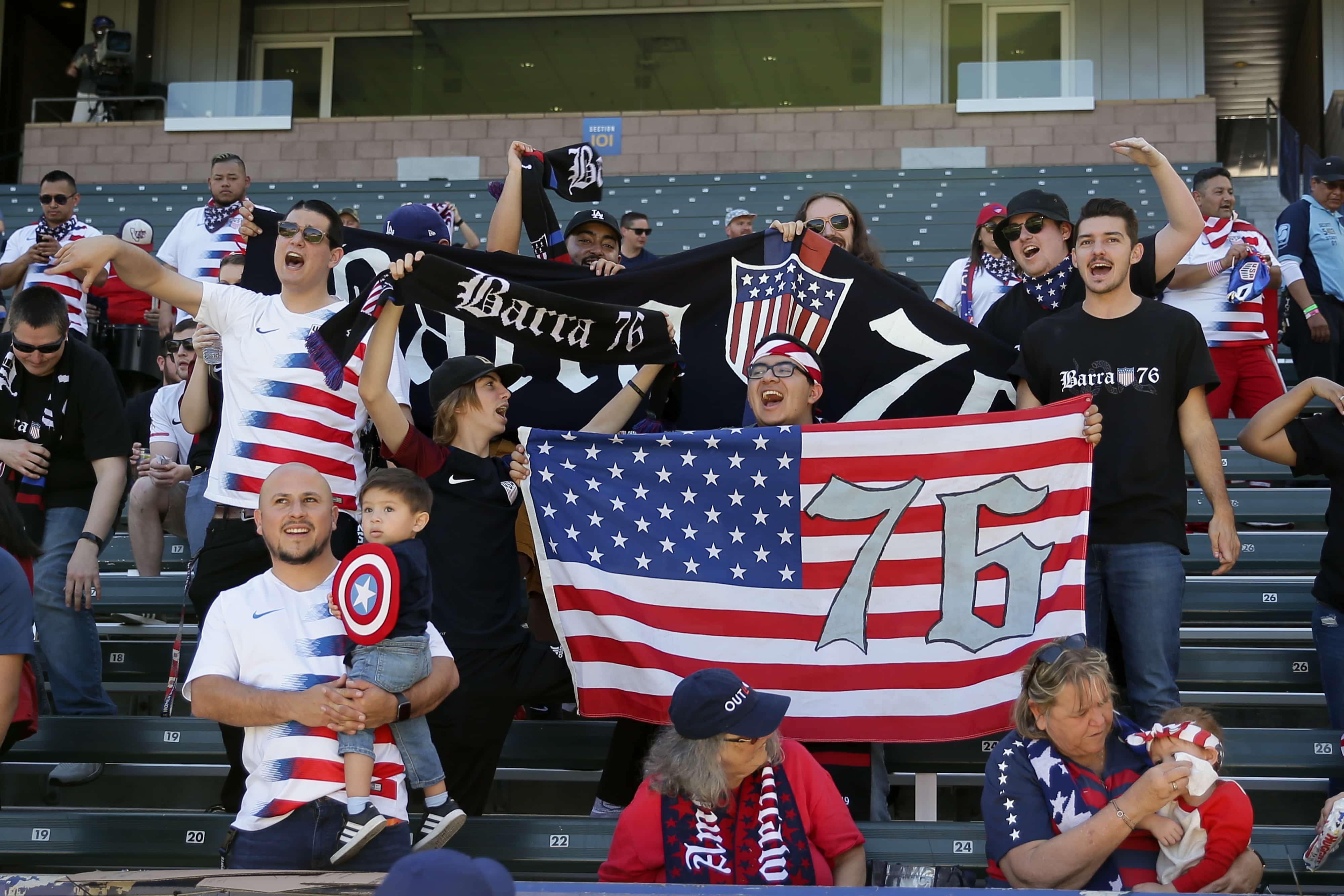 Cheering for the United States from a young age was something current Barra 76 Dallas President Miguel Villalpando Jr. has always made him feel proud, even if it often made him feel like the black sheep of his family. His message when he speaks to people who are interested in joining the group is simple: “You are not alone.”

Villalpando Jr. has noticed many people he comes across tend to share a similar history on how they became USA fans, especially when it comes to people whose parents are originally from elsewhere. His story is similar to Palencia and Chavez’s, and it’s an overlapping theme that flows throughout most members of the group. 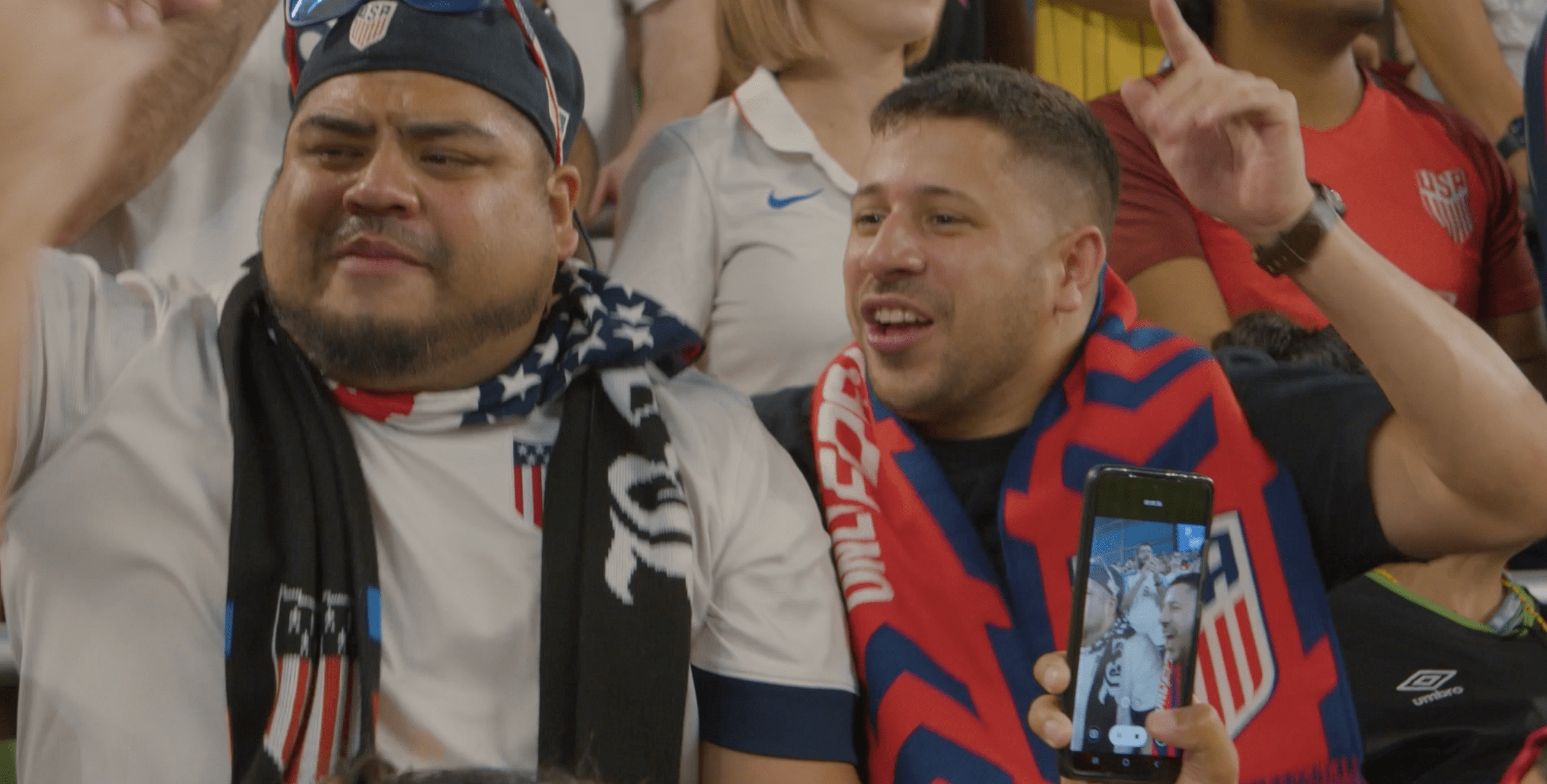 The idea isn’t to create something separate, but rather to provide an avenue for people to be included. While they’re their own independent group, Barra 76 chants next to the American Outlaws at matches. There’s a positive relationship between the groups and the aim is to build support in unison, which for Barra 76 Dallas member Lorenzo Castillo starts with welcoming people and immersing them into the supporter culture.

“Soccer is in our blood, and we want to be part of this big game,” Castillo said. “We represent Latinos, the USA, and we’re very proud. The main thing is that it’s happening in this country and I’m proud to be a part of that.” 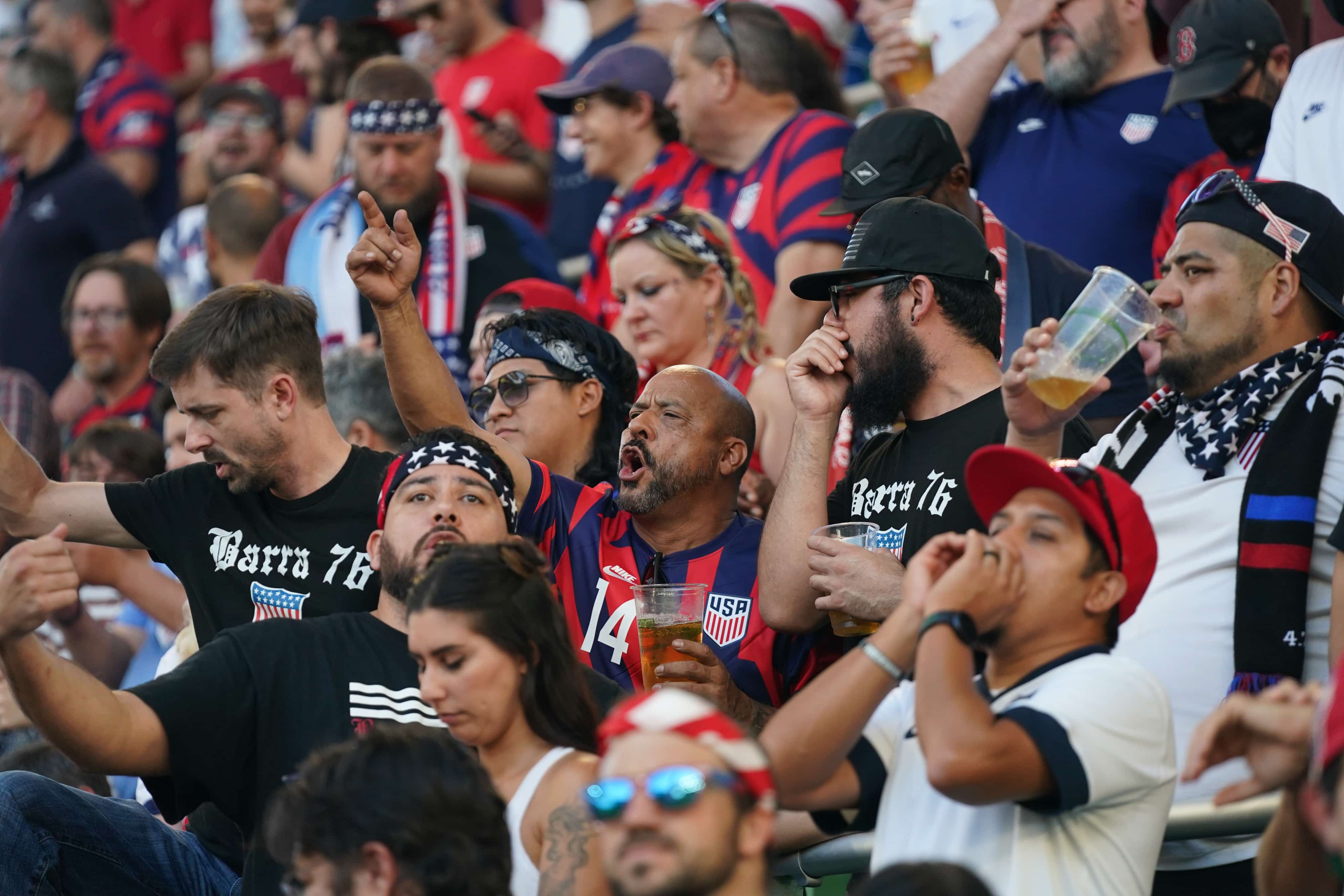 There’s no better time to do that than now. The USMNT will take on Mexico in a World Cup Qualifier on Friday, Nov. 12 after defeating El Tri in two thrilling major tournament finals during the summer. It’s as big of a game as they come, with Mexico and the United States sitting first and second place respectively in the Concacaf standings. As they have throughout the USMNT’s home qualifiers this cycle, Barra 76 will be in full voice at Cincinnati’s TQL Stadium as they look to leapfrog El Trí and move top of the table.

Palencia attended both finals in which the USMNT triumphed over their neighboring rivals. The first came in the inaugural Concacaf Nations League final in which the USMNT came from behind twice to win 3-2 in extra time. A match full of drama as Gio Reyna and Weston McKennie put home equalizers before Christian Pulisic’s game-winning penalty kick and Ethan Horvath’s timely penalty save in the dying moments secured the win. 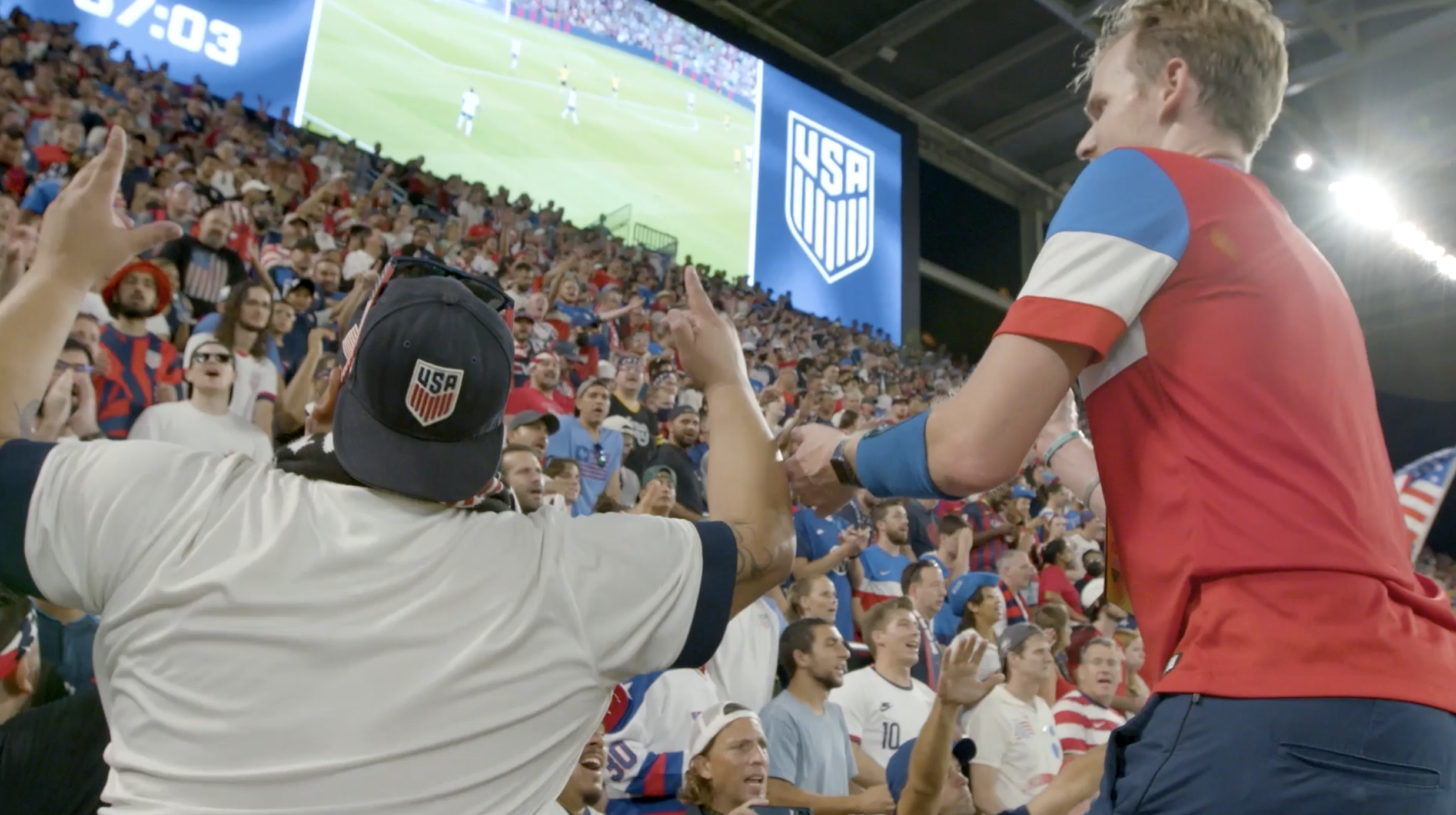 It was an amazing time for USMNT fans and for Palencia, who remembers texting his mom and other family members amid the euphoria with a bit of banter while celebrating the USA victories. He thinks about that often, and how his multicultural heritage plays into the dynamic of a rivalry like this one from a fan’s perspective. He hopes that as more kids grow up watching it, they’ll also feel proud of supporting the United States.

“I really want to beat them (again),” Palencia said. “I think one day a lot of Mexican-Americans will think ‘yeah, my mom and dad love Mexico, but I really like the USA.’ I hope a lot of kids feel that way, and I know one day that will be our future.”

As they work toward that future, Barra 76 will be at the forefront of welcoming Spanish speakers and fans of multicultural backgrounds into their family, rallying and chanting together as they help push our teams the only way they know:

To learn more about Barra 76 or to sign up to be a member, visit www.barra76.com.