CHICAGO (Dec. 18, 2021) – USMNT forward Christian Pulisic has been voted 2021 BioSteel U.S. Soccer Male Player of the Year after a banner year in which the 23-year-old won major hardware for club and country while scoring a number of momentous goals for the U.S. Men’s National Team. 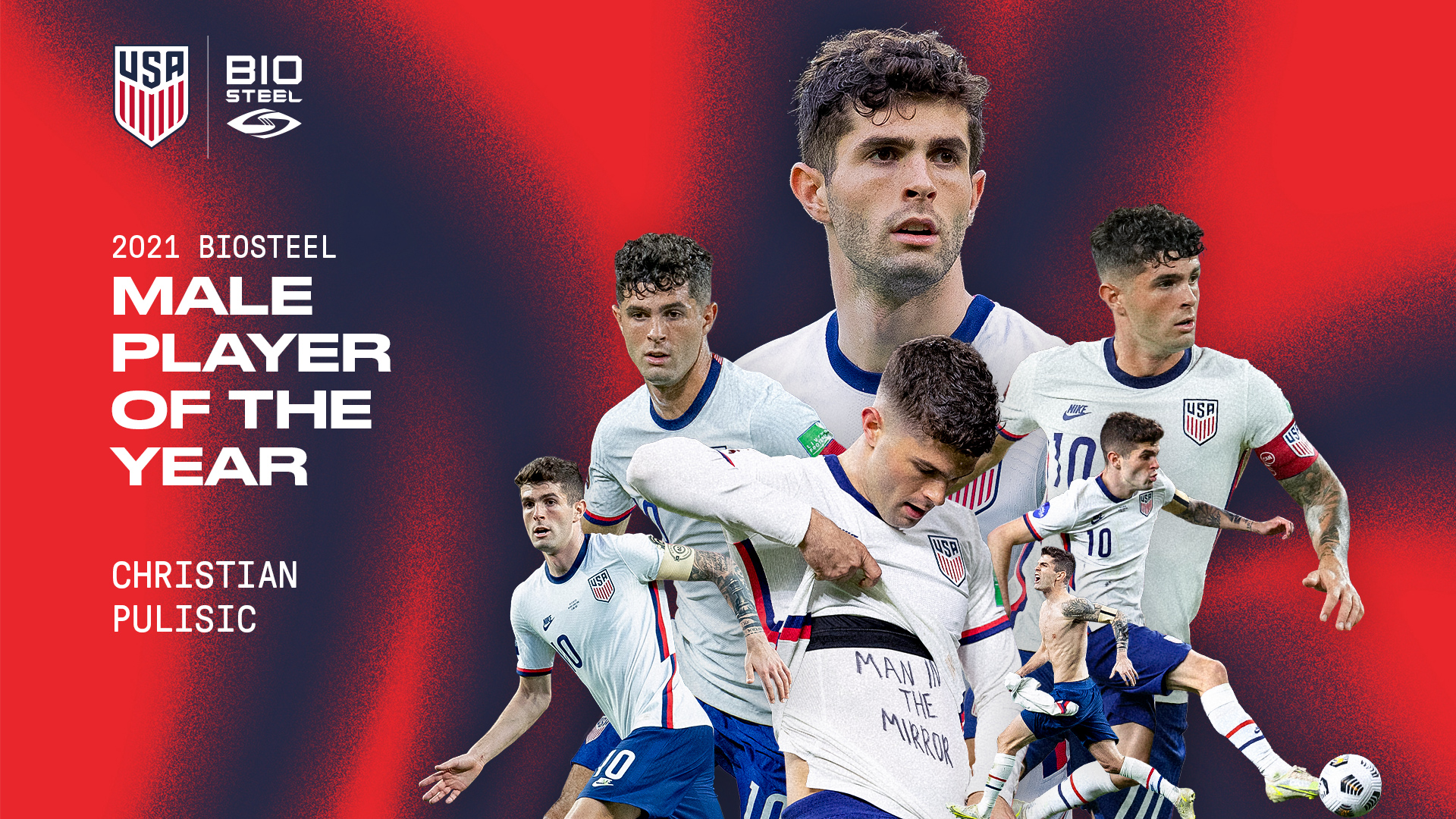 USMNT forward Ricardo Pepi was voted Chipotle U.S. Soccer Young Male Player of the Year after a massive breakout year for the USMNT during the start of its World Cup qualifying campaign this fall and at the club level with FC Dallas. The 2021 MLS Young Player of the Year sparked a historic 4-1 comeback victory for the U.S. in his debut at Honduras, netting three goals while adding three assists in six World Cup qualifying appearances this year. 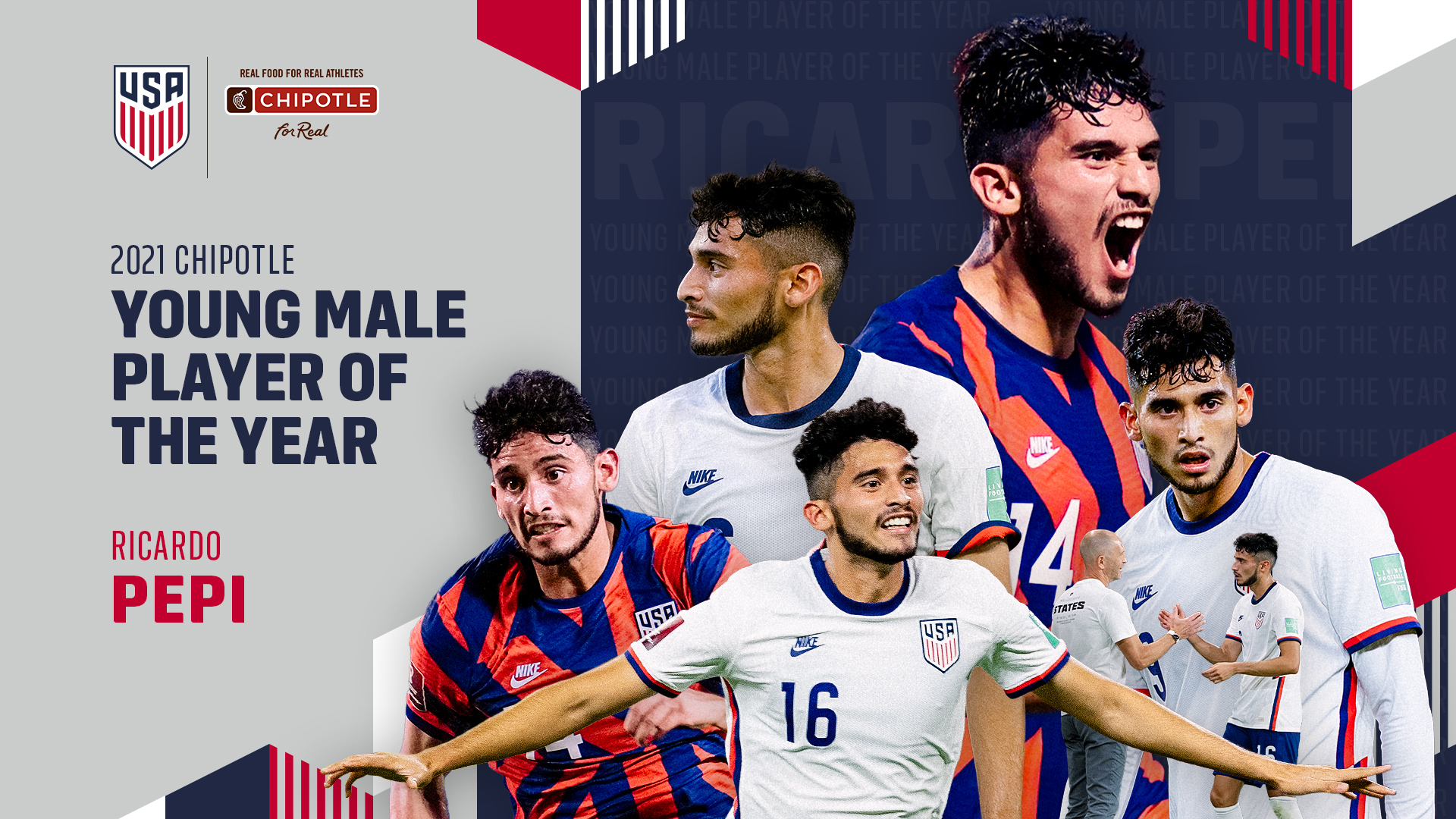 Pepi earned 60 percent of the overall vote for Young Male Player of the Year. Midfielder Yunus Musah was second (23 percent) and Gianluca Busio was third (11 percent).

Votes for U.S. Soccer Male and Young Male Player of the Year Awards are collected from respective National Team coaches, National Team players who have earned a cap in 2021, members of the U.S. Soccer Board of Directors, U.S. Soccer Athletes’ Council, professional league (MLS and USL) head coaches, select media members and former players and administrators.

After bursting onto the USMNT at age 17, Pulisic has consistently performed at a high level for the USA and this year wrapped up his second season with English Premier League powerhouse Chelsea.

In 2021, all three of Pulisic’s goals for the U.S. were game winners, including two iconic strikes against archrival Mexico. During June’s inaugural Concacaf Nations League Final, he put home a 114th-minute penalty kick to give the USA a 3-2 lead in Denver. During November World Cup qualifying, Pulisic came off the bench and scored on his first touch when he nodded home Tim Weah’s cross to open the scoring in the USMNT’s 2-0 “Dos a Cero” World Cup Qualifying win over El Trí in Cincinnati. He captained the USA a career-high four times in 2021, including the Nations League Final and two September World Cup qualifying matches.

Pulisic also continued to set a new standard for American players at the club level, becoming the first USMNT player to feature in and win the UEFA Champions League when Chelsea defeated Manchester City 1-0 on May 29 in Porto. Pulisic played a major role in getting his club to the pinnacle match of club soccer, scoring the opening goal in the first leg of the semifinals, a 1-1 draw at Real Madrid. He also put up the second multi-goal game of his Premier League career, bagging a brace in Chelsea’s 4-1 win against Crystal Palace on April 10. Overall, Pulisic made 40 appearances across all competitions for Chelsea, recording six goals and four assists, while also helping the club to a runner-up finish in the 2020-21 FA Cup and a top-four finish in the Premier League.

At just 18 years old, Pepi turned in one of the most memorable USMNT debuts in recent memory during September World Cup qualifying, catalyzing a comeback win in the hostile environs of San Pedro Sula against Honduras in the final match of the window. In the second half, “El Tren” teed up the game-tying goal, scored the game-winner, added another assist and took a hard shot to set up a fourth and final tally for the 4-1 win and a crucial three points.

Pepi continued his hot streak in the October international window, bagging a brace in the USA’s 2-0 win against Jamaica in Austin. The El Paso, Texas, native has played in every qualifier since his U.S. debut.

The forward also took the next step at the club level, finishing the MLS season as the league’s leading American scorer with 13 goals. He also became the youngest player in MLS history to net a hat trick, accomplishing the feat on July 24 against LA Galaxy.

Pepi was selected to this summer’s MLS All-Star Game, scoring the game-winning penalty in a shootout against the Liga MX All-Stars. After mostly serving as a super-sub in 2020, he made a career-high 24 starts in 31 appearances for FCD this season, solidifying himself as the club’s first-choice scoring threat.

A total of 23 of the 24 U.S. Soccer Young Male Player of the Year winners have earned caps with the full USMNT, and 10 have gone on to represent the USA at a FIFA World Cup.