CHICAGO (Dec. 16, 2021) – In a year in which she showed consistent world-class form while playing one of soccer’s most challenging positions for club and country, midfielder Lindsey Horan has been voted the 2021 BioSteel U.S. Soccer Female Player of the Year.

“First and foremost, I want to congratulate the other nominees,” said Horan. “They all had incredible years, especially Carli [Lloyd] in her last year with the team. She was outstanding. I really appreciate everyone who voted and who supported me in the past year, which was a difficult year for everyone. I’m not really a player who wins these types of awards, so I’m super appreciative and it’s very meaningful to me.” 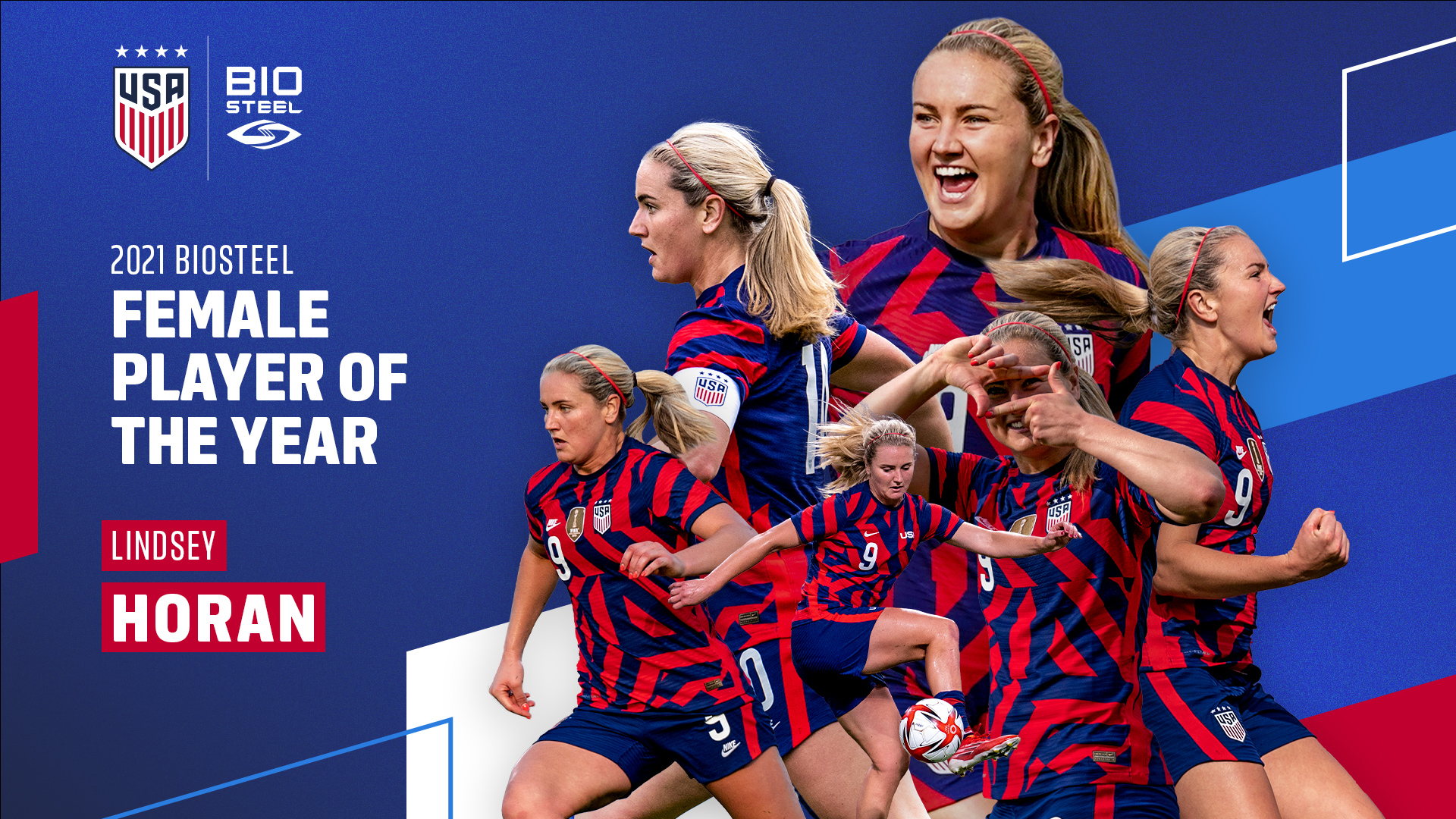 "To see my name alongside the list of amazing players who have won this award in the past is unbelievable," said Rodman. "It’s an honor to receive this award from U.S. Soccer and our amazing fanbase. This year was a journey for me both mentally and physically as I settled into my new life as a professional. I want to thank my family, teammates, coaching and medical staffs for everything they have done for me on and off the field. It truly takes a village. I am so incredibly proud of what my Spirit teammates and I accomplished this season, and I would be humbled to get an opportunity to play for the U.S. again and represent our country in 2022." 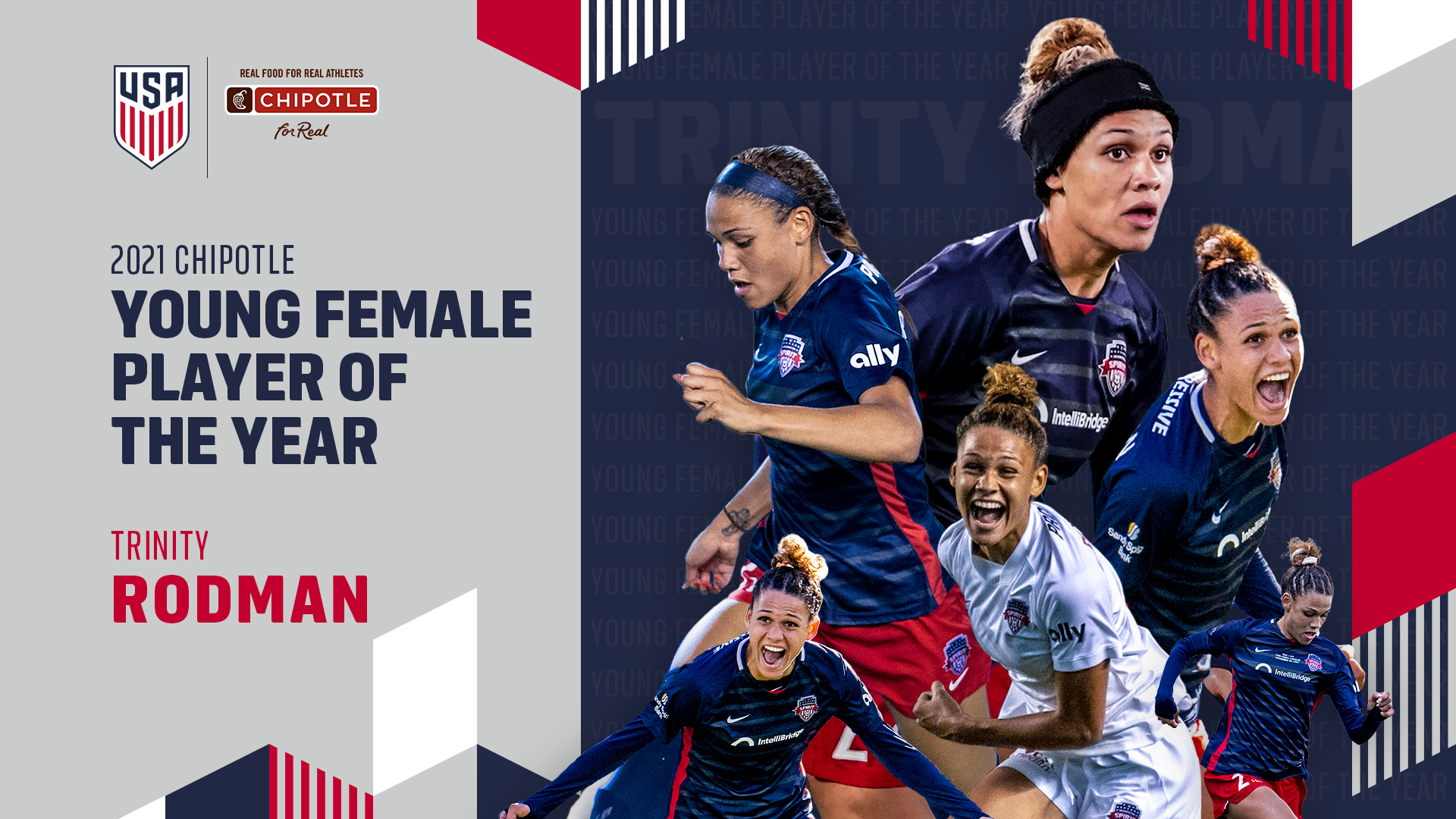 The 27-year-old Horan is widely known as the first American player to forgo a college scholarship to turn professional, which she did immediately after high school in signing with French powerhouse Paris Saint-Germain.

This year was Horan’s 10th as a professional player, and it was one of her best. She led the USA in minutes played with 1,707, starting 18 of her 22 international games. She finished tied for fourth in goals (6) and tied for second in assists (5), all while playing both defensive and attacking midfielder.

“I’ve worked very hard to get to this point in my career, and while I know there’s so much more work to do and things to accomplish individually and as a team, it’s always very nice to be recognized,” said Horan. “I wish we had won more team awards this year, but that’s professional football, and I know everyone is focused on having a great 2022 and beyond. Finally, I want to thank my trainer, Billy Lagreca, my family, friends and loved ones who have supported me not only through this year, but through my entire life in the game. We’re all a product of the people around us, so the biggest thanks goes to my family, my coaches and teammates.”

With Ertz injured, Horan played defensive midfielder leading into the Olympics and for the first half of the first Olympic match, distinguishing herself at that position before moving to a more advanced role as the tournament wore on. At the Olympics, she played in all six games, starting five, and was third in minutes played with 499. Horan scored one goal in the OIympics, that coming in her 100th cap during the group stage victory against New Zealand.

Her two assists against Brazil at the 2021 SheBelieves Cup brought her career assist total for the USWNT to 31, making her the 18th player in USWNT history to record 30 or more assists. She tallied her 32nd assist with a dynamic play that led to feeding Carli Lloyd for her first goal in the Olympic bronze medal game. She also scored against Colombia, Jamaica, Mexico, Korea Republic and Australia on the year.

Her goal against Mexico was one of the best of Horan’s career thus far and one of the best by a U.S. player of late when she smashed home a full volley to open the USA’s 4-0 win on July 5.

Against Australia on Nov. 27, Horan captained the USA for the second time – the first was during her 100th cap celebration match on Oct. 21 – and nailed a critical penalty kick in the 68th minute to clinch the match. It was her 25th career goal, making her the 24th player in USWNT history with 25 or more goals.

For the Portland Thorns this season, she played in 14 games and had two goals and three assists while once again showing herself as one of the league’s top two-way midfielders and overall players. She helped the Thorns to titles in the NWSL Challenge Cup and the Women’s International Champions Cup while also playing a big part in Portland’s run to clinching the NWSL Shield. She was named to the 2021 NWSL Best XI Second Team.

"Lindsey was very, very good this year and she deserves this recognition,” said U.S. Women’s National Team head coach Vlatko Andonovski. “Her work ethic in the midfield and her mentality to continue to evolve as a player is inspiring. Her ability to control the tempo of a game at the highest levels is world class, as is her ability to win balls in the midfield and help create goals in the attack. She’s an important piece of our National Team and we’re looking forward to seeing continue to grow as one of our leaders.”

Rodman earned 48 percent of the overall vote for the Young Female Player of the Year. Midfielder Catarina Macario was second (32%) and defender Emily Fox was third (13%).

Rodman, who turned 19 in May, was the youngest player to be drafted in the NWSL history, going to the Washington Spirit with the second overall pick in the 2021 NWSL Draft.

Her performances were key in helping the Spirit finish third in the league before going on to win the NWSL championship in one of the best title runs in sports this year. Rodman was one of the sensations of the 2021 NWSL season, scoring six goals (including two game-winners) with six assists, which tied for the league lead. She was second in the NWSL in shots and shots on goal. She played in 25 games with 22 starts spanning more than 2,000 minutes and was named the 2021 NWSL Rookie of the Year.

Rodman scored in her NWSL Challenge Cup debut, becoming the youngest American to score in an NWSL competition. During the regular season she scored against Chicago (twice), Kansas City, New Jersey/New York, North Carolina and Houston. Rodman was a major part of the USA’s U-20 cycle in 2020 and played in the 2018 FIFA U-17 Women’s World Cup.

Twenty of the 24 U.S. Soccer Young Female Player of the Year winners have earned caps with the full USWNT and 15 of them have gone on to play in a FIFA Women’s World Cup.