After a wait of nearly four years, the USMNT has embarked on the arduous journey of becoming one of the 32 teams earning the right to compete in the 2022 FIFA World Cup.

Here are Five Things to Know about the process the USA and the rest of Concacaf final round participants will undertake in order to advance to Qatar ’22:

Concacaf is one of six regional confederations which sends participants to the World Cup. FIFA determines how many spots each confederation gets in the 32-team tournament, and from there each organizes its own qualifying competition. The only team which gains automatic entry is the host, in this case Qatar.

Since the 2006 edition of the tournament, Concacaf receives 3.5 spots – the top three finishers receive automatic berths, while the fourth-place team competes in an Intercontinental Playoff against an opponent from either the AFC (Asia), CONMEBOL (South America) or Oceania (South Pacific) which will take place in June of 2022.

Concacaf has 35 FIFA-affiliated member associations eligible to participate in the World Cup. Under a format revamped in part due to the global pandemic, there are a total of three rounds of competition. At the start, the top five highest ranked Concacaf teams received an automatic place in the Final Round – Mexico, USA, Costa Rica, Honduras and Jamaica.

In Round 1, teams ranked 6-35 were drawn into six groups of five and played a single round-robin matches (two home and two away), with group winners qualifying for the second round.

In Round 2, the six first round group winners played in a two-legged home-and-away series. The three winners – Canada, El Salvador and Panama emerged to join the other five teams in the final round.

With a total of eight teams – otherwise known as The Octagonal - the Final Round consists of 14 matches (seven home and seven away). Previously, only six teams made the Final Round, which means there are two additional participants competing for the same number of spots.

Again due to the global pandemic, a process that was meant to begin in September 2020 was forced to kick off one year later in September 2021. As a result, teams are now in the midst of a grueling schedule that features 14 matches in a seven-month span (September 2021 to March 2022). 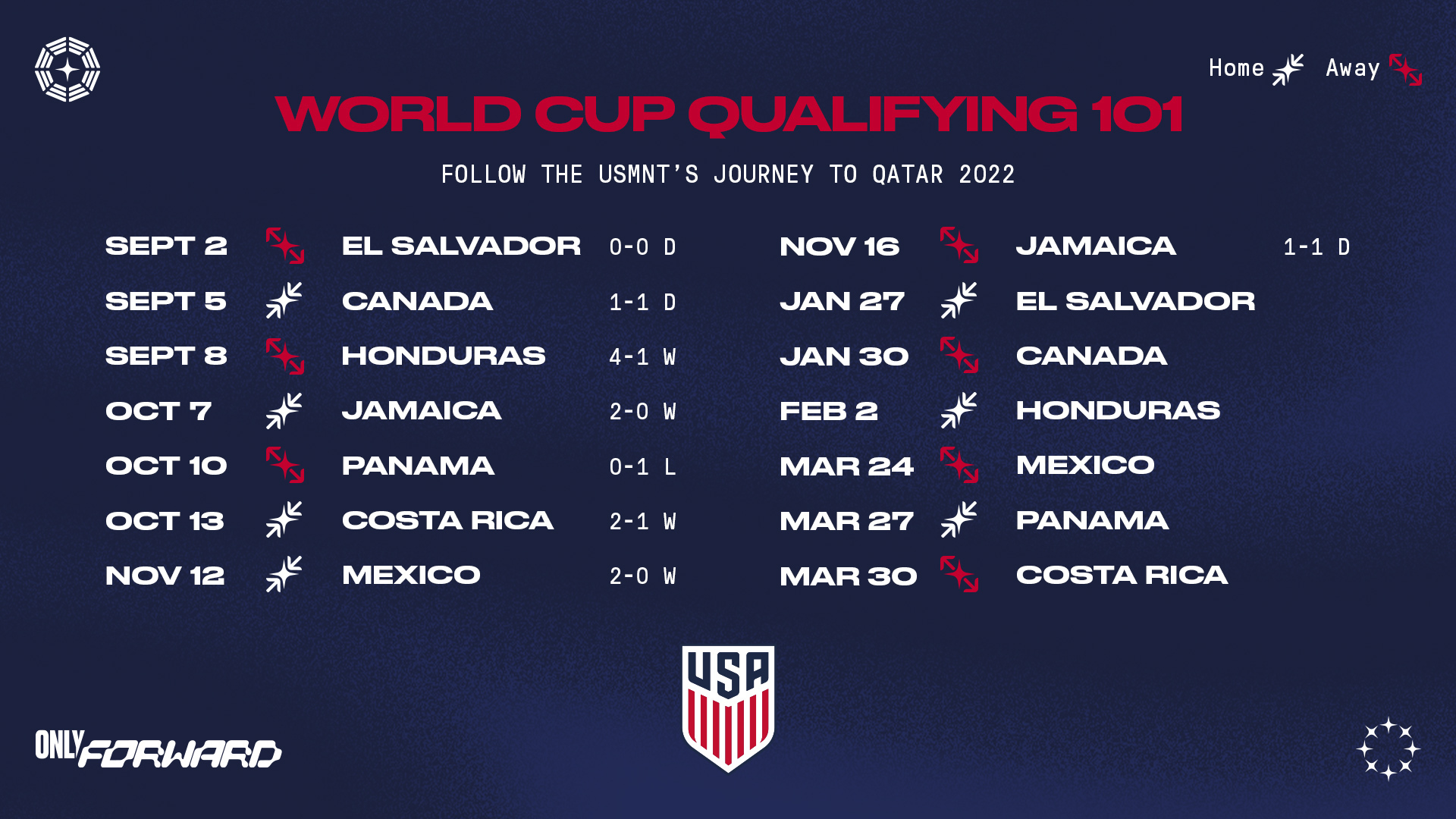 In a normal qualifying campaign, two matches would be played in a 10-day window, typically in a Friday-Tuesday cadence. This time around, due to the condensed format there will four ‘triple dates’ in which three matches will be played in a seven-day span, following a Thursday-Sunday-Wednesday cadence. The only exception is the November window, during which only two matches will be played.

With wins worth three points and draws worth one, the general rule of thumb for successful qualification out of Concacaf is to win at home and draw on the road. If a team were to win all seven of its home matches, it would be right on the doorstep of World Cup qualification and depending on other results, could even end up in the World Cup without picking up any points on the road.

That said, away results are important and where the difference can be made up. While a draw on the road yields one point for both teams, it also means the road team has taken two valuable points away from the hosts. While not as common, road wins are incredibly valuable in the qualification process as the away team picks up all three points and serves a serious blow to the home side after denying them all three points.

The USMNT opened the final round of 2022 FIFA World Cup Qualifying in September, with a challenging three-match set away to El Salvador (Sept. 2), home against Canada (Sept. 5) and back on the road at Honduras (Sept. 8).

Opening the qualification process at El Salvador in September, a young U.S. side played to a spirited 0-0 draw in front of a near-capacity crowd at Estadio Cuscatlan in San Salvador. A record-tying 12 U.S. players made their World Cup Qualifying debut in the match and contributed to denying the hosts two valuable points in its first final round qualifier since 1989.

Returning home to face Canada on Sept. 5, the USMNT encountered a Les Rouges side content to sit back and contain with hopes of taking a point on the road. Twenty-year-old USMNT attacker Brenden Aaronson broke the deadlock 10 minutes after halftime, but Canada bounced back just seven minutes later as Alphonso Davies broke in on the left and found Cyle Larin for the equalizer in the 62nd minute, forcing the 1-1 draw on Sept. 5.

BEHIND THE CREST: USMNT Earns Road Point at El Salvador


With two points from two matches, the USMNT went back on the road to Honduras three days later. Gregg Berhalter elected to start what at the time was the youngest USMNT World Cup Qualifying lineup of all-time, including 18-year-old Ricardo Pepi. After Brayan Moya’s 27th minute header put Honduras ahead at the break, the 18-year-old striker spearheaded a second-half comeback, assisting on Antonee Robinson’s 48th minute equalizer, before nodding the USA ahead with his first international goal in the 75th minute.

As Honduras pushed to tie the match, Pepi linked up with Brenden Aaronson who put the game on ice in the 87th minute before Sebastian Lletget put home a rebound on Pepi’s shot in second-half stoppage time to close out a resounding 4-1 comeback win on Sept. 8

BEHIND THE CREST: USMNT Secures Comeback Road Win in Honduras


The USMNT reconvened for its first World Cup Qualifier in Austin to begin the October window and Pepi remained the hot hand, scoring both goals in a comprehensive 2-0 victory against Jamaica. The win combined with other results around the region pushed the USA into first place in the table after four matches.

Berhalter elected to make seven changes to his squad in the team’s visit to Panama three days later. In a game with few chances, a cagey USMNT side frustrated the hosts through the first half, but surrendered a header to Anibal Godoy in the 54th minute and couldn’t find an equalizer, falling 1-0 on Oct. 10 in Panama City.

BEHIND THE CREST: USMNT Secures Comeback Win vs. Costa Rica


Returning to open up a new home at Lower.com Field in Columbus against Costa Rica, the USA fell behind early when Keysher Fuller gave the visitors a 1-0 lead in the first minute. The team went on the front foot and pulled things level through Sergiño Dest’s left-footed rocket in the 25th minute, before Tim Weah forced an own goal in the 66th to ensure a 2-1 U.S. victory.

The three points earned in Columbus pushed the USA into second place at the end of the October window.

Every four years, fans from both sides of the border mark their calendars on the date for the marquee matchup in Concacaf World Cup Qualifying: USA-Mexico. Leading off the only two-match window of the Octagonal, this game had extra spice – if it could handle any more – with the USMNT having defeated El Tri in back-to-back championship games during the summer, capturing the inaugural Concacaf Nations League title as well at the 2021 Gold Cup crown. But it’s in qualifying where results matters most, and U.S. Soccer selected newly minted TQL Stadium in Cincinnati to provide the environment for the USA to take a critical three points.

BEHIND THE CREST: USMNT Revives 'Dos a Cero' Against Mexico

Mexico goalkeeper Guillermo Ochoa decided to add his own fuel to the fire in the lead up, suggesting that his team was the “mirror” in which the USMNT wanted to see itself. Christian Pulisic had a message of his own to deliver, when in the 74thminute he headed home an expertly delivered cross from Tim Weah to give the U.S. a 1-0 lead. During the ensuing celebration Pulisic lifted his t-shirt to reveal his response: “Man in the Mirror.” When Weston McKennie beat Ochoa again in the 85thminute to double the lead, a familiar and heart-warming chant rang out through the stadium: “Dos a Cero! Dos a Cero!”The final whistle blew, and as Michael Jackson’s “Man in the Mirror” played, the U.S. players celebrated another historic victory against El Trí. 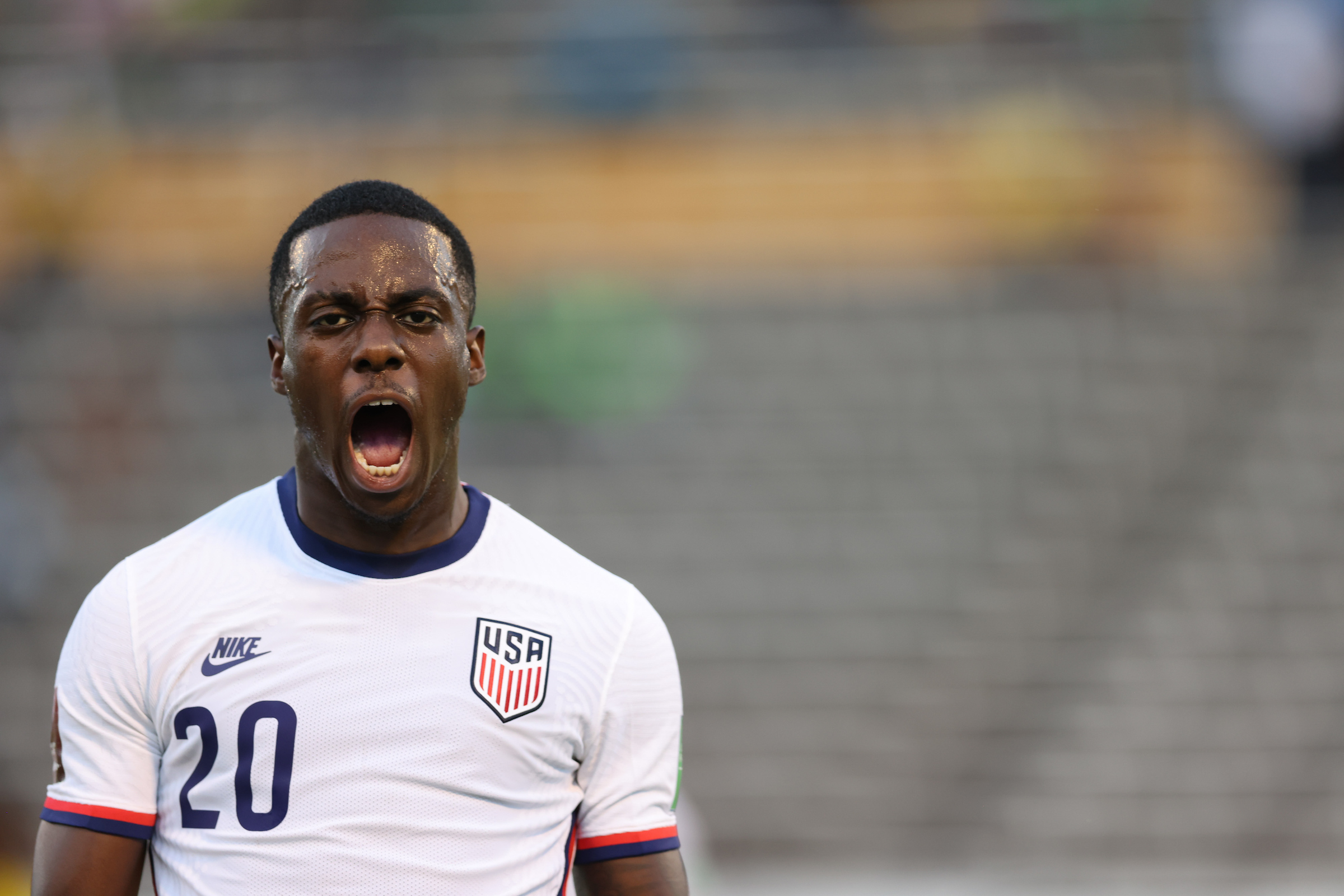 The job is never done until it’s done, and a dangerous Jamaican team awaited in Kingston four days later. With an average age of 22 years, 341 days, the USMNT lineup was the second youngest to start in a World Cup Qualifying match. While the U.S. got off to a promising start with the goal by Jamaican-American international Tim Weah in the 11thminute, Michail Antonio scored on a world-class banger from distance to level halfway through the first half. Neither side were able to break the deadlock, and the United States left Independence Park with an important point on the road.

Following the results from the other matches, the USMNT ended 2021 in second place in the Octagonal standings with six games remaining.