When the U.S. Men's National Team hosts El Salvador in Columbus in a FIFA World Cup Qualifier on Jan. 27 (7 p.m. ET; ESPN2, UniMás, TUDN), the visitors must overcome more than the wintry weather expected for the Concacaf Octagonal match.

Los Cuscatlecos will be challenged by the USMNT’s tradition of success in the central Ohio city.

A place the USMNT loves to call home, no U.S. city comes close to the record 11 qualifying matches hosted there, and the team’s record speaks for itself.

Since playing its first WCQ match in Columbus back in 2000, the USMNT hold a 8-1-2 record including the four memorable “Dos a Cero” victories against Mexico that have largely defined the team’s dominance against El Trí on home soil since the turn of the century. 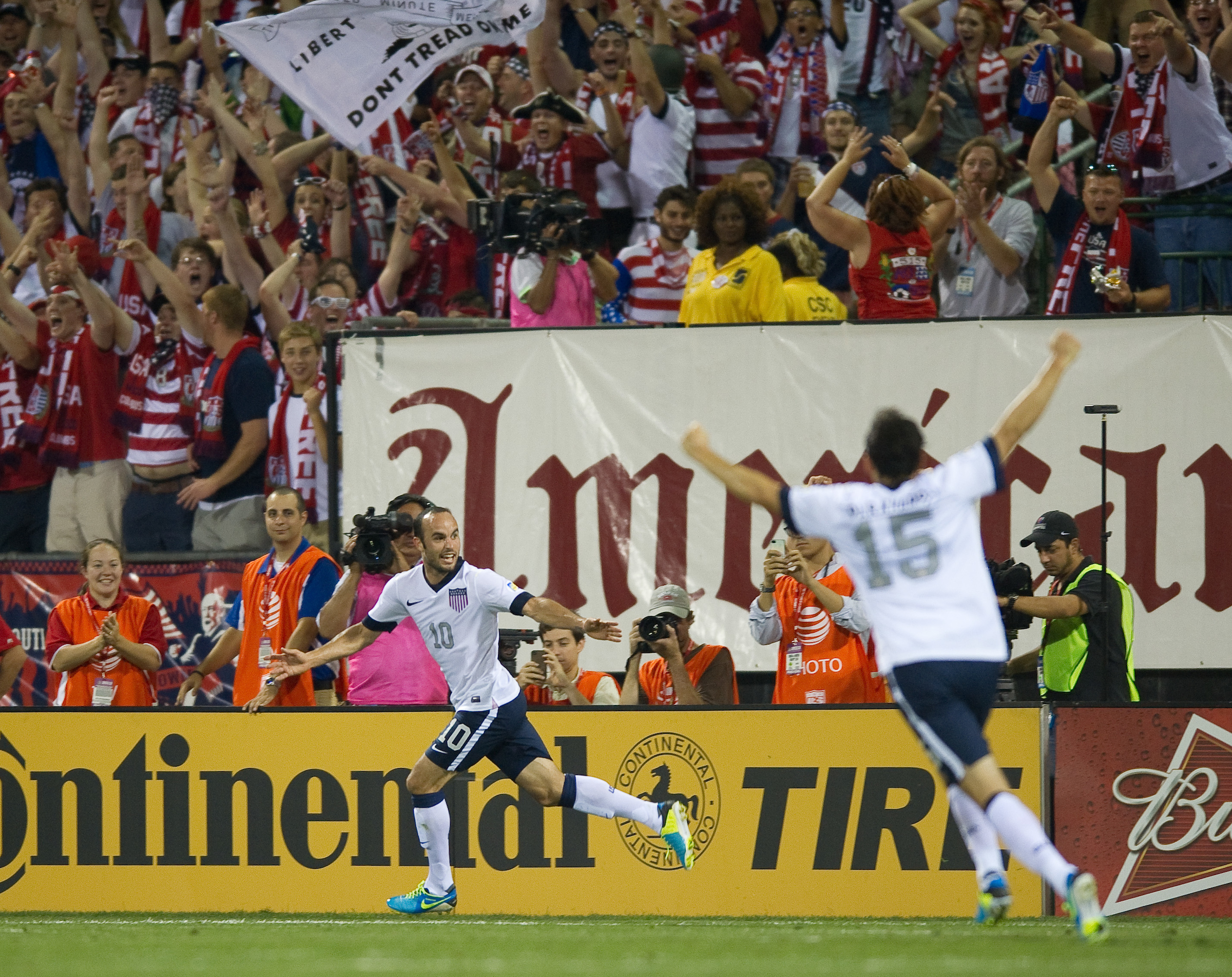 In those 10 games, the USA has outscored its foes, 16-4, while registering seven shutouts.

A fortress indeed, according to USMNT legend Landon Donovan.

"I think people may need to make sure they don't conflate the stadium with what was really the successful piece of it, which is the people in Columbus and people who traveled into Columbus," Donovan, who enjoyed his share of victories in Columbus, told ussoccer.com recently.

"For the longest time, we didn't have a place in our country where we knew we were going to have a home field advantage. Forget about location. The home field advantage is dictated by the people in the stands. The people of Columbus and of Ohio and whoever would travel in made those games what they were and gave us a true homefield advantage, certainly for the first time in my playing history. I think most players even before me would agree."

A former assistant of Gregg Berhalter with both the Columbus Crew and U.S. Men’s National Team, current Austin FC head coach Josh Wolff -- whose heroics as a substitute made the first 2-0 win against Mexico possible back in 2001 -- also has fed on and soaked in the high-energy atmosphere.

A TRADITION IS BORN


After playing Costa Rica to a scoreless draw in the first qualifier on Oct. 11, 2000, the USMNT found their footing on Feb. 28, 2001, in a 2-0 triumph over El Trí in a match played in frigid, 29-degree temperatures that are likely to be replicated in Thursday’s match against El Salvador.

Wolff, who had just four caps and one goal under his belt entering the match, replaced an injured Brian McBride in the 15th minute. After latching onto a Clint Mathis long ball, Wolff scored one of the most important goals in USMNT history two minutes into the second half when he rounded Jorge Campos before slotting home into the empty net. 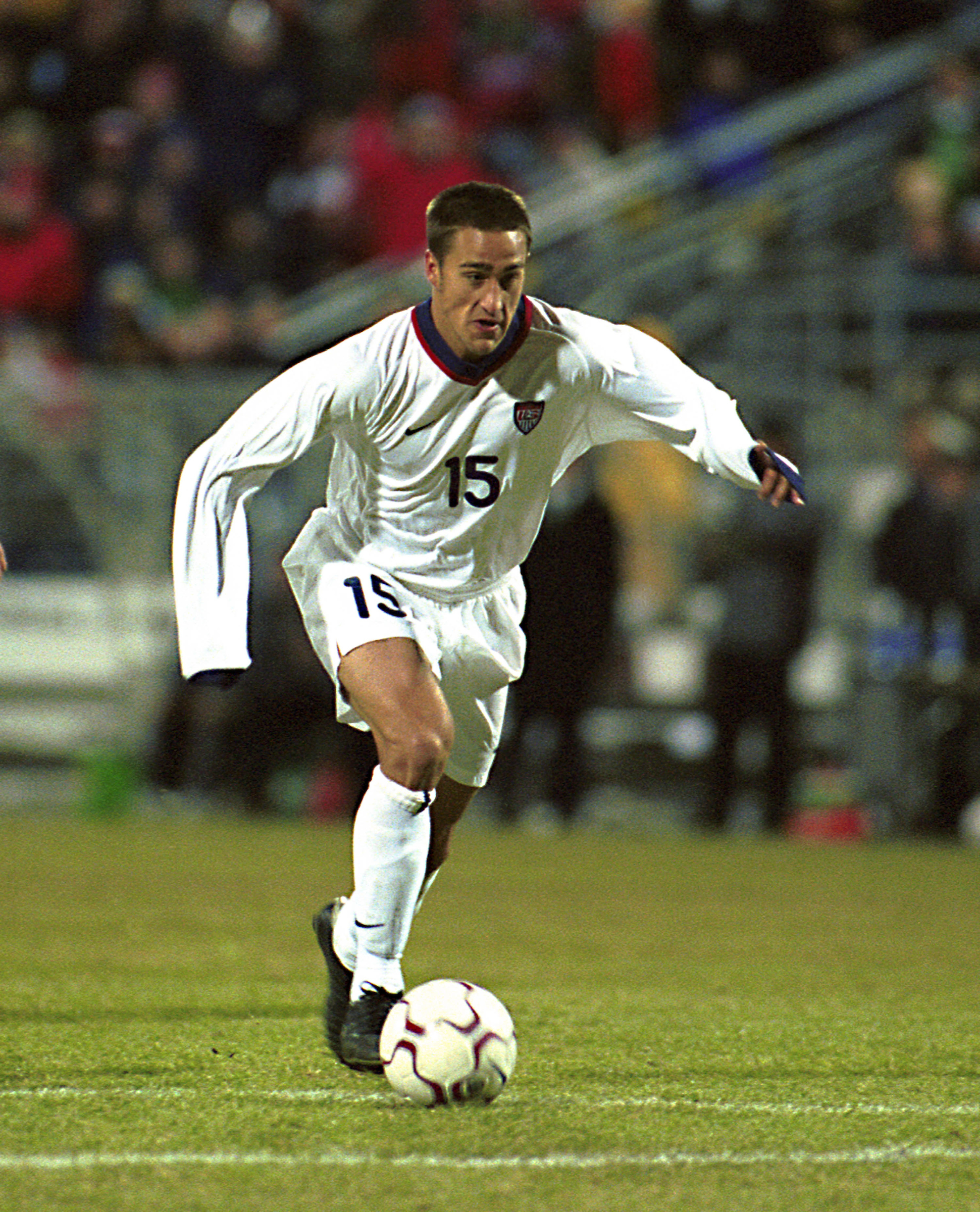 He turned playmaker in the 88th minute, beating defenders Claudio Suarez and Alberto Macias on the right side of the box and before finding Earnie Stewart, who put the ball home from 12 yards.

Wolff said that coming on as a substitute helped him. "Really having not to think much probably was a good thing because you just go in react, rely on instincts," he said. "I was fortunate enough to play against Mexico in Los Angeles at the end of at the end of 2000. So, there was some familiarity there. Certainly, competing against Mexico, whether it was a hostile crowd or a home crowd."

Donovan, 18 at the time, had a front row seat on the U.S. bench to the proceedings, witnessing one of the signature moments in USMNT history. The atmosphere left an indelible impression with him.

"I had never seen a crowd like that rooting for an American team," he said. "It was just so eye opening for me at a young age. That certainly holds a special place in my heart even though I wasn't even on the field that day."

Four years later, Steve Ralston and DaMarcus Beasley’s tallies lifted the USA to another 2-0 win against Mexico, a result that came with the added bonus of clinching qualification for the 2006 FIFA World Cup. 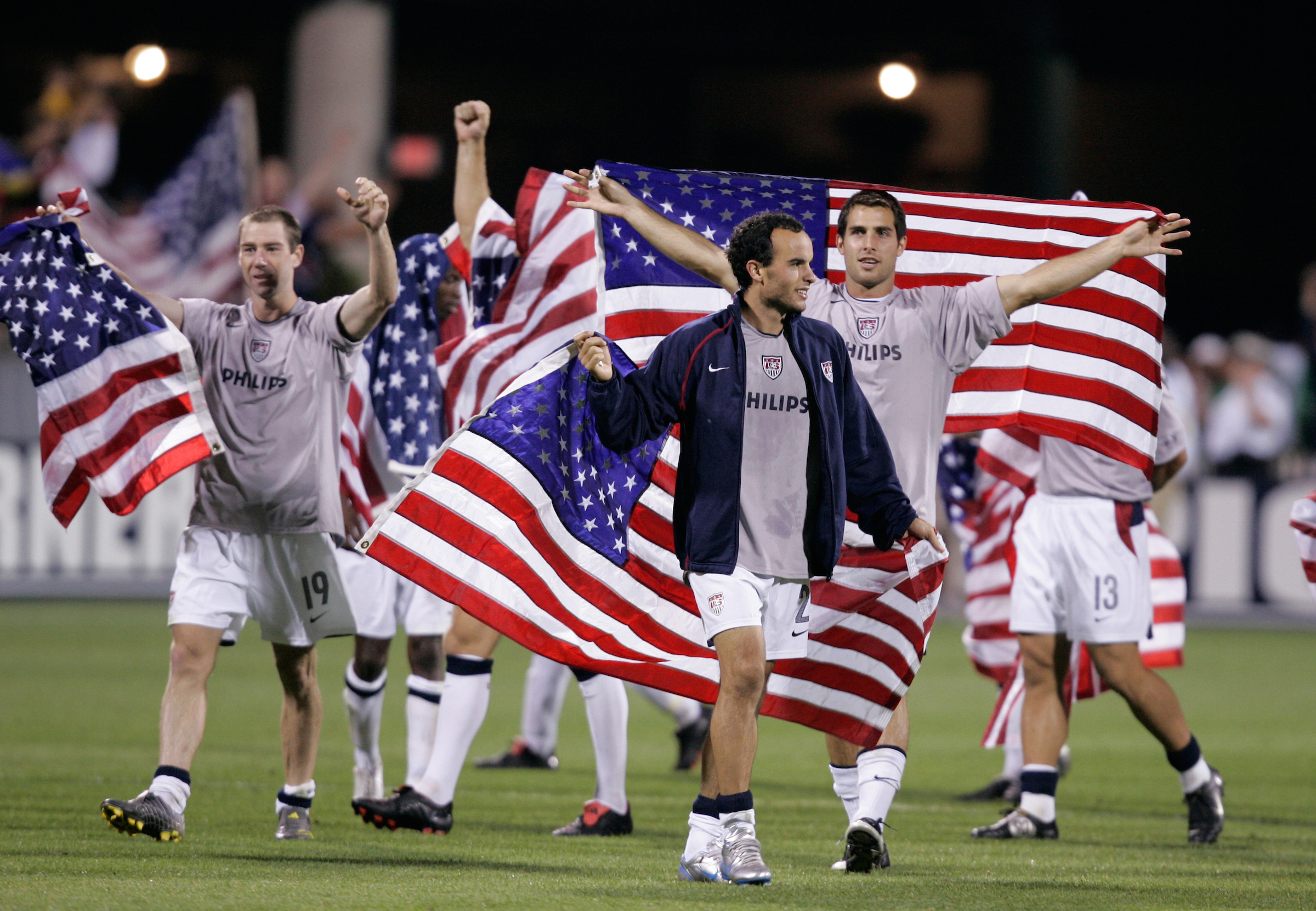 In 2009, Michael Bradley’s brace helped the USA to a third-consecutive “Dos a Cero” home qualifying win against Mexico to open the final round of qualifying with another 2-0 victory.

The “Dos a Cero” tradition against El Trí continued in 2013 as the USMNT again booked a spot at the World Cup with a 2-0 triumph against their rivals. Donovan had a big say in that match as his corner kick set up the first goal by Eddie Johnson in the 49th minute before he celebrated his own in the 78th minute. Goalkeeper Tim Howard produced some stellar saves late in the first half when it was still scoreless.

"Anytime you win a game to qualify for the World Cup, and it happens to be against Mexico, it's hard to top that," Donovan said. "That was a very memorable night."

In 2016, Mexico broke the streak, using a last-minute header by Rafa Marquez to earn a 2-1 win against the USA in the opening match of the final round of 2018 FIFA World Cup Qualifying.

Beyond the wins against Mexico, Columbus has also served as a welcoming place for the team to recover after difficult road results.

Only four days after losing an early lead and suffering a 2-1 semifinal round defeat at Jamaica on Sept. 7, 2012, the USMNT returned to Historic Crew Stadium, using Herculez Gomez’s 55th minute free kick to earn an emotional 1-0 win on the 11th anniversary of the Sept. 11 attacks.

The team faced a similar scenario during the semifinal round in 2016. A poor performance led to a disappointing 2-0 defeat in Guatemala, pushing the team’s back against the wall for advancement when it faced Los Chapines again four days later in Columbus.

The home crowd again provided the perfect backdrop to the USA’s resounding 4-0 thumping of Guatemala on March 29, 2016, a match that also marked then 17-year-old Christian Pulisic’s senior team debut.

While the streak against Mexico ended, Columbus’s importance to the USMNT continued last fall as the team hosted Costa Rica in its first match at brand-new Lower.com Field on Oct. 13.

In a similar situation to the 2012 matches against Jamaica, the USMNT landed in Ohio on the back of a 1-0 defeat at Panama.

Though the side surrendered a first-minute goal to Keysher Fuller, the boisterous Columbus crowd willed a thrilling comeback. The USMNT equalized behind Sergiño Dest's 25th-minute wonder strike  before the right back set up the game-winner in the 66th minute. The Barcelona defender sent a short pass to Tim Weah on the right side of the penalty area, where the Lille forward drilled a shot that hit the right post, then caromed off goalkeeper Leonel Moreira before entering the net. 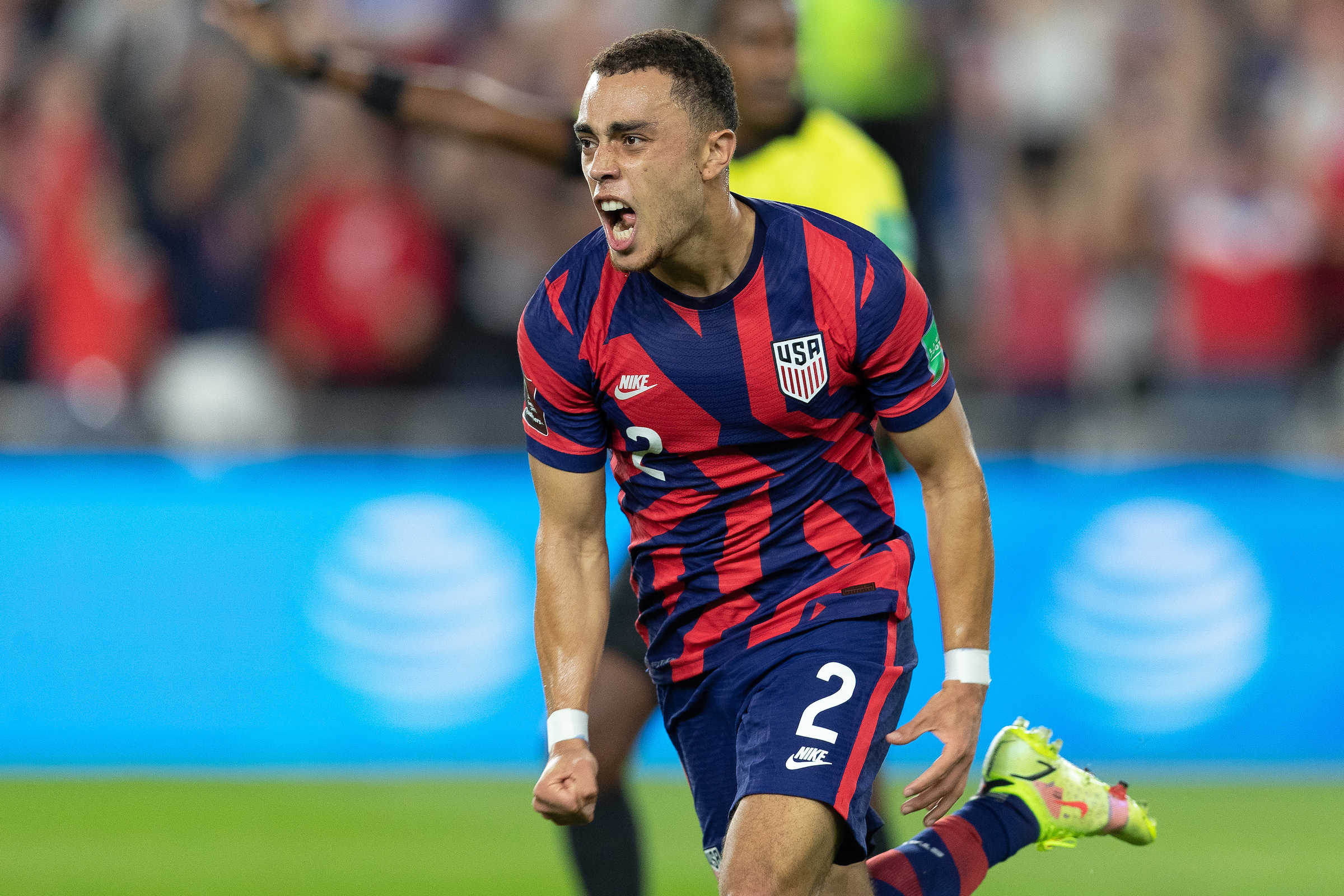 The tally went into the record books as an own goal by the keeper. Moreover, it gave the USA the win and three more important points on the Road to Qatar.

On Thursday against El Salvador, the USMNT will be prepared to build on their winning tradition at Fortress Columbus.